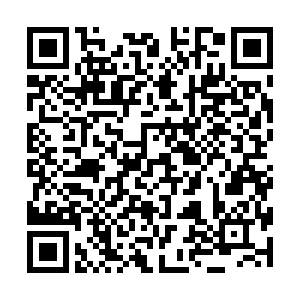 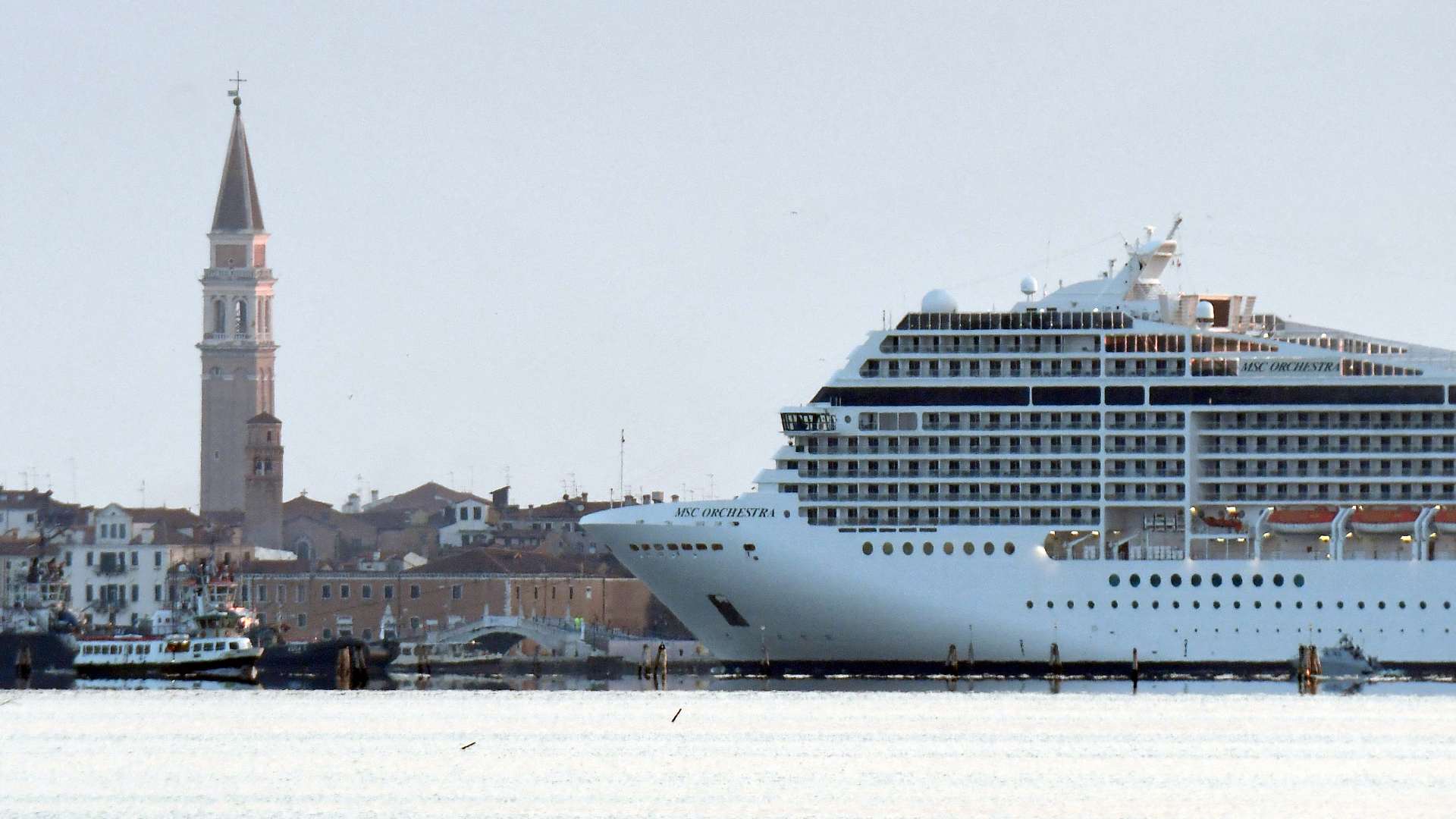 The cruise ship, the MSC Orchestra cruise, arriving in Venice, Italy on June 3. However, many are not happy about the return of the mega-ships, calling them an eyesore. /AFP/ Andrea Pattaro

The cruise ship, the MSC Orchestra cruise, arriving in Venice, Italy on June 3. However, many are not happy about the return of the mega-ships, calling them an eyesore. /AFP/ Andrea Pattaro

• For the first time in 17 months, a cruise ship has docked in Venice, Italy. However, environmentalists are not happy about its return, arguing that the large waves caused by the huge ships are eroding the foundations of Venice's historic buildings.

•Spain is reopening its doors to vaccinated tourists on Monday. An estimated 45 million foreign tourists are expected to visit the country this year, a large jump from the 19 million who visited in 2020, which was the lowest number since the 1960s.

• The CEO of Ryanair expects there to be unrestricted travel between the UK and the EU from July onwards, despite the UK removing Portugal from its quarantine-free 'green' list on Thursday.

• France is opening up again. From June 9 onwards, tourists can visit the country without a COVID-19 test if they are vaccinated and from another EU country. Tourists from the UK and U.S. will still have to take a test even if they are vaccinated. Other non-EU countries will be classified under a new color-coded system. Those from a "green" country will also benefit from the eased restrictions.

• Booking.com, an online travel agency, will give back around $70 million worth of COVID-19 aid to the Dutch government. The decision comes after a Dutch newspaper, NRC, reported that the company had given three senior employees a $34 million bonus after receiving the funds.

• Checkpoints linking Greek and Turkish sides of Cyprus have reopened for the first time since December 2020, when they were closed because of the pandemic. Before COVID-19, the nine checkpoints along the divide were used by thousands of people every day.

• Several countries, including Hungary, have approached Russia to make a deal to recognize each other's vaccination certificates, according to the Russian health minister.

• In Russia, a trial testing mixed doses of the AstraZeneca and Sputnik V vaccines has reported no negative side-effects, according to Interfax, a Russian news agency.

• The EU submitted a proposal to the World Trade Organization meant to tackle vaccine inequality without waving COVID-19 vaccine patents, countering the call from dozens of countries, including Africa, India, and the U.S., to suspend the producer's intellectual property rights.

• The heads of the World Bank and International Monetary Fund called on the G7, a group of seven advanced economies whose finance ministers are currently meeting in the UK, to donate COVID-19 vaccine to developing nations and to be more transparent about vaccine contracting and financing.

• The EU has bought 55,000 doses of a treatment for COVID-19 that relies on a cocktail of monoclonal antibodies, cloned white blood cells. The cocktail was developed by Swiss pharmaceutical company Roche and American biotechnology company Regeneron.

• And finally, over 2 billion doses of COVID-19 vaccines have been administered globally over the past six months, according to AFP. 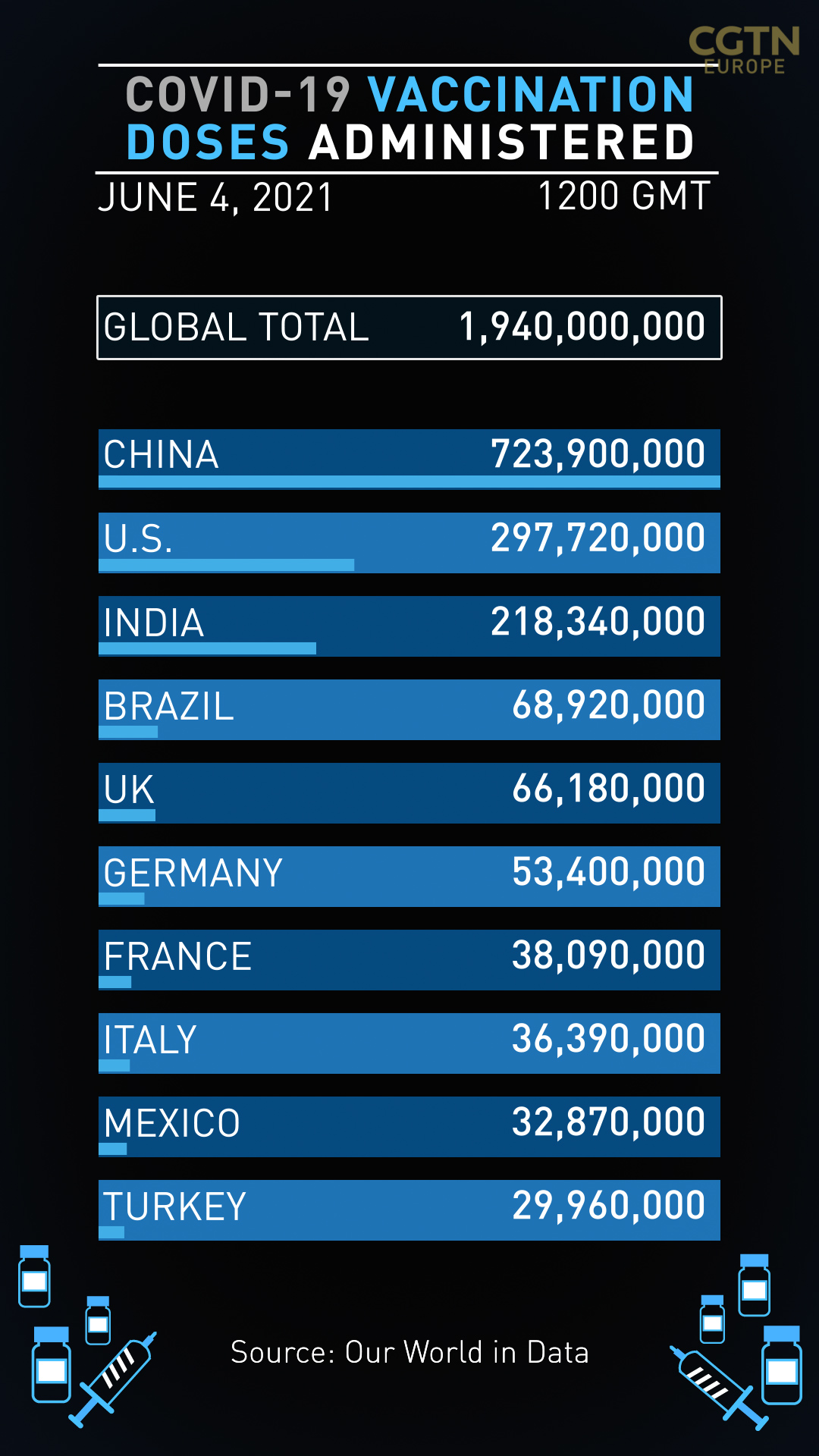 COVID-19 vaccination appointments will open up to everyone in Germany on Monday, ending six months of priority lists for people over 60 years old or those with a serious health condition.

Very few people who are not considered "at risk" have been able to get vaccinated despite a strong appetite for the jab after the Government announced easing of restrictions for people who have been vaccinated. Some have slipped through the cracks, but have become a target of shaming by politicians who have called them "vaccination free riders."

That includes a number of volunteer poll workers in Berlin who cancelled their registration shortly after getting an appointment for priority vaccinations. As Germany's Der Spiegel reported: "Some people's desire to serve democracy suddenly diminishes the moment they have the vaccination certificate in their pockets."

Officials say they are cracking down and warn that doing so could risk a fine of over $500.

Portugal's foreign ministry has said it cannot "understand the logic" behind the UK's decision to put the popular tourist destination on its amber travel list.

The move means anyone returning from the country will need to spend 10 days self-isolating at home and has British holidaymakers scrambling to get back before rules come into effect on Tuesday.

A new survey by professional services firm KPMG shows demand for workers in the UK rose at the fastest rate in May for more than 23 years. But, the number of people available to fill those roles fell at the quickest rate in almost 4 years.

Many of the vacancies are in the hospitality sector, which has reopened in recent weeks after months of COVID-19 enforced closures.

More than 51 percent of France's population has now received at least one COVID-19 vaccination.

French president Emmanuel Macron stands by the decision not to make vaccinations compulsory after he was asked about obligatory shots on Thursday. He said that he does not think the move would be required "at this stage" because "more and more people" are getting a vaccine.

A survey carried out at the end of May shows that 65 percent of adults aged 18 years or older would like to receive a coronavirus vaccination. The number of skeptics who would not take a shot fell as well - down to 10 percent from previous polls earlier in the year.

CGTN Europe: How recyclable are plastics and where do they go when they leave our bins?