EC President Ursula von der Leyen said differences between the two trading powers must not be 'brushed under the carpet.' /AFP

EC President Ursula von der Leyen said differences between the two trading powers must not be 'brushed under the carpet.' /AFP

Brussels on Wednesday tried to pour cold water on a report that the European Union-China investment deal had been put on ice amid tit-for-tat sanctions and a souring of relations.

Trade Commissioner Valdis Dombrovskis said technical work to "prepare the ground for the ratification" of the deal was still ongoing.

But he added that the process cannot be separated from the evolving dynamics of the wider EU-China relationship.

"In this context, Chinese sanctions targeting, among others, members of the European Parliament and even an entire parliamentary subcommittee are unacceptable and regrettable," he said during a press briefing in Brussels. "The next steps concerning the ratification of the investment agreement will depend on how the situation evolves."

On Tuesday night, an AFP report implied ratification of the Comprehensive Agreement on Investment (CAI) had been suspended.

Dombrovskis's communication adviser Vanessa Mock clarified on Twitter that no "formal suspension decision" had been made, but that political outreach to promote the deal wasn't taking place. 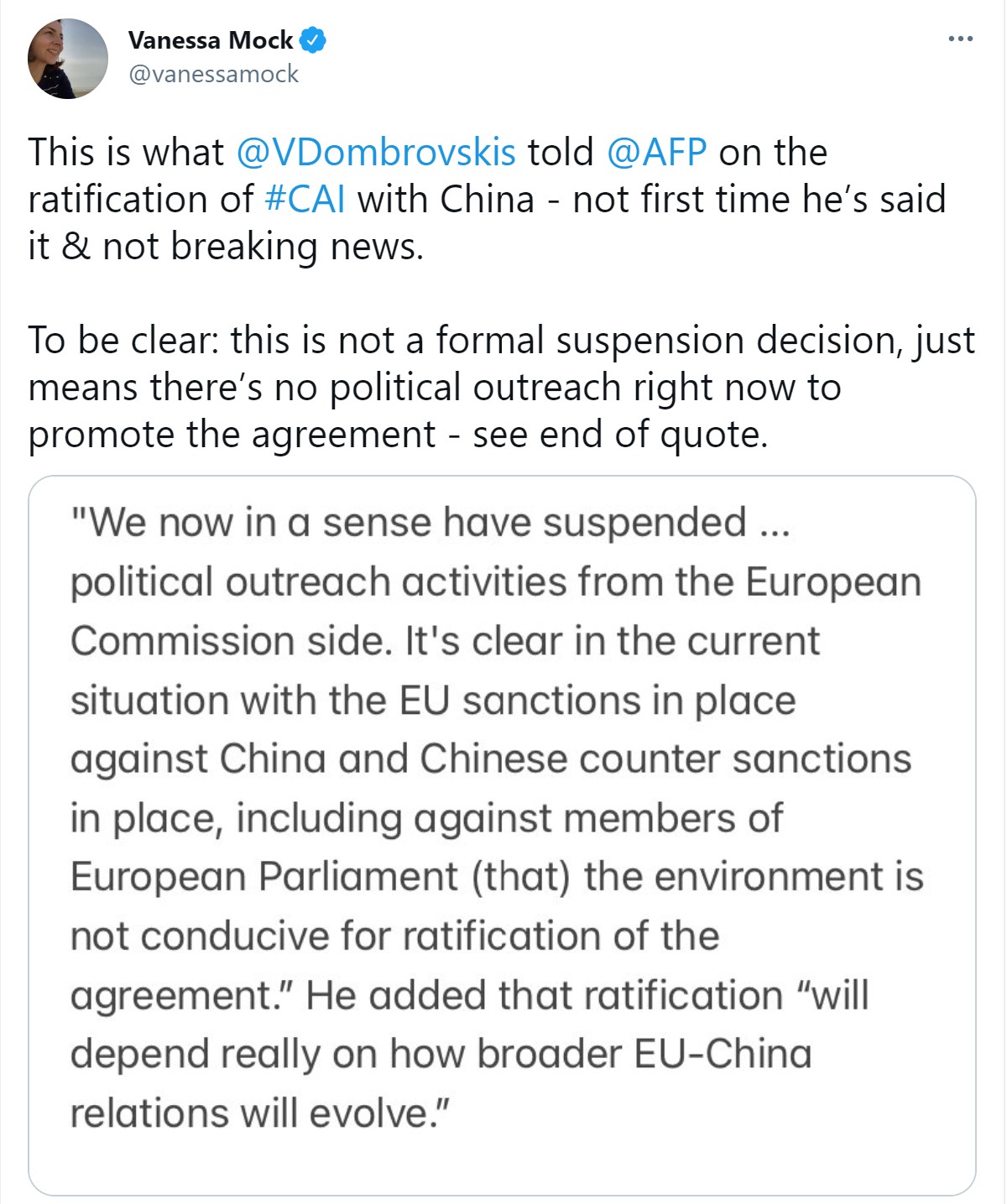 In March, the EU imposed sanctions on four Chinese officials and one entity over alledged human rights concerns in Xinjiang. Beijing quickly fired back, imposing its own sanctions on 10 Europeans, including five members of the European Parliament (MEPs) and four entities.

After seven years of negotiations, the CAI was agreed in principle in late December, but always faced an uphill battle in the European Parliament.

Germany's Chancellor Angela Merkel, who was a driving force behind the deal, said on Wednesday that despite issues with its ratification, the investment deal was a "very important undertaking," because it gives more "reciprocity in market access."

The CAI would grant new investment opportunities and level the playing field for both Chinese and European businesses. 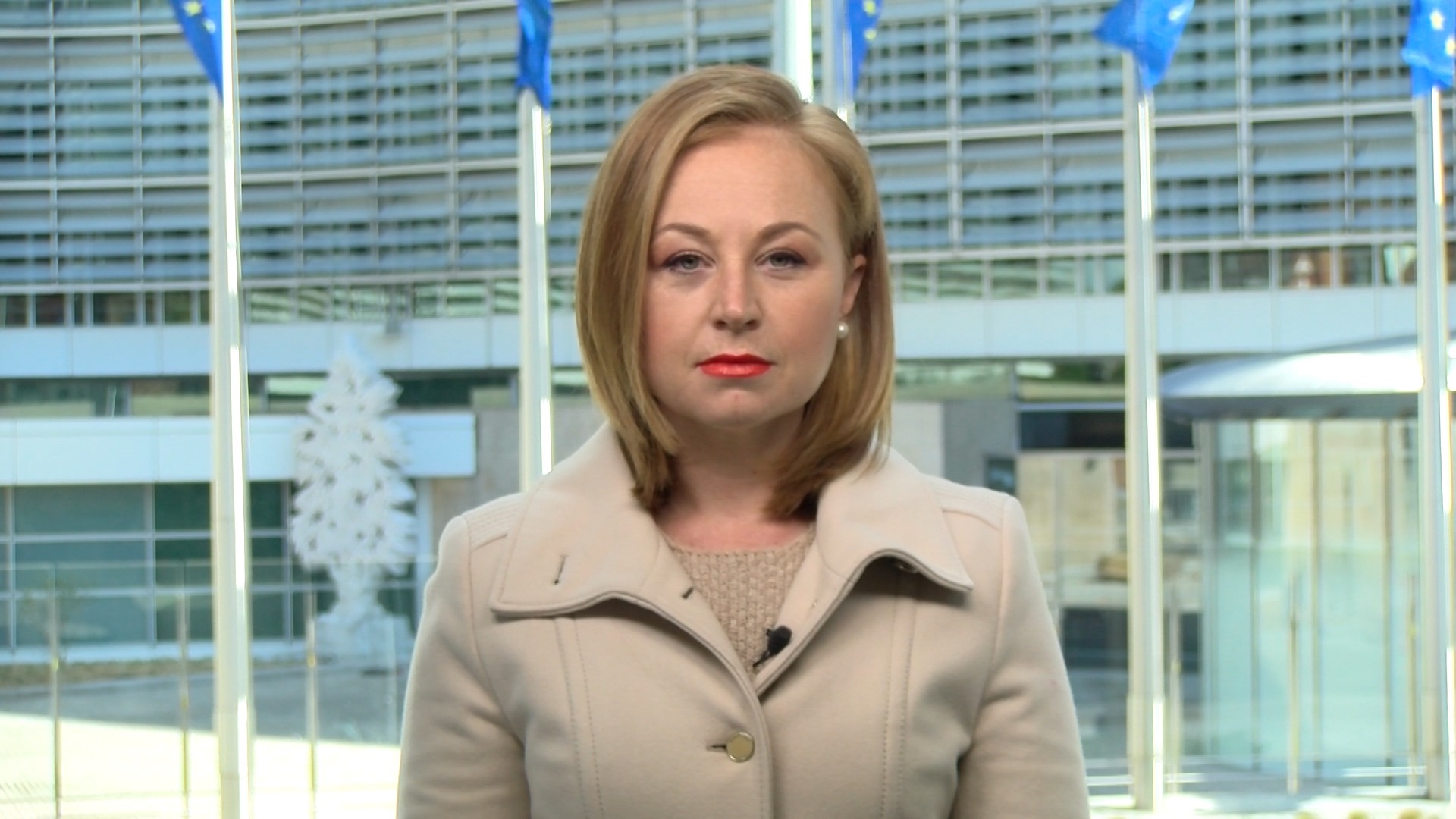 The EU also unveiled plans on Wednesday to slash Europe's dependency on China and other foreign suppliers in six strategic areas, including batteries, pharmaceutical ingredients, semiconductors and cloud technology.

"Today's updated industrial strategy is about making sure our industries are equipped to drive the digital and green transformations of our economy while ensuring the competitiveness of our industries, also in the context of the recovery from the coronavirus crisis," European Commission Vice-President Margrethe Vestager said while unveiling the plan.

Brussels says it's planning an in-depth review of its supply chains but 137 critical products have been identified, mainly raw materials, and more than half of them come from China.

To reduce this dependency, Brussels said the bloc could start diversifying its trading partners, building out strategic industries closer to home or even stockpiling.

Brussels also announced plans to restrict takeovers from foreign companies that receive government subsidies. The proposed regulation would give Brussels the power to investigate and potentially block deals. Companies that fail to comply with investigations or fail to disclose information could be fined up to 10 percent of their global turnover

"We want every company that operates in Europe, no matter where it comes from, to respect our house rules," Vestager said.

While the proposal does not single out any country or industry, it is believed the regulation would have an impact on Chinese firms.