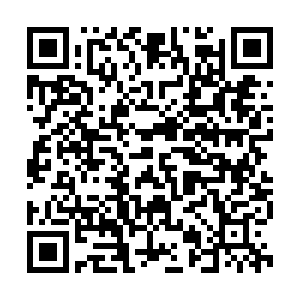 Four weeks ago, CGTN Europe analyzed France's efforts to fight off COVID-19 without a full lockdown – but by the last day of March, President Emmanuel Macron was forced to resort to a third nationwide closure. What changed?

Quite simply, to quote France's Prime Minister Jean Castex at the National Assembly on Thursday morning: "The third wave is here." That's clearly illustrated by the Johns Hopkins figures from Our World In Data.

As late as March 6, France's rolling seven-day average of new cases was 20,936 – far from perfect, and indeed far from the 5,000 daily target he had set in late October.

Macron set that benchmark when starting a second lockdown on October 30, saying France must "brutally apply the brakes" to avoid being "submerged by the acceleration of the epidemic." And it worked pretty well – a four-week shutdown cut cases from 50,000 a day to 10,000.

Buoyed by that progress, Macron ended the second lockdown in late November, confident that "we have passed the peak of the second wave." He was right about that – new cases dropped to 10,498 on December 4 – but sadly he was also correct in predicting: "We still have several weeks in front of us."

Macron will have wanted those weeks to be spent in careful pandemic management without choking off the economy, hopefully while nudging those daily case rises ever lower. But the daily numbers continued to rise. 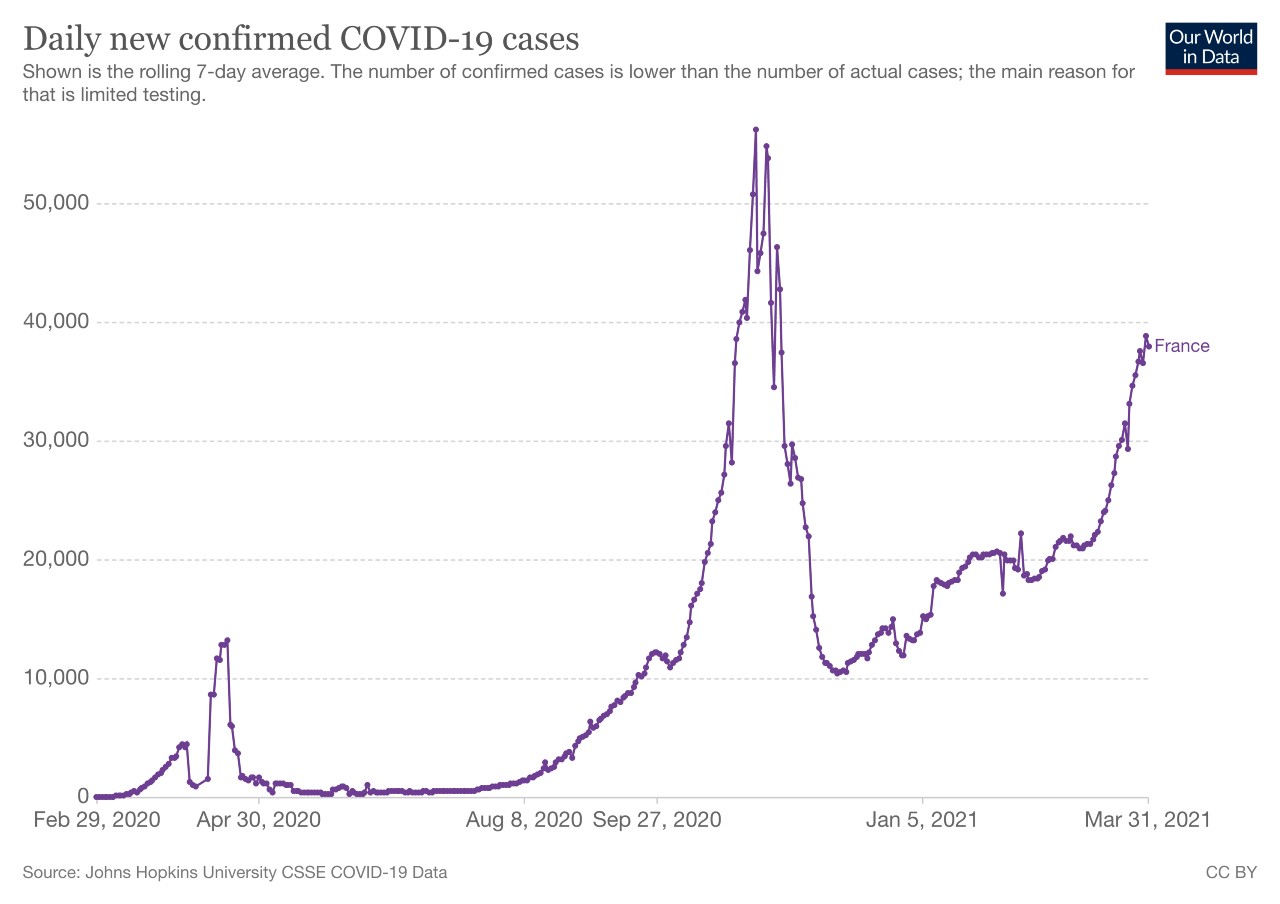 Instead, France hasn't been below 5,000 daily cases since August. From almost dropping through the 10,000 barrier in early December, France broke past 20,000 on January 23 and hovered around that mark until early March, with the relative stability allowing Macron to resist pressure to lock down again.

However, in the past month France's case rate has all but doubled, passing the 30,000 mark on March 21 and rising to 38,915 on March 30. Moreover, remember those figures are rolling seven-day averages: On March 31, France registered 59,038 new cases, and the government had no option but to lock down again, closing schools and shuttering non-essential shops.

While lockdown is the big short-term lever to pull, vaccination is obviously the long-term answer... not that Macron wants to take it slowly.

Having last week criticized the pace of the EU's roll-out – saying: "We were wrong to lack ambition … we didn't shoot for the stars" – he set his country a tough target this week. Speaking to Le Journal du Dimanche newspaper, Macron confidently predicted: "In a few weeks we will have completely caught up with the British."

For that to happen, France has got a lot of catching up to do, and quickly. The below graph might seem impenetrable, but that's to illustrate the point: with 15.72 jabs administered per 100 people, France is lower mid-table in Europe's standings and far below the UK's 51.58. 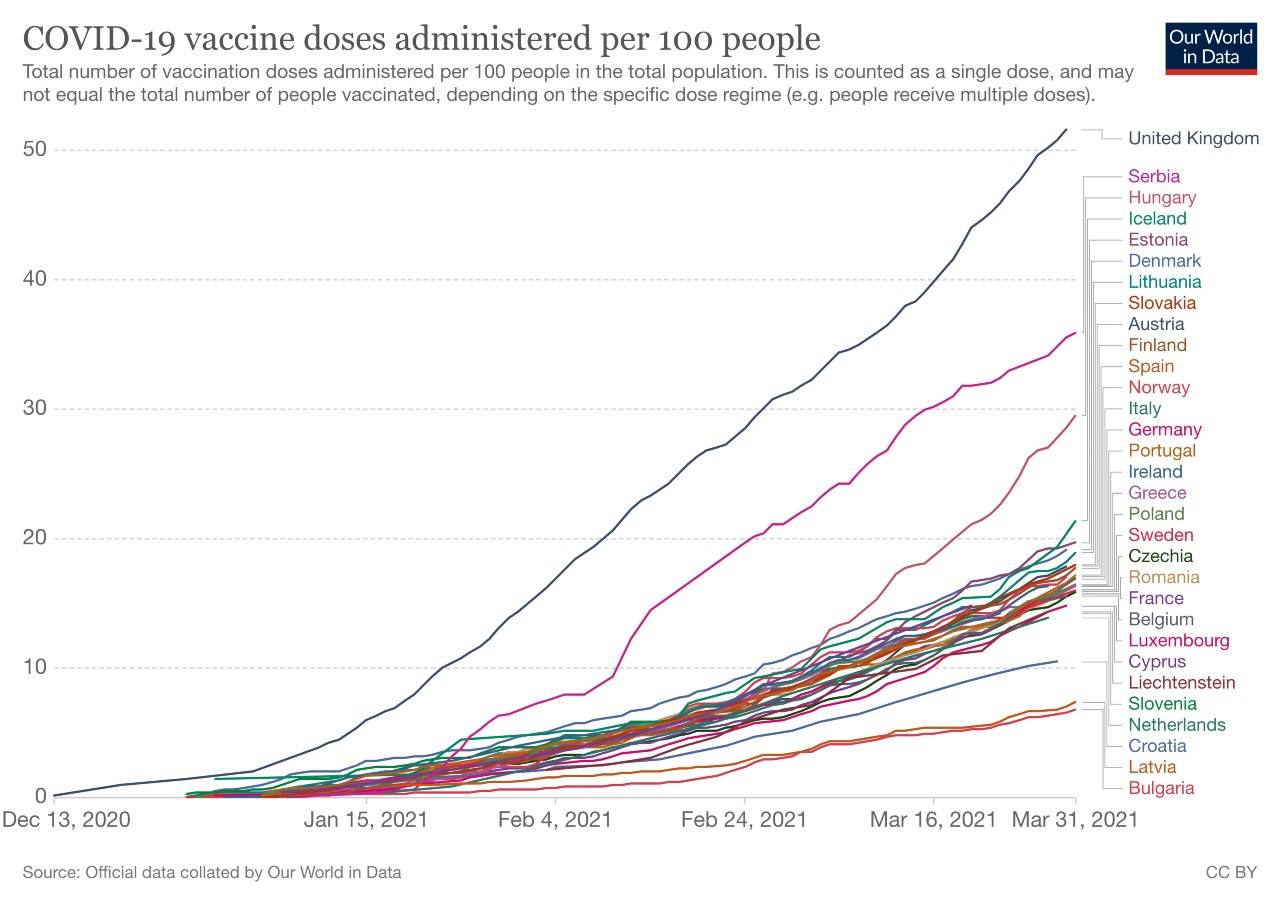 True, the British success story is the outlier, and the only other European countries to break away from the pack – Serbia with 35.92 per million and Hungary with 29.53 – have also taken the opportunity to operate outside the EU's troubled collective vaccine acquisition program.

But closing the gap to the UK's current percentage coverage will require some serious jabbing. At the last count, Britain had delivered 35 million vaccinations to France's 15.72 million.

Even to reach the UK's current number would require 20 million vaccinations – half a million every single day for 40 days, and France is yet to administer more than 393,000 in any given day, while the UK's peak productive day was 844,000. 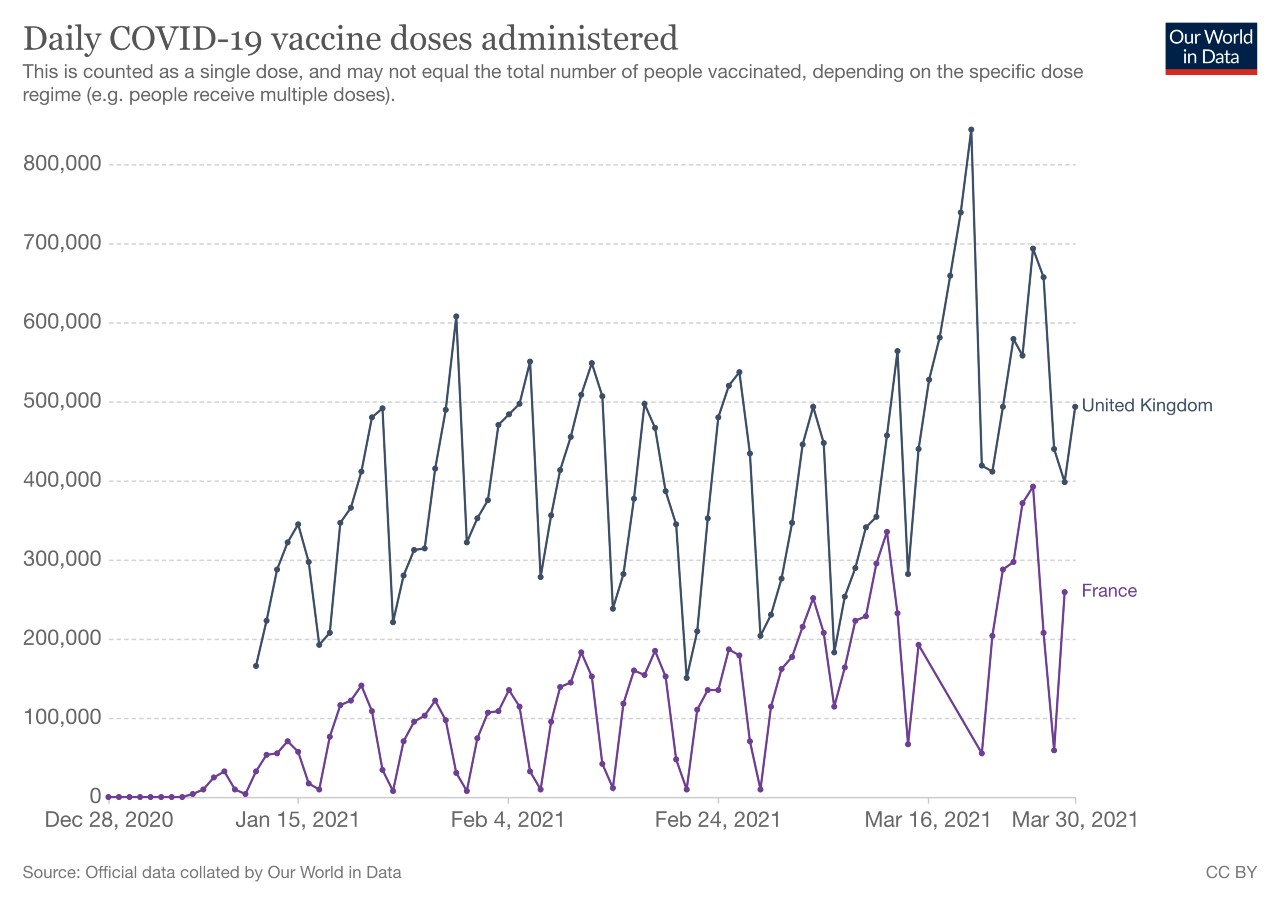 Macron's prediction that the UK will be "increasingly dependent on us to vaccinate their population" – yet another reference to the distribution quarrels that have dogged the roll-out – suggests he's expecting the vaccination rate in the UK to slow down, but that doesn't exactly help France out of a third lockdown... or make space in French hospitals.

In his television address announcing the third lockdown, Macron insisted: "We will lose control if we do not move now." His critics and lockdown proponents may fear that moment has already passed.

On Tuesday, March 30, France passed upwards through another 5,000 figure: the number of COVID-19 patients in its intensive care units (ICUs). The second wave came close (peaking at 4,903 on November 16) but never quite broke through that solemn mark, and after falling to 2,573 on January 7, has been inexorably climbing since. 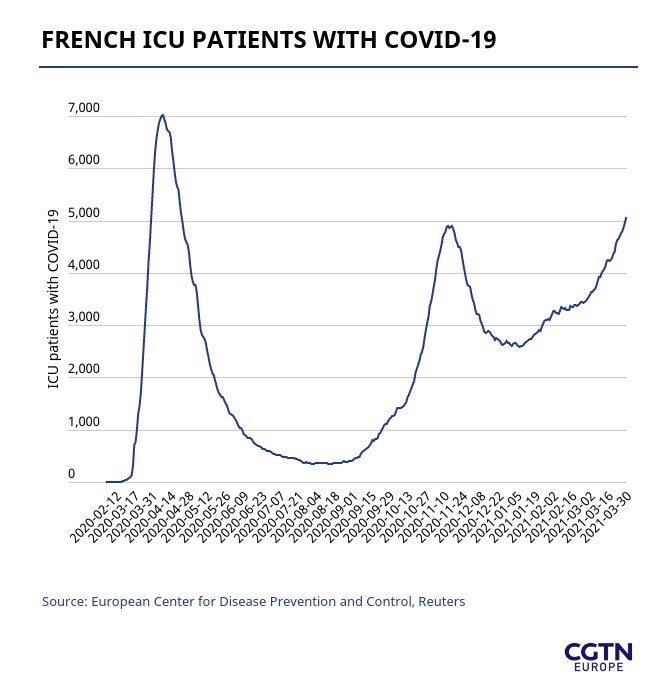 France's Health Minister Olivier Veran predicts the third wave's peak is only seven to 10 days away. How the country deals with that will have a great effect on the saddest chart of all: The daily numbers of deaths from COVID-19.

Although deaths are a lagging indicator of a breakout – in most cases, it takes time to die from COVID-19 – the third wave is now well enough established that more than a few European countries are experiencing rising numbers, and France is one of them. 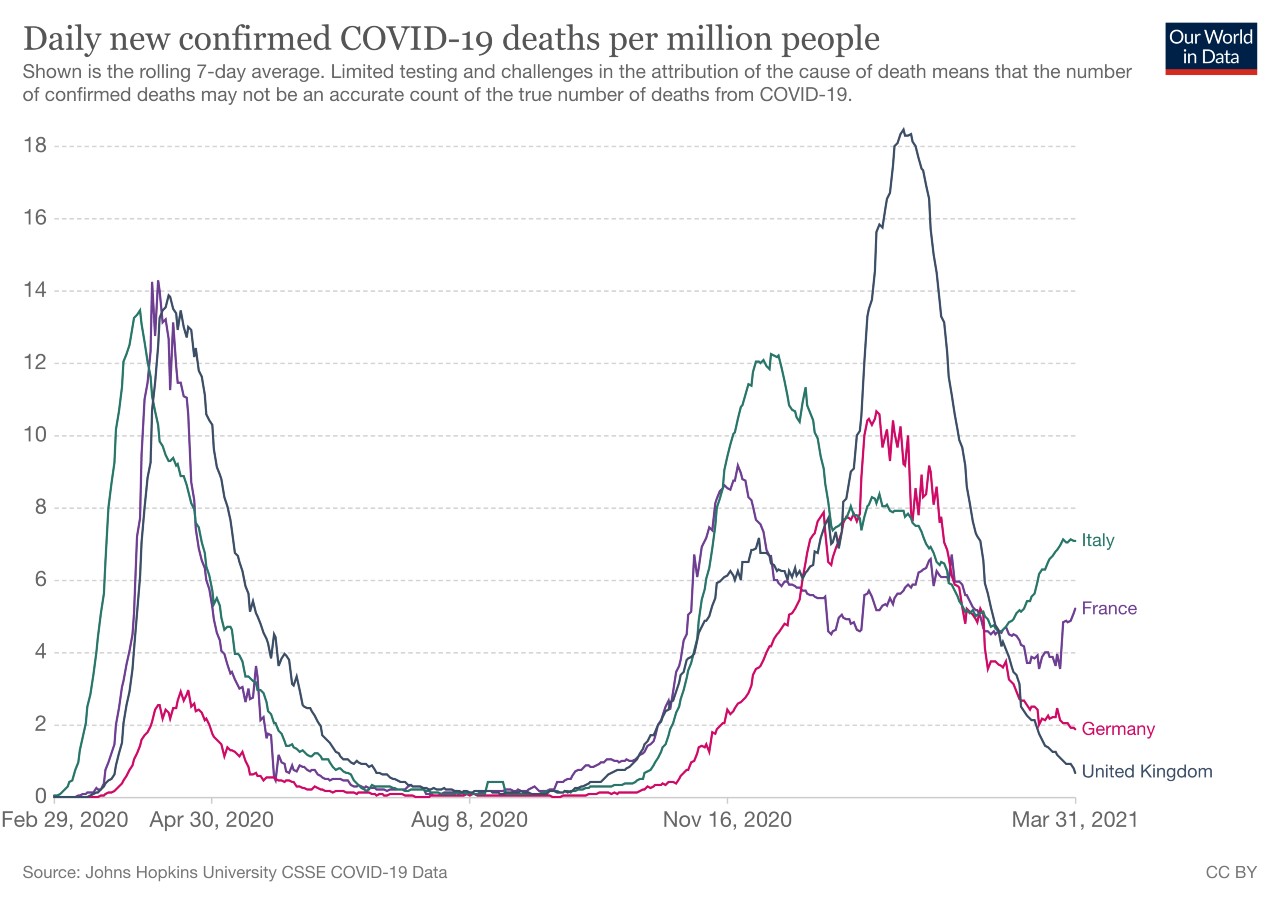 France's daily deaths have now risen back above five per million, having spent most of November, December, January and February above that mark before dipping back down five weeks ago.

But the worry is now not so much whether the third wave will arrive as how high it will be – and whether the death chart will solemnly follow the case curve and ICU loads.

On March 31, Hungary announced 26.4 deaths per million, Bosnia and Herzegovina 23.16, North Macedonia 16.18 and Czechia 15.51 – and in each country's case the third wave has caused a higher peak of daily deaths than the second. Macron, and all of France, will be hoping the same does not apply.