Download
Suez Canal: How did a ship get stuck, and what happens next?
Patrick Atack 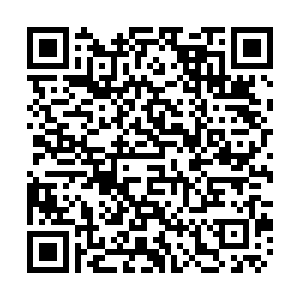 The Ever Given container ship was partially refloated and nearly freed early on Monday, raising hopes that traffic in this vital maritime artery will be soon resumed.

Efforts by salvage teams to free the ship stuck in the Suez Canal since Monday March 22 were facilitated by the high tide, but officials report that the bow, the front part of the Ever Given, remains stuck at the edge.

Authorities estimate that the next high tide, expected by 11:30 a.m. local time, will allow salvage teams to free the ship fully. But even once vessels are allowed through the canal once again, the week-long blockage's knock-on effect to world trade is likely to amount to billions of dollars.

On Monday March 22 the Ever Given container ship – at 400 meters, longer than the Empire State building is tall – ran aground in the Suez Canal, on its way from China to the Netherlands.

The reason for the accident is unclear, with the ship's owner saying it was caught by a gust of wind, but the Canal Authority saying "human error" may have been a contributing factor.

Since then, the Suez Canal Authority and Dutch salvation firm Boskalis have been working on freeing the 200,000-ton ship by digging and dredging the canal banks and bottom, while at least a dozen tug boats have been trying to pull it loose. 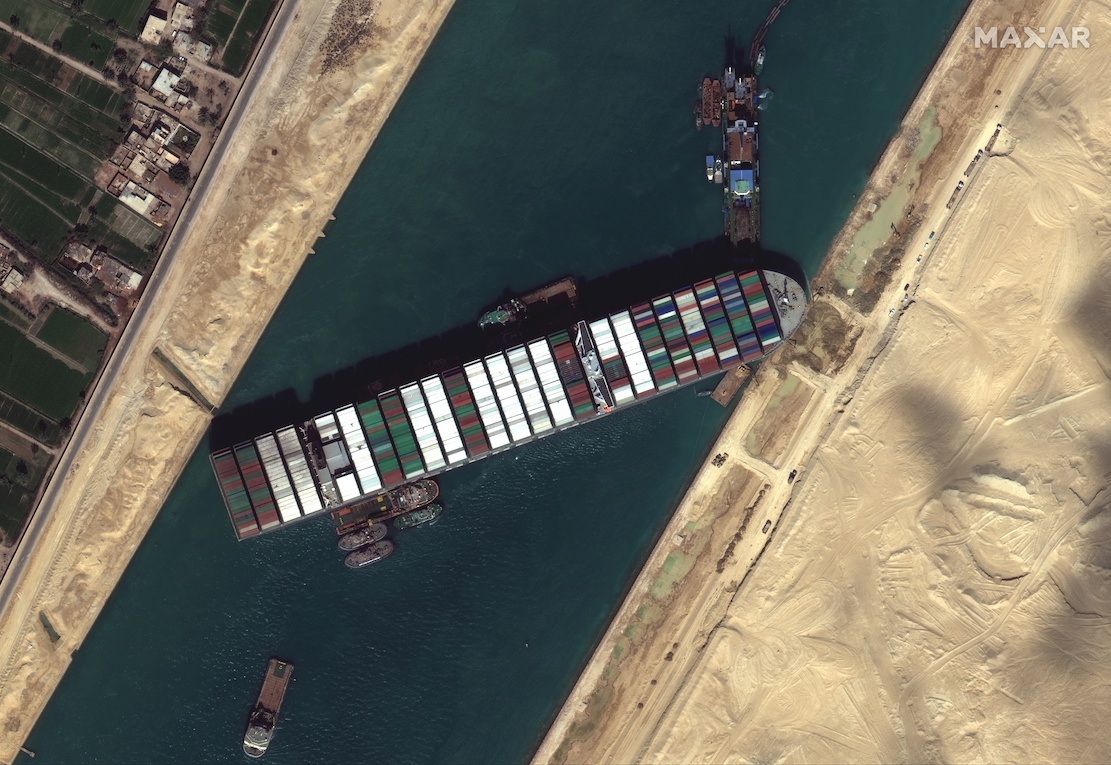 Early on Monday, the Suez Canal Authority has announced that the Ever Given has been partially refloated after the back of the container ship was moved away from the banks of the canal.

The front of the 220,000-ton ship remains partially stuck, but salvagers hope the spring high tide will facilitate operations and allow for the entire ship to be freed soon as the canal's waters swell.

Divers inspecting the container ship during this delicate task have found no damage in the Ever Given.

What is the Suez Canal?

The Suez Canal is a 193-kilometer man-made route through Egypt, connecting the Mediterranean and the Red Sea to create a crucial shortcut for freight shipping between Asia and Europe. It cuts the journey by 8,900 kilometers and as much as three weeks.

As a result, it's one of the busiest waterways anywhere in the world with an average of 51 ships passing through each day, amounting to as much as 10 percent of all global trade annually.

Running north from the port city of Suez, situated on a tributary to the Red Sea, the canal connects existing rivers and lakes to create a route to Port Said on Egypt's Mediterranean coast.

The canal took 10 years to build and was opened in 1869. The ownership of the canal has been the source of tension between Egypt and former colonial powers France and the UK.

That culminated in the 1956 Suez Crisis when, after Egyptian President Nasser had nationalized the canal, his country was invaded by Israel, France and the UK.

The canal is now owned and operated by the Suez Canal Authority (SCA), which is a government body. 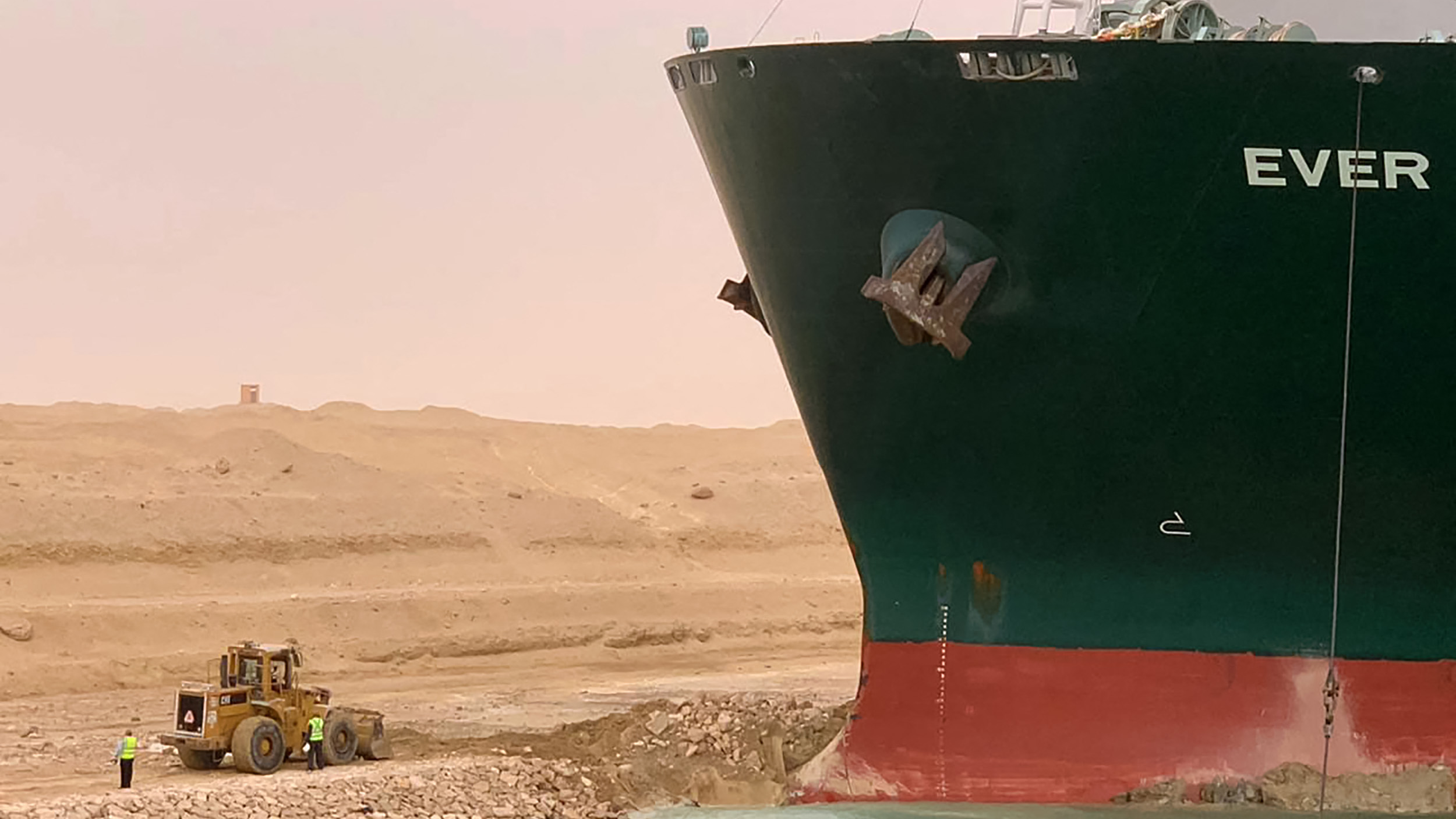 The huge ship dwarfs the digger trying to free it. /AFP

The huge ship dwarfs the digger trying to free it. /AFP

How significant is it to world trade?

Very. The canal carries as much as 10 percent of globally-traded goods every year.

Around 50 container ships, each carrying as many as 20,000 containers, use the canal every day. According to the International Chamber of Shipping, that's $9 billion worth of goods, 365 days a year, or $400m every hour.

And disruption to fuel supplies and trade is likely to affect markets around the world.

The SCA charges $700,000 for passage of the canal, and its CEO Osama Rabie said Egypt was losing $14m every day the canal is blocked.

What is being done about it?

At least 12 tug boats have been working to push and pull the ship to dislodge it from the banks of the canal.

There is also a dredging boat which is removing material from the bottom of the canal.

At the start of last week, pictures went viral of a digger trying to free the bow of the huge ship dwarfing it.

Ballast has also been removed from the vessel – that's materials loaded onto the ship to aid its balance and stability when sailing. But the so-called "Plan C" was to remove some of the containers the ship is carrying, in order to lighten its load and refloat the vessel.

Thiswas widely seen as a last resort, because it's incredibly difficult to remove the containers outside of a port. Each 30-meter-long container can weigh up to 30 tons, requiring a specialist crane which could raise its load to at least 60 meters.

Local authorities said organizing and completing such an operation could take weeks.

How will the Belt and Road help?

The crisis has made logistics firms think seriously about the best route from Asia to Europe for the first time in 150 years.

Before the canal was built, most seaborne trade between the two continents had to travel south, around the Cape of Good Hope – the most southerly tip of Africa – and back north again.

But the Chinese Belt and Road Initiative has resurrected the ancient land route with a network of roads and trains stretching from Beijing to London.

The number of freight train journeys between China and Europe has increased seven-fold since 2016, including a 50 percent rise in 2020 alone.

It could prove an attractive alternative for businesses that don't want to risk adding a significant extra leg to their routes if problems at Suez persist or repeat. 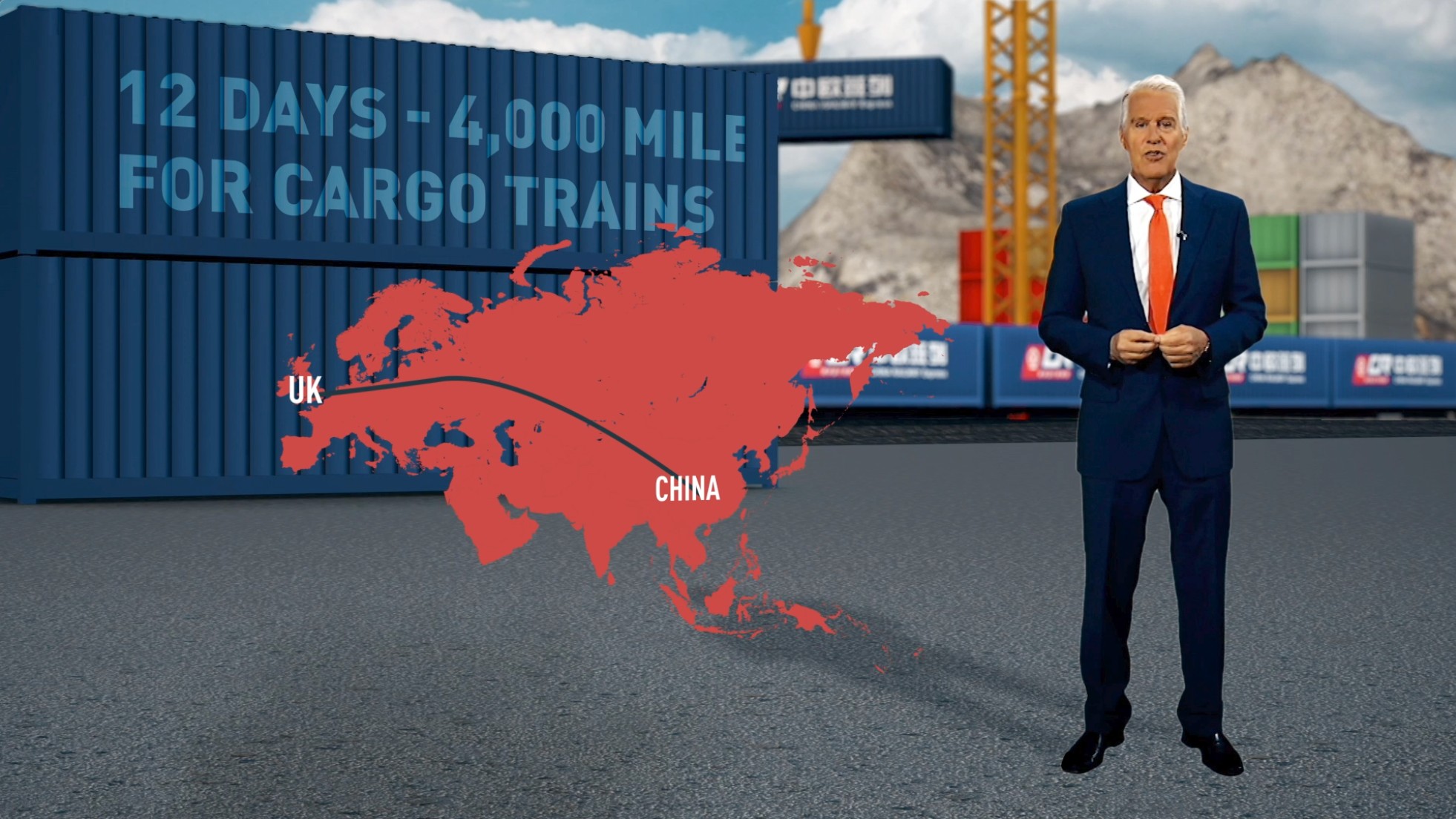 The Belt and Road could be an attractive alternative to Suez shipping. /The Agenda/CGTN

The Belt and Road could be an attractive alternative to Suez shipping. /The Agenda/CGTN

Could this happen again?

Although accidents like this are rare, one operator told CGTN Europe modern developments in the shipping industry could make container ship incidents more a regular occurance.

"One might be able to question this new era of super-maxed outsize vessels carrying 20,000 20-foot equivalent containers," said Oliver Chapman, Group CEO of OCI. "It's really big, and Maersk have a huge fleet of supersized tankers and container vessels."

"Of course, that oversize container vessel now has caught the wind and has been blown off course," he explained. "We've got to ask ourselves the question, what significant impact could this have on other scenarios in the future?"

The Suez Canal is not the only such waterway that's become integral to world trade. The Panama Canal is an artificial 82-kilometer waterway connecting the Atlantic Ocean with the Pacific Ocean through the Central American country Panama.

In contrast to the Suez, the Panama Canal lifts ships 26 meters above sea level to the Gatun Lake and then lowers them back down again on the other side through a series of canal locks.

The last closure of the Panama Canal was a 17-hour suspension in 2010 caused by heavy rainfall and historic water levels in the canal. It was the first such closure since the U.S. invasion of Panama in 1989.