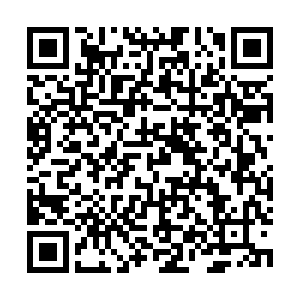 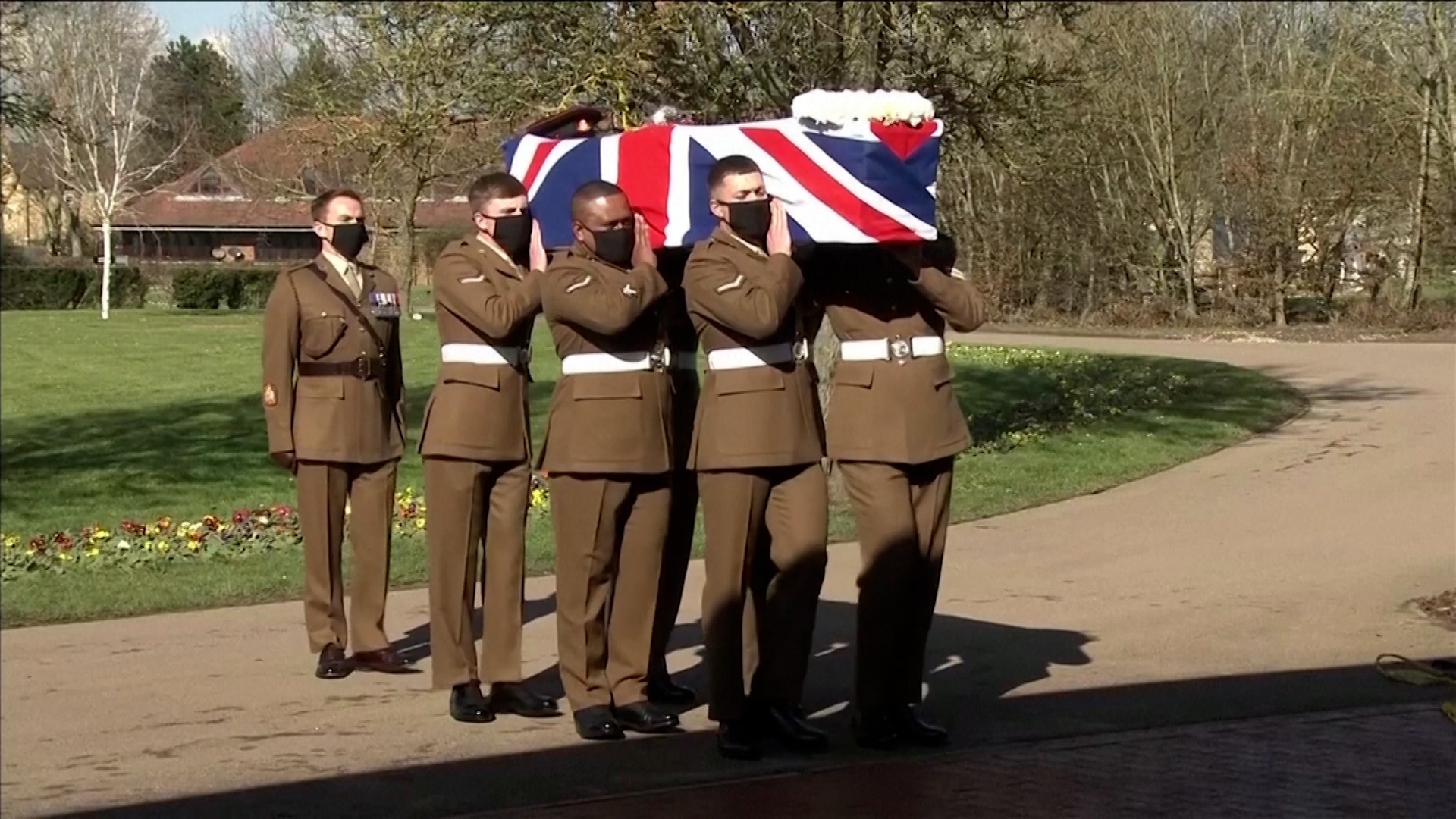 A military guard of honor and Royal Air Force fly-past marked the funeral on Saturday of Captain Sir Tom Moore, the World War II veteran who raised millions of dollars for the UK's health service during the coronavirus pandemic.

The 100-year-old became a global hero for his extraordinary efforts to keep spirits up during the COVID-19 crisis.

Soldiers formed a guard of honor at the small ceremony held by Moore's family at a crematorium in Bedford, central England.

Six soldiers from the Yorkshire Regiment, the successor to the one Moore served in during World War II, carried his coffin draped with the Union Jack and his military cap and sword as 14 soldiers gave a firing salute.

A World War II-era plane from a nearby RAF base flew over the crematorium and later a bugler sounded The Last Post, followed by a minute's silence.

"The armed forces are immensely proud to contribute to the celebration of his extraordinary life of service," the defense ministry said in a statement.

Moore died on February 2 after being treated for pneumonia and testing positive for COVID-19.

He raised nearly $45 million for healthcare charities by completing 100 lengths of his garden before his 100th birthday in April last year.

The image of the stooped but dapper veteran, leaning on his walking frame and rarely seen without his regimental tie and shining military service medals pinned to his blazer, was a rare good news story in a gloomy year. 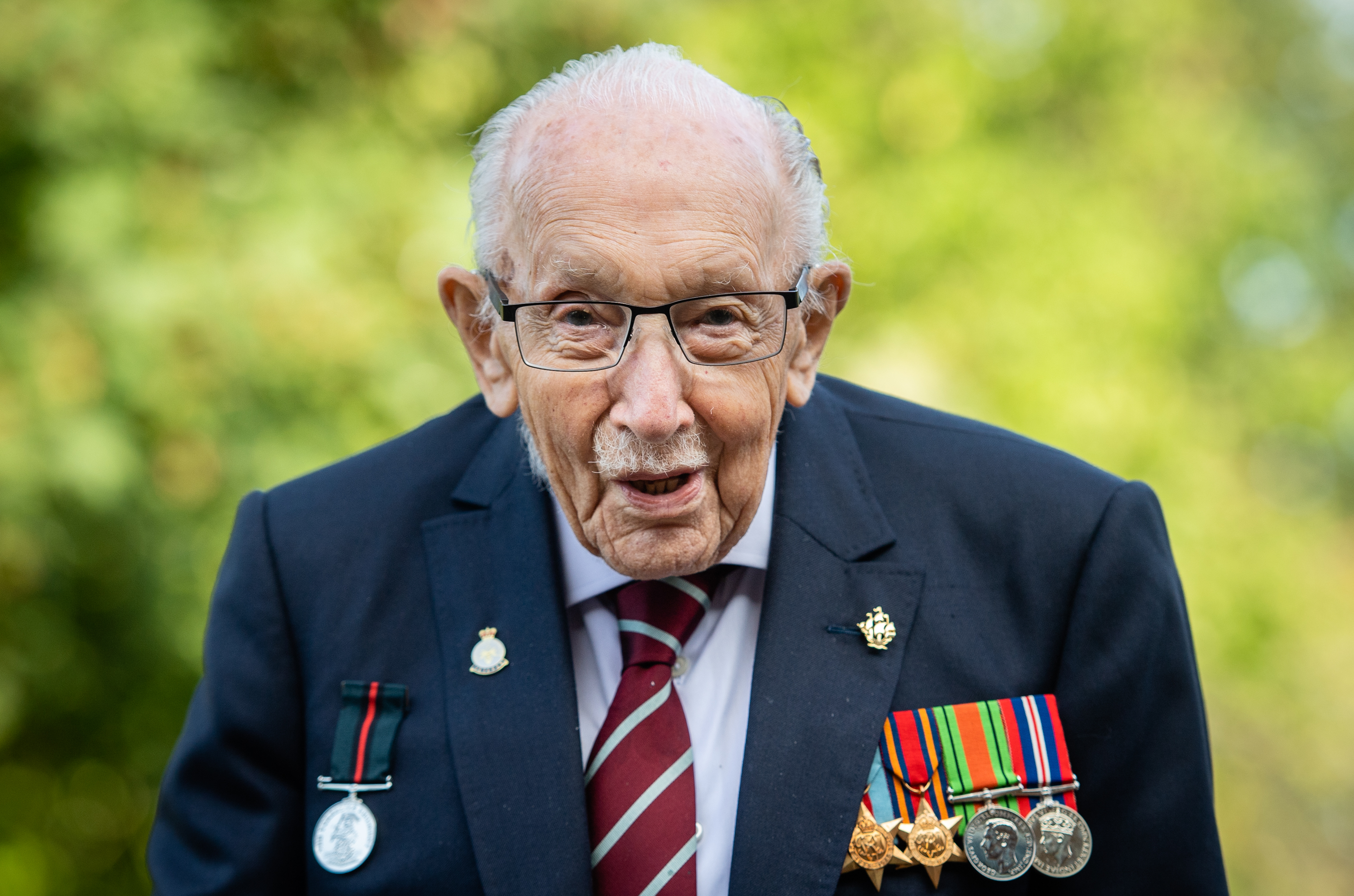 Queen Elizabeth II knighted him in the summer of 2020 and a wreath was laid on her behalf on Saturday at a war memorial in the town of Keighley in Yorkshire, northern England, where Moore was born.

His death was marked by a nationwide round of applause with Prime Minister Boris Johnson taking part and MPs bowing their heads in parliament.

His funeral was a more private affair, reflecting his family's wishes and anti-virus restrictions. Only his two daughters, four grandchildren and sons-in-law attended the simple ceremony.

"We never imagined what the last year of your life would be like," daughter Hannah Ingram-Moore said in her tribute. "In the last days and hours we had together, you talked with pride about the legacy of hope people said you had created."

His other daughter, Lucy Teixeira, said: "You may be gone but your message and your spirit lives on."

Moore's performance of You'll Never Walk Alone, a charity single that he recorded with Michael Ball, was played at the start of the ceremony and Frank Sinatra's My Way at the end.

Moore had asked for his epitaph to be "I told you I was old," inspired by comedian Spike Milligan whose gravestone says "I told you I was ill." The family set up an online book of condolences that gathered thousands of messages.