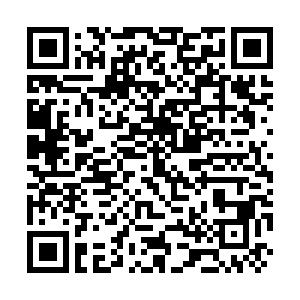 - UK Prime Minister Boris Johnson has said all the country's adults will be offered a first dose of a vaccine by the end of July as it seeks to speed up its vaccination program. One in three adults have already had at least one dose of a vaccine, according to Health Minister Matt Hancock.

- Serbia has received a shipment of 150,000 doses of the Oxford University-AstraZeneca vaccine, becoming the first Western Balkan country to receive the jab.

- Lorry drivers returning to France from the UK will now not need to take a test if they have spent less than 48 hours in the country, UK transport secretary Grant Shapps has said.

- Police in Amsterdam forcibly removed anti-lockdown demonstrators from the city's Museum Square on Sunday after they refused to leave amid a ban on public gatherings.

- Ireland's Prime Minister Micheal Martin has ruled out reopening its hospitality sector until at least the mid-summer, saying the infection rate remains too high. "Any easing of the restrictions has to be slow and cautious because of the threat from new variants of the disease," he added.

- Greece has reported a further 1,424 new cases in the past 24 hours, while fatalities also rose by 23, bringing the nationwide death toll since the start of the pandemic to 6,272.

- Malta will begin vaccinating teachers and other school staff next week, having pushed them up the vaccine list last month following a two-day strike during which they refused to hold online classes.

- Schools are set to reopen in 10 of Germany's federal states on Monday despite concerns over a rise in the country's infection rate, which many people fear could be the start of a third wave of the virus.

- The UK's Health Minister Matt Hancock believes that Britain is getting on top of an outbreak of the variant first discovered in South Africa as well as suppressing other strains. "The latest data shows that there's around a dozen new ones [variants], so a much, much smaller number, and each time we find a new one we absolutely clamp down on it," he said. 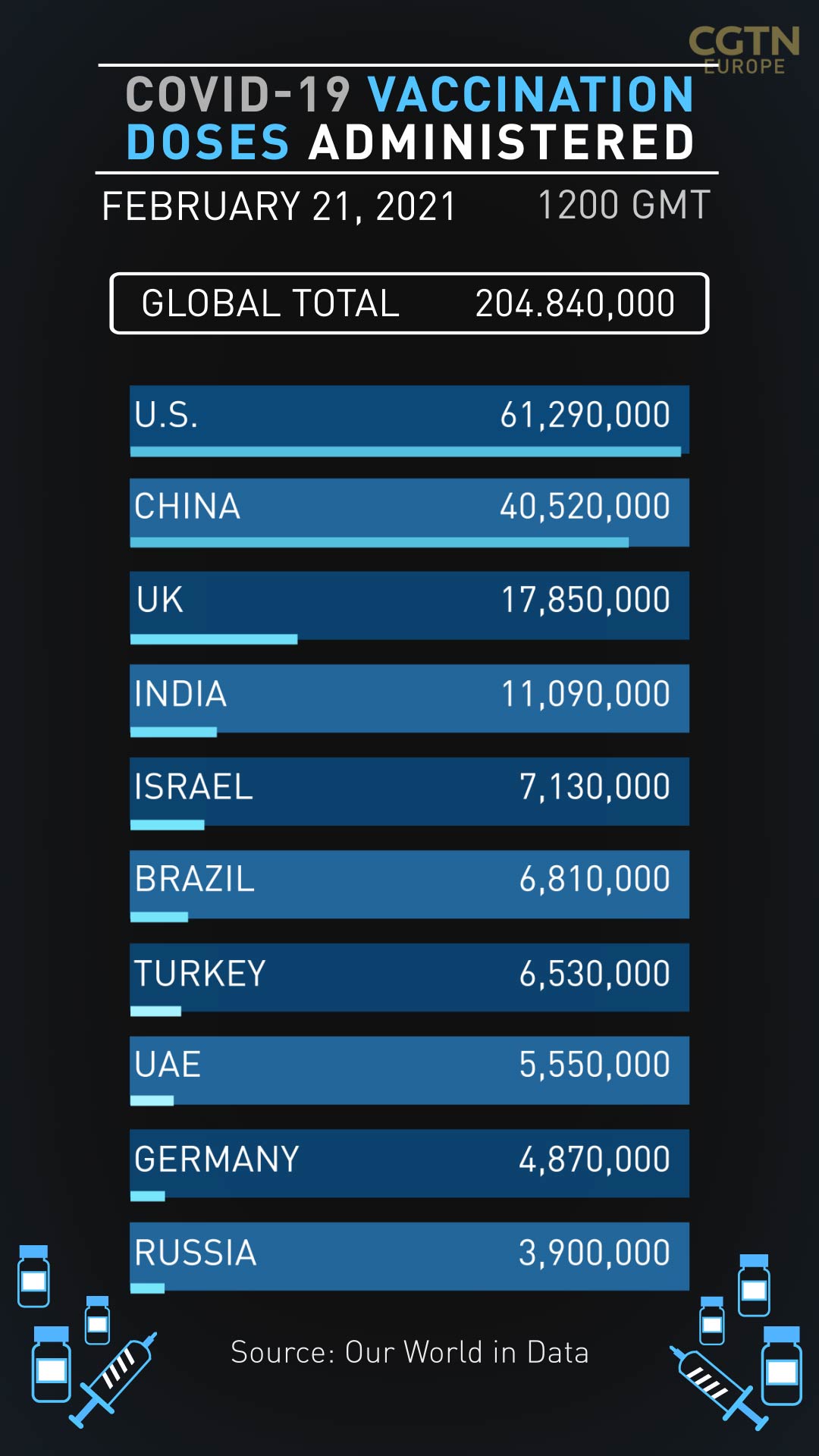 Two thirds of people aged 65 to 69 have now had their first jab. The government wants all over-50s and those with underlying health conditions to have had one by April 15. The target is for every adult to have been offered their first dose by July 31, though the order of priority is yet to be determined.

With infection rates falling rapidly, pressure is mounting for a swifter re-opening of the economy and society in England (Northern Ireland, Wales and Scotland have some devolved powers to set their own timelines). Johnson is meeting with senior ministers on Sunday to finalise a 'roadmap' for easing restrictions, a plan which is due to be announced on Monday.

The first step is widely expected to be the reopening of all schools in England on March 8. Some school leaders and scientists want a phased return to class, but that idea has lost momentum with opposition Labour Party leader Keir Starmer on Sunday also supporting the government's plan for a more rapid re-start.

German health officials are concerned about the direction of the country's seven-day R-number, also known as the reproduction rate.

After weeks of being below one, it reached 1.07 on Saturday evening, a worrying trend according to Germany's center for disease control The Robert Koch Institute (RKI).

This could indicate that the more contagious virus variants are spreading faster in the country despite the lockdown, which is set to end on March 7, and RKI President Lothar Wieler called on people to persevere with restrictions.

"We are possibly at a turning point again – the downward trend of the last few weeks does not seem to continue," Wieler said. "It is quite simply that we have to follow these measures that we know, that we have to hold out for a certain time."

However, schools in a majority of German states will begin re-opening on Monday, after weeks of closures. This is leading to discussions over whether school staff should be bumped up the coronavirus vaccination priority list.

Serbia has received its first shipment of the vaccine developed by Oxford University and AstraZeneca, making it the first country in the Western Balkan region to receive shots of the jab.

A plane carrying 150,000 doses of the jab arrived at Belgrade Airport from Turkey on Sunday, with another 150,000 expected in 12 weeks' time, said the country's president Aleksander Vucic.

Vucic said the price of the vaccine was "very good as both AstraZeneca and Oxford gave up their profits."

"This vaccine was developed by a young team at the Oxford University which also included young people from Serbia," British ambassador Sian MacLeod added when greeting the shipment at the airport.

More than 10 percent of the Serbian population have already been vaccinated with at least one dose. Citizens are currently being given the choice between Pfizer-BioNTech, China's Sinopharm or Russia's Sputnik V. 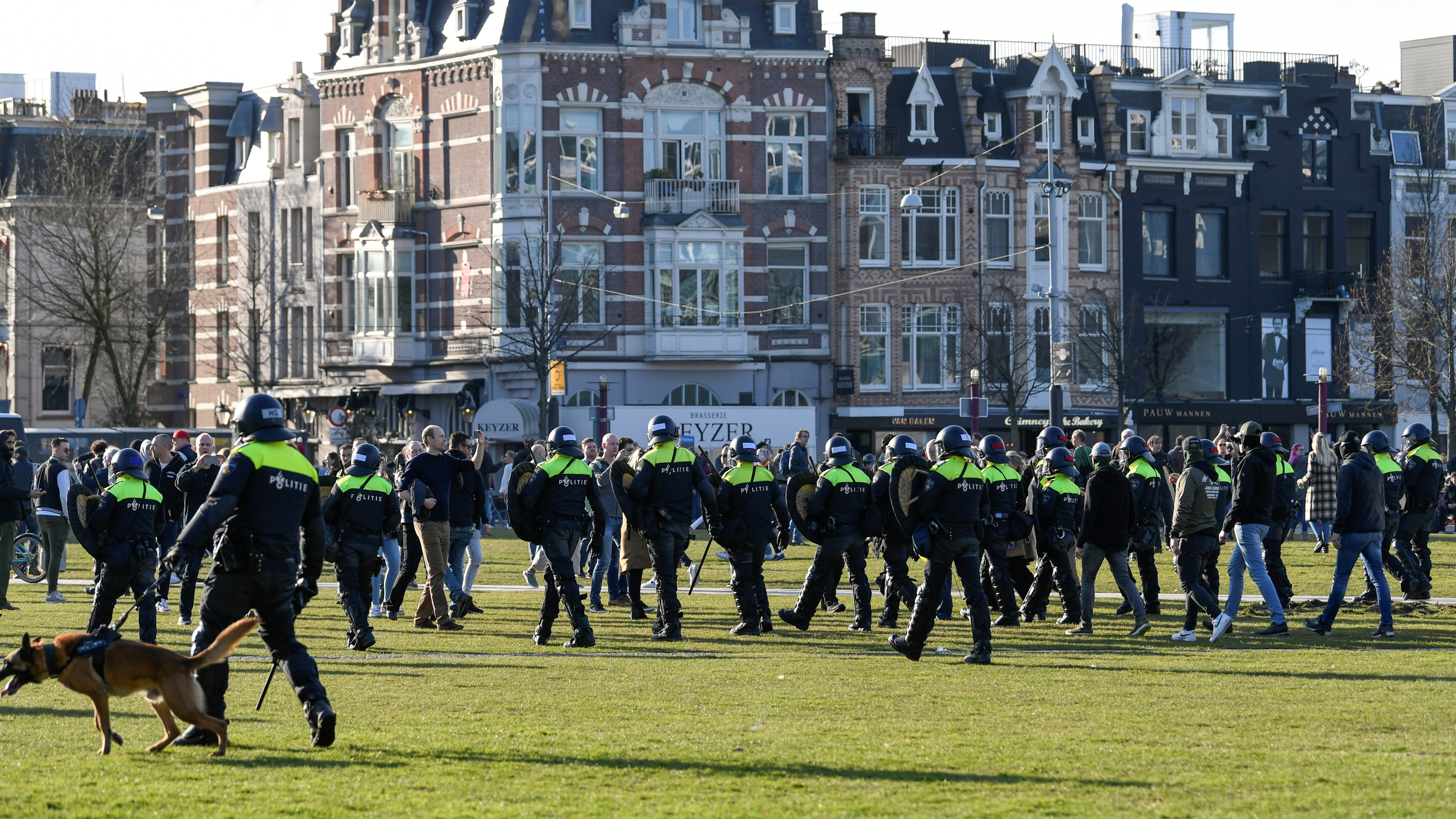 Police in Amsterdam forcibly removed anti-lockdown demonstrators from the city's Museum Square after they refused to leave. /Reuters

Police in Amsterdam forcibly removed anti-lockdown demonstrators from the city's Museum Square after they refused to leave. /Reuters

CGTN Europe: The Answers Project – How much is a life worth?