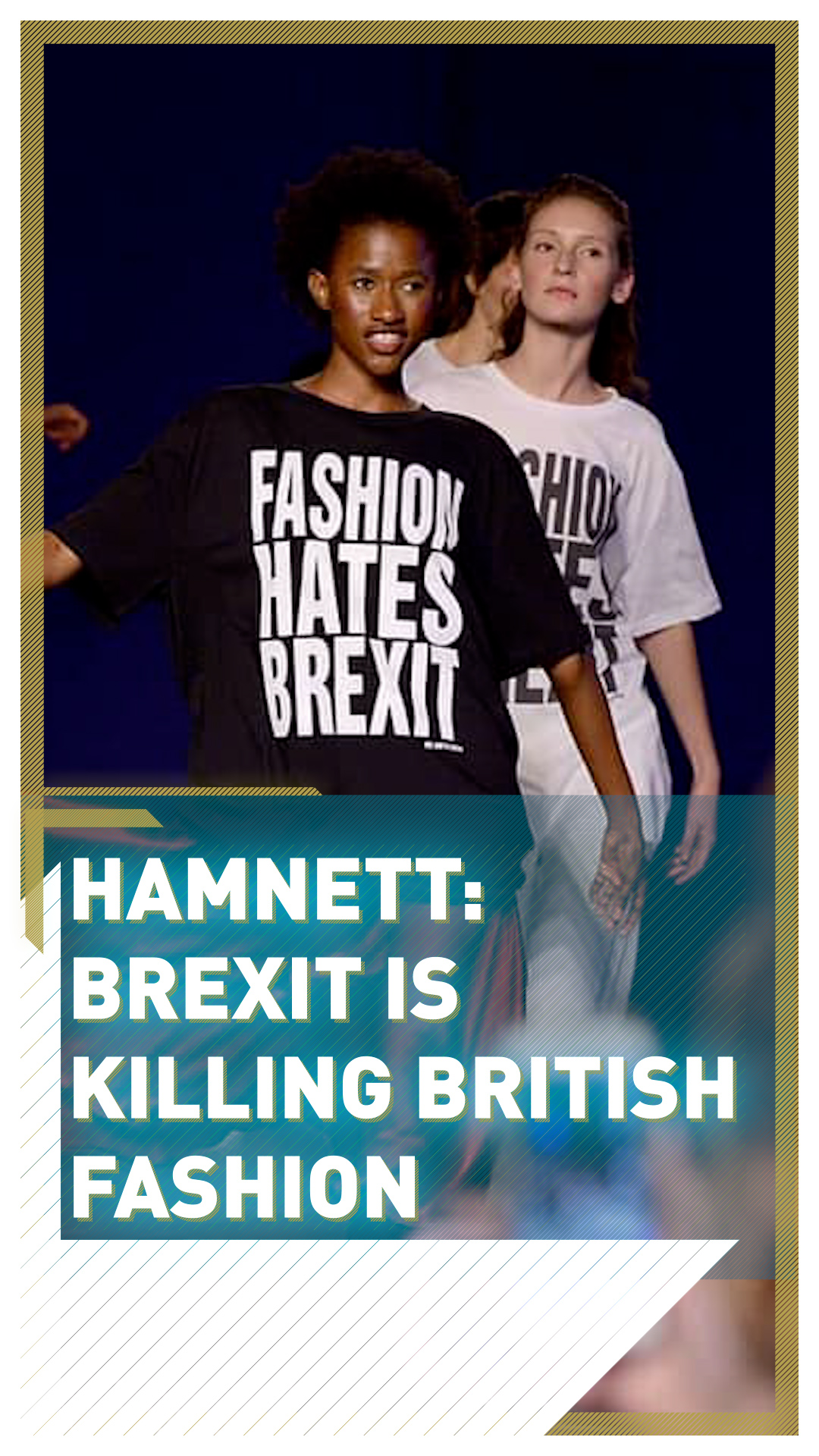 "The post-Brexit trade agreement is a catastrophe for the British fashion industry and it could kill 'Made in Britain.'"

That stark warning from Katharine Hamnett, the veteran British designer comes as the fashion industry gathers online for London Fashion Week this weekend.

Hamnett is known for her slogan t-shirts, first launched in 1983, which have since then been sported by pop star George Michael in his Wham! days, supermodel Naomi Campbell and Roger Taylor of the band Queen.

Hamnett's fashion is fueled by political activism and sustainability. However, like the rest of the British fashion scene, her concerns have turned most recently to Brexit and the devastating impact it is having on the nation, which has left a mark on the global clothing industry.

"Britain has traditionally been at the forefront in manufacturing and fabrics and producing fleets of the best designers in the world who are still working across the planet on every level of the industry," says Hamnett, citing celebrated designers such as Phoebe Philo and Alexander McQueen. 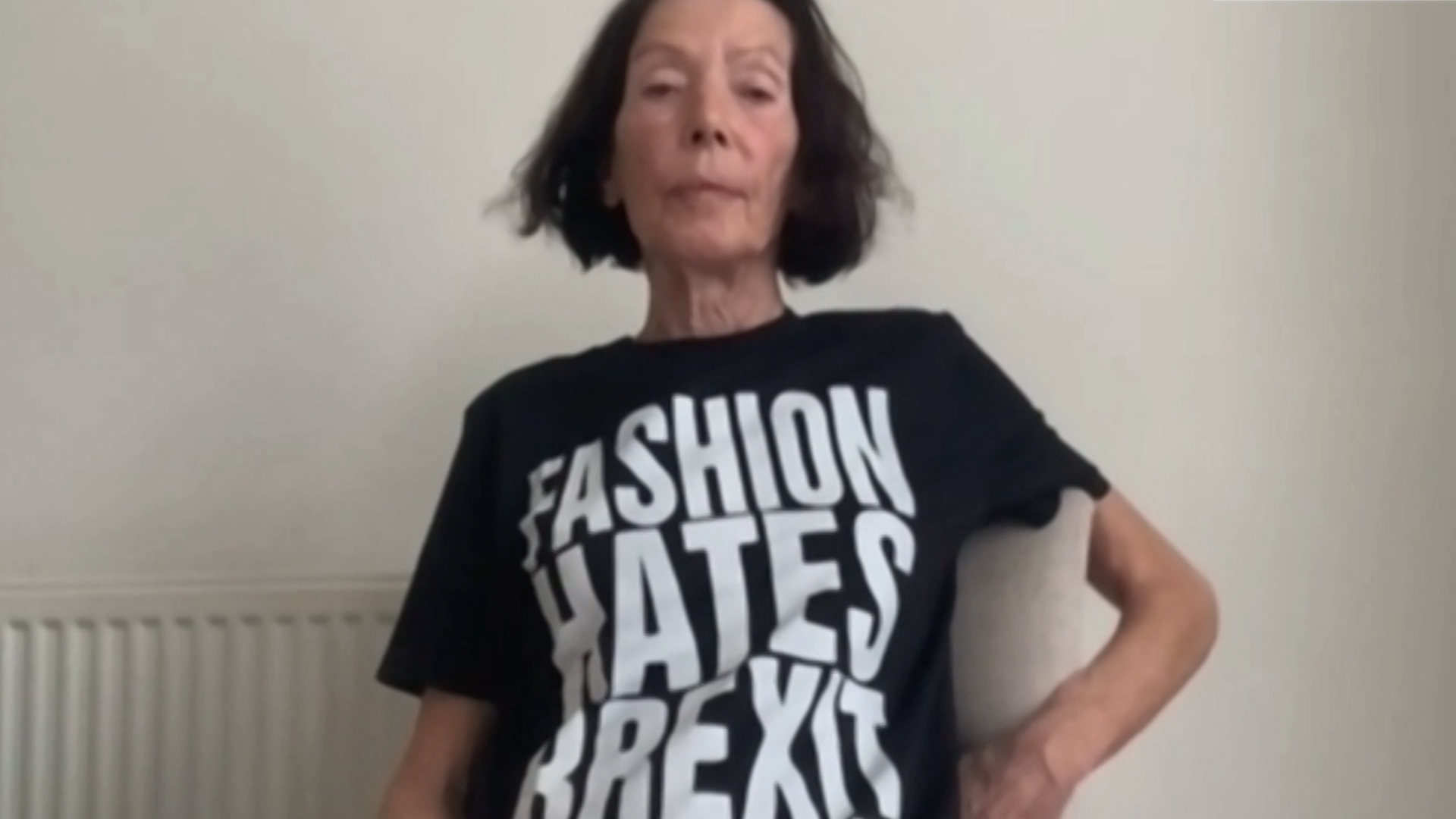 The ethical designer added that the cream of the world's designers come from Britain, but they are "being hampered by ridiculous restrictions on being able to carry out the job and bring the money that they earn back to the UK in the form of taxes."

Hamnett explains that some of the problems Brexit poses to the country's fashion designers include inhibiting travel and ramping up VAT charges, which she says is "slaughtering British exports" to the point that "some brands have even given up exporting."

The veteran designer also draws comparisons with the British fishing industry which, despite being a sixth of the size of the fashion sector, was given a $32.1 million package from the government. If a similar option were to be offered to the fashion sector, it would have to be $907 million dollars, she argues.

"We [the fashion industry] are being ignored," says Hamnett.

The British fashion industry turns over $49 billion a year, employs a million people and is, in Hamnett's words, "having its throat cut" by Brexit regulations and the awkward export processes, which have already pushed many British fashion houses to relocate to the EU.

"I know you need to be exporting at least half of your production, mostly in Europe in fact, to be able to survive as a fashion brand" says the designer.

"This is being taken away from people - freedom of movement of fashion professionals, whether they're English ones working abroad, whether they are foreign ones coming to the UK to help in the garment industry, that's completely being slaughtered."

"The post-Brexit trade agreement is a catastrophe for the British fashion industry and it could kill 'Made in Britain' – which in Japan and Southeast Asia is regarded as a supreme mark of quality – stone dead."

Many British fashion industry icons are taking matters in their own hands and more than 400 figures, including Hamnett, have signed an open letter to UK Prime Minister Boris Johnson warning that post-Brexit restrictions threaten their survival.

The letter says that "without urgent attention, these issues will jeopardize the immediate and long-term future of the sector" and that the Brexit trade agreement failed to promise frictionless future trade.

While the worries expressed by the fashion industry are similar to those also expressed in the music, fishing and motoring sectors, the letter also highlights the economic value of the globally renowned British fashion industry to the nation's economy, contributing more financially than all three combined.

Looking to the future, Hamnett says: "We really need the trade rules to be completely rewritten or we're going to have no 'Made in Britain' fashion business."