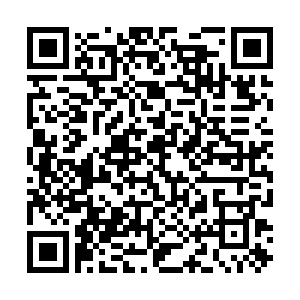 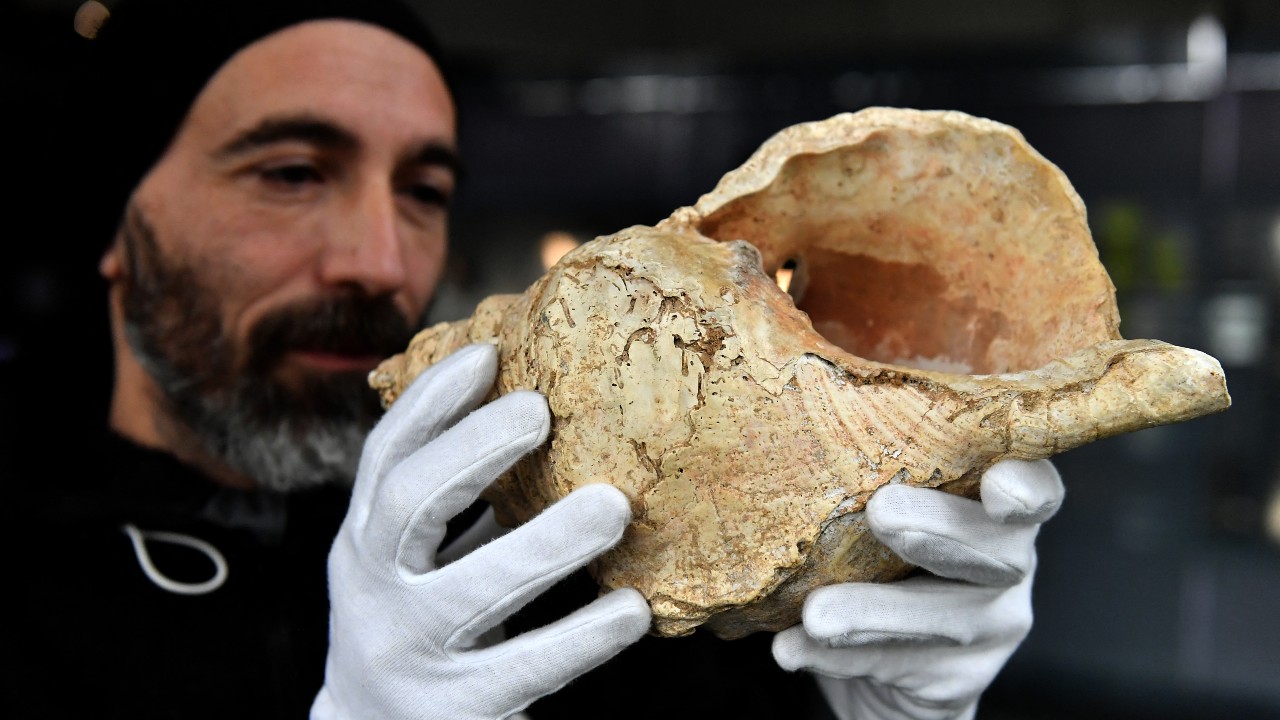 Guillaume Fleury, from Toulouse's Museum of Natural History, shows the Charonia lampas trumpet shell, played for the first time after 18,000 years of silence and decades forgotten in a French museum. /Georges Gobet/AFP

Guillaume Fleury, from Toulouse's Museum of Natural History, shows the Charonia lampas trumpet shell, played for the first time after 18,000 years of silence and decades forgotten in a French museum. /Georges Gobet/AFP

An 18,000-year-old large conch shell overlooked in a French museum for 90 years has being named the oldest known seashell instrument in the world by archaeologists.

The Charonia lampas shell was found during the 1931 excavation of the Marsoulas cave, which features prehistoric wall paintings, in the French Pyrenees. For 90 years it was assumed to be a ceremonial drinking cup but archaeologists from the University of Toulouse recently re-examined it and determined it had been modified thousands of years ago for musical use.

Having identified the 31cm shell, they invited a French horn player to blow it. 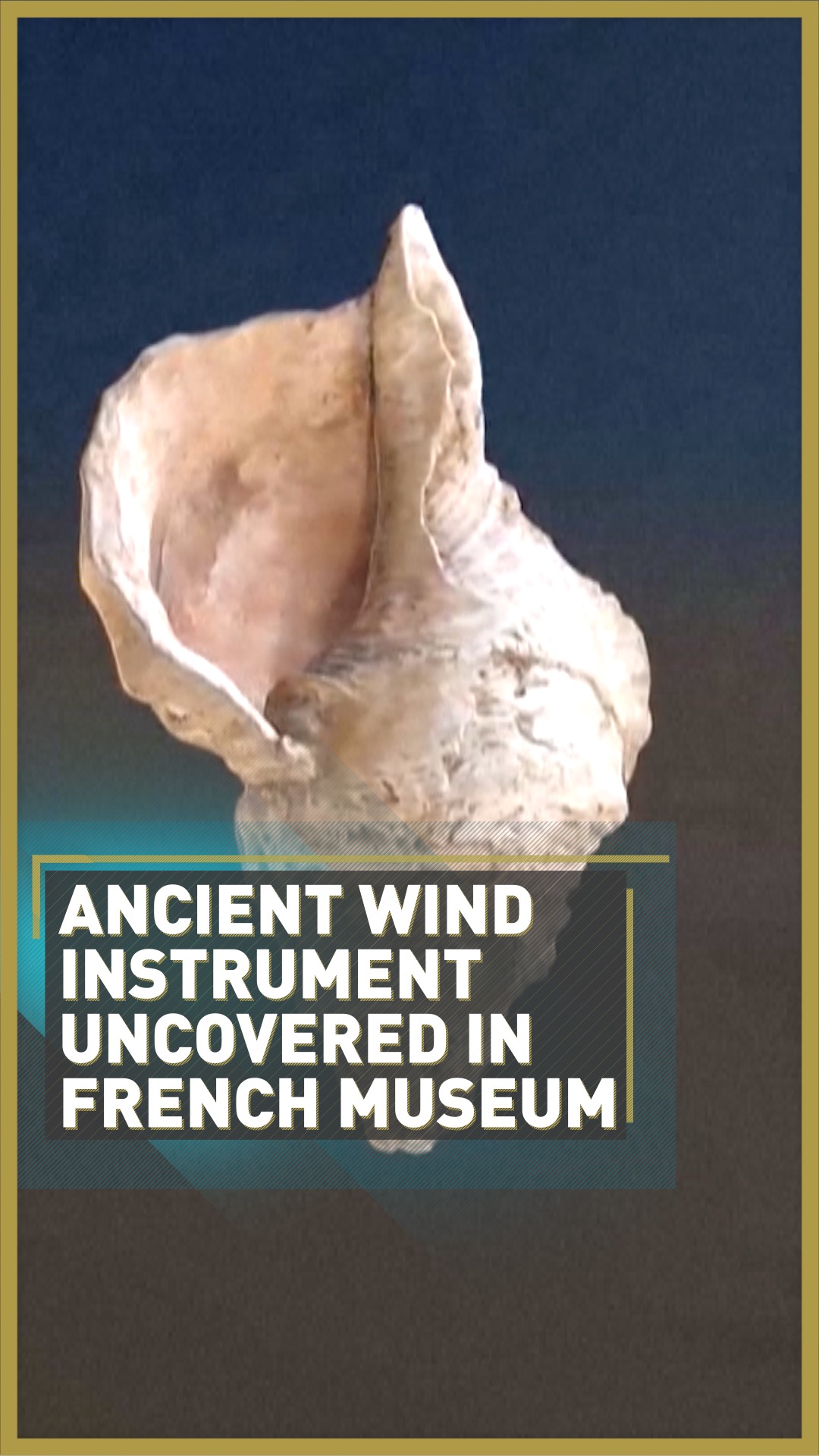 "Hearing it for the first time, for me it was a big emotion – and a big stress," she said.

The researchers published their findings on Wednesday in the journal Science Advances. The previous oldest known conch shell, found in Syria, is thought to be 6,000 years old.

The discovery was made during an inventory at the Natural History Museum of Toulouse, when researchers noticed some unusual holes in the shell. Microscopic inspection revealed an opening at the tip of the shell had been deliberately crafted, creating a hole large enough to blow through.

By inserting a tiny medical camera, they found another hole carefully drilled in the shell's inner chamber. Traces of red pigment were detected on the conch’s mouth, matching a decorative pattern found on the wall of the Marsoulas cave.

The cave is not located near an ocean, so researchers believe prehistoric people must have either moved around widely or used trading networks to obtain the shell.

Using a 3D replica, the archaeologists plan to continue studying the horn's range of notes. 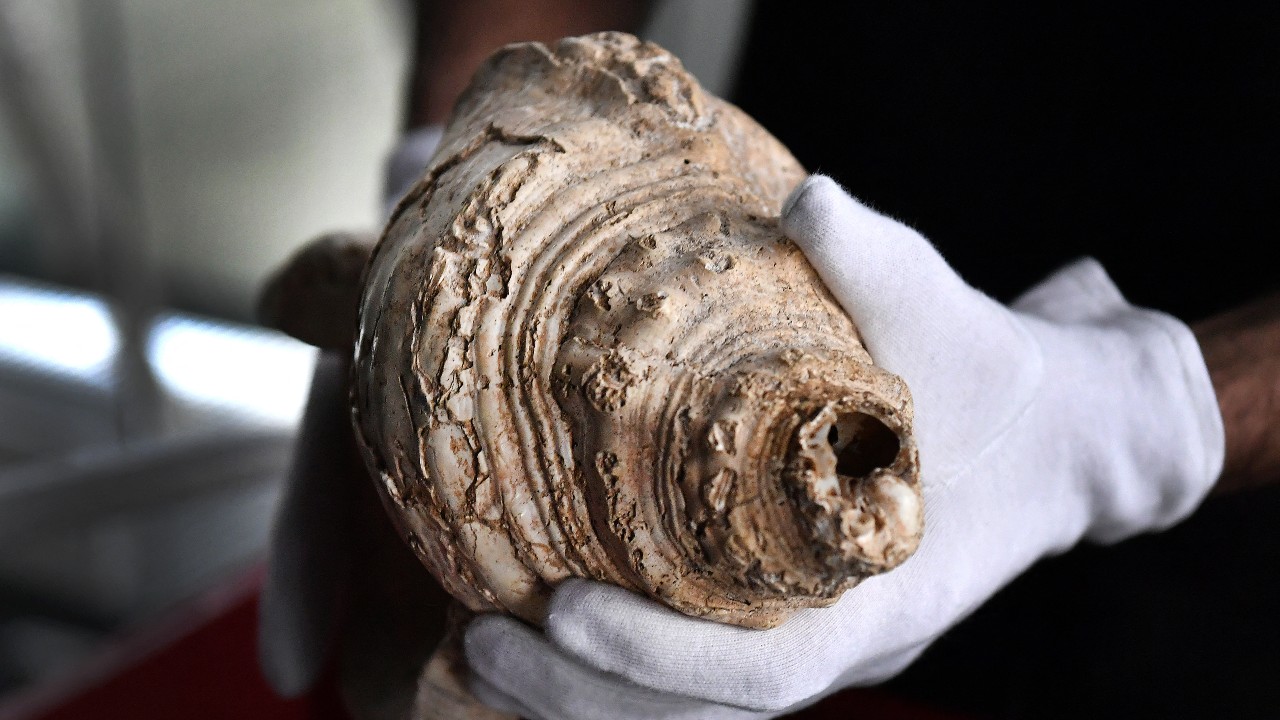 The conch sea shell has a large, crafted, hole large enough to blow through. /Georges Gobet/AFP

The conch sea shell has a large, crafted, hole large enough to blow through. /Georges Gobet/AFP

The musical origins of the conch shell

Conch or conque, also known as a "seashell horn" or "shell trumpet," have been used widely in musical and ceremonial traditions for millennia, including in ancient Greece, Japan, India and Peru.

Made from the shell of different kinds of sea snails, their natural conical bore is used to produce a musical tone.

The shell has considerable significance in Hinduism and is considered one of Buddhism's eight auspicious symbols.