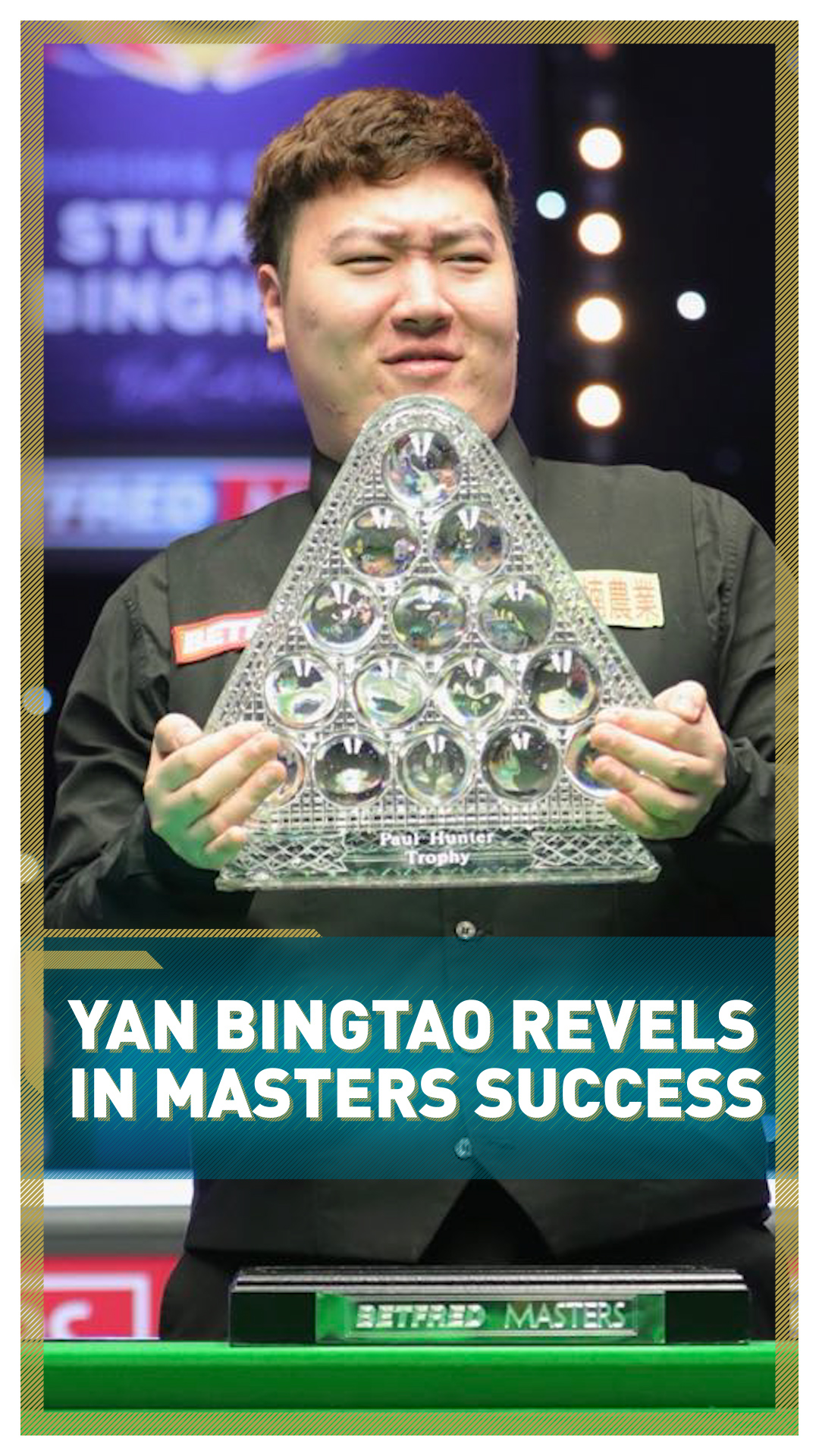 Chinese snooker prodigy Yan Bingtao became the youngest winner of the Masters championship in 26 years on Saturday and he's now got his eyes set on more titles.

The 20-year-old produced a stunning display to beat veteran and pre-match favorite John Higgins 10-8, despite trailing at 5-3 and 7-5.

Bingtao will celebrate his 21st birthday next month but despite his tender years he told CGTN he's already hungry for more success and aims to inspire a new generation of Chinese players.

Yan, congratulations on the win - how does it feel?

Yan：I feel very excited, this is my first Masters title, it's also unexpected, I didn't expect myself to go all the way and clinch the title. I still feel slightly dizzied. It's the most important major victory for me since I became a professional snooker player.

CGTN: You have competed with John Higgins, who is a very experienced, excellent player himself, do you feel nervous at all, especially during the last few frames?

Yan: Yes, I have learned a lot from John Higgins, who has won many prestigious titles. My style of play resembles him as well. I wanted to learn from him in the final, including how to deal with key frames of the match. I felt pressured before the end of the match, John was doing everything to save the match, I felt very difficult. Luckily I managed the pressure and eventually won the match. Yan was down 5-3 and 7-5 but produced a stunning display to fight back and beat snooker legend John Higgins./YanBingtao

Yan was down 5-3 and 7-5 but produced a stunning display to fight back and beat snooker legend John Higgins./YanBingtao

CGTN: Ding Junhui is the most successful player to emerge from China, did you look up to him as a role model?

Yan: Chinese snooker players know the name Ding Junhui when they enter into the sport, Ding is by far the most famous, best Chinese player, who has won numerous world titles. I looked up to him as a role model when I started. I read news about what and how he has trained before his success, I try to train like him as much as possible. My father accompanied me to my training, just like his father did with him.

CGTN: Snooker has traditionally been an English sport but is becoming popular in China - could your win boost the sport in the country?

Yan: I hope this victory could in general boost the sport's development in China in the future, so that more people know about the sport and other young hopefuls apart from Ding Junhui. There are more than 20 Chinese players in the UK playing professional games. About 6 or 7 of them are highly competitive. Young Chinese players are getting better and better and are beginning to make their mark in international competitions. I have great confidence in the development of Chinese snooker. 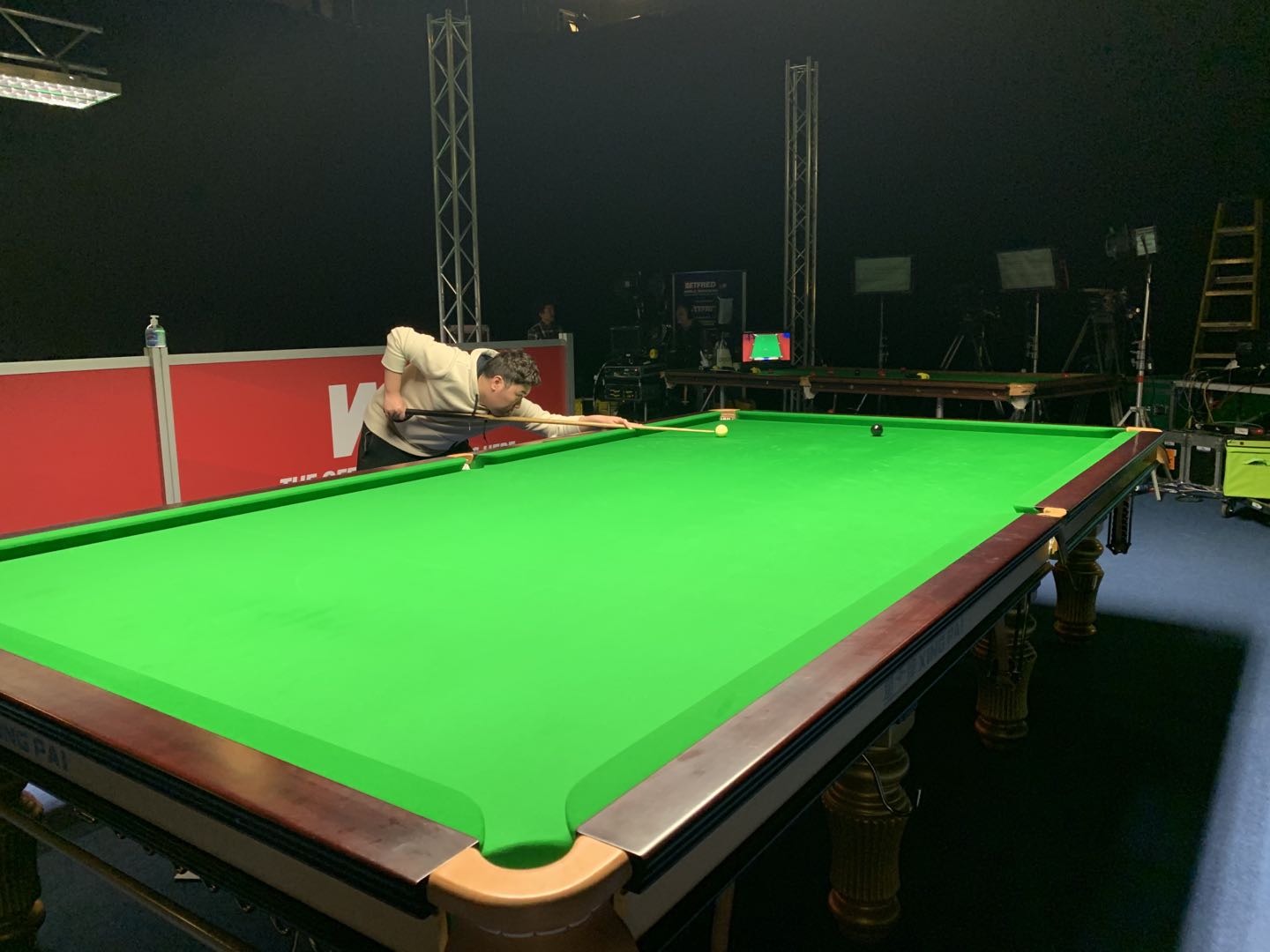 The 20-year-old has been living and training in England for several months and says there are a host of talented Chinese players who could follow in his footsteps and win major tournaments./YanBingtao

The 20-year-old has been living and training in England for several months and says there are a host of talented Chinese players who could follow in his footsteps and win major tournaments./YanBingtao

Have you been working on your English during your time training over here?

Yan: I like to watch English movies with subtitles, and also talking to international players in the academy. They are very patient with me, talking slowly with me, and whenever there is something I don't understand, they will look up the translation and show me. So I think my English has improved while living and training here.

Next month, you will be 21, what are your goals for the future?

Yan: I hope to gather more confidence in the next year, and to achieve more. I hope to work towards getting more titles before 22.