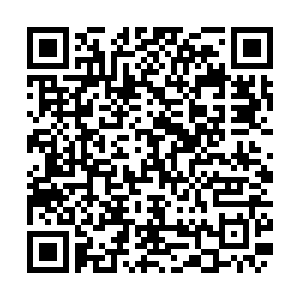 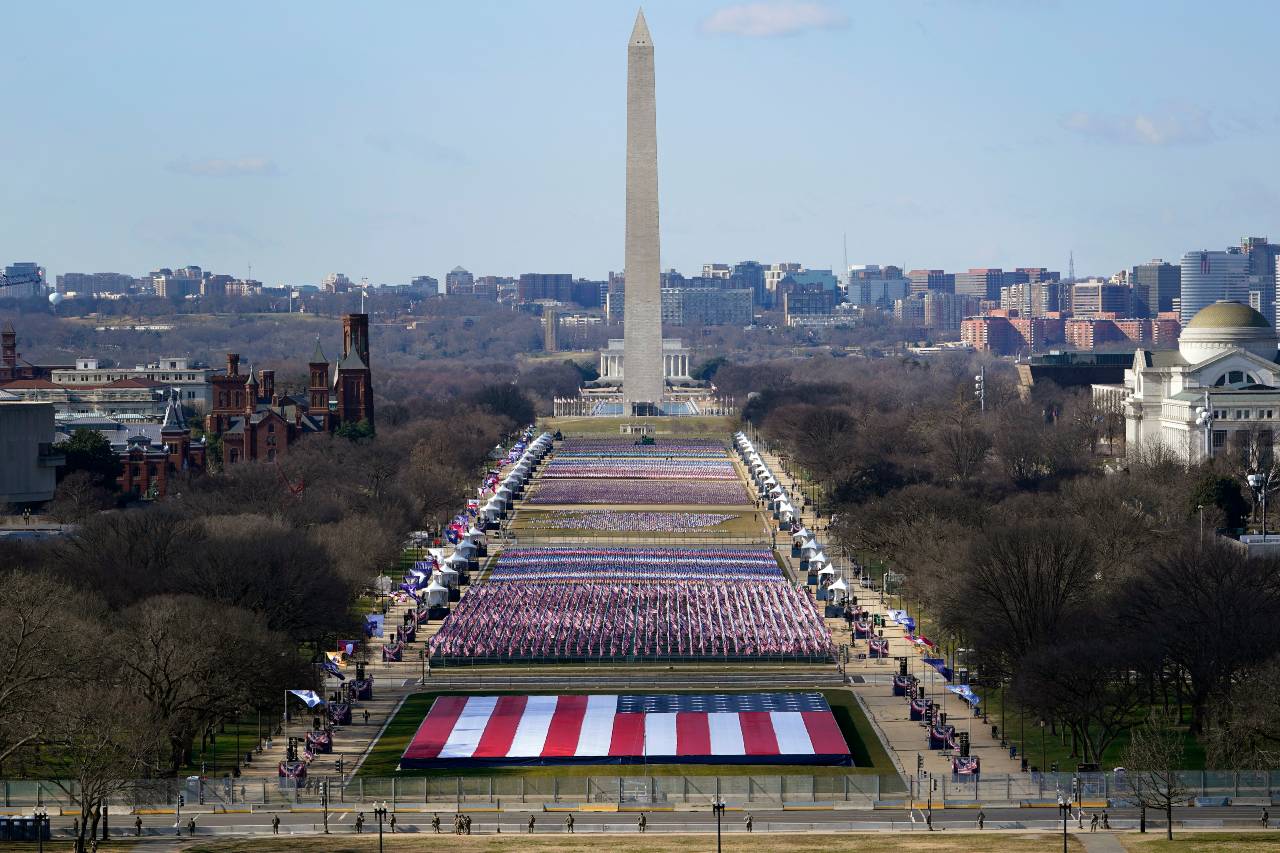 Top European Union officials have welcomed the inauguration of Joe Biden as U.S. president, saying that "after four long years" of Donald Trump, Europe once again had "a friend in the White House."

Trump's tenure as U.S. leader brought a notable cooling of relations with the bloc, characterized by rankling over trade deals, NATO commitments, the Iran nuclear deal, and Washington's decision to pull out of the Paris climate agreements.

As Biden is sworn in as the 46th president on Wednesday, many European leaders hailed a new era of relations with the U.S., emphasizing the need for a new "founding pact" between democratic powers.

"This time-honored ceremony on the steps of the U.S. Capitol will be a demonstration of the resilience of American democracy," said European Commission President Ursula von der Leyen, "and the resounding proof that, once again, after four long years, Europe has a friend in the White House."

Speaking during an address in the European Parliament, the EU chief also issued a stark warning about the legacy of Biden's predecessor: "President Trump may be history in a few hours, but his supporters remain. More than 70 million Americans voted for Trump in the election," she said. 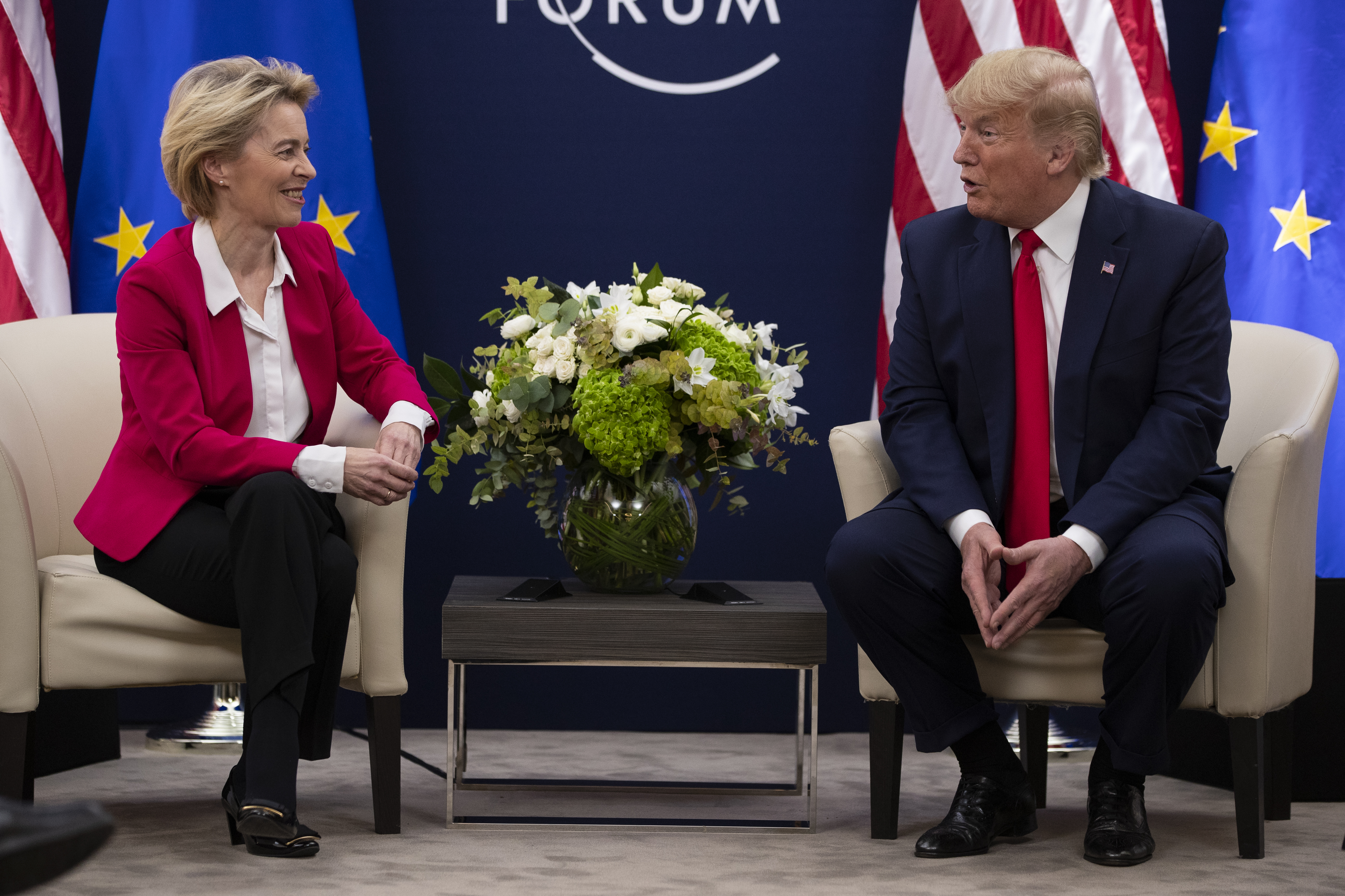 "A few hundred of them stormed the Capitol in Washington, the heart of American democracy, just a few days ago," she said. "And this really is what it looks like when words are put into deeds, when hate speech and fake news become a real danger to democracy."

In contrast, the European Council president Charles Michel struck a more positive tone: "Law, order and democracy have prevailed over this disgraceful attempt to overturn the election. American democracy has proven its strength and resilience," he said. 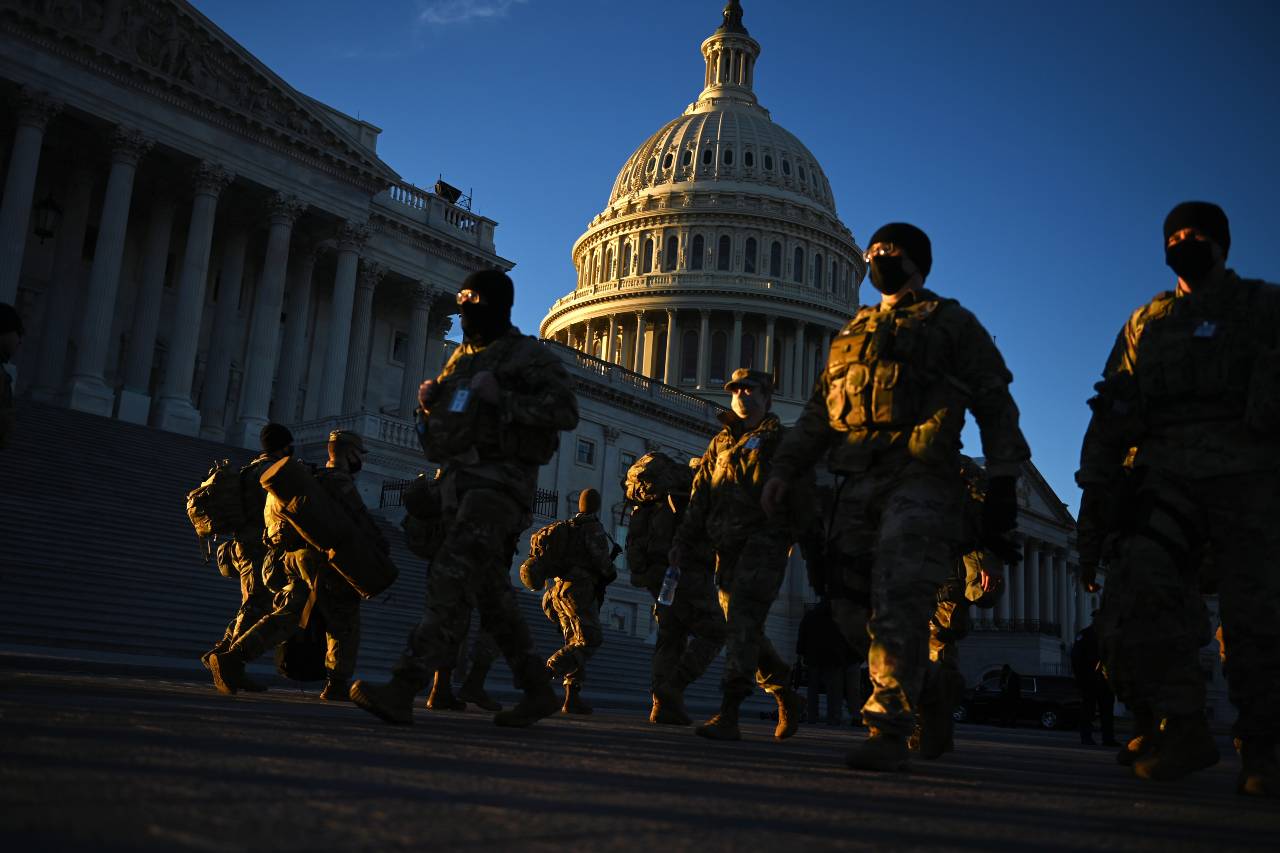 Members of the U.S. National Guard protect the U.S. Capitol ahead of the inaugural ceremony for President-elect Joe Biden. /Brendan Smialowski/AFP

Members of the U.S. National Guard protect the U.S. Capitol ahead of the inaugural ceremony for President-elect Joe Biden. /Brendan Smialowski/AFP

UK Prime Minister Boris Johnson, considered an erstwhile ally of the Trump administration, said he was looking forward to "working closely" with Biden.

"In our fight against COVID-19 and across climate change, defence, security and in promoting and defending democracy, our goals are the same and our nations will work hand in hand to achieve them," he said in a statement.

"I am greatly relieved that Joe Biden will be inaugurated as president today and move into the White House," the head of state said. "I know this feeling is shared by many people in Germany." 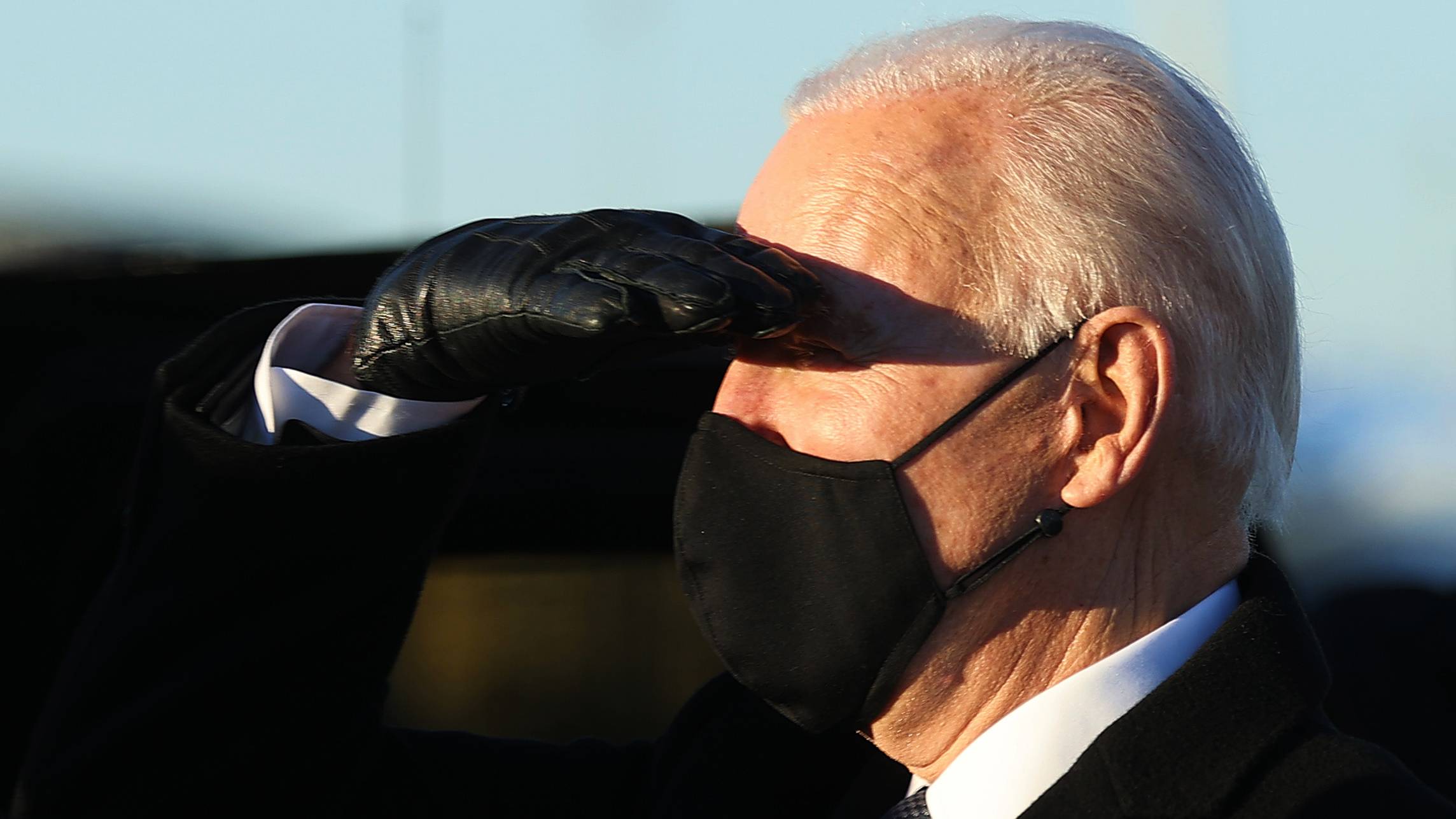 French President Emmanuel Macron, speaking to French military in Brest, called on Biden to show a greater commitment than his predecessor to the fight against terrorism, particularly in the Middle East.

"I am certain that in the coming weeks, the new administration will need to make key decisions that will mark a greater commitment and awareness in the fight against terrorism" in Syria and Iraq, he said.

NATO chief Jens Stoltenberg wrote on Twitter on Wednesday: "We look forward to working with President-elect @JoeBiden to further strengthen ties between the #UnitedStates & #Europe, as we face global challenges none of us can tackle alone."

Moscow was less zealous over Biden's swearing in, saying that improved relations between Russia and the United States depended solely on the "political will" of the incoming president.

"No one in the Kremlin is preparing for this inauguration. This will not change anything for Russia which, as has been the case for many years, will continue its existence by seeking good relations with the United States," said the spokesman for the Russian presidency, Dmitri Peskov.

At a press briefing, he added that the "political will" needed to rekindle ties between the two countries "will depend on Mr Biden and his team." 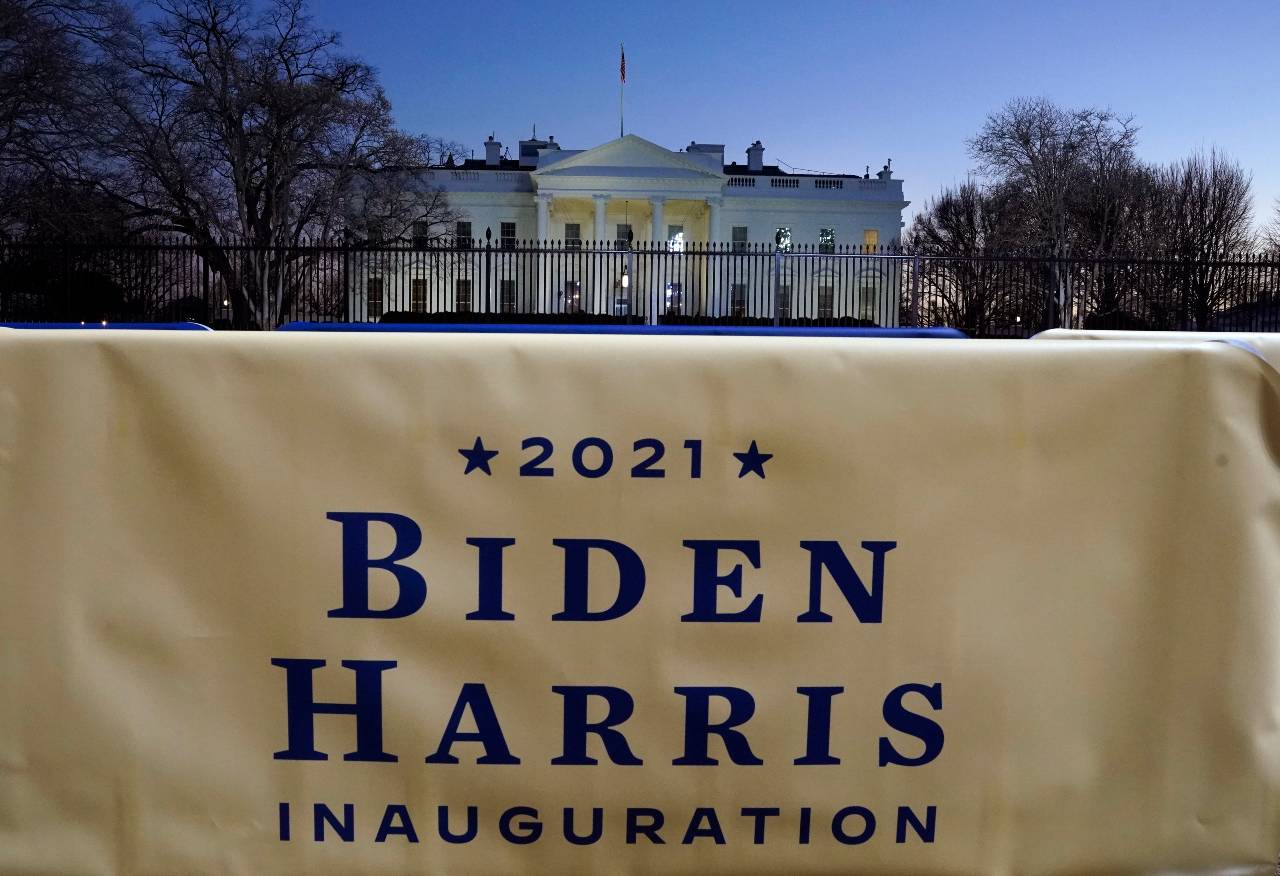 More than 25,000 National Guard troops were stationed at the U.S. Capitol for the inauguration of Joe Biden – and the National Mall was shuttered without any of the usual spectators. /Timothy A. Clary/AFP

More than 25,000 National Guard troops were stationed at the U.S. Capitol for the inauguration of Joe Biden – and the National Mall was shuttered without any of the usual spectators. /Timothy A. Clary/AFP

Many European powers hope Biden's swearing-in will bring down the curtain on Trump's tumultuous leadership and chart a new course of cooperation, particularly in light of the COVID-19 pandemic global response and recovery.

Biden, a 78-year-old former vice president and longtime senator, will take the oath of office at noon (1700 GMT) on the U.S. Capitol's western front – where only two weeks ago, pro-Trump rioters clashed with police before storming Congress.

Overwhelming security measures have been taken to make sure there wasn't a repeat at Wednesday's ceremony, with over 25,000 National Guard troops stationed at the Capitol and a shuttered National Mall without any of the usual spectators.

Trump broke days of silence with a farewell video address on Tuesday, asking Americans to "pray" for the success of the incoming administration. However, he has yet to personally congratulate Biden.

In what will be music to many European ears, the incoming president plans to kick off his tenure by rejoining the Paris climate accord and the World Health Organization, according to aides, who said Biden would sign 17 orders and actions just hours after being sworn in, including dropping Trump's so-called "Muslim travel ban."

According to the EU Council President: "Today is more than a transition. Today is an opportunity to rejuvenate our transatlantic relationship, which has greatly suffered in the last four years."