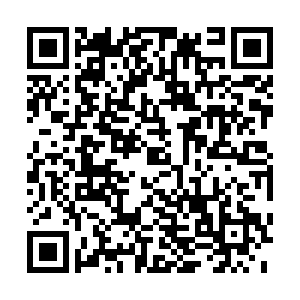 · Serbia has launched a mass COVID-19 inoculation program, becoming the first European country to use the Chinese-manufactured Sinopharm vaccine. "It is the only way to return to normal life," said Health Minister Zlatibor Loncar, the first to have received this vaccine.

· The UK has reported 1,610 COVID-19 deaths, the highest daily figure since the pandemic began, taking the country's death toll to 91,470. It comes as the Office for National Statistics reported by December 2020 approximately one in 10 people across the UK had suffered from COVID-19.

· Scotland's lockdown has been extended until at least the middle of February as a high number of cases continue to put the National Health Service under considerable strain.

· Germany's national lockdown has been extended until 14 February. Chancellor Angela Merkel and the country's federal leaders agreed to ban the use of reusable fabric masks and face coverings, making it compulsory to wear medical masks in shops and on public transport.

· Infections in Switzerland and the neighboring principality of Liechtenstein passed the 500,000 mark on Tuesday, according to data from Swiss health authorities.

· Spain's eastern region of Valencia will close all bars and restaurants "for a limited time" in an effort to rein in the third wave of infections, with 52.8 percent of the region's intensive care unit beds currently occupied by COVID-19 patients.

· Denmark will include homeless people among those given priority for COVID-19 vaccines, after charities and officials urged the government to care for the vulnerable group. The Scandinavian country is currently leading the European Union in the vaccine roll-out, in terms of jabs per capita.

· Spain will sell 30,000 doses of the BioNTech/Pfizer vaccine to neighboring Andorra, in an effort to redistribute excess vaccines, the country's health ministry said. As part of EU purchase agreements, Spain will receive 140 million of doses of the different vaccines for its population of 47 million.

On January 20, the government will discuss the possible introduction of a curfew. The additional measures will be considered to contain the spread of the new variant first found in the UK.

It will need the approval of the Lower House, however, gaining a majority is uncertain. Mayors are not keen on the curfew that they will have to enforce. The police officials are preparing to enforce it although the police unions fear it will lead to "risky physical contacts" and violence aimed at officers.

The country recorded 4,822 cases on Monday, less than the average over the past seven days (5,630) and the lowest number since December 1. 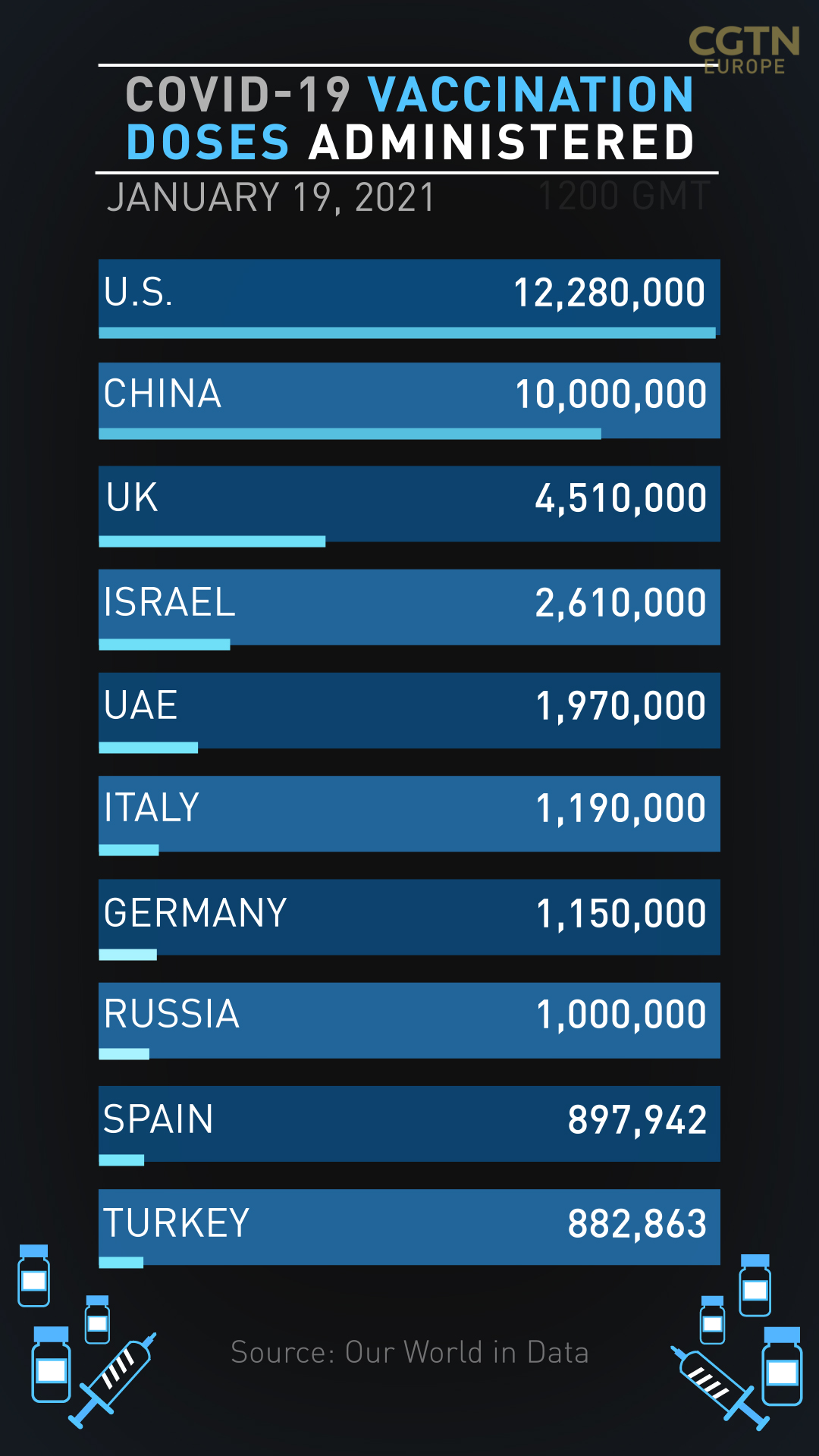 The UK is on course to record more than 90,000 COVID-19 deaths by the end of today as the race between infection and inoculation intensifies.

There have been 3.4 million recorded cases in Britain, but 4 million people have been vaccinated as of this week.

Research into long-COVID-19 has revealed that a fifth of people still have the virus symptoms five weeks after being infected. Nearly a third of the patients discharged from hospitals in England after treatment were readmitted within five months. 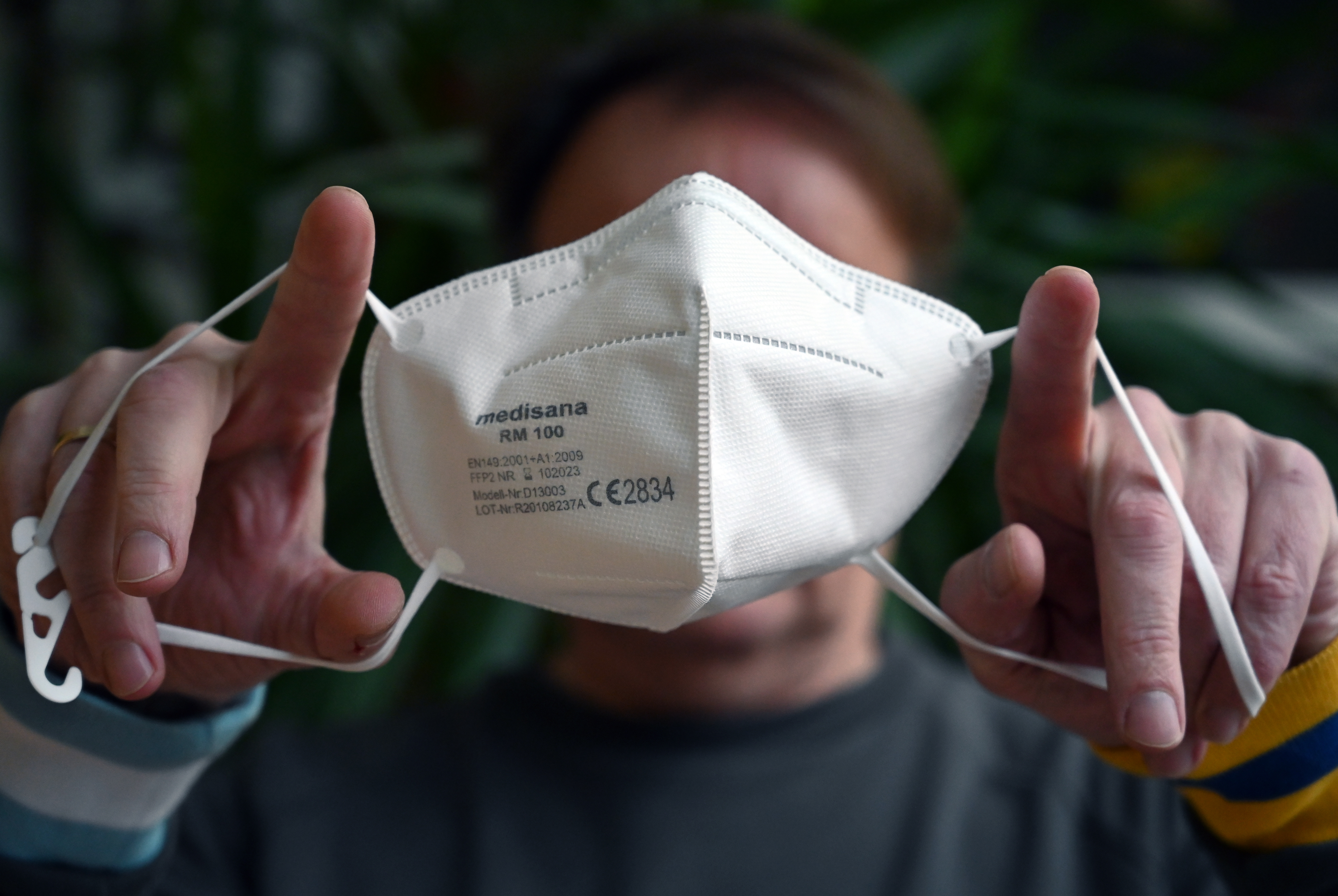 A ministerial committee met on January 18 to discuss the measures that should be taken to limit the spread of the new, more transmissible variants. While a complete travel ban is unlikely, measures to be introduced later in the week could include a tightening of quarantine and testing rules.

Meanwhile, the vaccination campaign expands this week to hospital staff. A total of 96,000 people have been vaccinated so far in the country, with one expert saying the campaign was "accelerating."

Hospital admissions in Belgium are continuing to drop, but daily new infections still remain above 2,000 after a post-Christmas surge. The number of new daily infections fell by 2 percent between January 9 and January 15. 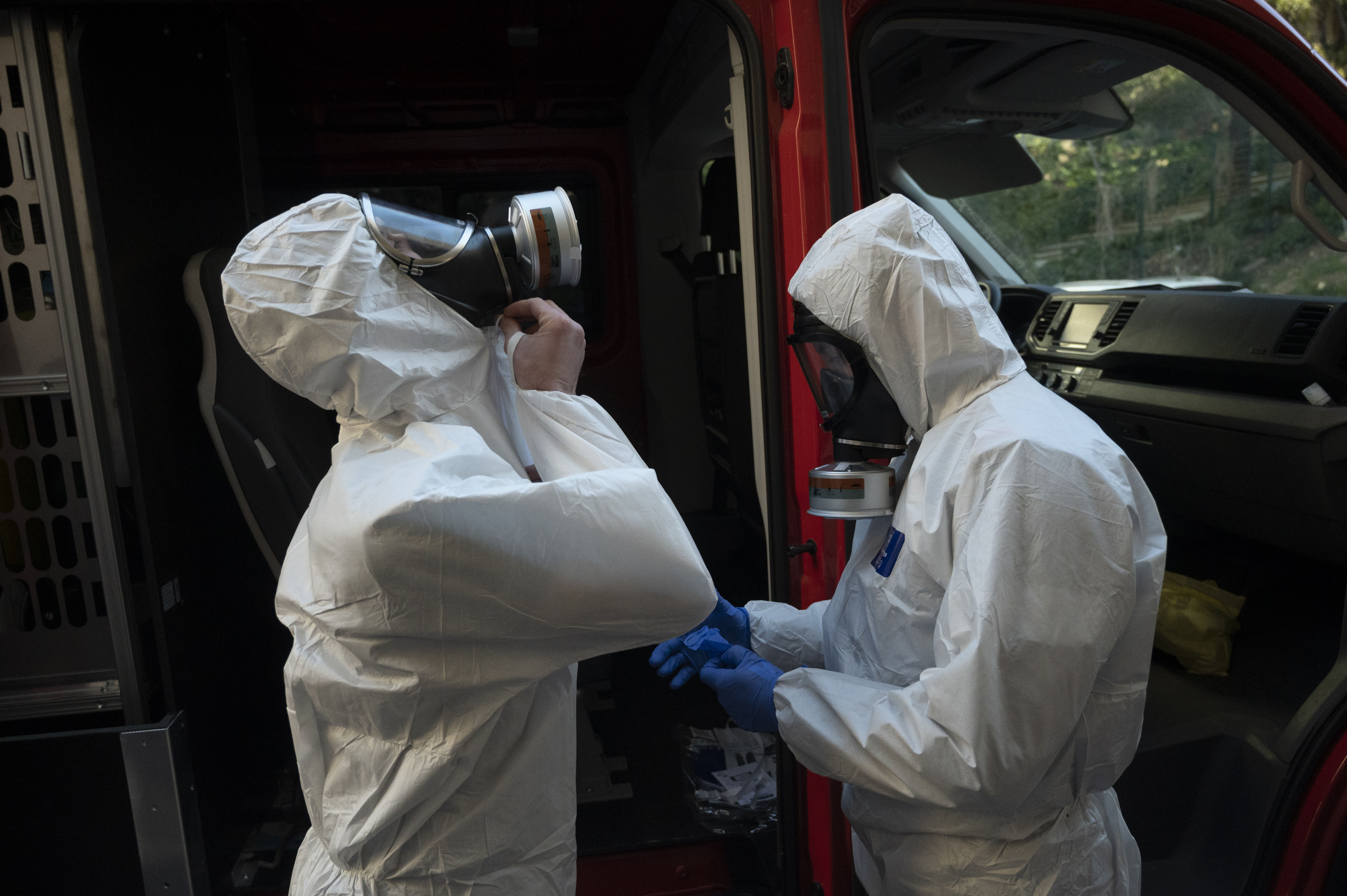 Marseille Naval Fire Battalion has been testing samples of waste water to for COVID-19 outside a nursing home in Marseille. /Christophe Simon/AFP

Marseille Naval Fire Battalion has been testing samples of waste water to for COVID-19 outside a nursing home in Marseille. /Christophe Simon/AFP

The French government is to consider making FFP2 face masks compulsory on public transport, following Austria and the German state of Bavaria.

Prime Minister Jean Castex has defended the country's vaccination campaign, saying "more than 422,000 people have been vaccinated. In the next two weeks, we will change gear."

He says the government will ensure that there are "no hidden stocks." The government is still set to achieve its goal of vaccinating one million people by the end of January.

The number of people in intensive care has crossed the threshold of 2,800. The figures from Public Health France mark an increase in the pressure on the health system after having fallen sharply since the peak in mid-November.

A total of 25,584 COVID-19 patients are currently being treated in hospitals across France.

He received an absolute majority after receiving additional backing from former 5-star lawmakers, with most of Italia Viva politicians abstaining.

The current crisis was sparked when Italia Viva's ministers in government, led by former prime minister Matteo Renzi, resigned over how to use around $250 billion from the EU recovery fund to revitalize the Italian economy.

Conte needs the backing of 161 senators for an absolute majority in Tuesday's vote of confidence in the Senate, Italy's upper house.

CGTN China: A reading of the steady performance of China's economy in 2020