· The World Health Organization Director-General Tedros Adhanom Ghebreyesus has said it is "not right" that younger, healthier adults in rich countries get COVID-19 jabs before older people or healthcare workers in poorer countries. The WHO is in advanced talks with Pfizer to include its jab in its vaccine-sharing program COVAX.

· The number of people in UK hospitals with the virus is 37,435, the highest since the start of the pandemic, with a patients being admitted every 30 seconds, the UK's Health Minister Matt Hancock has said. Meanwhile, the country has delivered 4 million jabs.

· Russia is offering its Sputnik V vaccine to any citizen who wants one from Monday. The country is relying on its mass-vaccination program to control the spread of the virus, having recorded 3.5 million cases, the fourth-highest total in the world.

· Uber will offer free rides to and from the seven mass-vaccination centers in England. It will cover trips up to £15 ($20), starting or ending at one of the centers, for 28,000 people. The offer includes wheelchair-accessible vehicles and Uber Assist vehicles for those needing assistance getting into and out of the car.

· Germany is considering making it mandatory nationwide to wear full protective filter masks, FFP2, on public transport and in shops, after the state of Bavaria introduced the rule.

· More than 40 million doses of the COVID-19 vaccines have been administered around the world, according to Our World In Data. At least 60 countries, representing 61 percent of the global population, have launched vaccination programs but nine out of 10 doses have been given in only 11 countries.

· Greece has eased its COVID-19 restrictions, with shops reopening for the first time in two months on Monday. Retailers selling non-essential items are required to follow strict measures.

· The new COVID-19 variant first detected in the UK has been found in three people in Japan with no travel history to the UK. Authorities are investigating how the three individuals caught the variant.

· Norway will ease some COVID-19 measures that had been in place for the past two weeks, Prime Minister Erna Solberg said on Monday. Households will be allowed to receive up to a maximum of five visitors, while children and teenagers can resume sports activities.

· France is set to administer 1 million COVID-19 vaccines by the end of January and has enough jabs to inoculate 2.4 million people by the end of February, Health Minister Olivier Veran said on Monday.

· Passengers have reported hour-long queues at London's Heathrow Airport as the UK's new travel measures on testing and quarantine came into effect from 4 a.m. today.

· Researchers in the U.S. and Switzerland have found the immune system remembers COVID-19 for at least six months. In case of a reinfection, specific memory cells can remind the immune system to restart the production of antibodies to help fight the virus.

· Disneyland Paris has postponed its reopening by almost two months, to April 1, due to the increase in the number of COVID-19 cases. "If conditions permit, we will reopen Disneyland Paris on the April 2, 2021," the group announced on its Twitter account.

· Frankfurt airport recorded its lowest passenger numbers since the 1980s as the global pandemic continues to hit the travel industry. Germany's largest airport recorded 18.8 million passengers in 2020, a 73 percent decline compared with 2019.

· British business leaders have urged the UK government to rescue the struggling train operator Eurostar, after the firm said it was close to collapse following border closures due to the pandemic. Its passenger numbers were down 95 percent in 2020 from the previous year.

Hospital staff in Belgium can now get vaccinated as the country expands its vaccination roll-out. Priority will be given to workers in COVID-19 wards, as well as intensive care and emergency wards.

It comes as the Moderna shot, the second vaccine to be authorized by the European Medicines Agency (EMA), will start being administered alongside the BioNTech-Pfizer jab.

Meanwhile, COVID-19-related hospital admissions continue to drop in the country. Between January 11 and January 17, an average of 115 patients were admitted to hospital, which is 10 percent fewer than during the previous seven days.

The rate of infection, however, it still on the rise. An average of 2,010 new positive cases were recorded daily in the last week, an increase of 9 percent.

France's vaccination campaign is being expanded to 6.4 million people on Monday, with the vaccine now available for people aged 75 and over who do not live in a retirement home.

Until now, the vaccines were reserved for nursing home residents, emergency personnel and caregivers. In addition, 800,000 people with "high-risk" diseases such as cancer have also been able to get vaccinated. So far, 420,000 people have received their first injection.

Arnaud Fontanet, one of the epidemiologists on France's Scientific Council, which is advising the government on the pandemic, has warned that a "surge" in coronavirus infections is probable.

"The variants are really a game-changer for this epidemic, I have no rational argument to tell you that we are not going to experience a progression of the epidemic, which could begin in March or April," he said.

Slovakia has launched a mass COVID-19 testing program, which will last until January 26. It aims to test its entire population in nine days, making it the first country to attempt such a feat.

After January 26, only those with a negative test result will be allowed to go to work.

The move aims to curb the infection rate drastically. The government has also extended its lockdown, which was due to end on January 24, until February 7.

Residents will not be allowed to visit their families, go to church or leave their districts until after the restrictions are eased. 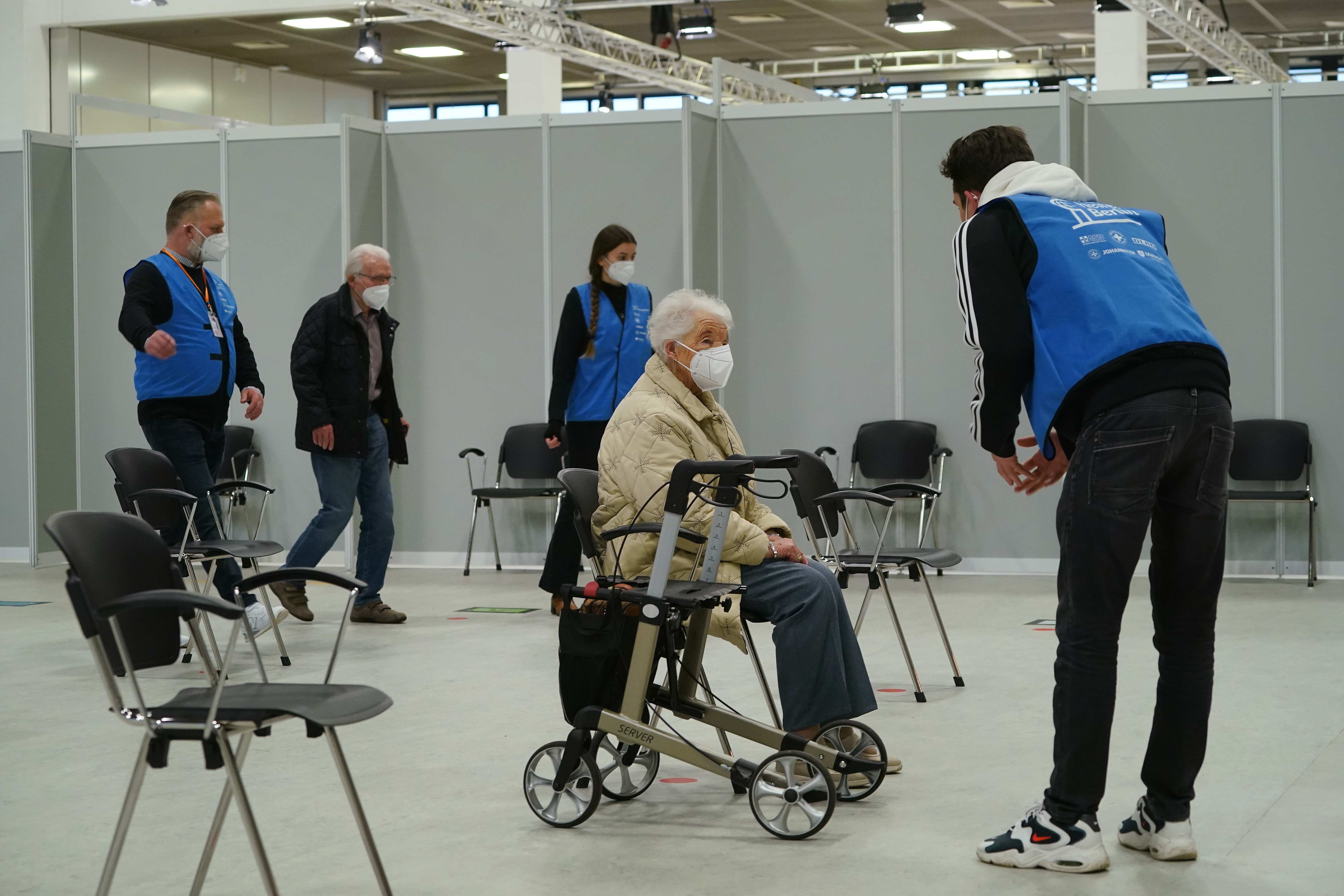 The vaccine center at the Messe Berlin trade fair grounds is the third to open in Germany's capital. /Sean Gallup/AFP

The vaccine center at the Messe Berlin trade fair grounds is the third to open in Germany's capital. /Sean Gallup/AFP

In the UK, the vaccine roll-out will continue, with people aged over 70 and those listed as extremely vulnerable invited to book appointments from today, as 10 new mass-vaccination centers open across England, adding to the seven existing mass-vaccination sites.

Around 3.8 million people have already received jabs, with the government confirming 140 are being given each minute.

Meanwhile, the UK's vaccines minister, Nadhim Zahawi, has announced that clinics offering jabs on a 24-hour basis will be piloted in London before the end of the month. He also said the government's target to give all adults the first dose by September is achievable.

The closure of all travel corridors also came into effect at 4 a.m. today. All passengers will have to show proof of a negative COVID-19 test within 72 hours of traveling and they will have to isolate for up to 10 days on arrival, a negative test after five days will allow them to come out of isolation.