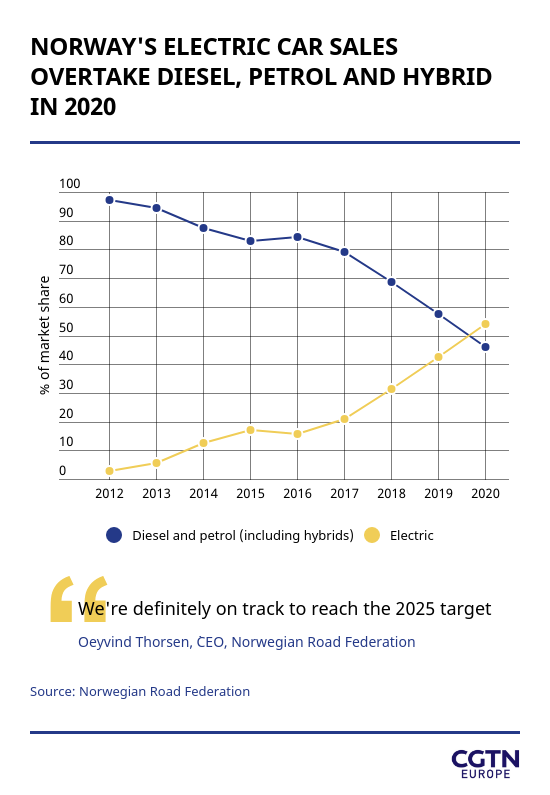 It is the first time any country has recorded more electric car sales than combustion models and comes 10 years after such vehicles made up just 1 percent of Norway's new car market.

According to the data, electric vehicles made up 54.3 percent of all new cars sold in Norway last year, an increase of more than 10 percent on the previous year (42.4 percent).

Norway is seeking to end the sales of all petrol and diesel cars by 2025 and has imposed heavy subsidies on those who purchase one.

While electric cars had broken the 50 percent market share barrier on a monthly basis, 2020 was the first time they outsold all other vehicles across the entire year.

There were 141,412 new cars sold across the country last year, with 76,789 of them fully electric vehicles.

Elsewhere, diesel only cars have fallen from 64.3 percent of Norway's market share in 2012 to just 8.6 percent last year. 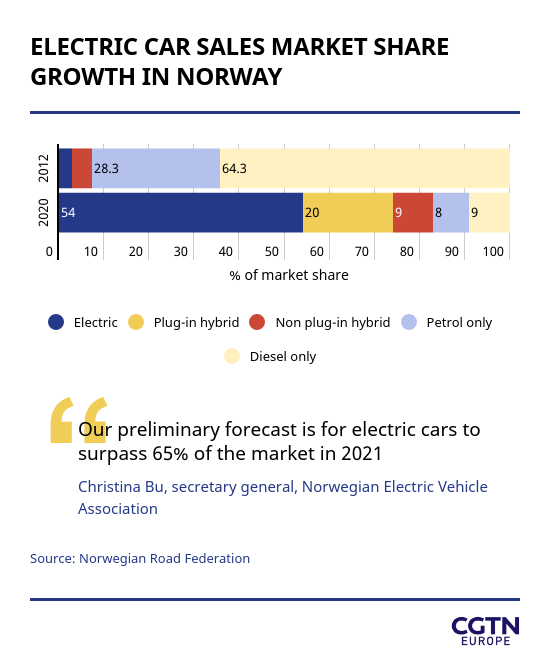 Sales of electric cars are expected to soar further in 2021, according to industry analysts and car distributors, as more vehicles and models enter the market.

"Our preliminary forecast is for electric cars to surpass 65 percent of the market in 2021. If we manage that, the goal of selling only zero-emission cars in 2025 will be within reach," said Christina Bu, secretary general of the Norwegian Electric Vehicle Association.

But while the electric market share is expected to continue to rise in Norway, there is uncertainty as to which car producers will allocate their vehicles to Norway, amid a growing demand across Europe, according to Harald Frigstad, CEO of Norwegian car importer Bertel O. Steen.

Frigstad believes around 70 percent of the cars he sells in 2021 will be fully electric models.