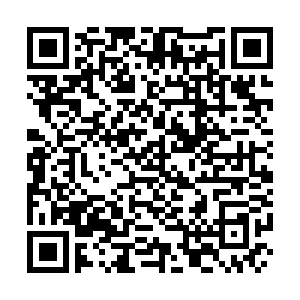 "We've seen sovereign and private donors from across the world dig deep and meet this target and help ensure that every country will get access to COVID vaccines, not just the wealthy few."

That was Seth Berkley, the CEO of the vaccine alliance GAVI, after the group, along with the World Health Organization, announced that more than $2 billion dollars was raised by countries and organizations globally for an advance market commitment (AMC) to buy an initial 1 billion COVID-19 vaccine doses for 92 eligible countries that would otherwise not be able to afford them.

The optimistic vaccine news is still dominating headlines, though it has definitely been a roller-coaster week in many regards. Scroll down to read our interview with market analyst Joshua Mahony about what's been happening on that front.

If you're a superstitious person, you'll be aware that it's an "unlucky" day today – Friday 13.

One person who was definitely having an unlucky day was Carlos Ghosn. The civil trial of the disgraced former Nissan boss has begun, in which he is being sued for almost $100 million by his former employer.

In other news, airline alliances have called on governments to roll out more testing at airports, rather than quarantines and travel bans, as they find themselves struggling once more amid a second wave of lockdowns.

Watch our video below to see just what this would look like at airports, as German airline, Lufthansa, trials its first fully "COVID-negative" flight.

More than $2 billion has been raised by a facility set up by the GAVI vaccine group and the World Health Organization (WHO) to buy and distribute COVID-19 vaccines for poorer countries. The funds will allow it to buy an initial 1 billion doses for 92 eligible countries, the GAVI alliance said in a statement on Friday.

Carlos Ghosn, the disgraced former Nissan chairman, has found himself in deeper legal trouble, with his former employer suing him for $95 million in damages as the first day of the civil trial starts in Yokohama, Japan.

G20 finance ministers have agreed for the first time on Friday a new historic joint framework for restructuring government debt in anticipation that the coronavirus crisis will leave some poor countries in need of deep debt relief.

British employers actively advertised 1.36 million jobs in the first week of November, the most job adverts since early March, although many sectors remain hard-hit by the COVID-19 pandemic, according to The Recruitment and Employment Confederation. The trade body said the strongest recovery was in construction, logistics and food processing, although Britain's unemployment rate rose in the third quarter of 2020 to its highest since late 2016.

Looking to adapt to changes in the automotive sector, German car maker Volkswagen has said it plans to invest 73 billion euros ($86.3 billion) in e-mobility, hybrid technology and digitalization within the next five years. Around $41.4 billion will be invested in e-mobility, while $13 billion will be put aside for the development of new hybrid cars.

Two European Central Bank policymakers have warned that although the prospect of an effective vaccine against COVID-19 is a source of relief, the eurozone is still set to suffer from new curbs on economic activity to combat a rise in infections.

Fifteen Asia-Pacific economies, including China, Japan, South Korea, Australia, New Zealand and the 10 members of ASEAN, are set to conclude talks on Sunday and sign what could become the world's largest free trade agreement, covering nearly a third of the global population and about 30 percent of its global gross domestic product. The new free trade zone will be bigger than both the US-Mexico-Canada Agreement and the European Union.

Cutting it close to the end of the Brexit transition period at the end of this year, Britain and the European Union have so far failed to close gaps between their positions on two of the thorniest issues that have long dogged the negotiations: competition rules and fishing, and will resume trade talks in Brussels on Monday.

Google CEO Sundar Pichai has apologized to Europe's industry chief Thierry Breton over a leaked internal document (which Pichai says he had not seen and not signed off) outlining a proposed 60-day strategy to counter the European Union's push for new tech regulations by getting U.S. allies to push back against Breton.

Watch: Lufthansa has trialed its first fully "COVID-negative" flight as the German airline tries to restore confidence in travelers and claw back a $2 billion loss this year. 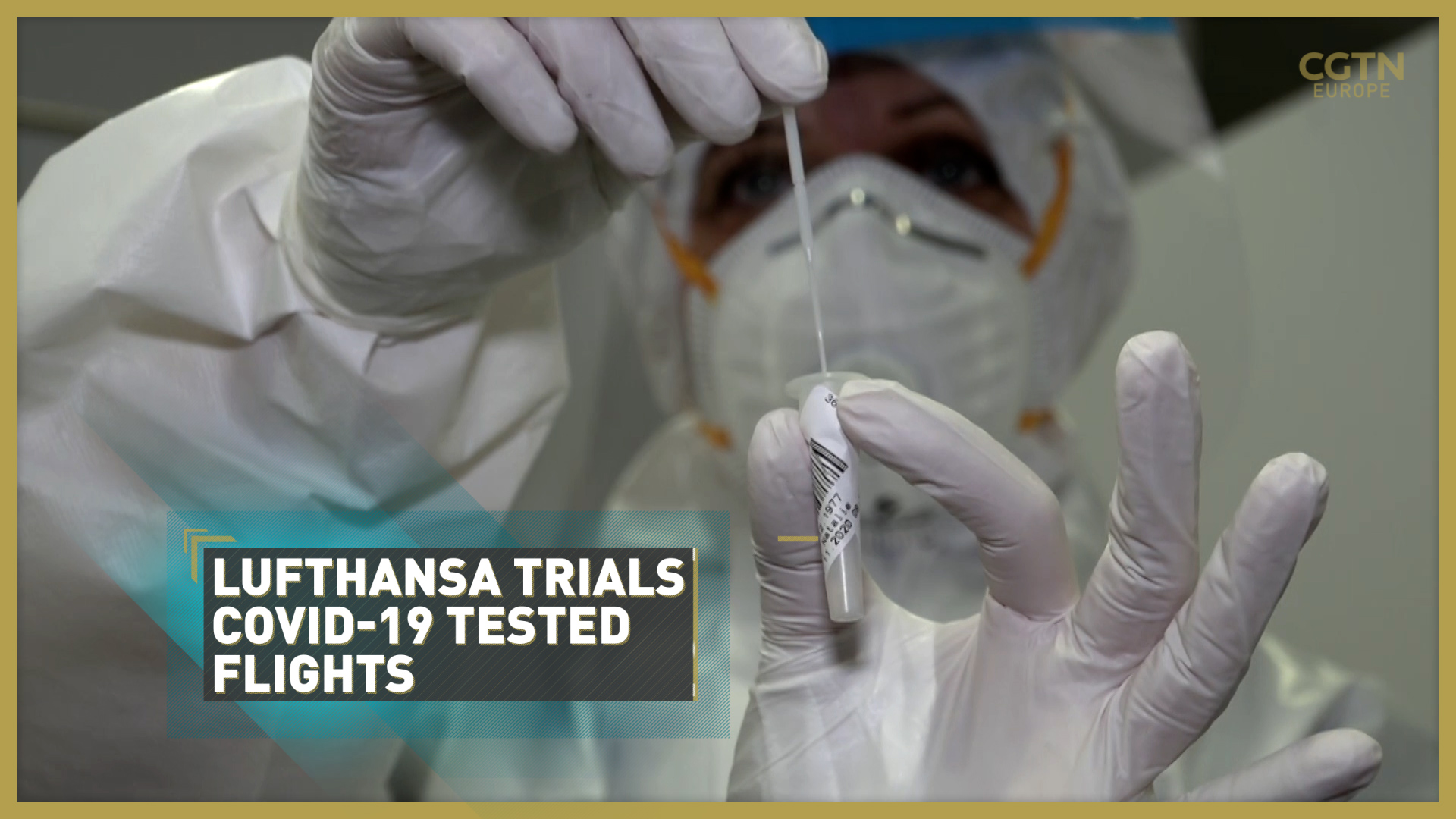 CGTN Europe spoke to Joshua Mahony, senior market analyst at trading group IG, about the state of the markets during what has been a tumultuous week in many regards.

Well, we have the initial vaccine euphoria, but central banks are saying don't get too excited, aren't they?

We're still looking at the potential for us to see significant rises in cases of further lockdowns down the line. And, of course, that's going to restrain the economic outlook for the time being.

This week there's been a political backdrop, too, on both sides of the Atlantic, hasn't there?

But it doesn't necessarily feel like the markets are too worried about the fact that Donald Trump wants to take this [election result] to the courts. But certainly, the longer he leaves it and the more he pushes it without actually conceding, the more the markets are probably going to have to start to factor in 'what if?'.

In terms of the UK, of course, we have got the fact that it's now just over a month and a half until the UK leaves the EU and it feels like we're no closer to a deal with the EU. That, of course, is a big worry.

And as it stands, we just haven't seen enough progress to actually get us towards a position where markets can be particularly confident that we actually will get a decent deal.

A decent Brexit trade deal, is that what investors are waiting for? And if not, what are they waiting for?

I think Brexit is going to be key for UK investors, but it's worthwhile noting that if you're looking from an investment standpoint, the likes of the FTSE 100 is probably going to be trading on the inverse to the pound.

So you're either going to be – if you're looking at the FTSE 100 – looking a lot at expectations around Brexit, how that's influencing the pound and that's going to have a knock-on impact. Whereas those domestically focused stocks and the likes of the FTSE 250 and the like, that's what's really going to be reflecting sentiment around that deal or no-deal scenario.

I think that 'what if?' is elevating the pound for the time being.

Recent Eurostat figures show that EU employment dropped by 2 percent in the second quarter of 2020, from 200 million a year earlier.

Meanwhile, the number of people employed as "professionals" rose (+5%), these include people highly skilled in domains such as science and engineering, health, teaching, business and administration, information and communications technology and legal, social and cultural fields, and is the most common occupational group among EU workers. 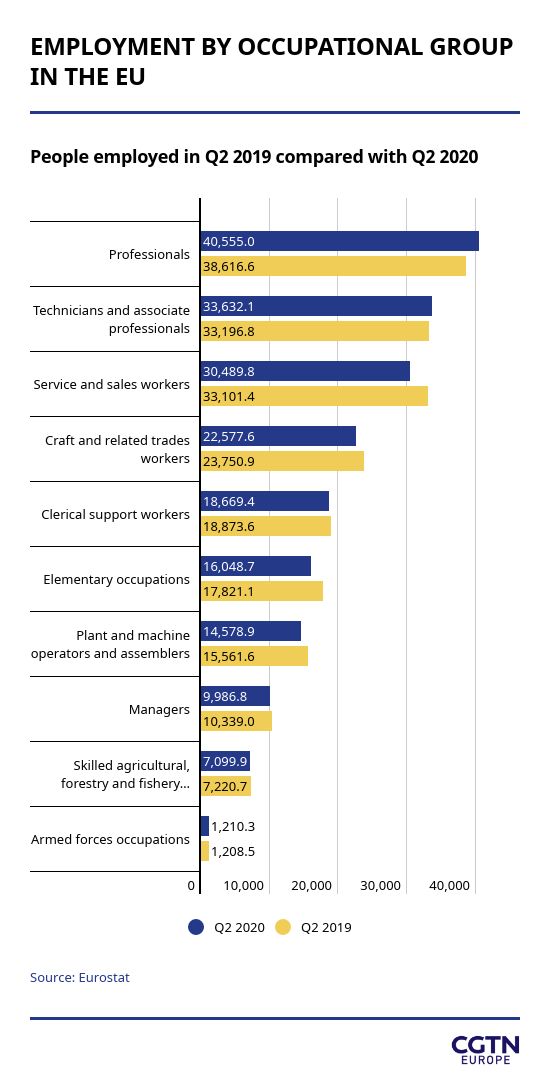