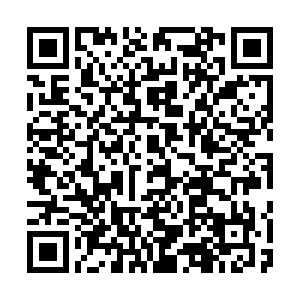 Drug company Pfizer has said its experimental COVID-19 vaccine is more than 90 percent effective, an announcement that is being greeted as a major victory in the fight against the coronavirus pandemic.

Pfizer and German partner BioNTech are the first drug makers to release successful data from a large-scale clinical trial of a vaccine, with their analysis showing a much better performance than most experts had hoped for from coronavirus vaccines.

While questions remain about for how long the vaccine will provide protection, BioNTech CEO Ugur Sahin said he was optimistic its immunisation effect would last for a year.

With the companies set to seek authorization for the vaccine's emergency use this month, Albert Bourla, Pfizer's chairman and CEO, described it as "a great day for science and humanity."

"We are reaching this critical milestone in our vaccine development program at a time when the world needs it most, with infection rates setting new records, hospitals nearing overcapacity and economies struggling to reopen."

Health experts say Pfizer's results were positive for all vaccines currently in development, showing the inoculations were going after the right target and proof that the coronavirus can be halted through vaccination.

"It is a relief to see such positive results on this vaccine and it bodes well for COVID-19 vaccines in general," said Peter Horby, professor of emerging infectious diseases at the University of Oxford. "This news made me smile from ear to ear."

Pfizer is set to seek broad U.S. authorization for emergency use of the vaccine, but will first need two months of safety data from about half the study's 44,000 participants, which is expected late this month.

"I'm near ecstatic," Bill Gruber, one of Pfizer's top vaccine scientists, said in an interview. "This is a great day for public health and for the potential to get us all out of the circumstances we're now in."

Pfizer and BioNTech have a $1.95 billion contract with the U.S. government to deliver 100 million vaccine doses beginning this year and have also discussed supply agreements with the European Union, the UK, Canada and Japan.

The EU on Monday was set to sign a contract for 300 million doses of the vaccine, the head of the European Commission Ursula von der Leyen announced on Twitter on Monday.

The companies started manufacturing the vaccine before being sure of its effectiveness, in order to save time. They are now set to produce up to 50 million doses this year, enough to protect around 25 million people, alongside 1.3 billion doses in 2021.

The companies' interim analysis was conducted after 94 participants in the trial developed COVID-19, and examined how many of them had taken the vaccine versus a placebo. More than 90 percent effectiveness implies that no more than eight of the 94 people who caught the virus had been given the vaccine.

With the U.S. Food and Drug Administration only requiring 50 percent effectiveness for a coronavirus vaccine, the Pfizer shot has exceeded expectations.

To confirm the efficacy rate, Pfizer said it would continue the trial until there were 164 COVID-19 cases among participants, expected to be completed before the end of November, but the data will first have to be peer-reviewed or published in a medical journal. 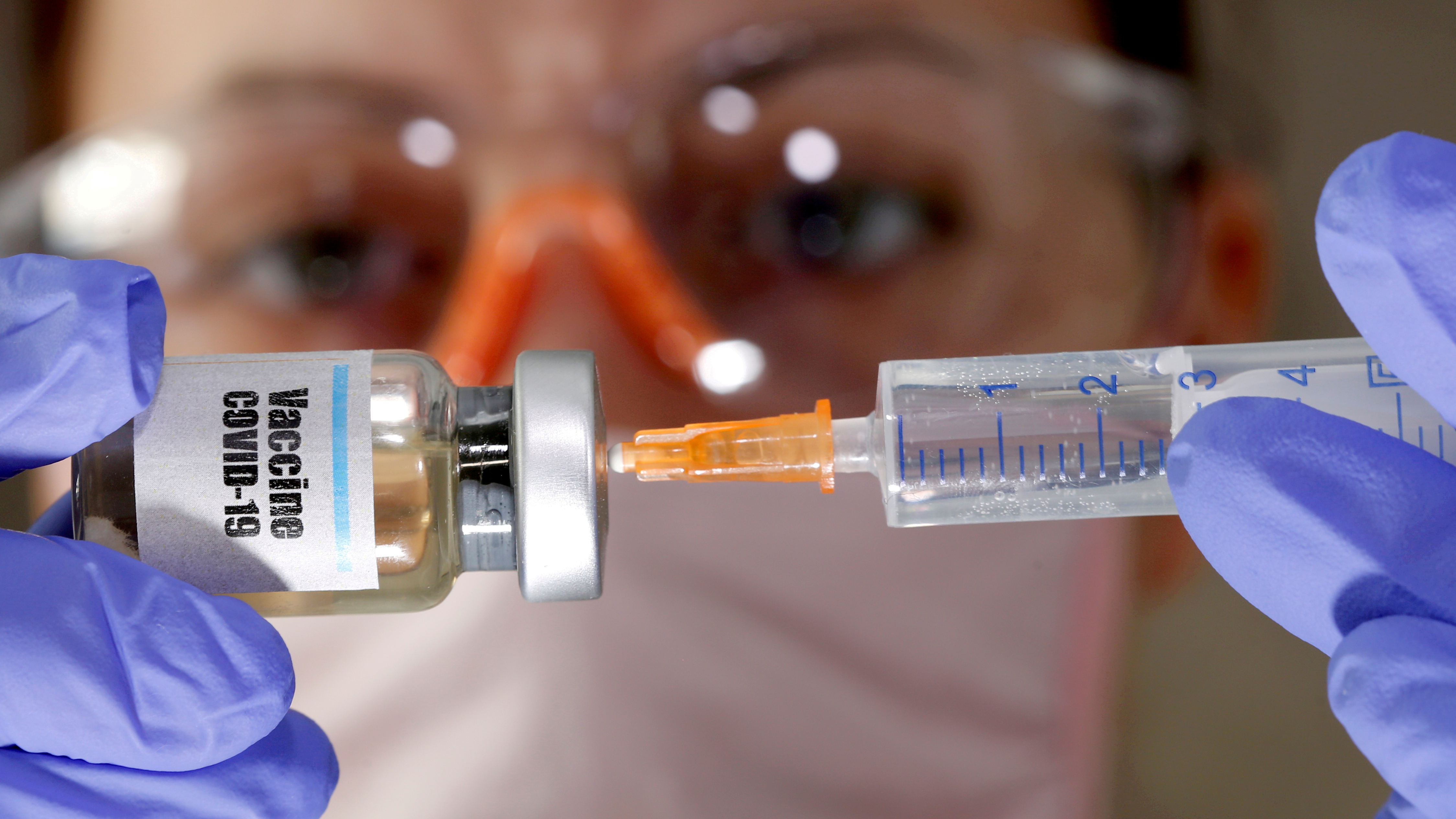 The prospect of a vaccine has boosted global stock markets, with the S&P 500 futures hitting a record high and travel and tourism shares trending upwards.

Conversely, shares in companies that have boomed during the pandemic dropped, including conferencing platform Zoom Video Communications, which was down 12 percent at one stage.

Pfizer shares were up around 7 percent in early trading in New York, while BioNTech's stock was up nearly 23 percent in Frankfurt. "Light at the end of the tunnel. Let's just hope the vaccine deniers won't get in the way, but 2021 just got a lot brighter," said Neil Wilson, chief market analyst at Markets.com.

Shares of other drug makers in the final stage of vaccine testing also rose, with Johnson & Johnson up 4 percent in pre-market trading and Moderna up 7.4 percent.

"The efficacy data are really impressive. This is better than most of us anticipated," said William Schaffner, an infectious diseases expert at Vanderbilt University School of Medicine, Nashville, U.S.. "The study isn't completed yet, but nonetheless the data look very solid." 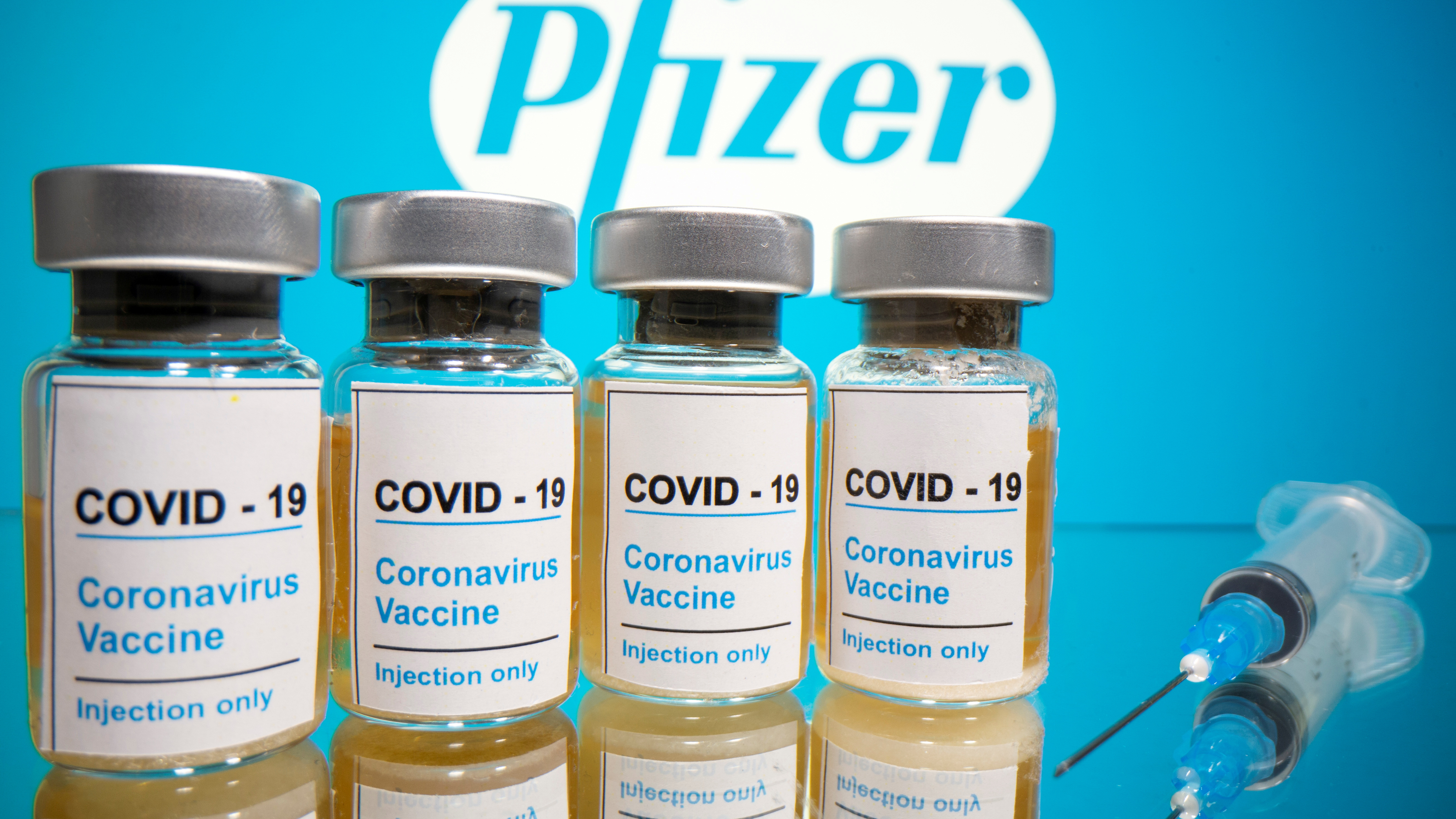 European Commission President Ursula von der Leyen said the EU on Monday was set to sign a contract for millions of doses of the Pfizer vaccine. /Dado Ruvic/Reuters

European Commission President Ursula von der Leyen said the EU on Monday was set to sign a contract for millions of doses of the Pfizer vaccine. /Dado Ruvic/Reuters

Projected president Joe Biden said the news was excellent, but stressed that other measures including face masks and social distancing would be needed well into next year.

In Europe, UK Prime Minister Boris Johnson said that, while Britain was ready to roll out a mass vaccination program, it was too early to rely on a vaccine as a solution to the coronavirus.

"We've talked for a long time, about the distant bugle of the scientific cavalry coming over the brow of the hill," Johnson told a media conference: "I can tell you tonight that today, that toot, that bugle, is louder, but it's still some way off. We absolutely cannot rely on this news, as a solution."

Germany's health minister, Jens Spahn, while encouraged by the Pfizer announcement, said he did not expect a shot to be available before the first quarter of 2021.

This thinking was echoed by senior World Health Organization (WHO) official Bruce Aylward, who said a vaccine could be rolled out for the most vulnerable by March 2021, adding that such a development could "fundamentally change the direction and dynamic of this crisis."

While about 200 COVID-19 vaccine candidates are in development globally, with dozens in human clinical trials, no shot has actually crossed the finish line and been approved, though the one from Pfizer-BioNTech appears to be on track.

Mirroring projections from the WHO, Germany's Chancellor Angela Merkel said on Sunday that only when 60 to 70 percent of the population had achieved immunity, either through vaccination or having caught the virus, could COVID-19 be deemed to have been "more or less overcome."