Birmingham stabbings: What we know so far
Arij Limam 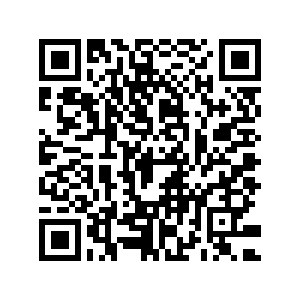 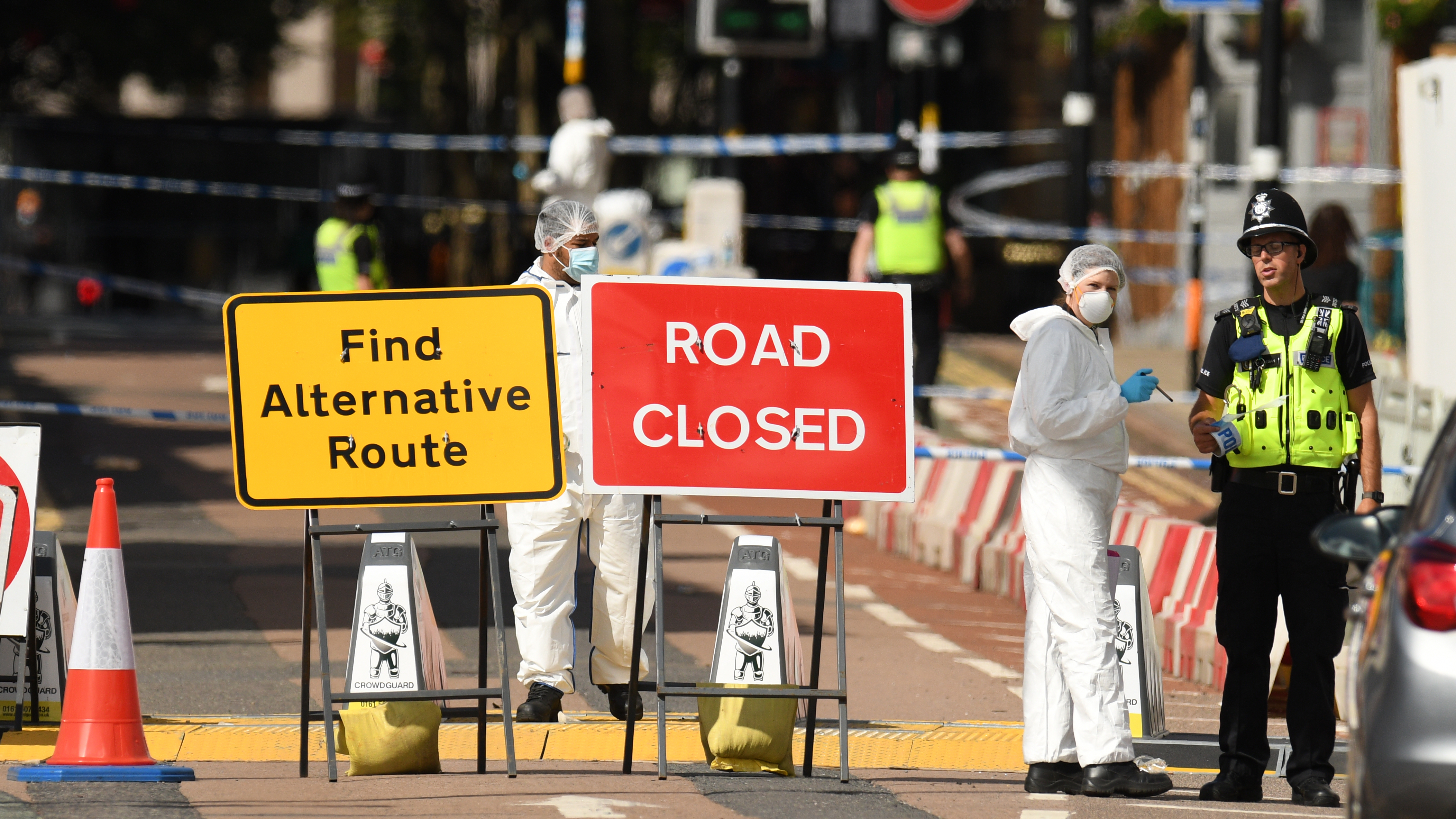 A major incident was declared in the city of Birmingham in the UK's Midlands after a spate of stabbings led to one man dead and several injured on Sunday. /Oli Scarff/AFP

A major incident was declared in the city of Birmingham in the UK's Midlands after a spate of stabbings led to one man dead and several injured on Sunday. /Oli Scarff/AFP

UK police have arrested a 27-year-old man on suspicion of murder and seven counts of attempted murder following a series of stabbings in the city of Birmingham in the English Midlands on Sunday. Local authorities declared the situation a "major incident."

Here's what we know so far:

The lone knife-attacker began his stabbing spree in the early hours of Sunday morning. He continued for nearly two hours, attacking victims in four different locations. 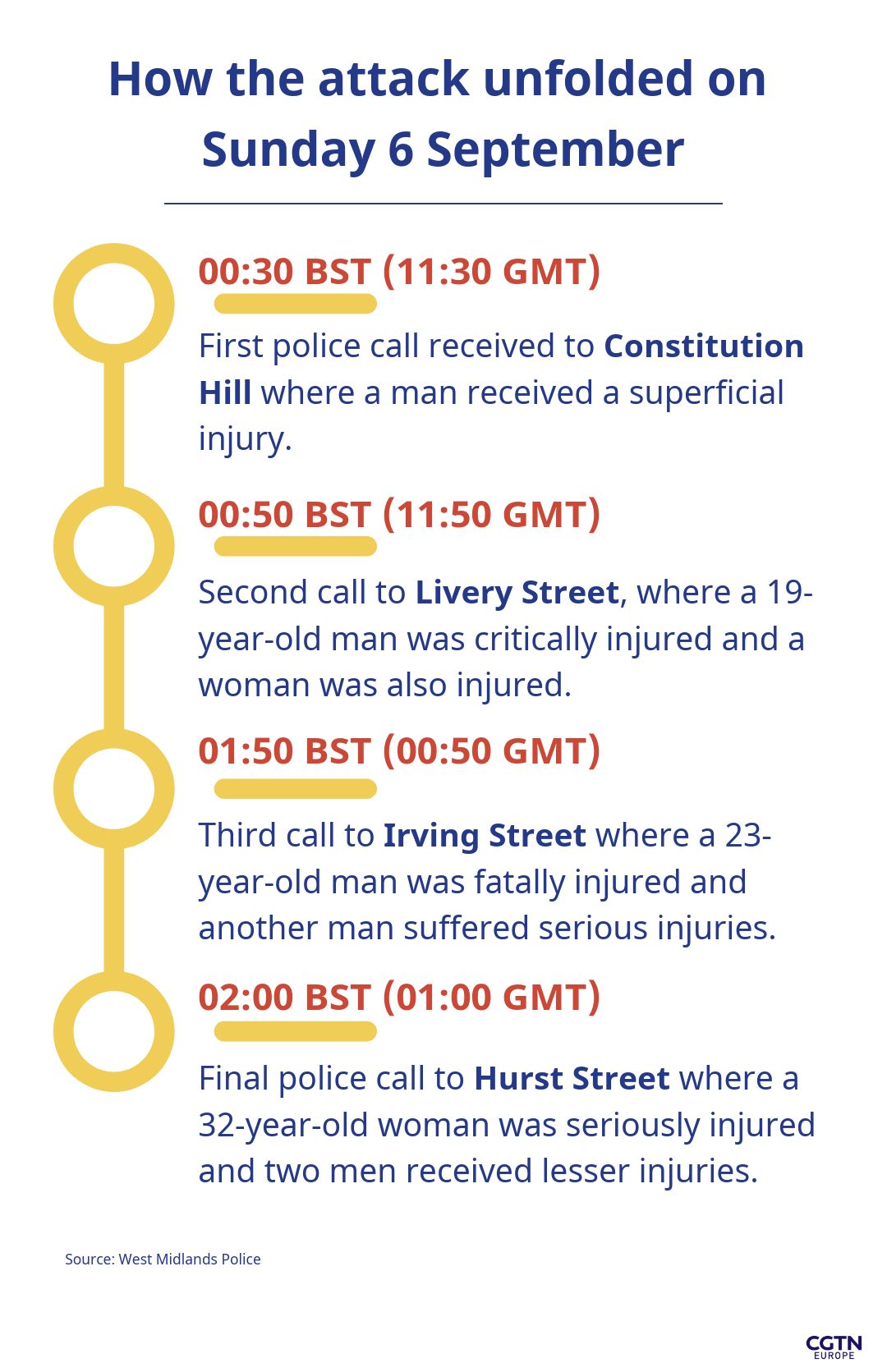 The final location is an area known as the city's "Gay Village," where people had been seated at outdoor tables eating and drinking.

Officers ruled out a hate crime and said the attacks on the victims appeared to be random and that the incident was being treated as a homicide. They also rejected any links to gang violence or terrorism.

"At this stage we believe that the attacks were random and we have no indication of a motive," West Midlands Police Chief Superintendent Steve Graham said.

A 23-year-old man died following the injuries he sustained during the stabbing attack.

A man aged 19 and a woman aged 23 are still being treated in hospital and are in a critical condition following the attack.

The remaining five victims, aged between 23 and 33, were less seriously injured and were taken to hospital for treatment. So far, two of the five have been discharged. 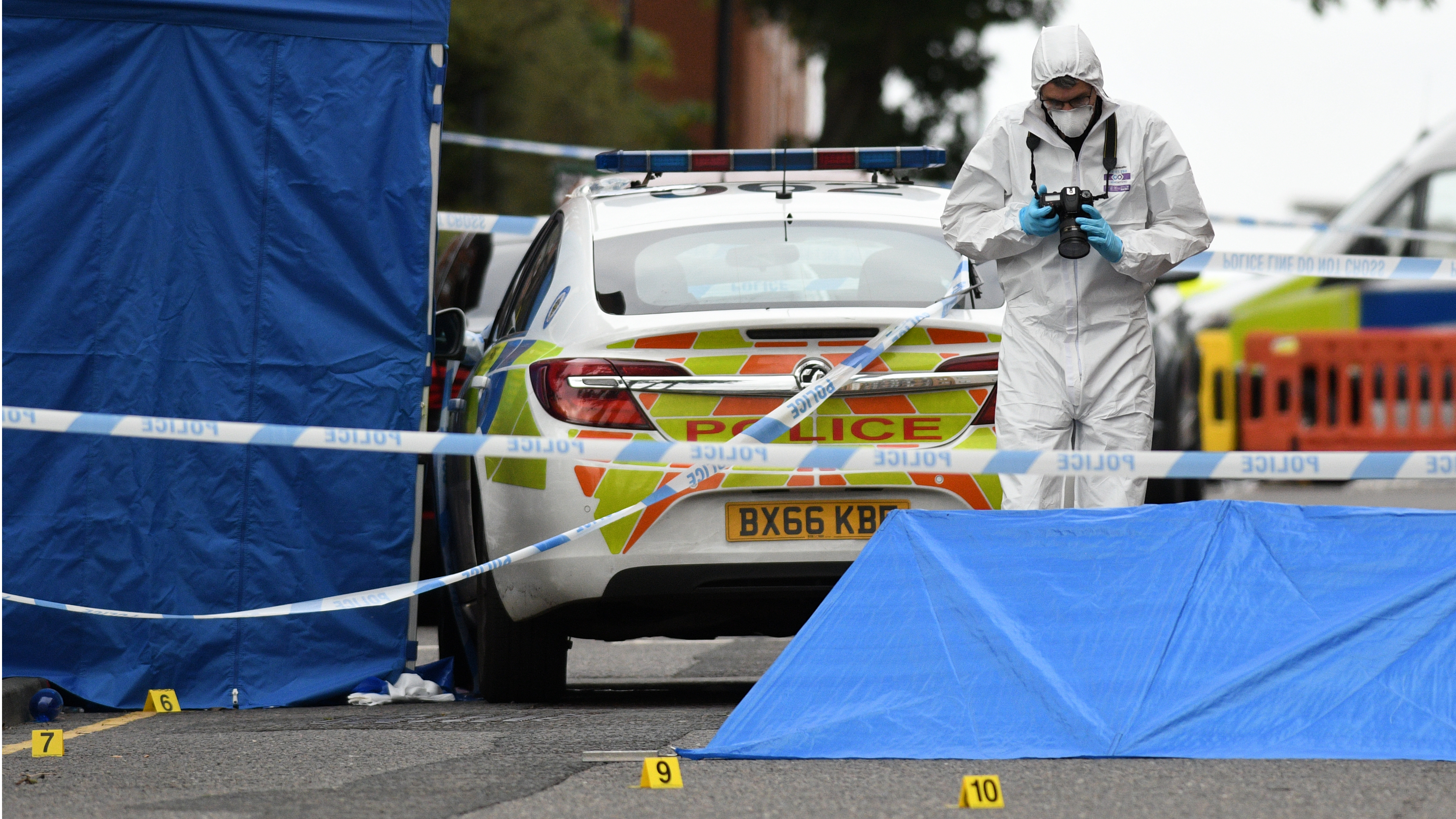 One man was killed in the attack, while seven others were injured. /Oli Scarff/AFP

One man was killed in the attack, while seven others were injured. /Oli Scarff/AFP

A 27-year-old man has been arrested on suspicion of murder and seven counts of attempted murder over the series of stabbings.

West Midlands Police said the man was detained at an address in the Selly Oak area of Birmingham at 04:00 BST on Monday 7 September.

"Officers worked through yesterday and into the early hours of this morning in a bid to trace the man we believe responsible for these terrible crimes," said Graham.

"We issued CCTV footage of the suspect and had a strong response from the public. I'd like to thank everyone who shared our appeal and who provided information to the investigation," he added.

But while detectives said this was a crucial development, the police investigation into the attacks continues and witnesses are being asked to come forward with more information or video footage of the incident.

• Brexit back in crisis as UK sets October 15 deadline for Brexit deal, EU worries about negotiations
• Russia's Bolshoi theater opens 245th season with a socially distanced opera
• Why restoring the oyster population could create cleaner seas around the UK

UK Prime Minister Boris Johnson sent condolences to the victims of the attack and tweeted: "All my thoughts are with those affected by the terrible incident in Birmingham last night. My thanks to the emergency services who are working hard at the scene."

Shabana Mahmood, who is the member of parliament for Birmingham, Ladywood, for the main opposition Labour Party, described the events as "deeply concerning," and extended her sympathies to the victims and their families.

In a tweet on Sunday, Mahmood also thanked the West Midlands Police for their "coordinated response" and for "acting quickly" to restore order and keep people safe.

But she urged local residents to "refrain from sharing speculation online about the incident as investigations are still ongoing."

Some have been questioning how the suspect was able to move around the city and carry out a series of attacks for 90 minutes without being stopped. Mahmood told the BBC that she "shares the same concerns as everybody else," but the priority was supporting the police with their investigation.

The stabbings took place at a time when nightlife is gradually resuming across city centers in the UK following the national coronavirus lockdown.

Official statistics show knife crime is on the rise in the UK, where most guns are outlawed, although the number of homicides with blades fell in 2019 from the year before.