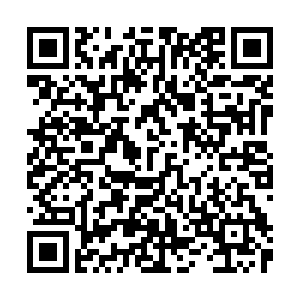 • Belgium will tighten restrictions from Saturday after a rise in infections, Prime Minister Sophie Wilmes said, requiring the use of face masks in crowded outdoor public spaces and tracing measures at restaurants and bars.

• The World Health Organization chief Tedros Adhanom Ghebreyesus rejected as "untrue and unacceptable and without any foundation" an allegation by US Secretary of State Mike Pompeo that he owed his position to a deal with China.

• An outbreak of the coronavirus in a Czech music club has grown to 98 positive cases, with another 273 quarantined. Authorities suspect one woman with no symptoms was the source of the infection at a birthday party on 11 July, amid media reports that some visitors were infected by sharing a drink with one straw.

• World Health Organization chief Tedros Adhanom Ghebreyesus has warned that transmission remains "intense" in a "relatively small group of countries." He told a Geneva briefing that "two-thirds of all cases are from 10 countries," while "almost half of all cases reported so far are from just three countries."

• A Madrid official has said face masks should be worn even at home if you are with people you do not live with. In most of Spain, masks must be worn in public regardless of safe distances, but with no rules on wearing them at home.

• The European Union has granted Honduras $93 million in aid to help the impoverished Central American nation's health system cope with the pandemic. Hospitals are struggling in country, which has registered 35,345 COVID-19 infections and 988 deaths.

• Eurozone bond yields held near multi-month lows on Thursday, with demand for fixed income supported by U.S.-China tensions and hopes the bloc will bounce back quickly from the impact of COVID-19 given this week's recovery fund deal.

• A Swiss health department has warned that plastic face shields alone do not offer protection against COVID-19, after an outbreak among wearers at a Graubünden hotel. Those who wore face masks as opposed to plastic shields have not tested positive.

• Russia reported 5,848 new cases on Thursday, pushing its national tally to 795,038, the fourth largest in the world. Officials said 147 people had died in the past 24 hours, taking the country's official death toll to 12,892. 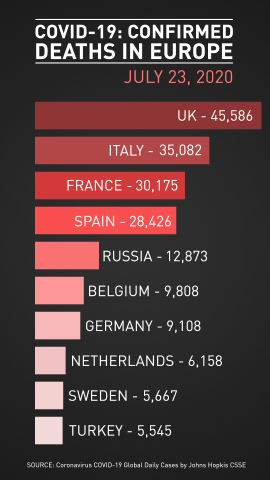 The World Health Organization Director-General Tedros Adhanom Ghebreyesus rejected as "untrue and unacceptable and without any foundation" an allegation by U.S. Secretary of State Mike Pompeo that he owed his position to a deal with China.

Pompeo told a private meeting of MPs in the UK on Tuesday that the WHO had become a "political" body, alleging its decisions were influenced by China, having helped Adhanom Ghebreyesus to become its head, according to quotes in The Times and The Daily Telegraph newspapers.

"When push came to shove, when it really mattered most," people died "because of the deal that was made," he was reported to have said.

Asked about Pompeo's allegations during a virtual press conference, the WHO chief insisted that the "sole focus ... of the entire organization is on saving lives. The WHO will not be distracted by these comments and we don't want the entire international community also to be distracted."

He warned that one of the "greatest threats in the current crisis is the politicization of the pandemic."

"COVID-19 does not respect borders, ideologies or political parties," he said. "COVID politics should be quarantined."

U.S. President Donald Trump has been critical of the WHO for months and has said the U.S. is leaving the organization. WHO COVID-19 technical lead Maria Van Kerkhove, who is an American citizen, also rejected the claims.

"I have never been more proud to be WHO," she said. "I see first-hand every day the work that Dr Tedros does ... that our teams do, all over the world," she said.

Authorities in Berlin are attempting to track down guests who spent the evening at an inner city bar on 10 July, after a coronavirus scare.

At least 10 people who attended the MIO restaurant and bar that night have tested positive for the virus. It's reported many came from outside Berlin.

Bars and restaurants have been allowed to reopen since June in Germany, provided hygiene measures and social distancing are implemented.

German health authorities have reported 569 new COVID-19 infections in the past 24 hours.

The European Parliament convenes a special plenary session today, in which members will set out their conditions to sign off on the $2 trillion recovery fund and long-term budget package approved by EU leaders earlier this week.

Criticism is mounting over proposed funding cuts to health, research and climate initiatives. MEPs have also taken issue with the "weak" nature of the rule of law conditionality, the increase in rebates and they want new revenue streams that will help offset the debt incurred by the $860 billion recovery fund.

European Parliament President David Sassoli said these "mistakes" in the long-term budget need to be corrected before MEPs will sign off on the deal.

European Commission President Ursula von der Leyen and Council President Charles Michel will get their chance to defend the deal in parliament today, but it's likely to just be day one of a months-long negotiation.

This comes after the government made it mandatory to wear a face covering in indoor public spaces, with a fine of $150 for non-compliance. Wearing a face mask on public transport has been obligatory since mid-May.

Veran said: "It is obvious that France will not leave people unable to equip themselves with masks."

The move is aimed at curbing the coronavirus, especially in the capital, because the number of cases "is rising slowly" but "continuously" in the Paris region, according to the director of Paris hospitals. 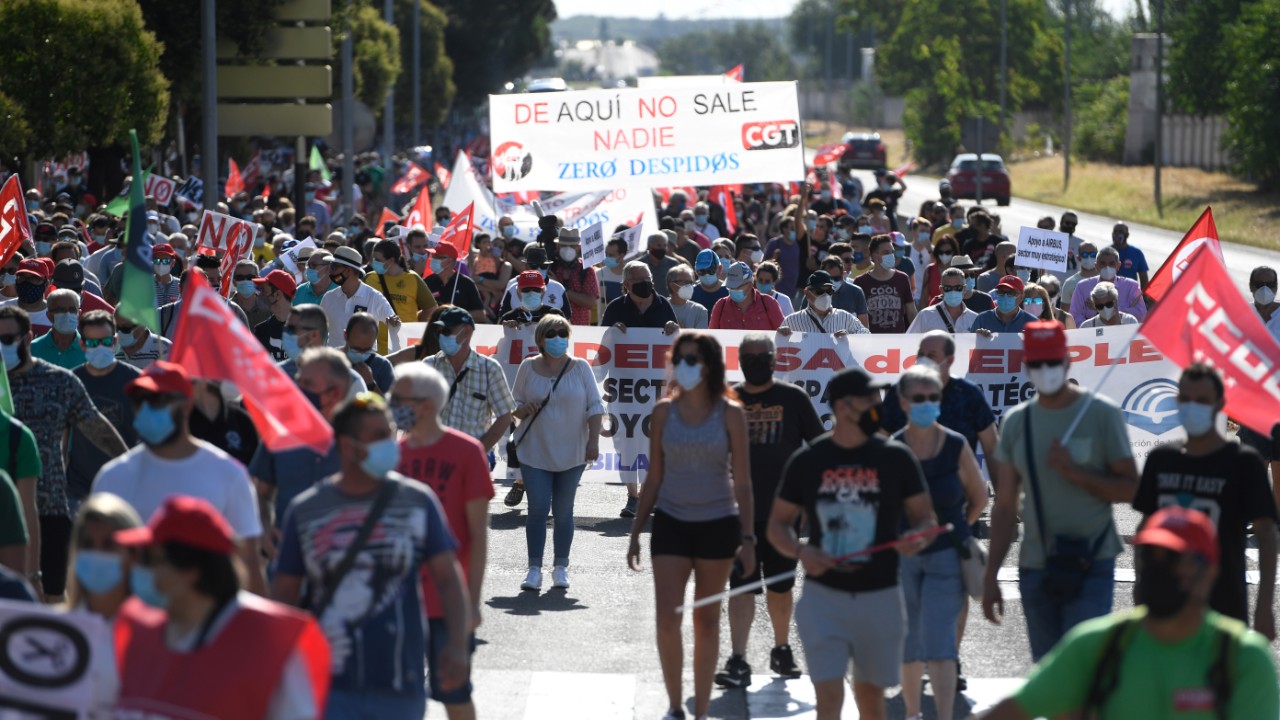 A march in Getafe, near Madrid, on Thursday by employees of pan-European aerospace giant Airbus against job cuts. /Pierre-Philippe Marcou/AFP

A march in Getafe, near Madrid, on Thursday by employees of pan-European aerospace giant Airbus against job cuts. /Pierre-Philippe Marcou/AFP

The markets' reaction to the latest escalation in tensions between the U.S. and China has been muted. Even the bumper EU recovery package agreed earlier this week failed to steady markets on Wednesday as European indices wobbled.

And while market-watchers have an eye on the slew of big corporate results filtering through this week, investors are wondering what the next big catalyst will be to drive the markets higher.

"Better-than-anticipated earnings from the likes of Tesla and Microsoft are not the true reason why stocks are at current levels. It is because monetary and fiscal intervention has left few options for investors to park their money," said Hussein Sayed, chief market strategist at FXTM. "Gold continues to be a safer bet than chasing overvalued stocks."

Earnings in focus on Thursday include Swiss drug maker Roche, which posted a 5 percent fall in net profit for the first half of the year.

Anglo-Dutch consumer goods firm Unilever's fall in quarterly sales was smaller than analysts had been expecting, which sent their shares higher in early European trade.

As Daimler reported a second-quarter loss of $1.95 billion, the German auto maker noted the business had been hit by showroom closures and a slump in demand during lockdowns, but expects a rise in operating profit as sales rebound.

"Due to the unprecedented COVID-19 pandemic, we had to endure a challenging quarter. But our net industrial liquidity is a testament to effective cost control and cash management, which we must continue to enforce," said Ola Källenius, chairman of the board of management of Daimler and Mercedes-Benz. "We are now seeing the first signs of a sales recovery – especially at Mercedes-Benz passenger cars."

Twitter's second-quarter earnings are due later on Thursday. The results could have a big impact on stock. Shares fell 7.8 percent when it reported first-quarter results three months ago.

The company beat revenue estimates and matched views on earnings, but analysts didn't get the reassurance they wanted about signs of recovery.

"At the end of last year, Twitter passed an important milestone, passing $1 billion in revenue in a quarter for the first time, largely as result of better performance from advertising revenues," said Michael Hewson, chief market analyst at CMC Markets.

"The company got egg on its face last week after some high-profile U.S. political and business figures' accounts were hacked by a bitcoin scam, causing Twitter to have to temporarily disable their accounts. Apart from the embarrassment, this event poses a number of questions over Twitter's procedures… This week's numbers are unlikely to reassure."

CGTN Europe podcast: Notes on a pandemic: Office of the future