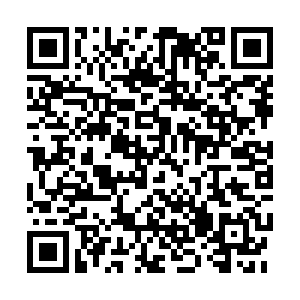 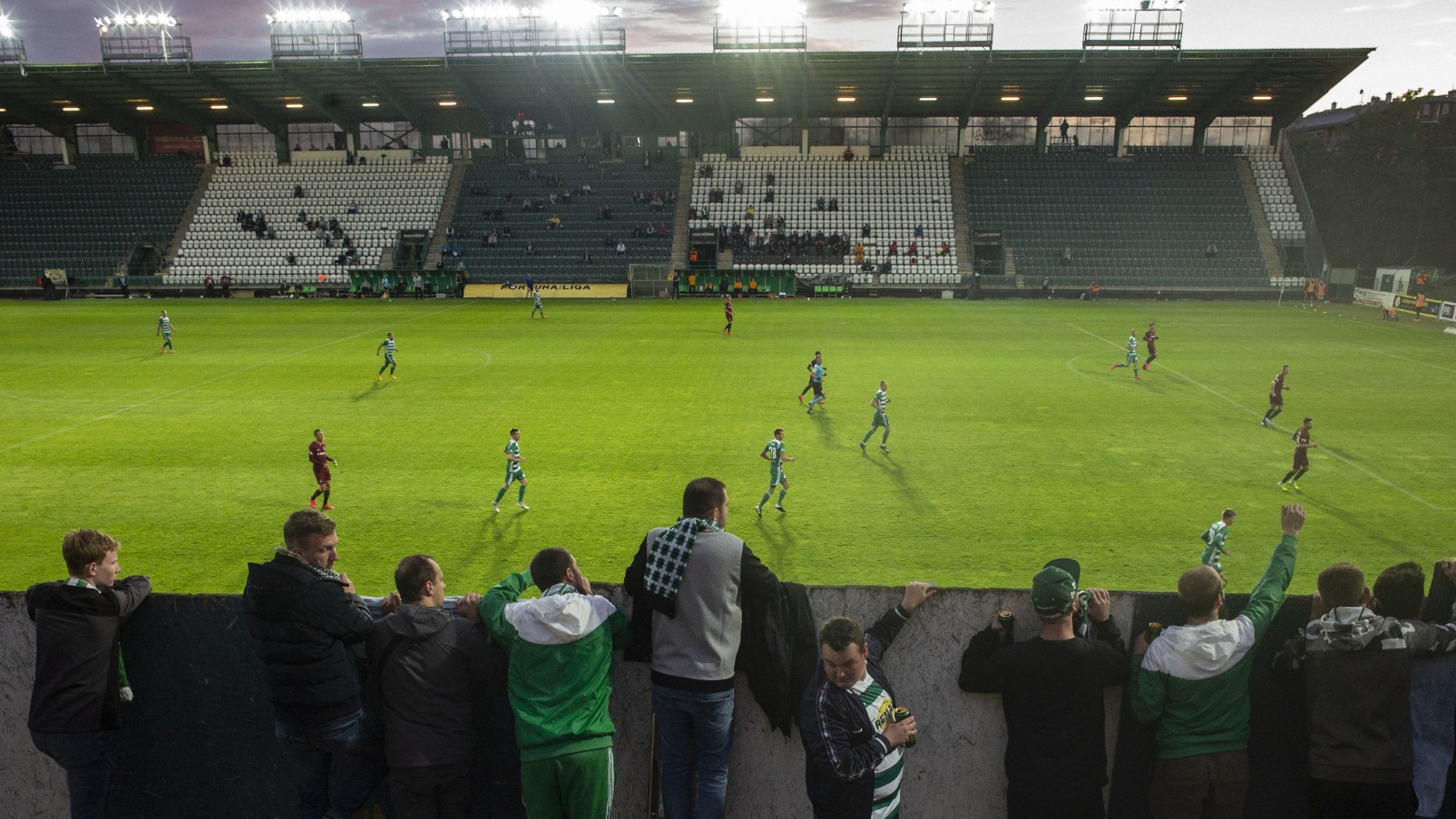 Football fans across Europe have to get creative to watch live action with many games played behind closed doors. /Michal Cizek/AFP

Football fans across Europe have to get creative to watch live action with many games played behind closed doors. /Michal Cizek/AFP

Very few things have the power to stop the juggernaut that is elite European football in its tracks, but COVID-19 has rendered stadiums across the continent eerily silent.

Yet even with the beautiful game to return to four of Europe's 'Big Five' leagues by the end of the month – the English Premier League, Spain's La Liga and Serie A in Italy are to follow the German Bundesliga's lead, while France's Ligue 1 ended its season early in April – the post-coronavirus financial headache is only just beginning.

Taking the latest 2018/19 matchday revenue figures from Deloitte's Annual Review of Football Finance 2020 published on Thursday, CGTN Europe calculated that clubs in Europe's top five leagues could lose up to $718 million on matchdays alone this season as social-distancing measures to limit the virus's spread force games behind closed doors. 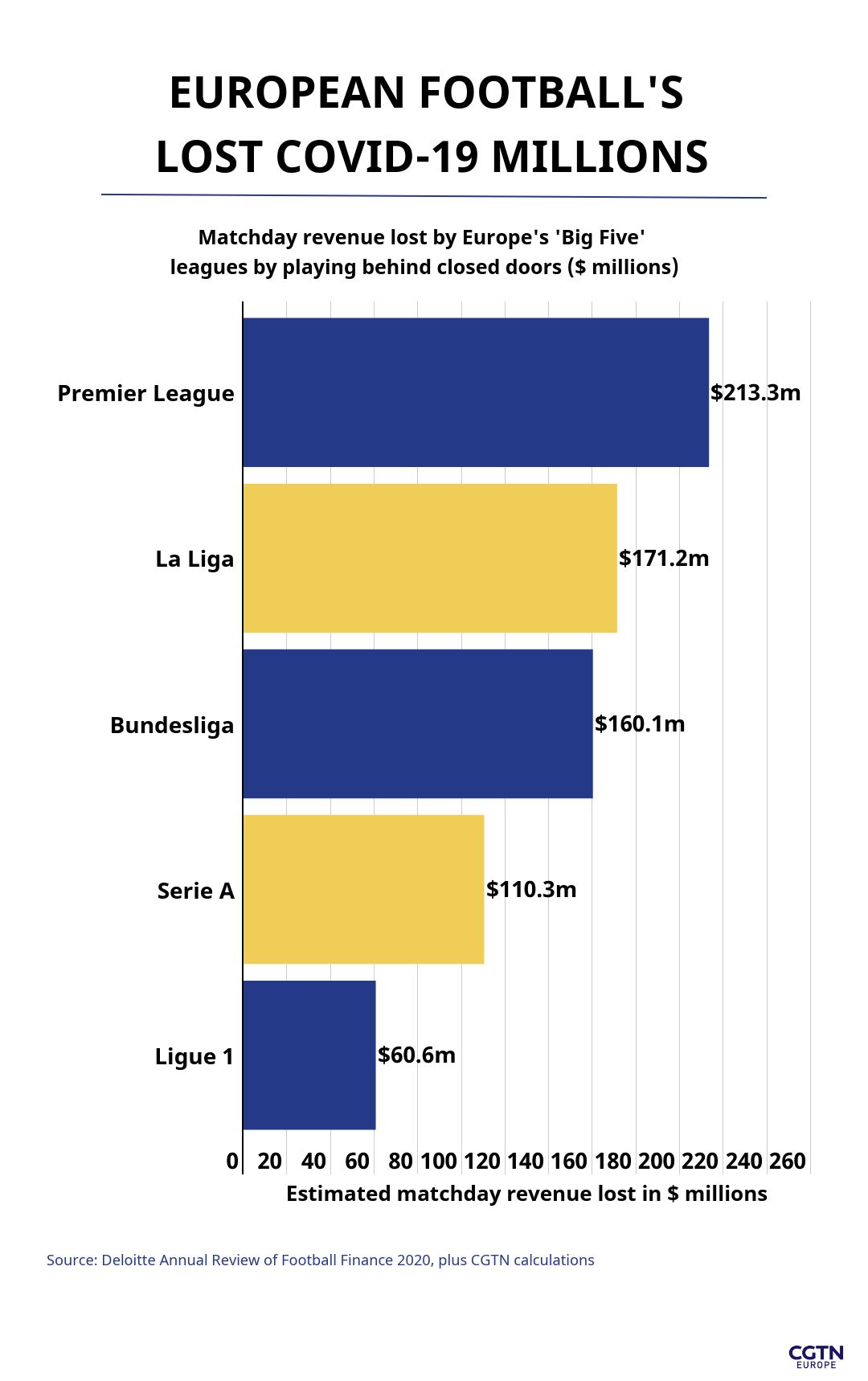 "Much remains uncertain, particularly around the timing and scale of the return of fans to stadiums and the impact on commercial and broadcast partners' wider businesses," said Dan Jones, head of the Sports Business Group at Deloitte.

"While all will be impacted, those clubs from smaller countries, typically with a greater dependence on matchday revenues, risk being hit the hardest."

Based on statistics for the 2018/19 campaign, the estimated figures show next season's matchday revenues could also be cut by as much as half, with fans not expected to return to stadiums until 2021 at the earliest in England, Spain, Germany, Italy and France.

The tightening of footballing belts across Europe may only be getting started.

The 20 teams in England's top flight are expected to suffer Europe's biggest drop, losing an estimated $213.3 million from the 92 games remaining of the 2019/20 season, which is due to restart on 17 June. According to Deloitte, Premier League clubs generated $881.9 million from matchday revenues in 2018/19, more than any other major European league.

In Spain, a continent-high 16 percent of the revenue generated by its 20 top-flight clubs comes from matchdays, a total of $592.1 million. With 110 games to be played behind closed doors until the delayed season is due to finish on 19 July, teams stand to lose $171.2 million.

On 16 May, Germany was the first of the Big Five to return to competitive action, successfully implementing protocols to ensure player safety. But its elite 18 clubs will still lose $160.1 million from expected matchday revenues for the 83 games to be played behind closed doors in completing the 2019/20 campaign by 27 June. Matchdays generated $591.3 million last term, that is 16 percent of their total receipts.

Italy's approach to matches without fans was more staggered. Six games took place behind closed doors before lockdown in one of the European countries hardest hit by the coronavirus, with 124 to follow when the league resumes on 20 June. The bank accounts of Serie A's 20 clubs will be lighter by $110.3 million (from an expected $323.1 million) come season end as a result.

France's top flight ended the season prematurely on 28 April, with league leaders Paris Saint-Germain declared champions on a points-per-game basis. With no football at all to be played until September at the earliest, by government decree, clubs will lose $60.6 million of an expected $228.5 million in gate receipts and other expected matchday revenue.