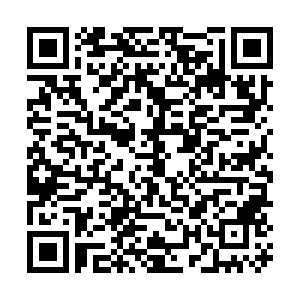 •  Researchers in the UK have begun trials on a T-cell immunotherapy treatment that should help the recovery of patients severely ill with COVID-19 by boosting the creation of immune T-cells, found in very low levels in those patients.

• Italy's death toll in March and April could be 19,000 higher than recorded, according to the Istituto Nazionale della Previdenza Sociale (INPS). The social security and welfare institute believes that deaths in the country in those months might have been linked to patients not being able to get healthcare because of hospitals being overwhelmed with coronavirus.

• The UK government is expected to announce that travelers who fail to self-isolate for 14 days after arriving into the country – by plane, ferry, or train - will face a fine of £1,000 ($1,200).

• Air France says it is shutting down all flights that use its Airbus A380 aircraft due to the crisis that hit the aviation industry.

•  For the second consecutive day, eight regions in Italy recorded zero new COVID-19 cases, but in the Lombardy region – the epicenter of outbreak in the country – the number of confirmed cases is growing. Travelling between regions remains banned until 3 June.

• At least 50 French healthcare workers were fined and three people arrested for breaking social distancing measures during protests for better funding of a hospital in Paris.

• Germany has shut down a slaughterhouse in Dissen, northern Germany, after four COVID-19 outbreaks were previously found in other abattoirs across the country, pushing the government to ban the use of temporary workers in the industry.

• Serbia has announced that the country's Exit music festival will be postponed from July to August.

• In Denmark, one of the first countries in Europe to reopen cinemas and theatres, cases remain low despite fears that easing lockdown might spark a second spike.

• Ramzan Kadyrov, leader of the southern Russian republic of Chechnya since 2007, has reportedly been taken to hospital in Moscow with coronavirus symptoms.

• Oxfam International has announced it is closing operations in 18 countries, after the pandemic heavily hit its funding and the agency laid off almost a third of its 5,000 staff and 700 from partner groups.

• Brazil's death toll has passed 20,000, confirming the country as one of the worst affected by the coronavirus.

• As the virus spreads in South America, countries like Mexico, Chile, and Peru are struggling to contain the outbreak in their territories. 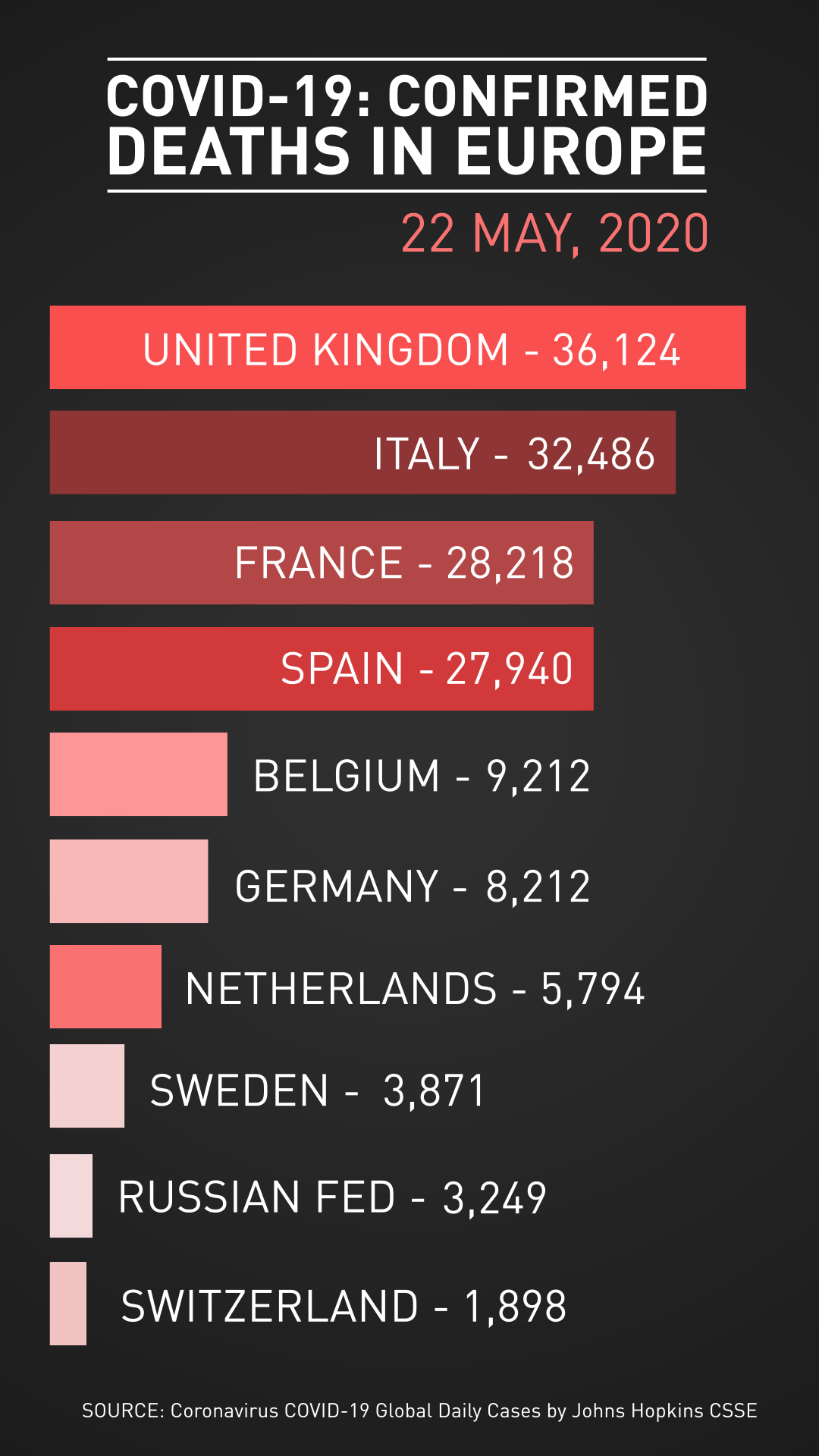 By Alex Fraser in Milan

Almost 19,000 more people than previously thought may have died due to COVID-19 in Italy according to a report published by the country's national social security institute. The analysis found that there had been almost 47,000 excess deaths during March and April compared to the previous five years of records.

Italy is expected to reopen for travel between regions on 3 June, but whether Italians can travel to one region or another depends on the rate of infection being comparable between areas.

The region of Lombardy is the economic heart of Italy but it has been hit the hardest by the pandemic. There are worries that if the rate of infection doesn't drop by 3 June, travel will still be restricted in and out of the region. A decision is expected to be made by the government on 29 May about which regions are safe to travel between. 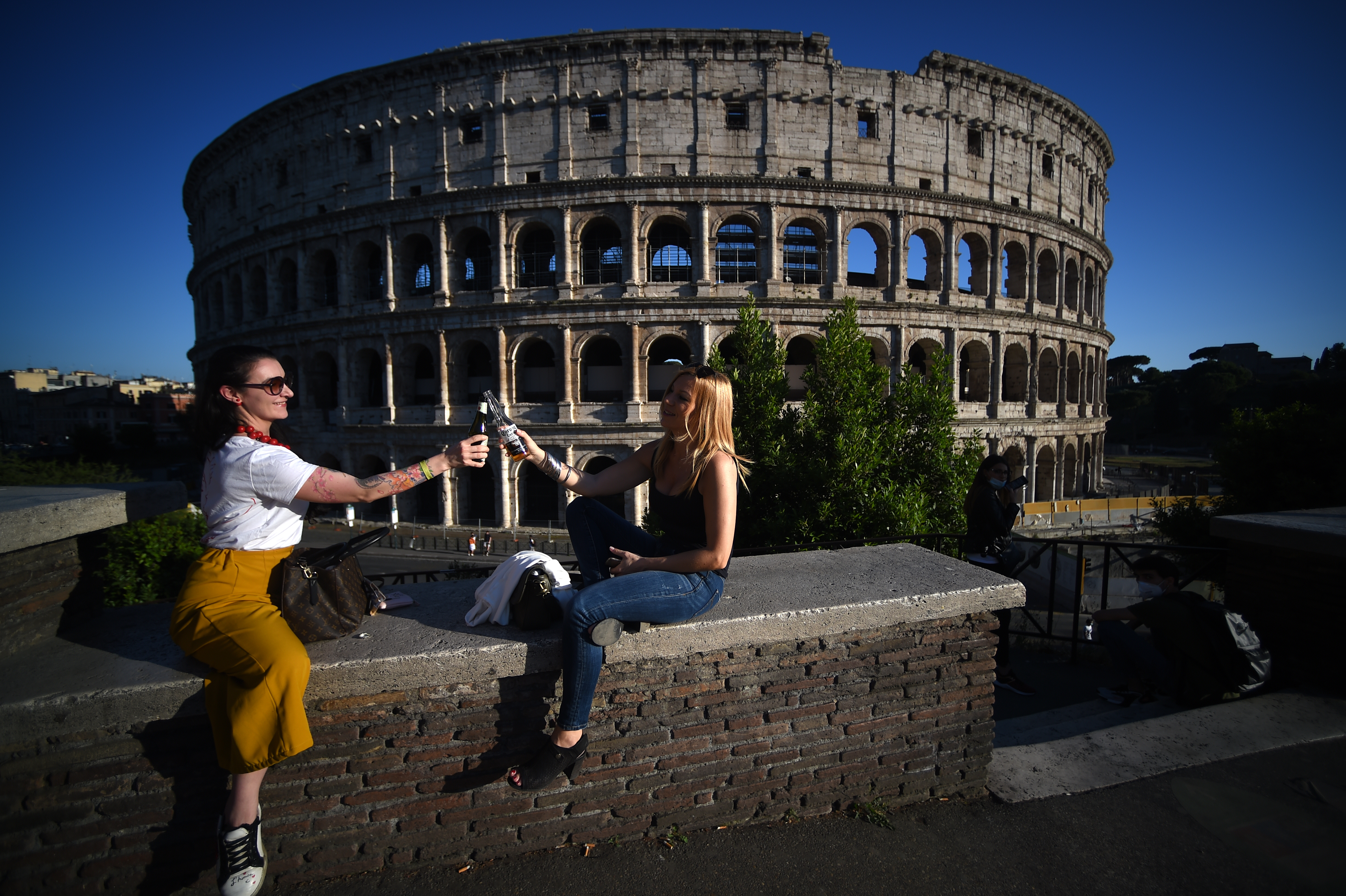 People sharing an aperitif drink by the Colosseum in Rome, while Italy eases its lockdown after over two months. Credits: Filippo MONTEFORTE // AFP

People sharing an aperitif drink by the Colosseum in Rome, while Italy eases its lockdown after over two months. Credits: Filippo MONTEFORTE // AFP

By Nicole Johnston in London

On Friday the UK government is expected to detail its first mandatory quarantine order. The Home Secretary, Priti Patel, will speak at the daily press briefing, and it's expected she will announce that people arriving via sea, air or rail into the UK must self isolate for 14 days. This could start from 1 June. The Republic of Ireland, the Channel Islands and Isle of Man will be exempt.

Airlines and Heathrow International Airport have said the quarantine plan has been introduced too late and will decimate the already beleaguered industry. Meanwhile the government borrowed more than $62 billion dollars in April, the highest monthly figure on record.

Also in April British retail sales fell by 18.1 percent and clothing by 50.2 percent.

The government has also extended its mortgage holiday option for people struggling to meet their payments by another 3 months.

Hungary has allowed entry to travelers from six countries provided they are moving for business reasons. According to a government decree, citizens of Czechia, Poland, Germany, Austria, Slovakia or South Korea can enter the country on business and aren't required to complete the mandatory 14-day quarantine period.

Furthermore, entry into the country from Austria will now be permitted if people present a negative test result for COVID-19, provided this has been carried out in the previous four days. The government is in talks with neighboring countries on the possibility of opening additional border crossings.

Budapest's bath complexes will be permitted to reopen from 30 May, provided they meet official public health regulations. All of Budapest's famous baths and spa complexes have been closed since March. 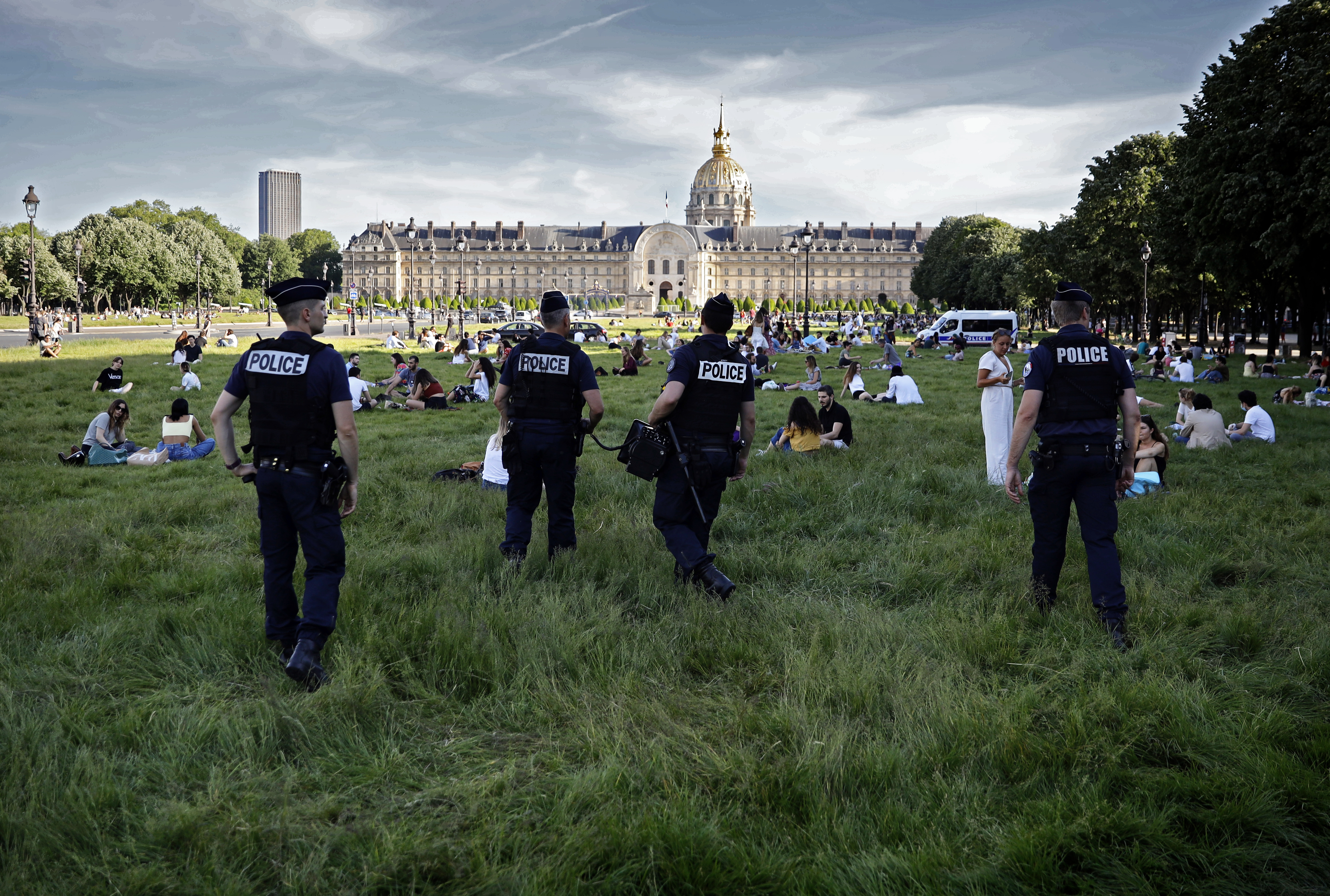 On Friday Spain's health ministry will announce if Madrid and Barcelona can enter phase 1 of the government's four stage deescalation plan.

Spain's two biggest cities have been the hardest hit by COVID-19 deaths and infections. Unlike the rest of Spain they've remained at phase 0 for two weeks. If, as expected, the government allows Madrid to ease its lockdown restrictions, the capital will reopen its famous city parks from Monday.

Earlier this week Madrid's regional government filed an appeal with the Supreme Court to find out why the health ministry had twice denied their request to move onto phase 1.

German Health Minister Jens Spahn has announced that the country will begin precautionary COVID-19 testing in hospitals and nursing homes. He said that Germany now has the testing capacity for this, with the ability to carry out close to a million tests per week if needed.

He also announced a plan to build up a 'national reserve' of personal protective equipment to avoid repeating the situation of February and March where medical staff didn't have access to enough gear - such as masks and gloves.

German tax revenue declined by 25 percent in April compared to a year earlier, according to the finance ministry's monthly report.