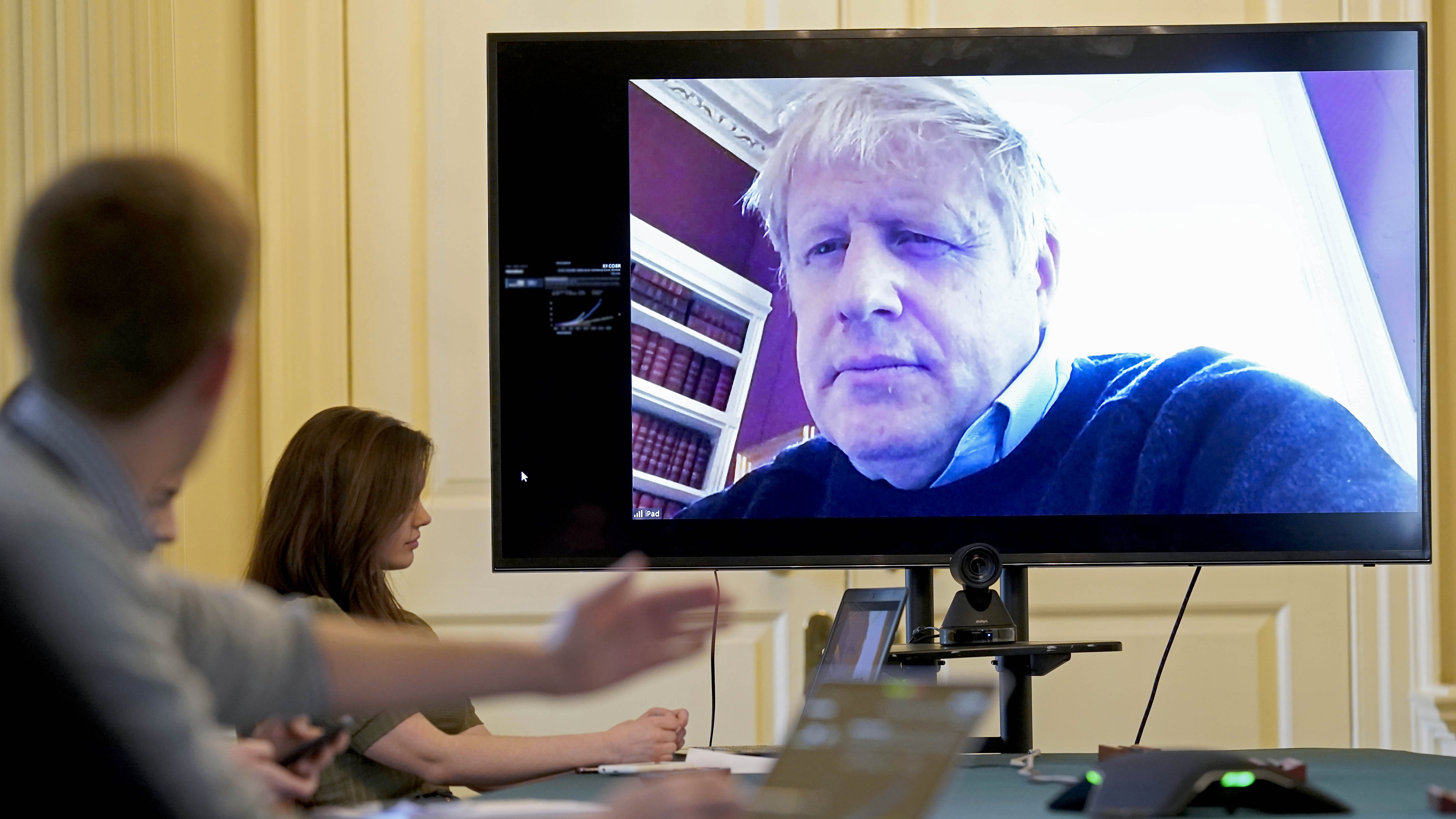 British Prime Minister Boris Johnson continues to chair daily briefings from his private residence while self-isolating before he is hospitalized on April 6, 2020. /AP

British Prime Minister Boris Johnson continues to chair daily briefings from his private residence while self-isolating before he is hospitalized on April 6, 2020. /AP

UK Prime Minister Boris Johnson has been allowed to leave the Intensive Care Unit (ICU) where he has spent the last three nights but will remain at St Thomas' hospital in London after contracting COVID-19.

In a statement released by 10 Downing Street the UK government confirmed, "The Prime Minister has been moved this evening from intensive care back to the ward, where he will receive close monitoring during the early phase of his recovery."

UK foreign secretary Dominic Raab has been chairing daily government meetings while the prime minister has been in hospital.

And in a news conference on Thursday afternoon Raab said that "he's (Johnson) still in intensive care but he continues to make positive steps forward and he's in good spirits,"

Raab continues to deputize for the prime minister as the UK remains in lockdown with schools, bars and restaurants closed in the strictest peacetime measures implemented in the country's history.

During a televised interview Raab went on to say "I think it's important, particularly while he's (Johnson) in intensive care, to let him focus on the recovery. We in the government have got this covered."

A Downing Street spokesperson confirmed that Johnson had been given oxygen but was not on a ventilator during his time in intensive care, where only the most severely ill patients are treated.

Johnson tested positive for COVID-19 on 27 March and spent 11 days self-isolating at his private residence above 11 Downing Street before he was taken to St Thomas' hospital with a high temperature and was admitted to the intensive care unit. 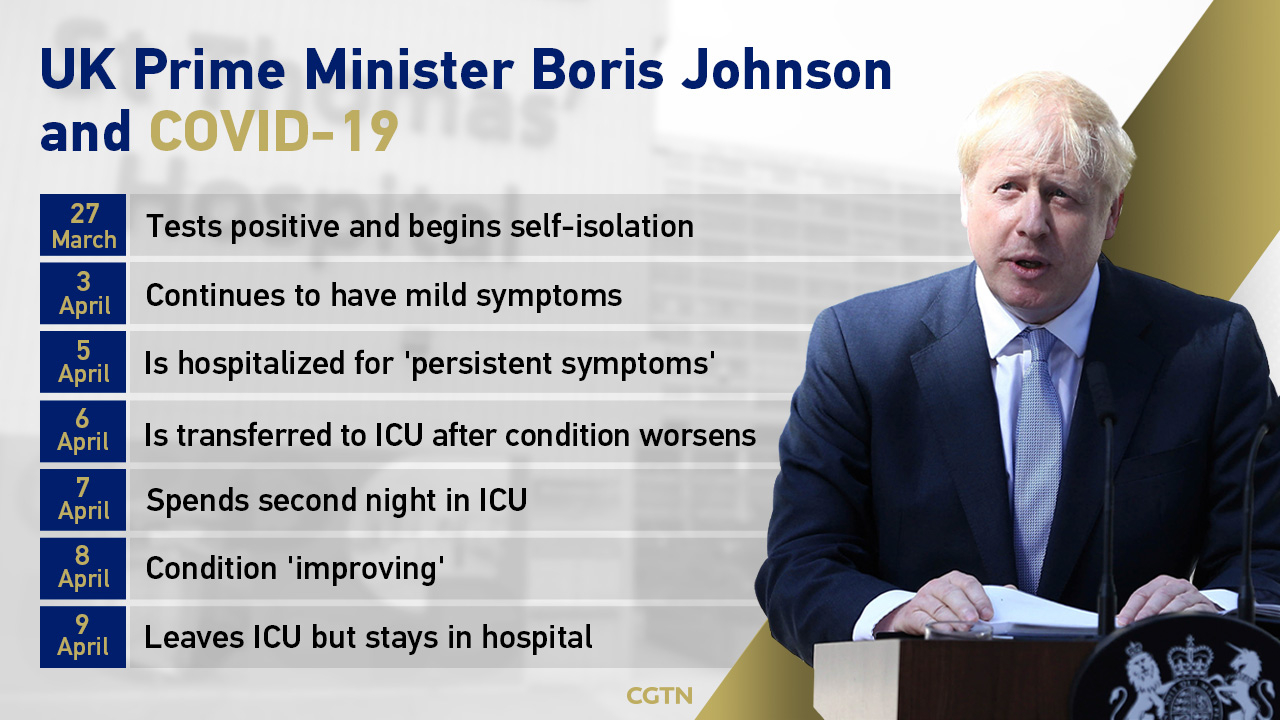 Raab was joined at the news conference by the England's chief medical officer, Chris Witty, and Patrick Vallance, chief scientific advisor, who confirmed that 7,978 people have now died from the virus, a rise of 881 on the day but a smaller increase than the 938 seen in Wednesday's data.

The UK government has been criticized for not testing enough people sooner, as they continue to work with scientists and businesses to source more testing kits. The number of patients that are now in critical care, according to the latest statistics, has risen by 43 percent in the last seven days with a 5 percent rise in the last 24 hours.

With Johnson absent and the death toll still mounting, the British government is wrestling with two major issues: How to finance a vast increase in state spending to support the shuttered economy, and when to start easing lockdown measures.

With the economy facing potentially the worst hit since World War II, the government said it had expanded its overdraft facility with the Bank of England (BoE).

The central bank has agreed temporarily to finance government borrowing in response to COVID-19 if funds cannot immediately be raised from debt markets, reviving a measure last widely used during the 2008 financial crisis.

The BoE said it was a short-term measure and both it and government said any borrowing from the Ways and Means facility – effectively the government's overdraft with the Bank – would be repaid by the end of the year.

The government has made pledges costing tens of billions of pounds to support businesses and workers hit by the virus. On Thursday, the government said an additional 1.2 million claims for welfare payments had been filed since March 16. 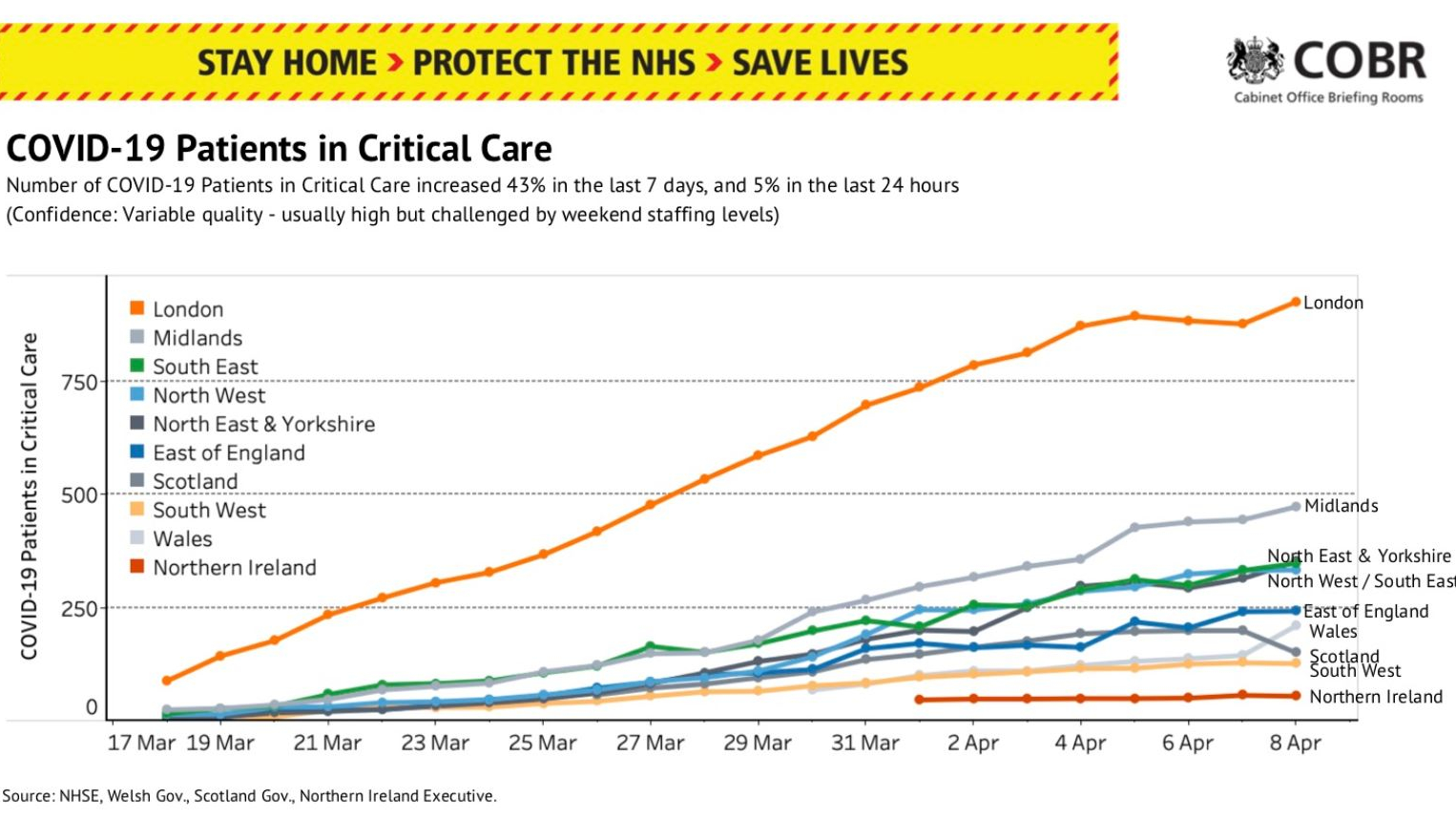 The UK released this graph highlighting the highest number of patients needing critical care are in London.

The UK released this graph highlighting the highest number of patients needing critical care are in London.

Peak of the outbreak not yet reached

Raab said the peak of the virus outbreak had yet to be reached and that the government would not be able to say more about the duration of the lockdown until late next week, once experts have had chance to analyze data on how well it is working. It was introduced last month.

"The measures will have to stay in place until we've got the evidence that clearly shows we've moved beyond the peak," he said.

While Johnson's condition was improving, the likely length of his recovery remained unknown, with some political commentators saying there was a power vacuum in his absence.

Raab said on Thursday he had the power to make "necessary decisions" in the prime minister's absence and that government will continue to follow the strategy set out by Johnson. He said cabinet could take decisions collectively.

The United Kingdom is entering what scientists say is the deadliest phase of the outbreak, with deaths expected to continue to rise over the Easter weekend.

But in a sign the shutdown measures were working, health officials have said the number of coronavirus infections and hospital admissions had begun to show signs of flattening.

Police said they would be taking tougher action to do just that before the four-day Easter holiday weekend because many people were continuing to ignore the ban on social gatherings.