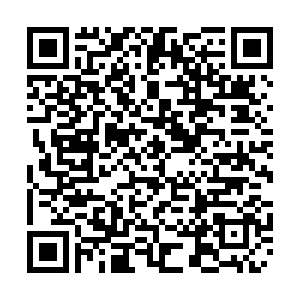 "HM Treasury and the Bank of England have agreed to extend temporarily the use of the ... long-established Ways and Means facility."

That's from a joint statement from the UK government and its central bank today, as it revealed how it would pay for some of the radical proposals intended to secure the UK economy through the COVID-19 pandemic.

Essentially, this means the finance minister, Rishi Sunak, has asked for the government overdraft to be extended, and Bank of England governor Andrew Bailey has agreed.

I was hoping to open today's briefing with words from Eurogroup chief Mario Centeno, but at the time of writing the eurozone finance ministers have not finished their meeting. I shouldn't be surprised, their get together on Tuesday lasted a marathon 16 hours – and no agreement was made.

Staying in Europe for a while, ECB head Christine Lagarde has responded to the call yesterday for debt to be forgiven amid what many are saying is going to be the worst economic downturn in living memory.

She called the idea "unthinkable."

In today's graph we take a look at the scale of global debt, by picking several nations with high, medium and low levels of debt. The top nation? It might not be the one you expect.

Another method of solving the economic malaise brought on by the virus (though admittedly on a much smaller scale) is seen in China, where retailers have cut prices of the new iPhone series 11, hoping to tempt customers coming out of lockdown.

The UK government has extended its "Ways and Means" facility with the Bank of England, in effect an overdraft, to pay for its COVID-19 financial measures, such as paying the wages of furloughed workers. It was previously limited at $455 million but has been increased by an undisclosed amount.

European Central Bank chief Christine Lagarde has said to wipe out the debt of developing nations hit by COVID-19 would be "unthinkable," after calls from charities to relieve the pressure of the owed sums.

The French competition regulator has ruled that Google must pay media organizations for displaying their content. The judgment comes after months of the web giant refusing to comply with Europe's new digital copyright law.

Several online and brick-and-mortar retailers in China have unveiled significant discounts on iPhones, as the country moves to recover from the COVID-19 outbreak. Apple is understood to have given the green light for the price cut.

Jobless figures in the U.S. have continued to rise, with 6.6 million claims in the past week, according to the Department of Labor. At least 16 million people have filed for unemployment benefits in the past three weeks.

Oxfam said coronavirus could throw as many as half a billion people into poverty, globally. A report released today said the economic crisis sparked by the pandemic means "global poverty could increase for the first time since 1990."

Senior executives at UK banks such as HSBC, RBS and Lloyds have all agreed to give up their 2020 bonus payments. The rare step comes after a plea from the Bank of England to limit bonuses amid the pandemic downturn.

As much of the U.S. is put under lockdown, shoppers have turned to comfort foods rather than healthy options, perhaps unsurprisingly. Popcorn sales are up nearly 50 percent, with pretzels only slightly behind and potato chips (or crisps, depending where you are) showing a 30 percent rise, according to Nielsen data.

How is COVID-19 amplifying poverty in the UK? "While there are no figures out yet, I think all the evidence is that the downturn is much steeper than it was in 2008," Stephen Brien, a leading expert on poverty in the UK told CGTN Europe. 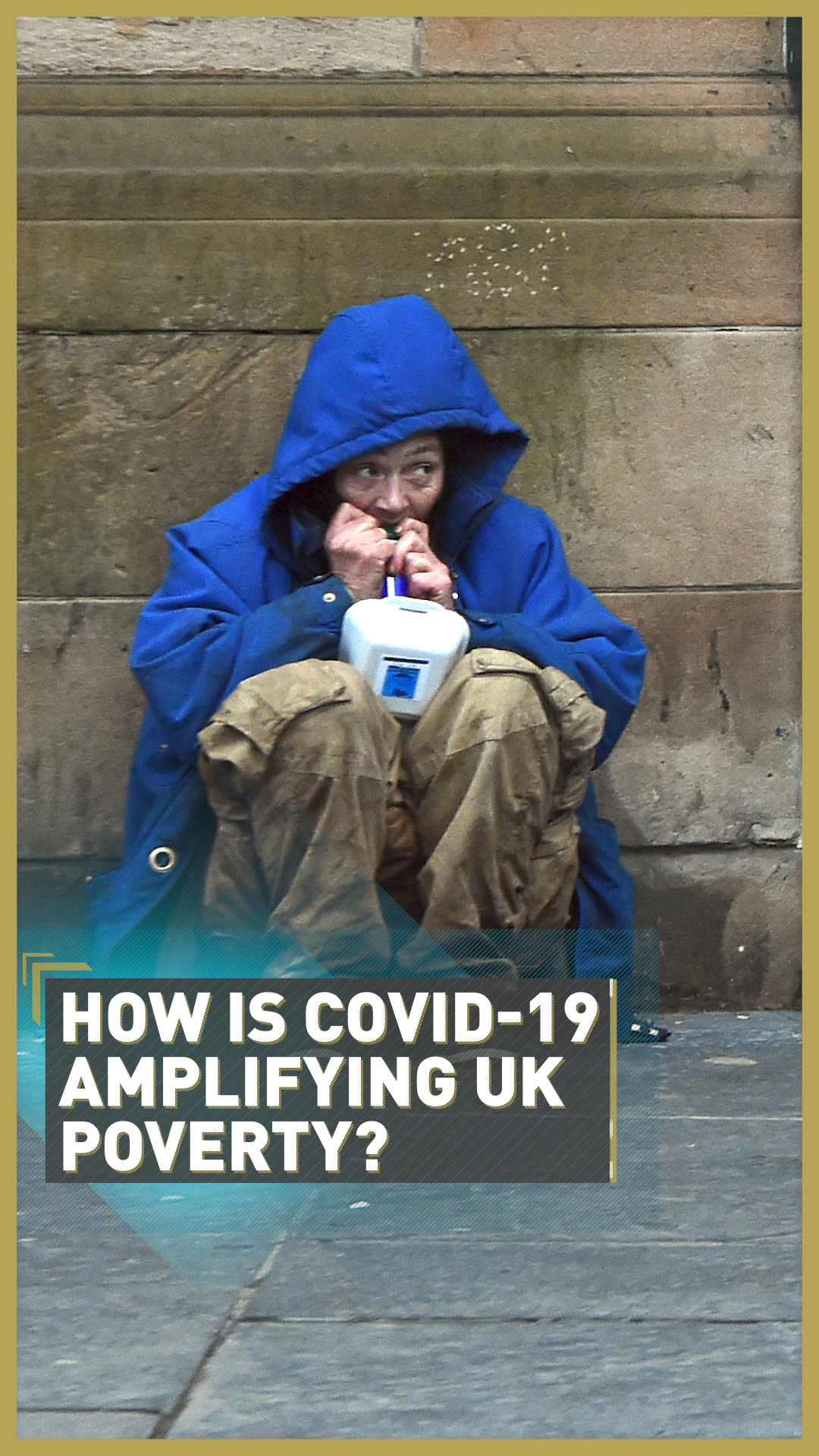 Well, the [2008] financial crash happened at a time when the economies were very strong, so it was a terrific shock and in many ways different from what's happening now, which is much more after the economies were pretty weak. It is much more like after the financial crisis, which was like the thirties really in terms of the Great Recession; interest rates down to zero. That's a big difference from what happened at the time of the financial crisis and has all sorts of implications really, because it means that when we come out with a crash, governments will have been able to issue debt at very, very low interest rates. In fact, in some cases negative ones. And so they won't have much trouble actually paying it off. I mean, that's in some ways a big plus for them in this situation and makes the whole judgment of the crisis quite, quite different from what it would have been, you know, in the case of the financial crisis.

But there is a cautionary element to it, which is that because money has been printed on such a huge scale. It will be really important when the crisis ends to make sure it's soaked up pretty rapidly, otherwise we might get a very nasty inflation.

Governments around the world have had to pump money into the economy to keep it going. They've had to embrace what you might term as left-wing policies. Basic minimum wages, the consideration of universal healthcare. I wonder what the political landscape looks like after coronavirus: will the world inevitably tilt left?

Well, I don't think so, because we've learnt the hard way that you really do need a market economy for things to work properly. I doubt very much whether anyone is ready to roll it back to big-stage ownership and state direction.

However, having said that, people will realize government has got an important role and just like they learnt in wartime; that government could do some things better than the private sector. So I think after this crisis, the government will be expected to be much more active in various ways in the economy, and that that's not a bad thing because a lot of the problems we face need a more active government.

I mean, think about social care. Really, it's very difficult to think for any organization other than the government to deliver social care in an efficient way, that sort of joined-up way between local and central government.

And this crisis will certainly give governments more confidence. They can do that sort of thing and it won't be all bad, in that respect. And I think that you'll still get the emphasis on the private sector, but government [will be] more confident about doing the things it's got to do, like infrastructure and social care.

Are you expecting after coronavirus a recession or a depression? And how long is it going to take to recover from this?

No, I'm not, because basically it's government that's causing the loss of GDP. I mean, government is closing the economy down by fiat, so it's going to be very different if government actually stops the lockdown.

And there's more and more signs that governments are doing that – obviously led by China, which has shown how you can stop a lockdown and introduce rigorous testing so new populations don't get infected. They're going to have to take the lead from that sort of policy, which is also being pursued in South Korea. And they're going to have to lift the lockdown.

And as they lift it, of course, those sectors will come straight back to life because they'll be resuscitated by the lack of a "death ray" in the form of the government itself. You know that the government will stop killing them. So it's a very different situation from a normal recession, which is brought about by lack of confidence and collapse of demand from the private sector itself. This is not going on here.

Many of us around the world have had to work from home. So many of us have had to stop commuting. I wonder how much the world of work is going to permanently change, how much of a disruption, a permanent disruption and change does coronavirus bring?

Well, that's a very interesting point because we have all done a lot of this telecommuting as a result of the virus. But I think we've also discovered that it isn't all great because you really need to see your colleagues and you need to see your students and your clients, you know, for the usual business procedures to be possible.

So I think that, yes, telecommuting was already on a rise, but we got better at it. So I expect, yes, there will be more of it. But having said all that, you still have to do business in traditional ways. And there is really pretty much no way around it. You know, people need to get together to discuss things and students need to gather in a lecture hall and so on and so forth. So I think we'll get back to the way we did things before with a sigh of relief, probably in many cases.

This graph takes a look at the scale of national debt, by showing it as a percentage of GDP. They are not the top 10, but a selection to show how debt varies and hits some extremes at both ends. 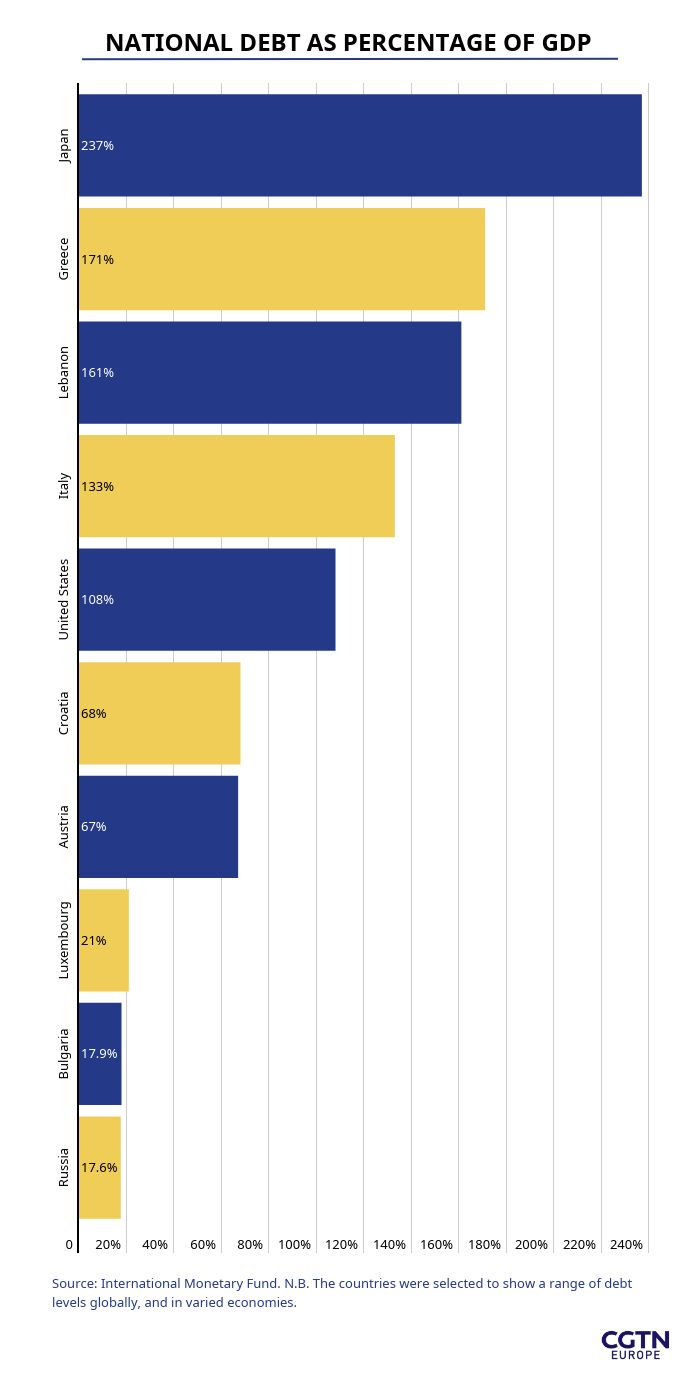