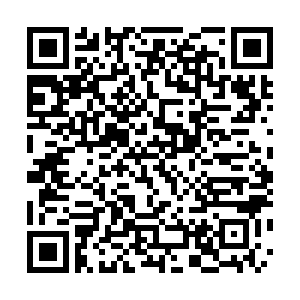 "Delighted to be appointed, lots to get on with, thanks very much."

It was short and sweet, but Rishi Sunak didn't have long to prepare for his first comments to the media as UK finance minister.

He was appointed by Prime Minister Boris Johnson after the shock resignation of Sajid Javid – reportedly after Javid was told to jettison his team of advisers, and refused to do so.

Guto Harri, who was Johnson's aide during his tenure as mayor of London, told CGTN the move was "very brutal… [but] the truth is, the prime minister is probably quite pleased."

Elsewhere, it was a big day for the aerospace industry as Airbus released its 2019 results – and moved above rival Boeing to top the plane sales tables. This is despite a huge fine from three jurisdictions over bribery allegations, which amounted to $4 billion. The 737 MAX disaster for Boeing is also an important reason behind the change.

You can see the fierce competition between the firms in our chart, at the bottom of today's email, charting their sales figures since 1989.

Another key results announcement came from Nissan, which is still reeling from the chaotic departure of former chairman Carlos Ghosn. It reported fourth-quarter operating profits crashed by 80 percent.

And Chinese giant online retailer Alibaba recorded a 38 percent hike in revenues, largely thanks to a hugely profitable "Singles' Day."

In our video today we look at how the U.S. workforce is changing and why women now make up the majority of it.

As ever, don't forget to subscribe and add us to your contacts – that way you'll get Global Business Daily direct to your inbox every weekday.

UK finance minister Sajid Javid and business minister Andrea Leadsom both lost their cabinet positions in a reshuffle by Prime Minister Boris Johnson. They have been replaced by Rishi Sunak and Alok Sharma, respectively.

Alibaba recorded a 38 percent growth in revenue in Q4 of 2019, with a record $38.4 billion in sales over November's Singles' Day event. The cloud computing wing of the firm also posted soaring revenues – up 62 percent to $1.5 billion.

Nissan has registered its first quarterly loss in nearly a decade, as it battles to recover from the scandal that led former chairman Carlos Ghosn to flee Japan. It has downgraded its annual profits forecast by 43 percent in response to the fourth-quarter loss.

Credit Suisse has posted a 69 percent rise in annual net profits, just days before CEO Tidjane Thiam steps down. The outgoing boss said the significant rise could be attributed to his focus on wealth management and described the appointment of Thomas Gottstein as his replacement as "great."

The European Commission has kept its expectations for GDP growth at 1.2 percent, "as more positive developments are counterbalanced by negative events elsewhere." However, the prediction of stability came as the bloc's currency, the euro, fell to its lowest price since early 2017.

Domino's, the UK's largest pizza delivery firm, has begun the sale of its European arms by offloading its Norweigian business to existing minority shareholders. It has struggled to control the costs of its operations outside the UK, with Swedish, Swiss and Icelandic operations also on the chopping block.

For only the second time in U.S. history, women outnumbered men in U.S. workforce. Karina Huber has this report from New York City. 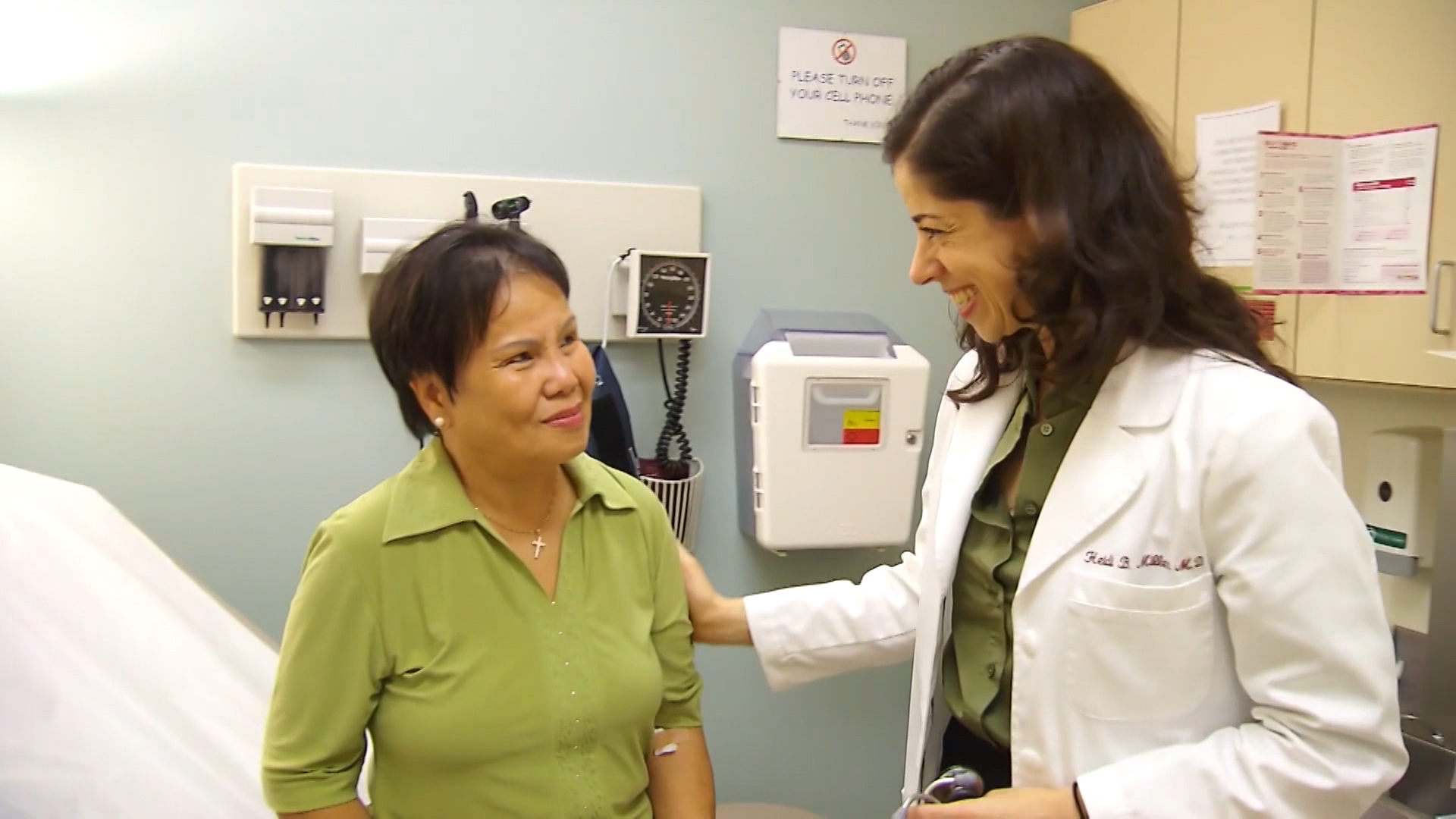 Airbus has published its results. What is your reaction to them?

Well, I'm not surprised. I mean, that Boeing got hit heavily recently because of the whole issue with the Boeing 737 MAX, so it was quite normal to see airlines move towards ordering Airbuses instead of Boeings. So that didn't surprise me at all.

Also, Airbus has had more of an innovative approach... They're developing more electric aircraft. They're getting involved in electrical vertical take-off and landing.

But for those who are looking at the numbers, it's quite confusing because, in theory, Airbus has consolidated a net loss again. Are you not surprised the company hasn't been making any money?

The Airbus A380 project really hit them badly because that is a very expensive airplane to produce. The fact that after so many years it had to cancel that project, it's always going to take them a bit of time to go into profitability.

With these large companies and with airplanes, in particular, it's a very costly business to create a new airplane. It's not a five-minute job and it does require a lot of capital. And you have to sort of make that money back.

So, on the Airbus A380, that's probably why the balance sheet isn't as positive as maybe one would hope, because the project has now been canceled.

But also, as you mentioned before, because of Boeing's troubles, Airbus has overtaken Boeing as the number one aircraft. What is next, then, for Airbus? How do you think they're going to sort of evolve, redevelop themselves?

Well, I think the Airbus 350 is doing very well. Engineers and pilots I speak to who have worked on that aircraft speak very highly of it. So they're doing very well on that. Boeing, with all this 737 Max situation... it is going to be tough for them.

I think the interesting thing is that there's always the debate: is Airbus better than Boeing? Who's going to win between the two? I think we need to look at Mr Elon Musk.

Elon Musk has already said he wants to take people from anywhere to anywhere in less than an hour on rockets instead of planes. That's something that's not much talked about, but I don't see it happening in every city in the world, but at least maybe 20 to 30 cities in the world, this could happen with a thousand people on a rocket.

That would allow people to travel very quickly and you'd get from London to Sydney in 35 minutes on a rocket. But not everybody would be able to travel by rocket, I think supersonic, and maybe hypersonic, travel is coming back.

They are also doing a lot of innovation regarding pilot training as well by using virtual reality, which will bring the cost of pilot training down. And that will obviously attract more orders because the training of the pilots is an element which is quite expensive in operating an aircraft.

They've just released the maverick aircraft. It's quite an extraordinary sight. Do you think this is going to be setting the norm now?

Well, they need to change. Planes haven't changed since the Wright brothers. So, to see a shape like that is refreshing for the industry. It's also more environmentally friendly, consumes less fuel, 20 percent less fuel. I think we're going to be moving towards more interesting shapes in aircraft. 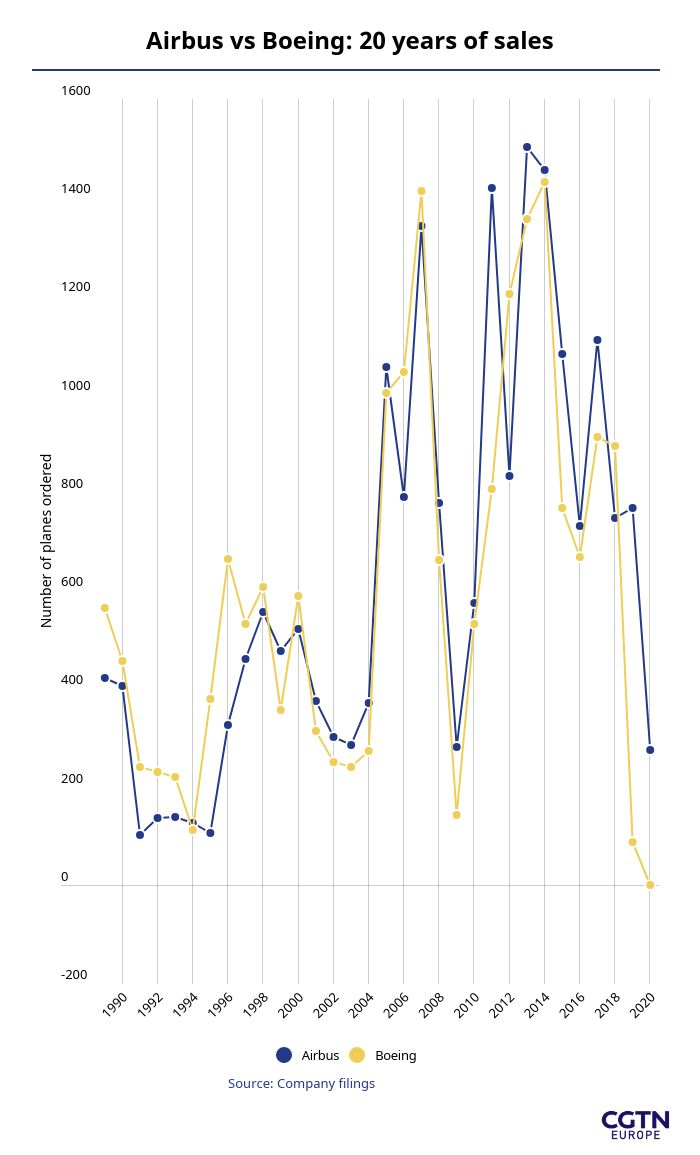 Airbus sold more planes than rival Boeing in 2019, with the 737 MAX crisis hitting the U.S. firm hard. In today's chart, we look at the two firms' battle over the last three decades. It's been neck-and-neck for a while, but Boeing's drop to zero is significant.

Airbus sold more planes than rival Boeing in 2019, with the 737 MAX crisis hitting the U.S. firm hard. In today's chart, we look at the two firms' battle over the last three decades. It's been neck-and-neck for a while, but Boeing's drop to zero is significant.