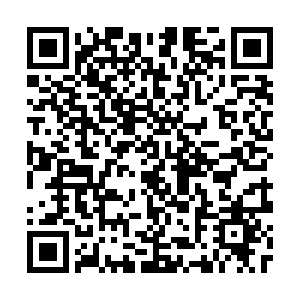 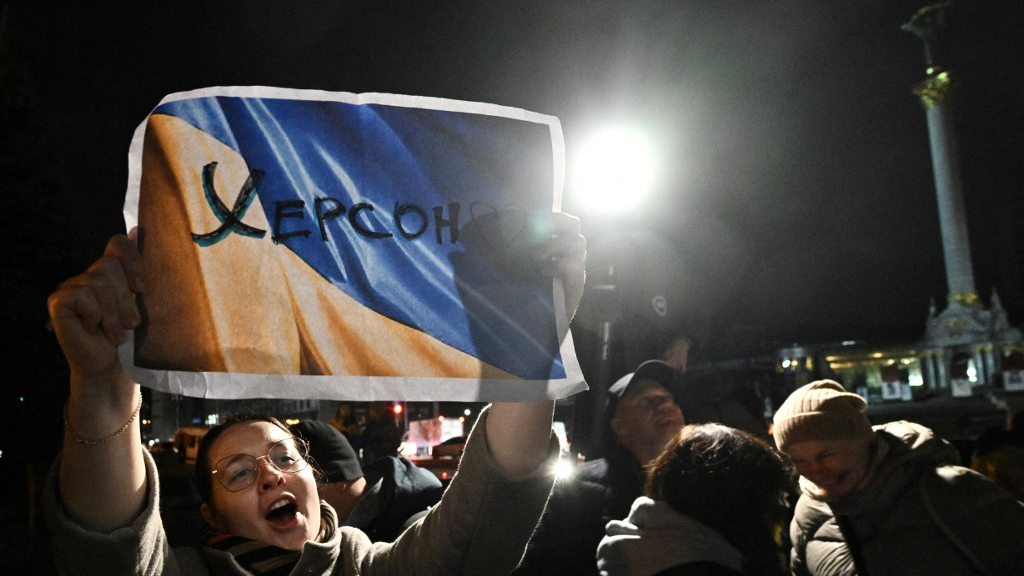 A woman holds a slogan which reads as "Kherson" as people gathered in Maidan square to celebrate the city's liberation in Kyiv. /Genya Savilov/AFP

A woman holds a slogan which reads as "Kherson" as people gathered in Maidan square to celebrate the city's liberation in Kyiv. /Genya Savilov/AFP

· President Volodymr Zelenskyy hailed "a historic day" following Kyiv's retaking of Kherson, as Ukrainian soldiers arrived in the strategic city following Moscow's withdrawal of the only regional capital it had captured since February.

· Russia's defense ministry said it had pulled more than 30,000 soldiers out of the city, retreating across the Dnipro River, without losing a soldier. However, Ukrainians described chaotic scenes, claiming Russian troops were ditching their uniforms or drowning as they tried to escape.

· The Kremlin added that Russia's withdrawal from Kherson's capital would not change its claim to the wider region.

· President Tayyip Erdogan said Turkey was committed to seeking a peace dialogue between Russia and Ukraine: "We are working on how to create a peace corridor here, like we had the grain corridor," Erdogan said, while praising Russia's resistance to pressure from the U.S. and its allies.

· Ukraine's Foreign Minister Dmytro Kuleba urged Southeast Asian countries at a summit in Cambodia to pressure Russia to stop playing "hunger games" over a Black Sea grain deal that could expire next week.

· Kyiv is building a new wall and other fortifications on its border with Belarus, after Moscow used its western ally's territory to attack northern Ukraine during the launch of its military campaign in February.

· The UN's nuclear watchdog said an investigation of a research plant in Kharkiv found the site was badly damaged, but there were no signs of a radiological release or diversion of nuclear material.

· Russian-based international ballet dancers from renowned companies like the Bolshoi and the Mariinsky, who fled the country due to the war, are reuniting for a one-off performance in California. 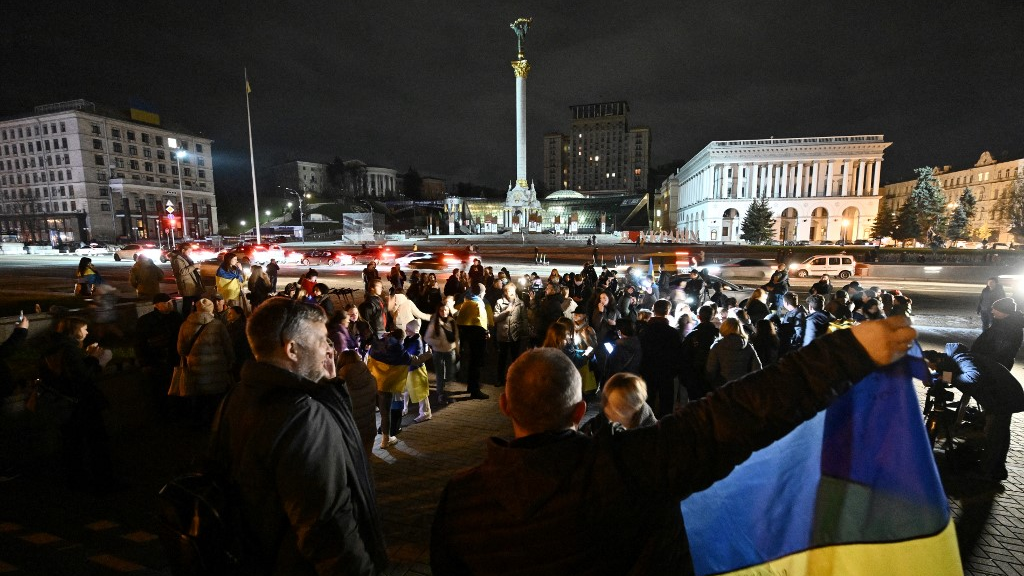 Many Kherson residents came out to welcome Ukrainian troops as they arrived in the strategic city's center on Friday after Russia abandoned the regional capital earlier this week.

"Today is a historic day. We are getting the south of the country back, we are getting Kherson back," President Zelenskyy said in an evening video address.

"As of now, our defenders are on the outskirts of the city, and we are very close to entering. But special units are already in the city," he said.

The Kremlin said it had withdrawn 30,000 troops across the Dnipro River without losing a single soldier, but local Ukrainians claimed Russian troops had been ditching their uniforms, dropping weapons and drowning while trying to flee.

The withdrawal signals the third major Russian retreat of the war and the first to involve abandoning such a large city in the face of a Ukrainian counter-offensive that has seen Kyiv retake large swathes of the east and south.

Ukraine's defense intelligence agency said Kherson was being brought back under Ukrainian control and ordered any remaining Russian troops to surrender to Kyiv's forces entering the city.

Zelenskyy said measures to make Kherson safe - in particular, removing what he called a large number of landmines - would start as soon as possible.

Dmitry Rogozin, a senior Russian official, said that the withdrawal across the Dnipro was painful but necessary, but suggested Moscow could regroup and launch another offensive.

"We must carry out this task, hoping that when we gather our strength, when new weapons arrive, when well-trained mobilized units arrive, when volunteers arrive, we will rally and take back this land," the agency cited him as saying.

Kherson province is one of four Ukrainian regions Russian President Vladimir Putin announced as being integrated into Russia in late September. It is also strategically important as the land gateway to the Crimean Peninsula.

Putin's spokesman Dmitry Peskov said the decision to retreat from Kherson was taken by the defense ministry. Asked by reporters if it was humiliating for Putin, Peskov said: "No."