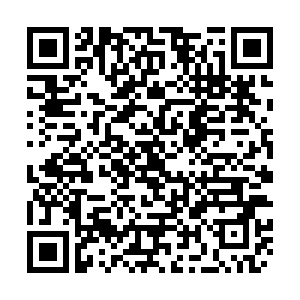 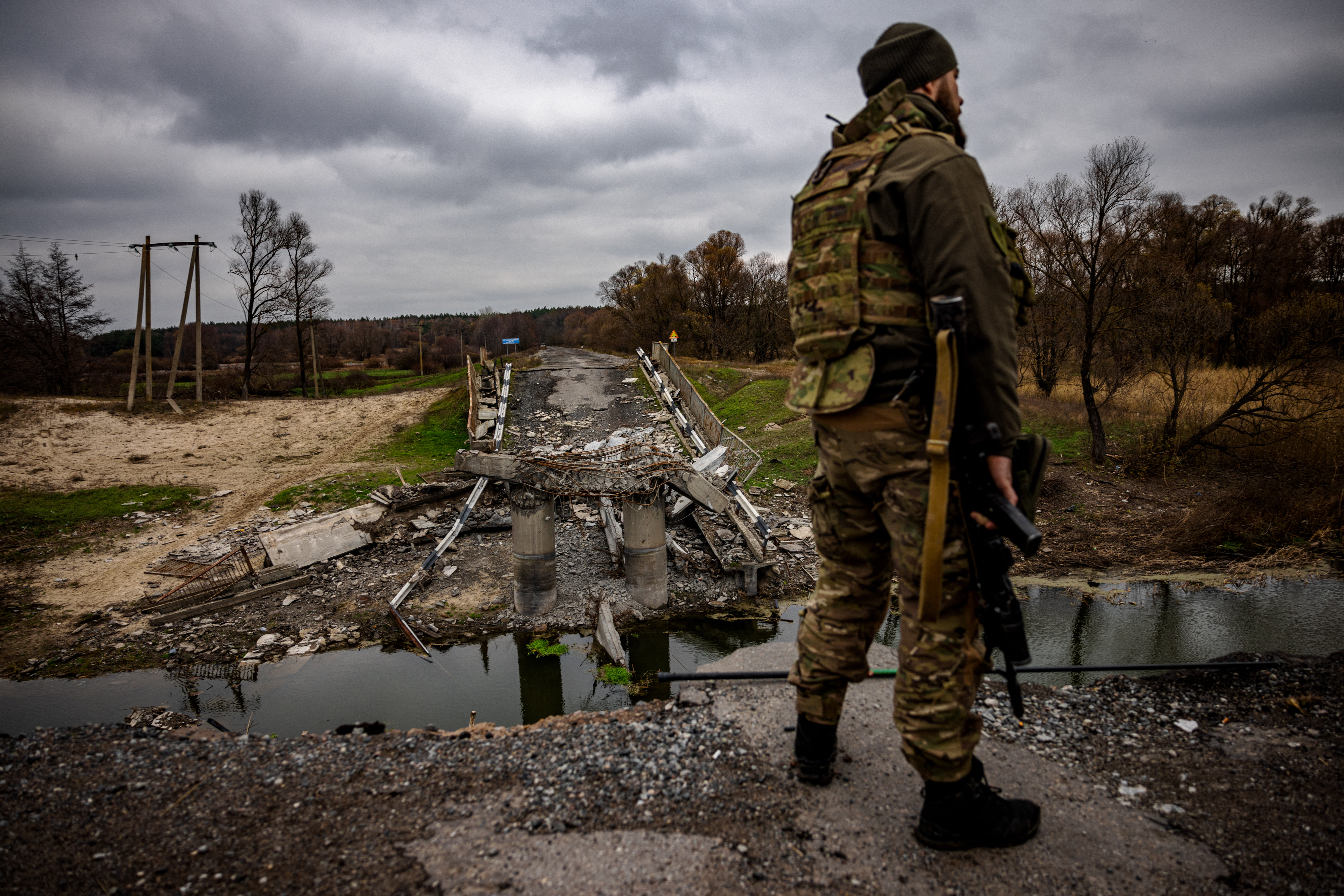 A Ukrainian soldier by a destroyed bridge near the Ukrainian border with Russia in the Kharkiv region. Dimitar Dilkoff / AFP

A Ukrainian soldier by a destroyed bridge near the Ukrainian border with Russia in the Kharkiv region. Dimitar Dilkoff / AFP

· Iran said it supplied Moscow with drones before Russian began current hostilities in Ukraine, where Russia has used them to target power stations and civilian infrastructure. Foreign Minister Hossein Amirabdollahian said a "small number" of drones had been shipped. Ukraine and international allies have criticized Iran for selling so-called "suicide drones" to Russia since 2014, when Crimea and parts of Donbas were annexed.

· Ukrainian President Volodymyr Zelenskyy dismissed talk of limited Iranian supplies to Russia, saying Ukraine had downed 11 drones on Friday alone. "If Iran continues to lie about the obvious, it means the world will make even more efforts to investigate the terrorist cooperation between the Russian and Iranian regimes and what Russia pays Iran for such cooperation," he said.

· Zelenskyy, who has repeatedly pressed allies to provide more defenses against aircraft and missiles, said he expected "good news" in coming weeks but gave no details. Kyiv, he added, would next week launch a fund-raising campaign to buy marine drones like those which attack the Russian Black Sea fleet.

· U.S. Special Envoy for Iran Robert Malley tweeted it was untrue that Iran had sent a few drones. "They transferred dozens just this summer and have military personnel in occupied Ukraine helping Russia use them," he said.

· The U.S. is privately encouraging Ukraine to signal an openness to negotiate with Russia, the Washington Post reported. The newspaper cited unnamed sources as saying the request by American officials was not aimed at pushing Ukraine to the negotiating table, but a calculated attempt to ensure Kyiv maintains the support of other nations.

· Ukraine's state energy company has announced additional power rationing in Kyiv and several other regions. Russian strikes over the past month have destroyed around a third of Ukraine's power stations and the government has urged Ukrainians to conserve electricity as much as possible.

· Ukrainian and Russian forces are still gearing up for a fierce battle in Kherson, a southern city with a population of around 288,000 people before the conflict. Russia has been pulling civilians out of the Kherson region, with President Vladimir Putin saying residents must be "removed" from danger zones.

· In the southern Ukrainian city of Melitopol, Moscow's occupying authorities said they had brought back a statue of Lenin, seven years after it was taken down following Kyiv's pro-EU revolution. Moscow-installed head of the Zaporizhzhia region, Vladimir Rogov, posted a photograph of workers in the city reinstating the tribute to the Bolshevik leader.

· External power has been restored to Ukraine's Zaporizhzhia nuclear power plant two days after it was disconnected from the power grid after Russian shelling damaged high voltage lines, the United Nations nuclear watchdog said. External power is crucial for nuclear power stations to ensure the cooling systems remain in operation to keep the reactors safe.

· Georgia is on course to become one of the world's fastest-growing economies this year following a dramatic influx of more than 100,000 Russians since Moscow's military intervention in Ukraine and Vladimir Putin's mobilization drive to drum up war recruits. 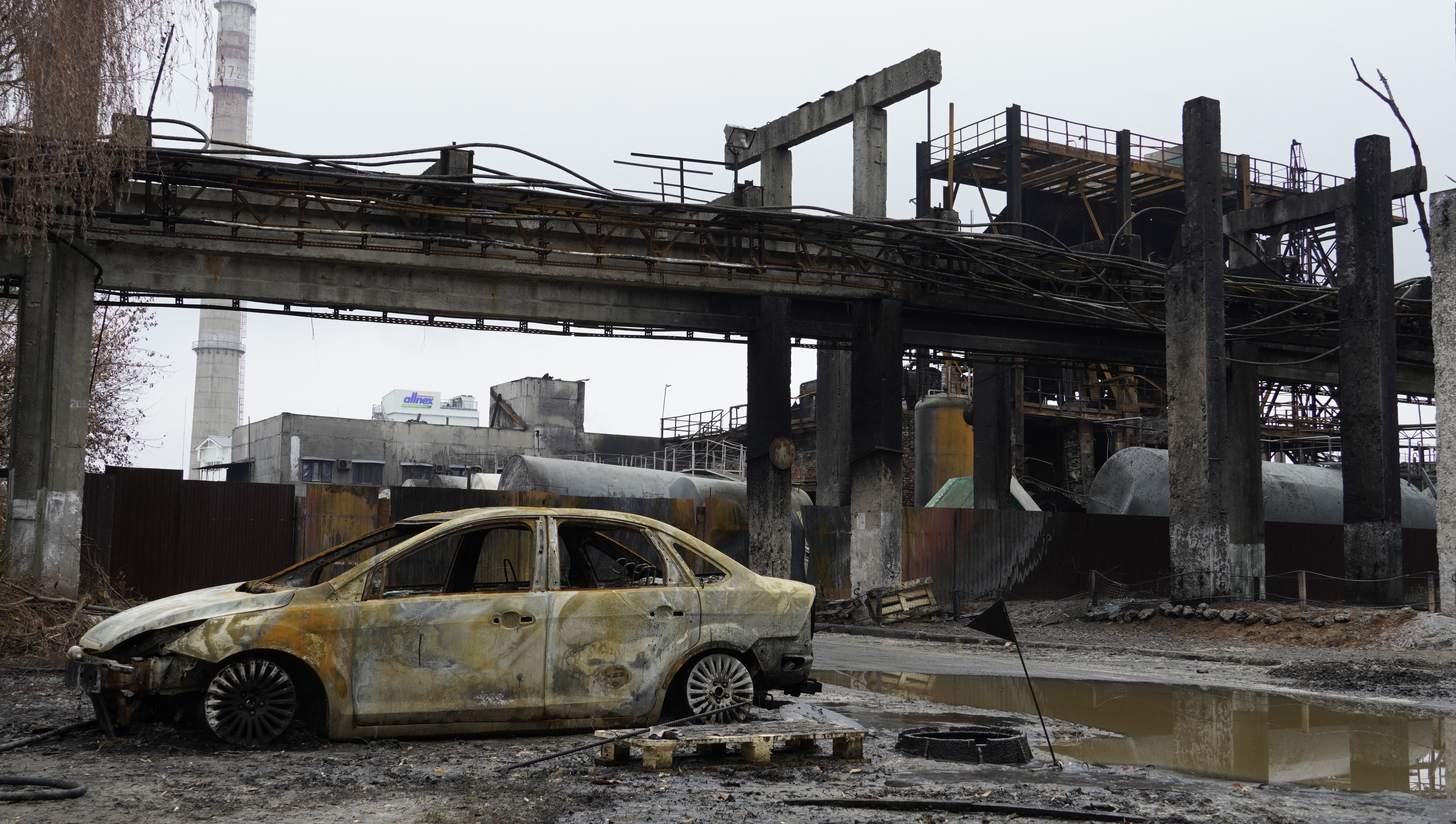 Ruins of a chemical plant after shelling from the territory of Ukraine in the town of Shebekino, near Belgorod, Russia. AFP

Ruins of a chemical plant after shelling from the territory of Ukraine in the town of Shebekino, near Belgorod, Russia. AFP

U.S. 'encouraging' Ukraine to be open to Russia talks, reports

The U.S. is privately encouraging Ukraine to signal an openness to negotiate with Russia, the Washington Post reported, as Washginton DC's State Department said Moscow was escalating the war and did not seriously wish to engage in peace talks.

The newspaper cited unnamed sources as saying the request by American officials was not aimed at pushing Ukraine to the negotiating table, but a calculated attempt to ensure Kyiv maintains the support of other nations.

U.S. and Ukrainian officials acknowledged that Ukrainian President Volodymyr Zelenskyy's ban on talks with Russian President Vladimir Putin had generated concern in parts of Europe, Africa and Latin America, where the war's effects on costs of food and fuel are felt most sharply, the Post said.

"Ukraine fatigue is a real thing for some of our partners," it quoted an unnamed U.S. official as saying.

Zelenskyy signed a decree on October 4 formally declaring the prospect of any Ukrainian talks with Putin "impossible" but leaving the door open to talks with Russia.

The White House National Security Council had no immediate comment on the accuracy of the report.

A State Department spokesperson responded: "We've said it before and will say it again, actions speak louder than words. If Russia is ready for negotiation, it should stop its bombs and missiles and withdraw its forces from Ukraine.

"The Kremlin continues to escalate this war. The Kremlin has demonstrated its unwillingness to seriously engage in negotiations since even before it launched its full-scale invasion of Ukraine."

The spokesperson also noted remarks by Zelenskyy on Friday, in which he said: "We are ready for peace, for a fair and just peace, the formula of which we have voiced many times."