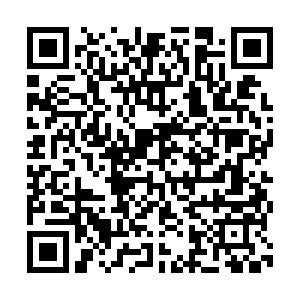 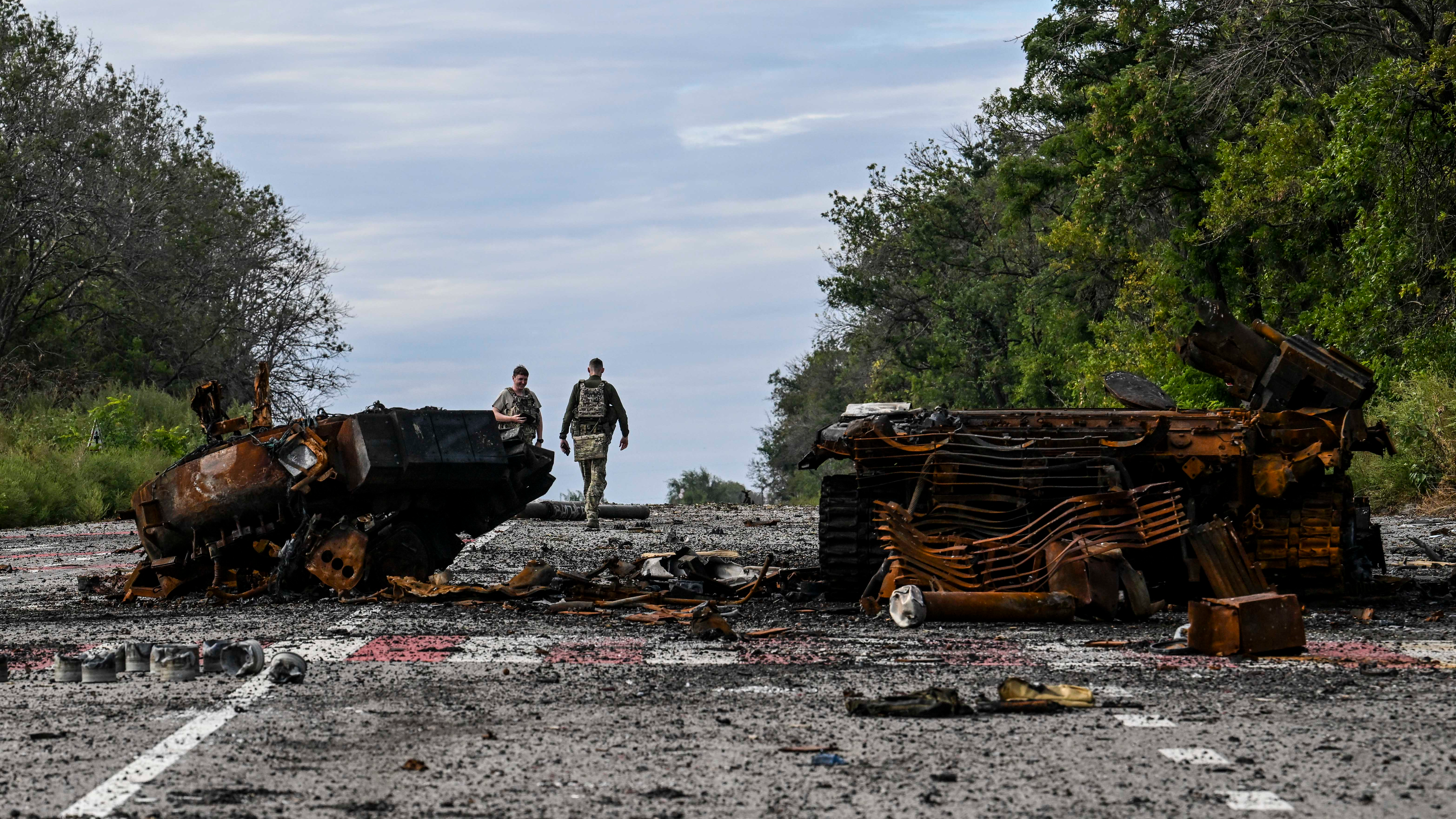 · Moscow has abandoned its main bastion of Izium in northeastern Ukraine, in a sudden collapse of one of the war's principal front lines after Ukrainian forces made a rapid advance. It is the worst defeat for the Russians since its troops were forced back from the capital Kyiv in March. READ MORE BELOW

· Britain's defense ministry said on Sunday morning Ukrainian forces had continued making gains in the Kharkiv region over the past 24 hours, with Russia likely withdrawing units but fighting continuing around the cities of Kupiansk and Izium.

· Russia's defense ministry ordered troops to leave the area around the city of Izium in Kharkiv province, saying they would be sent to reinforce operations elsewhere in neighboring Donetsk, TASS said.

· The Russian-installed chief administrator of Russian-controlled parts of Ukraine's Kharkiv region recommended all its inhabitants evacuate to Russia "to save lives," state-run TASS news agency said.

· Operations at the Russian-held Zaporizhzhia nuclear power plant in Ukraine have been fully stopped as a safety measure, Energoatom, the state agency in charge of the plant, said on Sunday.

· Ukraine will look into whether it can urgently supply neighboring Poland with 100,000 tons of thermal coal to help it through the winter, Zelenskyy said.

· Britain dismissed Russian President Vladimir Putin's assertion that only a tiny fraction of grain exported from Ukraine under an international deal was going to poor countries, saying 30 percent has gone to low and middle-income countries in Africa, the Middle East and Asia. 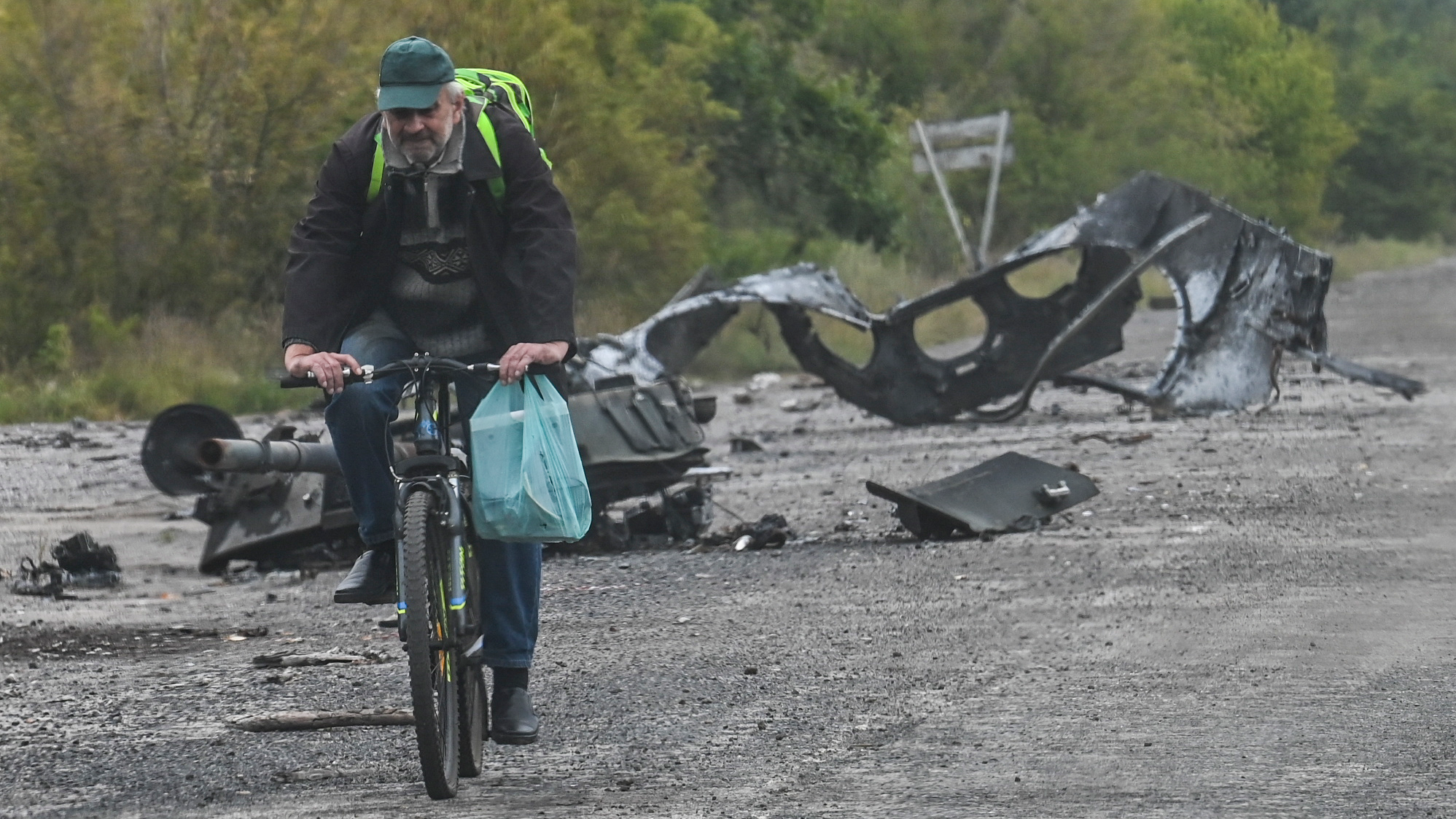 A man rides a bicycle past parts of a destroyed armored vehicle on a road in Balakliya. /Juan Barreto/AFP

A man rides a bicycle past parts of a destroyed armored vehicle on a road in Balakliya. /Juan Barreto/AFP

Moscow abandoned its main bastion in northeastern Ukraine on Saturday, in a sudden collapse of one of the war's principal front lines after Ukrainian forces made a rapid advance.

The swift fall of Izium in Kharkiv province was Moscow's worst defeat since its troops were forced back from the capital Kyiv in March. Ukraine hailed it as a turning point in the six-month-old war, with thousands of Russian soldiers leaving behind ammunition stockpiles and equipment as they fled.

Russian forces used Izium as the logistics base for one of their main campaigns – a months-long assault from the north on the adjacent Donbas region comprised of Donetsk and Luhansk.

The state-run TASS news agency quoted Russia's defense ministry as saying it had ordered troops to leave the vicinity and reinforce operations elsewhere in Donetsk.

The head of Russia's administration in Kharkiv told residents to evacuate the province and flee to Russia to "save lives," TASS reported. Witnesses described traffic jams of cars with people leaving Russian-held territory.

If the reported gains are held, it would be a serious blow for Russia, which Western intelligence services say has suffered huge casualties. It would also be a big boost for Ukraine, which is keen to show weapons-supplying Western nations that it deserves their continued support.

There is pressure on Kyiv to demonstrate progress before winter sets in, amid threats by Russian President Vladimir Putin to halt all energy shipments to Europe if Brussels goes ahead with a proposal to cap the price of Russian oil exports.

Ukraine's Foreign Minister Dmytro Kuleba said in Kyiv that Ukrainian forces had demonstrated they were capable of defeating the Russian army with the weapons given to them.

"And so I reiterate: the more weapons we receive, the faster we will win, and the faster this war will end," he said.

In his nightly video address on Saturday, President Volodymyr Zelenskyy said Ukraine's armed forces had recovered around 2,000 square kilometers of territory since its counter-offensive was launched earlier this month.

"The Russian army is claiming the title of fastest army in the world... keep running!" Andriy Yermak, Zelenskyy's chief of staff, wrote on Twitter.

Ukrainian officials stopped short of confirming they had recaptured Izium, but Yermak earlier posted a photo of troops on its outskirts and tweeted an emoji of grapes. The city's name means "raisin."

That left thousands of Russian troops abruptly cut off from supplies along a front that has seen some of the most intense battles of the war.

Igor Girkin, a former commander of pro-Russian forces in eastern Ukraine, called the Russian pullback "a major defeat" in remarks on Telegram.