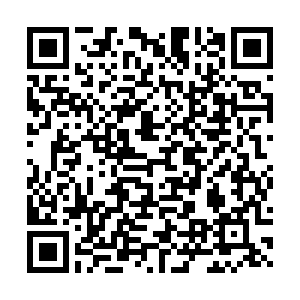 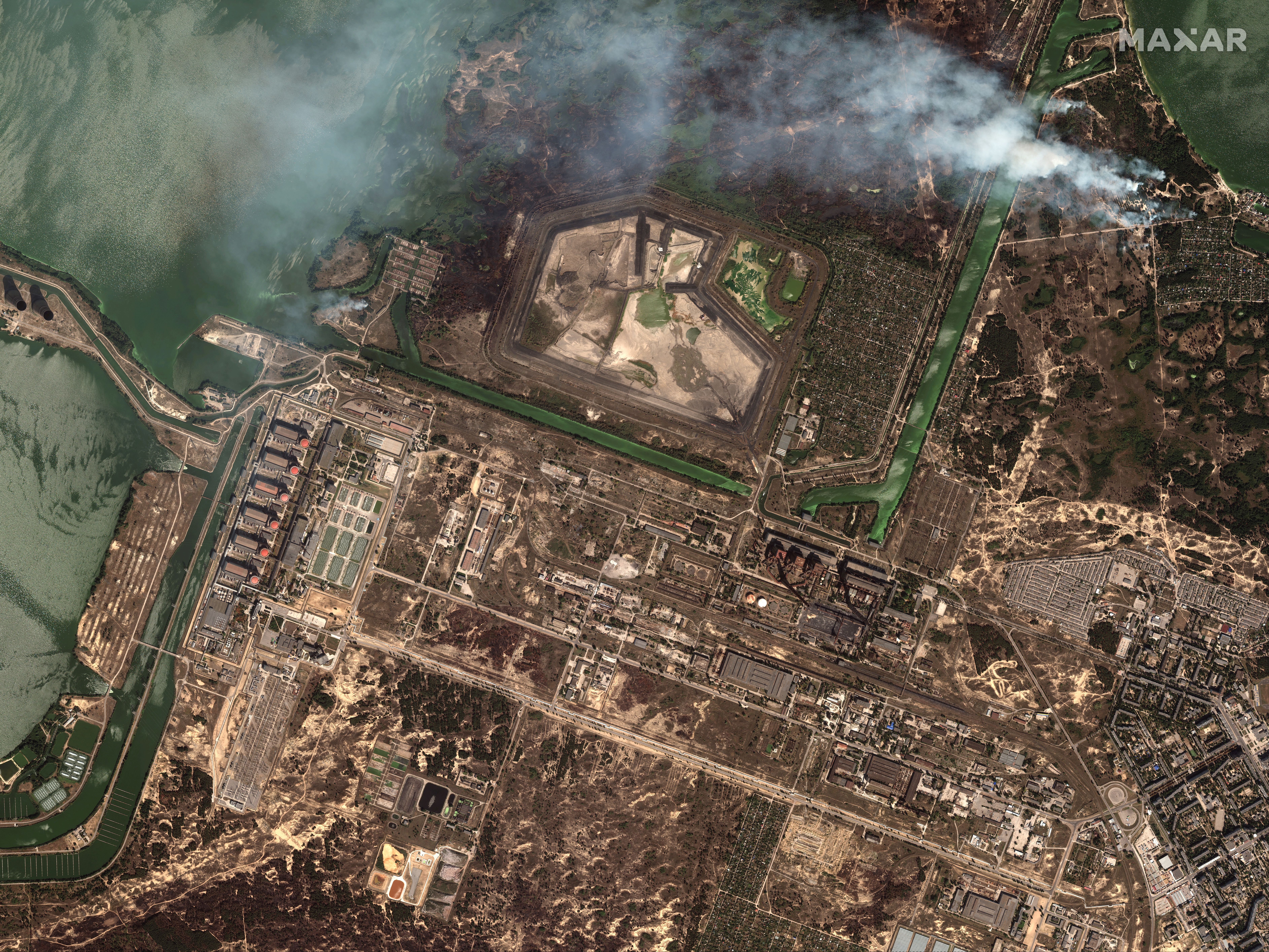 Only one of the Zaporizhzhia nuclear power plant's six reactors is still operating. /Maxar Technologies/AFP

Only one of the Zaporizhzhia nuclear power plant's six reactors is still operating. /Maxar Technologies/AFP

• Ukraine's Zaporizhzhia nuclear power plant has had its last main external power line cut off, although a reserve line has continued supplying electricity to the grid, the International Atomic Energy Agency (IAEA) said. Only one of the station's six reactors remained in operation, the agency said.

• An official from the Russian-installed administration in Zaporizhzhia told a radio station the situation around the nuclear plant was calm early on Sunday. Speaking to Komsomolskaya Pravda radio, official Igor Rogov said there had been no shelling or incursions.

• Ukrainian President Volodymyr Zelenskyy said that "Russia is preparing a decisive energy blow on all Europeans for this winter," citing the Nord Stream 1 pipeline's continued closure, with Russia's state-controlled energy giant Gazprom saying there is a leak.

• Gazprom said that Germany's Siemens Energy was ready to help repair broken equipment on the Nord Stream 1 pipeline but that there was nowhere available to carry out the work. Siemens said it has not been commissioned to carry out maintenance work for the pipeline but it is available.

• Ukraine Prime Minister Denys Shmygal became the first high-level Ukrainian official to visit Germany in months on Sunday, in a sign of eased tensions after a rocky patch between Kyiv and Berlin. The relationship deteriorated with Ukraine unhappy at a lack of aid which is now arriving. Chancellor Olaf Scholz will welcome Shmygal with military honors in the afternoon before talks, with the supply of more weapons on the agenda.

• Gas storage facilities in Germany have reached the October goal of 85 percent despite the extended halt of the Nord Stream 1 pipeline delivering gas from Russia, data from European operators group GIE showed.

• Germany's government will use income from windfall taxes to lower end-consumer prices for gas, oil and coal, said Chancellor Olaf Scholz, announcing measures to mitigate the impact of rising energy prices on its population.

• The leader of Italy's far-right League party, Matteo Salvini, has sparked debate by saying that the unprecedented sanctions the West had imposed on Russia over the Ukraine military operation weren't working. "Several months have passed and people are paying two, three, even four times more for their bills," he told Rtl radio. "And after seven months, the war continues and Russian Federation coffers are filling with money." 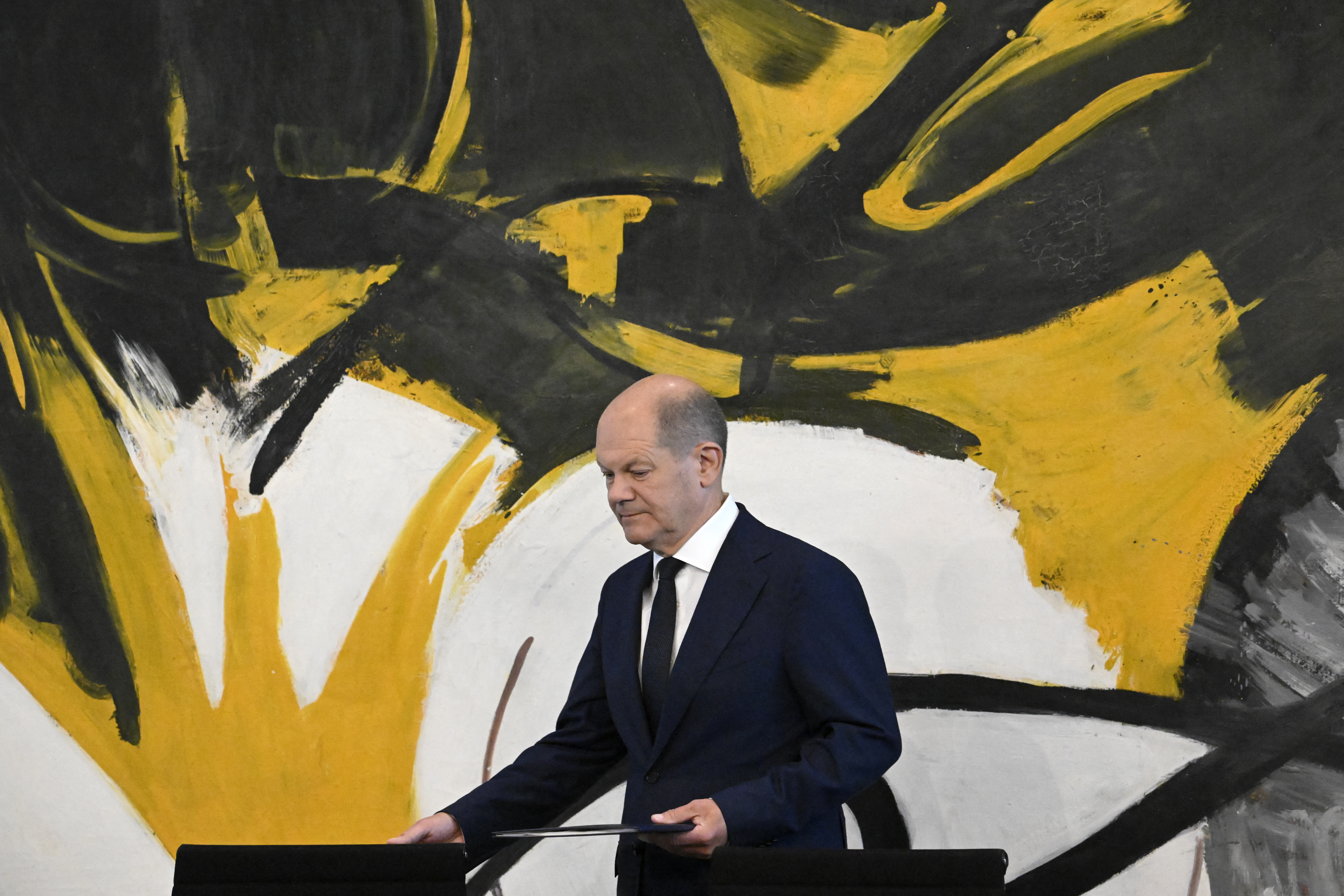 The agency also said, in a statement posted on its website, that only one of the station's six reactors remained in operation.

Zaporizhzhia, with six reactors, is Europe's largest nuclear power station. It has been controlled by Russian troops since soon after their incursion into Ukraine in late February and has become one of the focal points of the conflict, with each side blaming the other for shelling around the plant.

The United Nations (UN) nuclear watchdog's experts now stationed at the plant were told by Ukrainian staff that the site's fourth operational 750 kilovolt power line was down after three others were lost earlier, the IAEA said.

But IAEA experts also learned that a reserve line linking the facility to a nearby thermal power plant was delivering electricity to the external grid. This reserve line can also provide backup power to the ZNPP if needed, it said.

"One reactor is still operating and producing electricity both for cooling and other essential safety functions at the site and for households, factories and others through the grid," the IAEA said.

An IAEA mission, led by the agency's director general Rafael Grossi, toured the plant on Thursday and some experts have remained there pending the release of a report on its operations.

Transmission lines to the plant were cut last week and the facility was cut off from the national grid for the first time in its history, prompting power cuts in various regions of Ukraine. But emergency generators kicked in to provide power needed for vital cooling processes.

Ukrainian President Volodymyr Zelenskyy blamed Russian shelling for the cutoff and said a radiation leak had narrowly been avoided.

Russia's defense ministry said that Ukrainian forces had attempted to capture the Zaporizhzhia plant in an attack on the facility on Friday night - the second such allegation in as many days.