• President Recep Tayyip Erdogan has told Russian counterpart Vladimir Putin on Saturday Turkey can mediate a standoff over Ukraine's Zaporizhzhia nuclear power station, which is occupied by Moscow's troops. "President Erdogan stated that Türkiye can play a facilitator role in the Zaporizhia nuclear power plant, as they did in the grain deal," the Turkish presidency said. READ MORE BELOW

• Russia's Gazprom is set to resume gas supplies to Europe via Nord Stream 1 this weekend, data from the pipeline operator showed on Friday, after a halt that fueled an energy crisis. The resumption on Saturday of deliveries after the three-day stoppage -- which Gazprom said was needed for repairs -- will bring some short-term relief. But it will do little to ease fears about further supply disruptions as winter approaches.

• Ukraine said on Friday that it had struck a Russian base in Energodar, not far from the Zaporizhia nuclear power plant from where it accuses Russia of having withdrawn its armaments before its inspection by a team from the International Agency for atomic energy (IAEA).

• Russian rockets hit Kramatorsk late on Friday, leaving one person wounded, destroying a wholesale market and nine cars, according to Donetsk's region governor. Ukraine said in August that it aims to evacuate two thirds of residents from areas it controls in the eastern battleground region of Donetsk as well as other frontline areas before winter. Russia has repeatedly denied targeting civilian areas after launching what it called a "special military operation" in February.

• Turbine maker Siemens Energy said on Friday that an oil leak does not technically justify the shutdown of the Nord Stream 1 gas pipeline, decided earlier by Russian gas giant Gazprom after the discovery of such leaks in a turbine. "Such a finding is not a technical reason for stopping operation," Siemens Energy said in a statement. "Such leakages do not usually affect the operation of a turbine and can be sealed on site."

• G7 industrialised powers on Friday said they would "urgently" move towards the implementation of a price cap on Russian oil imports, in order to stop Moscow from raking in huge profits from soaring energy prices.

• Russia has requested the U.N. Security Council to meet to discuss shelling of the Russian-held Zaporizhzhia nuclear plant in southern Ukraine.

• Russia has expressed "alarm" to the UN's secretary-general that the US has yet to issue visas for its delegation to attend a General Assembly session later this month, according to a letter seen by AFP.

• The Kremlin said it viewed as "very positive" the arrival of inspectors from the UN atomic agency at the Russian-controlled Zaporizhzhia nuclear plant in southern Ukraine.

• The European Union expects Russia to respect energy contracts it has agreed but is prepared to meet the challenge if it fails to do so, Economic Commissioner Paolo Gentiloni said on Saturday. 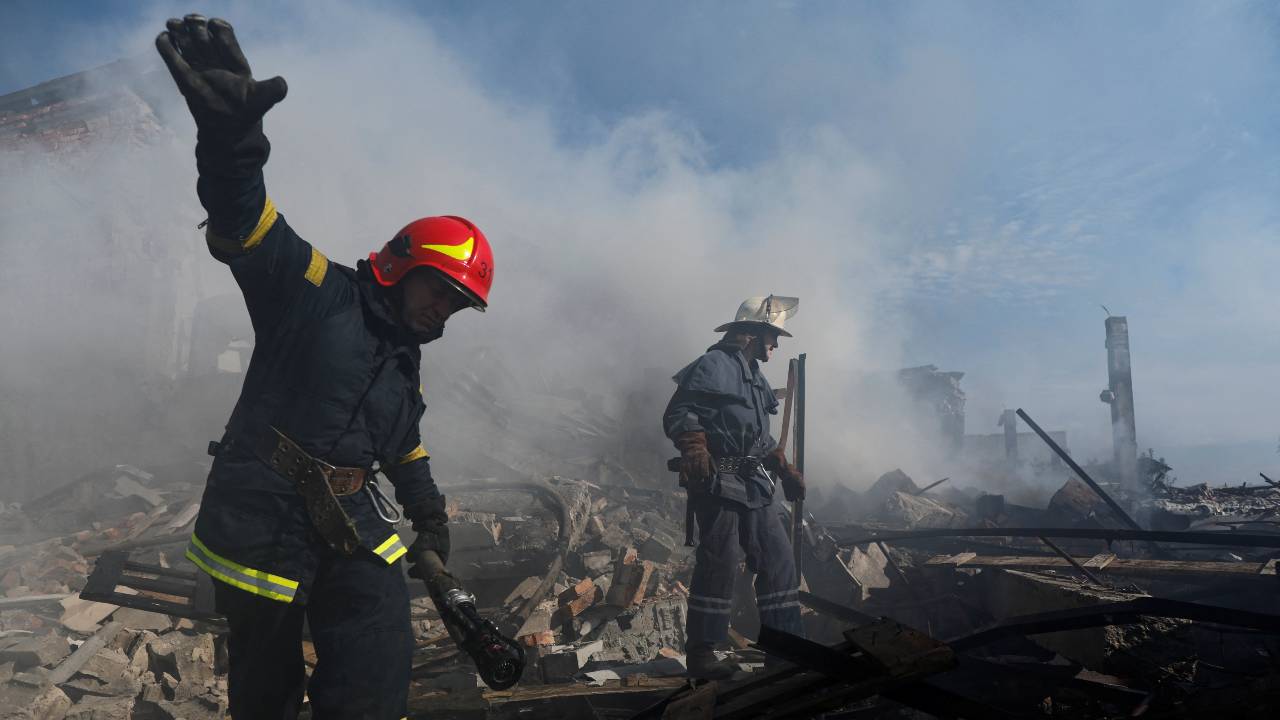 Ukrainian firefighters put out fire in a destroyed wholesale market after a Russian strike in Kramatorsk. /Ammar Awad/Reuters

Ukrainian firefighters put out fire in a destroyed wholesale market after a Russian strike in Kramatorsk. /Ammar Awad/Reuters

"President Erdogan stated that Türkiye can play a facilitator role in the Zaporizhia nuclear power plant, as they did in the grain deal," the Turkish presidency said, referring to a grain export agreement signed in July by Kyiv and Moscow with the United Nations and Türkiye as guarantors.

Last month, Erdogan warned of the danger of a nuclear disaster when he visited Lviv for talks with his Ukrainian counterpart Volodymyr Zelenskyy.

"We are worried. We do not want another Chernobyl," the Turkish leader had said.

There has been growing alarm over Europe's largest nuclear plant, Zaporizhzhia, which is under Russian control.

Ukraine on Friday said it bombed a Russian base in the nearby town of Energodar, destroying three artillery systems and an ammunition depot.

A 14-strong team from the International Atomic Energy Agency (IAEA) visited Zaporizhzhia, with the UN nuclear watchdog's chief, Rafael Grossi, saying that the site had been damaged in fighting.

Türkiye, which has friendly ties with both Moscow and Kyiv, has supplied Ukraine with drones but refused to join Western sanctions against Russia.

Before meeting with Zelenskyy, Erdogan met with Putin in Sochi where the two countries pledged to boost their economic cooperation.

During their phone call on Saturday, Erdogan and Putin agreed to talk further in Samarkand on the sidelines of the Shanghai Cooperation Organisation summit on September 15-16, the presidency said.