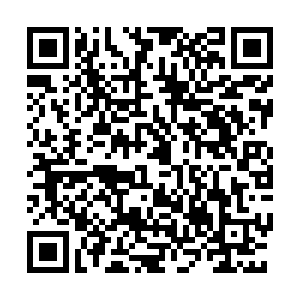 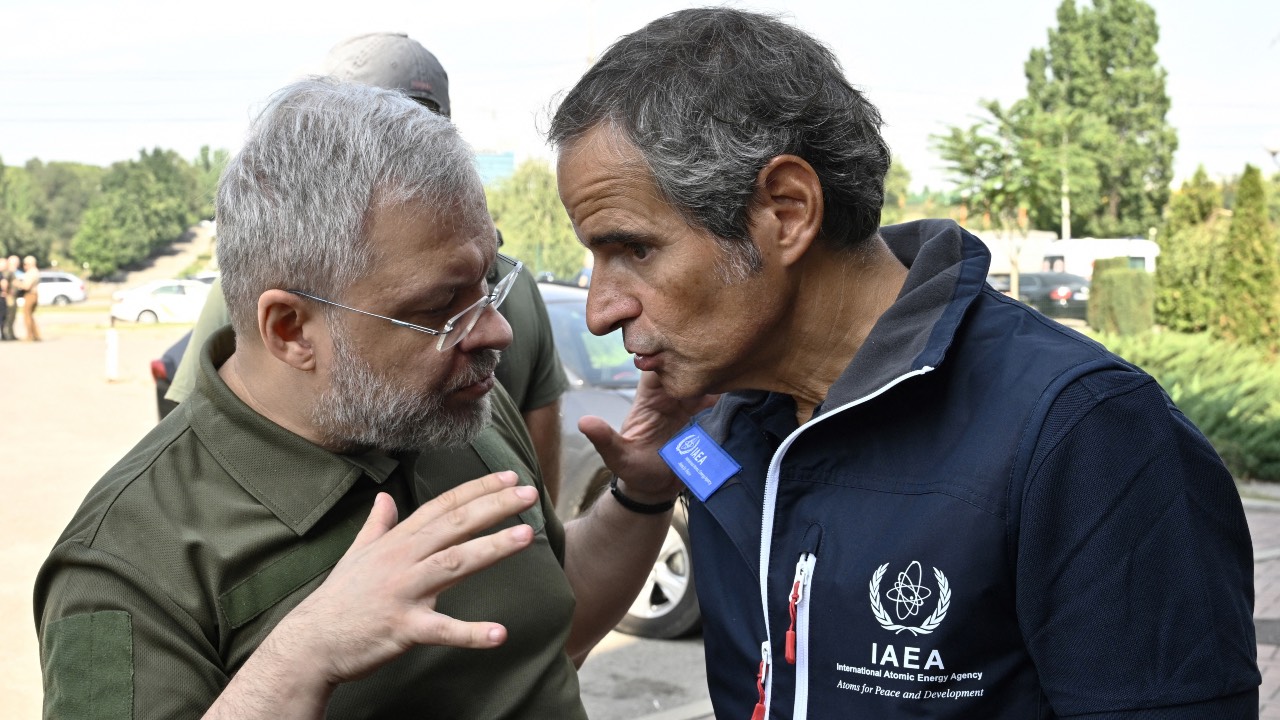 • UN inspectors will have access to the Russian-held Zaporizhzhia nuclear power plant on Thursday and will try to establish "a permanent presence," the International Atomic Energy Agency (IAEA) chief said. "We are preparing for the real work which begins tomorrow," Rafael Grossi, director general of the IAEA said. "We are going to try to establish a permanent presence for the agency starting from then." READ MORE BELOW

• Ukraine urged Russia to halt its shelling of the route to be taken by the IAEA to reach the nuclear plant as the inspectors reached the southern city of Zaporizhzhia. The 14-strong team led by the head of the IAEA set off from Kyiv in the morning, with a convoy including nine white UN-marked cars. They were expected to continue the final leg of their journey on Thursday morning on a route through Russian-occupied territory.

• ​​EU foreign ministers decided to make it more expensive and lengthier for Russians to obtain visas to travel to the bloc, but stopped short of agreeing to the EU-wide visa ban that Ukraine and several member states had called for.

• Ukrainian forces are shelling ferries used by Russia to supply its forces on the west bank of the Dnipro river, Ukrainian presidential advisor Oleksiy Arestovych said.

• Russia's defense ministry said Ukrainian forces, after trying to go on the offensive in three different directions in the Mykolaiv and Kherson regions, had lost over 1,200 military personnel as well as 139 tanks, armored vehicles and trucks.

• Ukraine will ask the UN's cultural watchdog to add the historic port city of Odesa to its World Heritage List of protected sites as Moscow's forces approach the city, officials say. Adding a landmark site or traditional activity to the UNESCO list aims to mobilize attention to ensure it is preserved against threats to its existence. READ MORE BELOW

• Russian energy giant Gazprom suspended gas deliveries to Germany for maintenance on a major pipeline, the latest in a series of supply halts that have fueled an energy crisis in Europe. Gazprom said supplies via Nord Stream 1 were "completely stopped" for "preventative work" at a compressor unit, shortly after the European Network of Transmission System Operators for Gas announced that deliveries had ceased.

• Russia remains committed to its gas supply obligations, but is unable to fulfil them due to economic sanctions that have been imposed on it, the Interfax news agency quoted Kremlin spokesman Dmitry Peskov as saying.

• Hungary said Russian energy giant Gazprom will further increase natural gas deliveries to the EU member in September and October. The announcement by Hungarian Foreign Minister Peter Szijjarto comes as Moscow has reduced or halted deliveries to most European nations which have slapped sanctions on Russia, sending both gas and energy prices soaring. 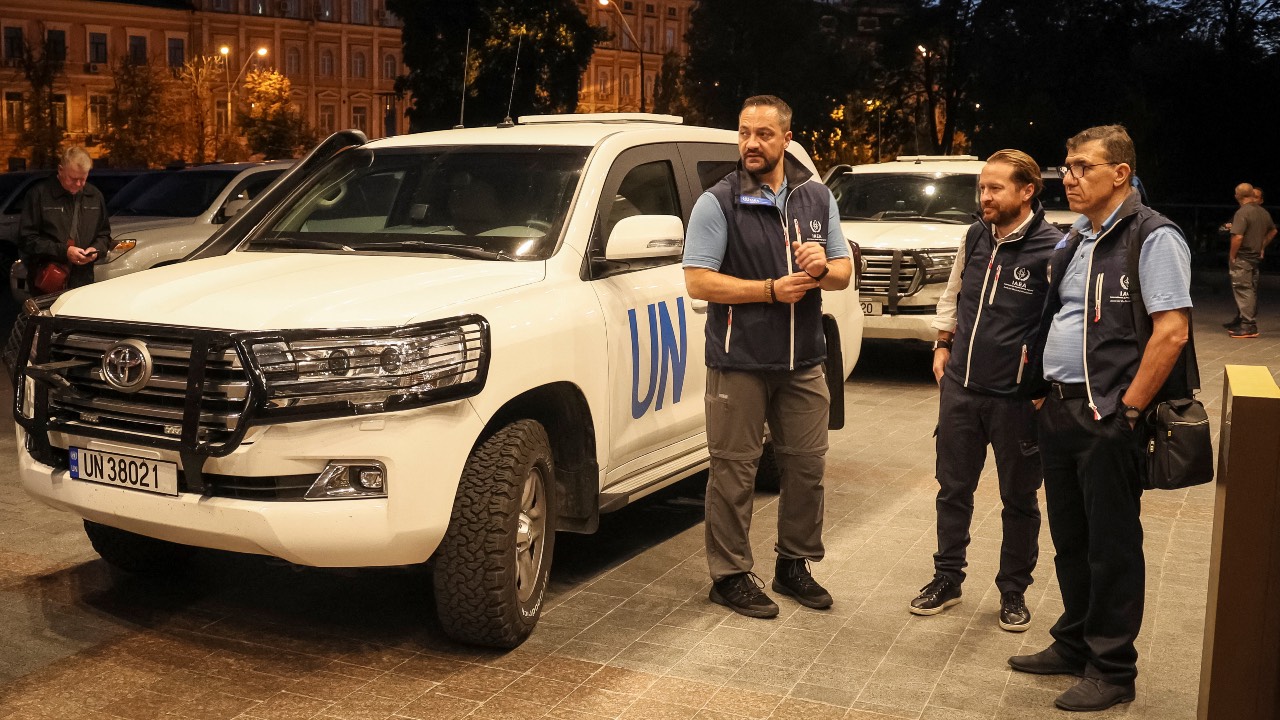 IAEA in Zaporizhzhia: 'The mission will take a few days'

UN nuclear inspectors set off for Ukraine's Zaporizhzhia nuclear plant on Wednesday, saying their mission was to prevent a nuclear accident and try to stabilize the situation after weeks of shelling nearby.

A Reuters news agency reporter following the International Atomic Energy Agency (IAEA) team in a convoy from the capital Kyiv said the inspectors arrived in the nearby city of Zaporizhzhia, where they were likely to spend the night before visiting the plant, which is on territory controlled by Russia, on Thursday.

Russian-installed officials in the area near the power station suggested the visit might last only one day, while IAEA and Ukrainian officials suggested it would last longer.

"The mission will take a few days. If we are able to establish a permanent presence, or a continued presence, then it's going to be prolonged. But this first segment is going to take a few days," Grossi told reporters at a hotel in Zaporizhzhia.

"We have a very important task there to perform – to assess the real situation there, to help stabilize the situation as much as we can," he said, adding the IAEA team had guarantees from both Russia and Ukraine enabling it to enter the war zone.

A Russian military force has been at the plant ever since, as has most of the Ukrainian workforce who have toiled to continue running the facility, which traditionally supplied Ukraine with 20 percent of its electricity needs.

Fighting was reported both near the power station and further afield, with Kyiv and Moscow both claiming battlefield successes as Ukraine mounted a counter-offensive to recapture territory in the south.

'Odesa is in danger right now'

Ukraine's government will ask the UN's cultural watchdog to add the historic port city of Odesa to its World Heritage List of protected sites as Moscow's forces approach the city, officials said.

Russian forces are within several dozen kilometers of Odesa, which blossomed after empress Catherine the Great decreed in the late 18th century that it would be Russia's modern gateway to the Black Sea.

Last month the city was struck by missiles just hours after Russia agreed to allow a shipment of Ukrainian grain exports from the port.

"On July 24, 2022, part of the large glass roof and windows of Odesa's Museum of Fine Arts, inaugurated in 1899, were destroyed," the agency said in a statement.

It said UNESCO experts already on the ground would provide technical assistance so that Odesa could be urgently added to both the World Heritage List and the list of heritage sites in danger.

"If you close your eyes and imagine some parts of Paris, Nice or Marseille, you can imagine Odesa too because it's on the sea coast and the architects were mainly from France and Italy," Tkachenko said.

"It is important due to the war to include the Odesa city center on the World Heritage List; probably it can help to prevent further bomb shelling," he said.