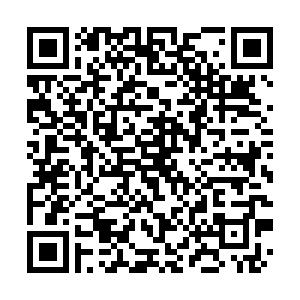 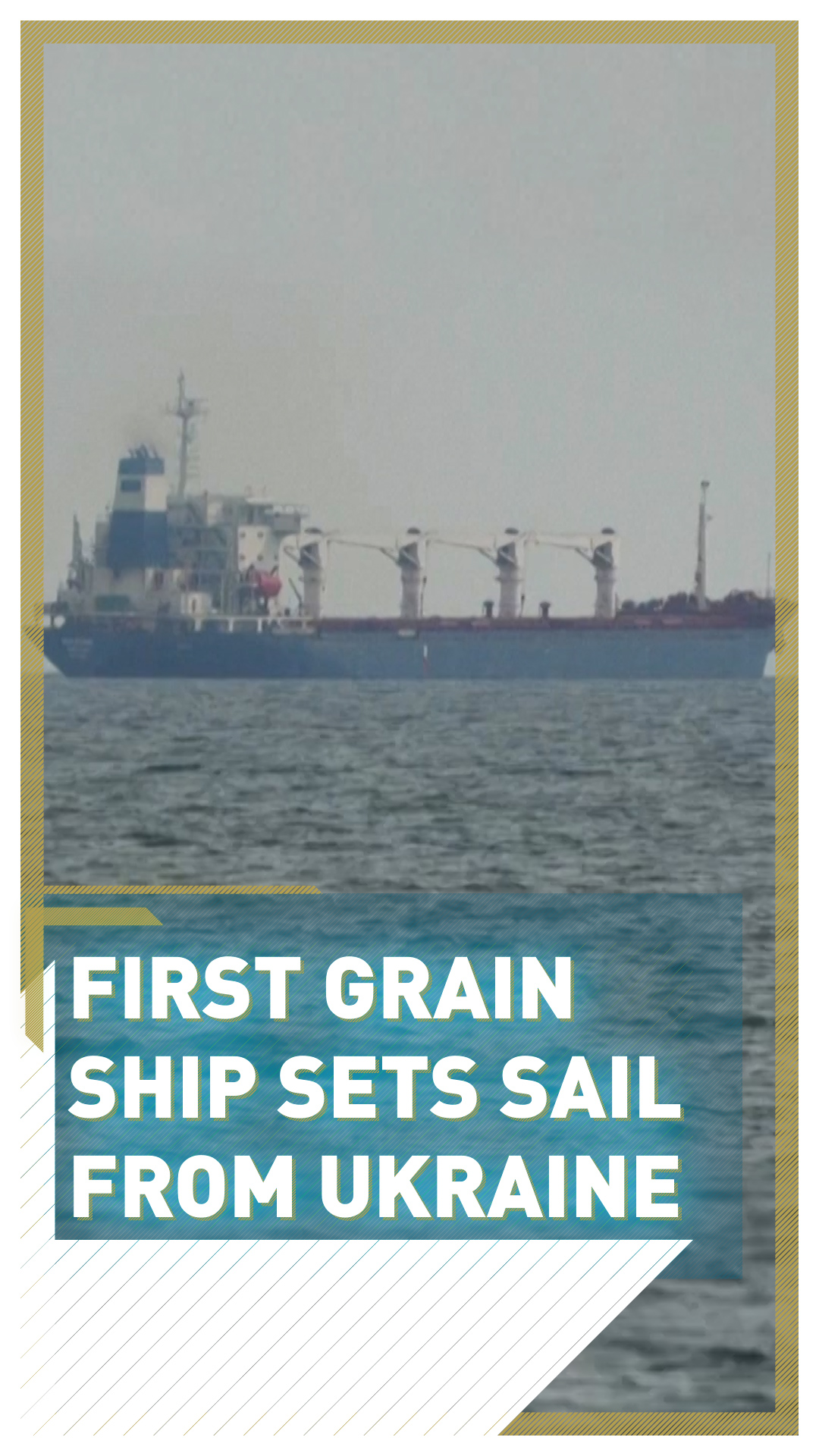 • The first ship carrying grain to leave Ukraine since the start of the conflict has sailed from Odesa under a guaranteed safe passage agreement, with more ships to follow. Amid a global food crisis accelerated by the fighting in Europe, Ukraine's foreign minister hailed the departure as a "relief for the world." READ MORE BELOW

• Despite the landmark departure, President Volodymyr Zelenskyy has said Ukraine's harvest could be half its usual size this year. "Our main goal — to prevent global food crisis caused by Russian invasion," he wrote on Twitter.

• More than 12 missile strikes hit Mykolaiv over the weekend, thought to be the most powerful bombardment the city has seen in over five months of fighting. The attack on the strategically important southern settlement hit homes and schools, according to local officials, with two people confirmed dead and three wounded.

• The two people killed in the strikes were Ukrainian grain tycoon Oleksiy Vadatursky and his wife, with President Zelenskyy describing the deaths as "a great loss for all of Ukraine." Vadatursky was the founder and owner of agriculture company Nibulon, which specializes in the production and export of wheat, barley and corn.

• In Russian-annexed Crimea, five Russian navy staff members were injured by a small explosion after a presumed drone attack on the courtyard of Russia's Black Sea fleet in Sevastopol, the port city's governor Mikhail Razvozhayev said. Ukrainian officials have denied carrying out the attack, calling it "a sheer provocation."

• The Sevastopol attack coincided with Russia's Navy Day, which President Vladimir Putin marked by revealing the addition of "formidable" hypersonic Zircon cruise missiles to the navy in coming months. The missiles can travel at nine times the speed of sound, outrunning air defenses.

• The southern city of Nikopol has also come under heavy attack, according to the governor of Dnipropetrovsk, with up to 50 rockets allegedly hitting residential areas on Sunday.

• President Zelenskyy has called for the evacuation of the eastern Donetsk region, the center of fierce clashes between his country's army and the Russian forces. "Please, follow evacuation. At this phase of the war, terror is a main weapon of Russia," he said.

• Kyiv and Moscow have traded blame over strikes on a jail holding Ukrainian prisoners of war in Kremlin-controlled Olenivka, in which 50 Ukrainians servicemen died. Zelenskyy has accused Moscow of the "deliberate mass murder of Ukrainian prisoners" while Russia's defense ministry says it has invited the International Committee of the Red Cross and the UN to visit the site "in the interests of an objective investigation." 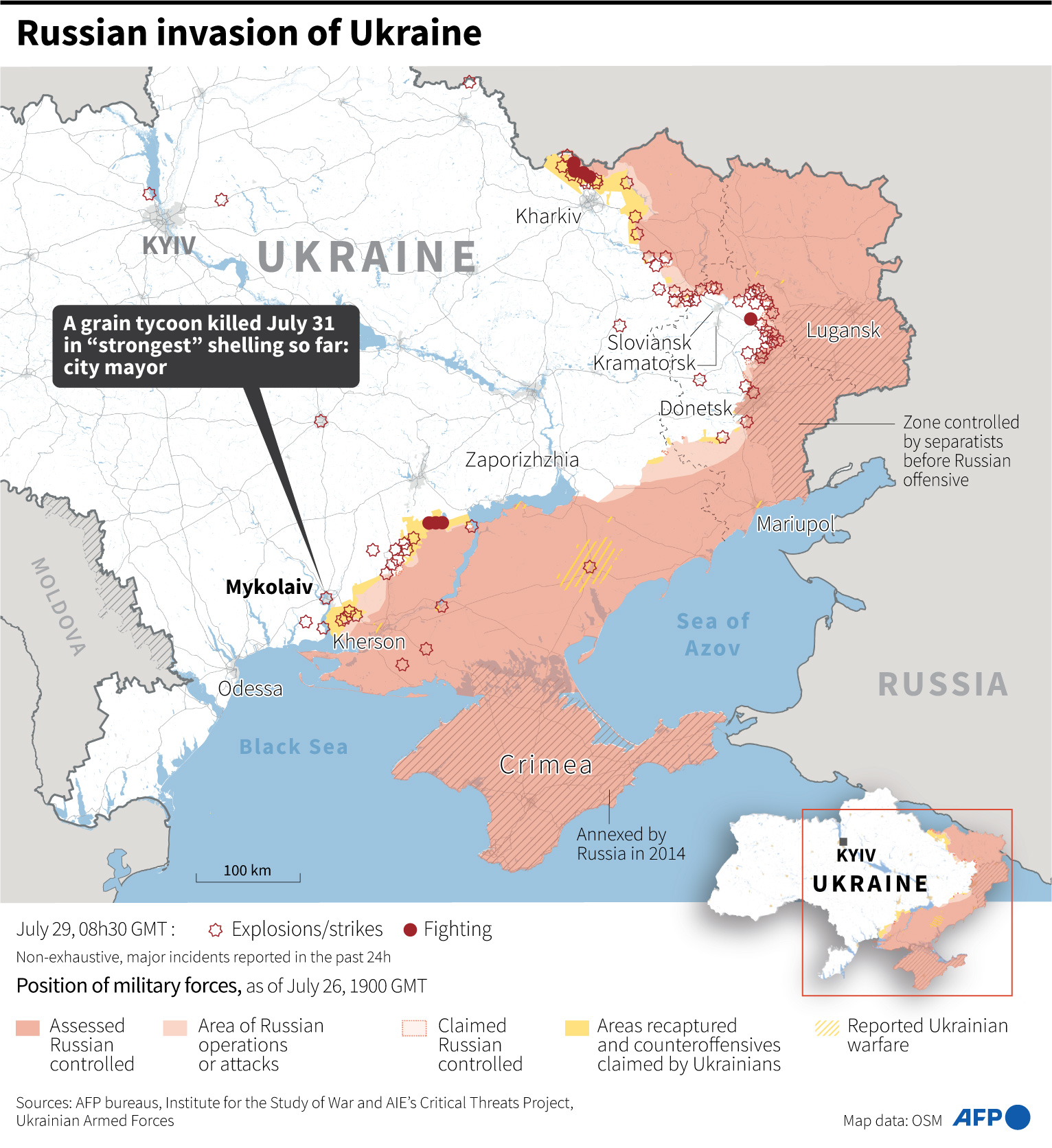 Map showing the situation in Ukraine as of July 29, locating Mykolaiv where a grain tycoon was killed on July 31. /Simon Malfatto, Sophie Ramis, Kenan Augeard/AFP

Map showing the situation in Ukraine as of July 29, locating Mykolaiv where a grain tycoon was killed on July 31. /Simon Malfatto, Sophie Ramis, Kenan Augeard/AFP

A ship carrying grain left the Ukrainian port of Odesa for Lebanon on Monday under a safe passage agreement, the first departure since the Russia launched what Kyiv calls a shipping blockade of its Black Sea ports five months ago.

Ukraine's foreign minister Dmytro Kuleba called it "a day of relief for the world," particularly for countries worst hit by food shortages and hunger because of the disrupted shipments.

The landmark shipment was made possible after Türkiye and the UN helped secure a grain-and-fertilizer export agreement between Russia and Ukraine last month.

Russia and Ukraine make up nearly a third of global wheat exports, but Western sanctions and fighting along Ukraine's eastern seaboard have stopped grain ships leaving the ports.

Moscow has denied responsibility for the food crisis, blaming the sanctions for slowing exports and Ukraine for mining its ports.

The deal aims to allow safe passage for grain shipments in and out of Odesa, Chornomorsk and the port of Pivdennyi.

Turkish Defense Minister Hulusi Akar said the Razoni would anchor in the Bosphorus off Istanbul and will be inspected by a joint team of Russian, Ukrainian, UN and Turkish representatives.

Ukrainian presidential officials have said a further 17 ships are docked in Black Sea ports with almost 600,000 tonnes of cargo, mostly grain, with more shipments to follow.

According to Kyiv, unlocking the ports will provide at least $1 billion in foreign exchange revenue for Ukraine's economy, allowing the agricultural sector to plan next year's sowing season.