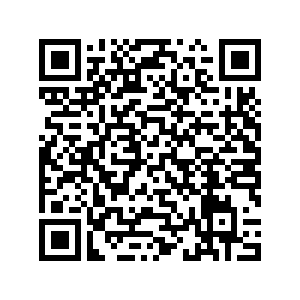 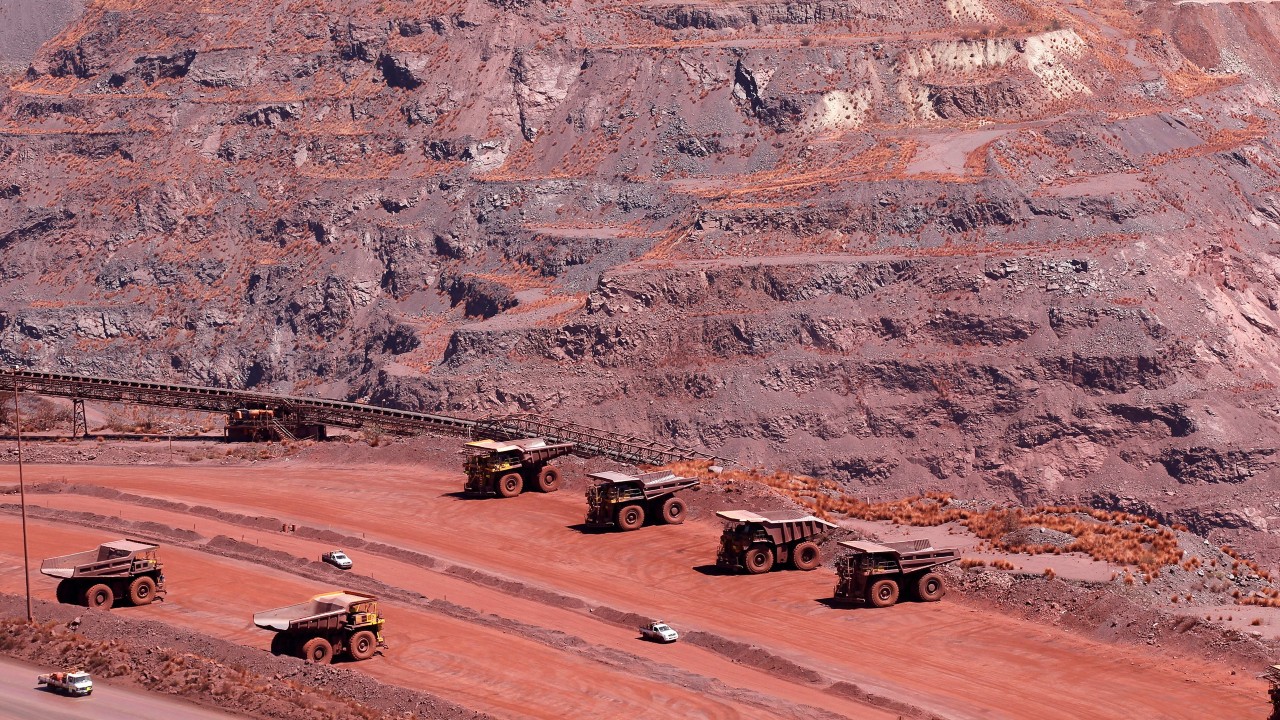 From today, as a world we are living in ecological debt, again. This year's 'Earth Overshoot Day' falls on July 28 – which is once more earlier than last year's.

Calculated using UN and other publicly available data, the day falls on the date when humanity's demand for natural resources and services exceeds what Earth can realistically regenerate within the year. In other words, humans have exhausted supplies such as trees, fish and land, outstripping the planet's annual capacity to take in waste products like carbon dioxide.

The pace at which we are reaching Overshoot Day has accelerated. The world's capacity to use up all the natural resources available for the year was early October in 2000, shifting to mid-August by 2014.

Currently, it happens in July, which means that barely halfway through the year, humankind has consumed more resources than can be replaced – in which case, from today onwards, we are actively and unsustainably depleting the Earth's resources.

But some countries have played a bigger part than others. 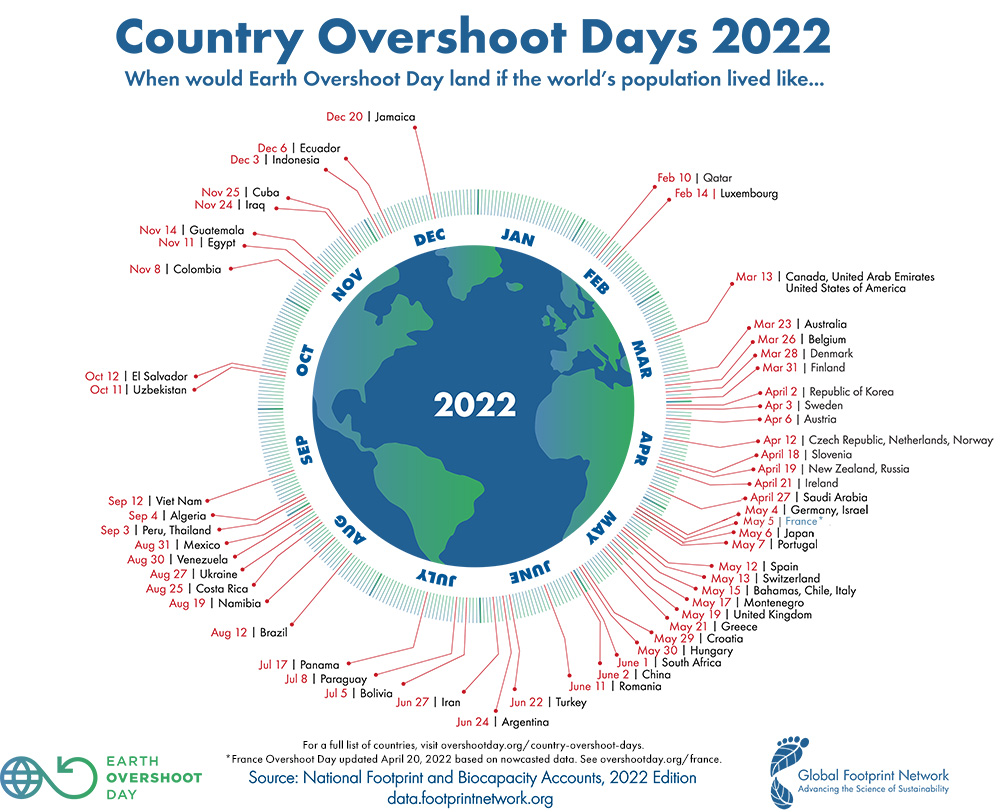 Qatar and Luxembourg were one of the worst global footprint culprits, managing just over two months into the year. /National Footprint and Biocapacity Accounts

Qatar and Luxembourg were one of the worst global footprint culprits, managing just over two months into the year. /National Footprint and Biocapacity Accounts

While Middle Eastern and European nations generally come out worst – with Qatar's overshoot day coming on February 10 and Luxembourg's four days later – there are many countries who go much further into the year, with Jamaica not overshooting until December 20th, shortly after Indonesia and Ecuador.

Ecuador was the first country in the world to grant legally enforceable rights to nature to "exist, flourish and evolve," as a result of a popular vote. Gustavo Manrique, its Minister of Environment, Water and Ecological Transition, said on Thursday:

"Earth Overshoot Day demonstrates that the current system of production and consumption is not compatible with the intention to continue to inhabit this planet. To better protect our natural resources and manage our demand for them, it is necessary to take concrete joint actions aimed at a new development model based on sustainability and regeneration. From Ecuador we call on the world to commit to this cause."

Accroding to the Global Footprint Network, if all people on the planet had the ecological footprint of the average resident of Qatar, we would need 4.8 Earths. Living like the U.S. would require 3.9 Earths. 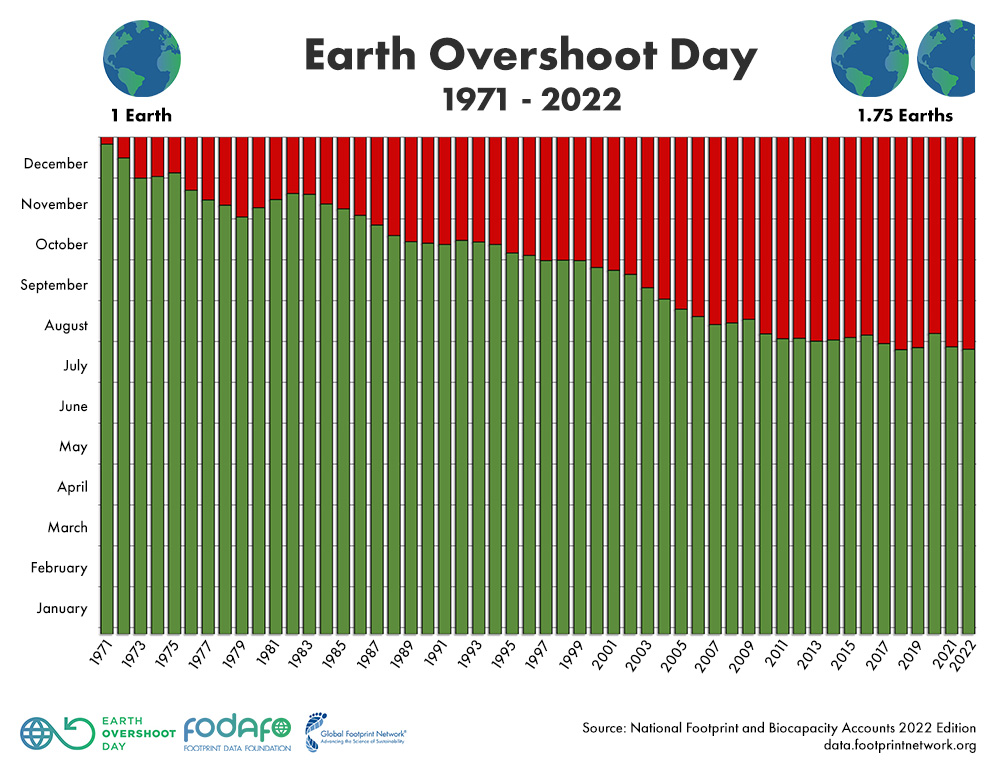 It would take 1.75 Earths to provide resources for the world's current population. /National Footprint and Biocapacity Accounts 2022

It would take 1.75 Earths to provide resources for the world's current population. /National Footprint and Biocapacity Accounts 2022

In response to today's Earth Overshoot Day, the Global Footprint Network said "the greatest potential for large-scale change lies with governments and businesses when they align their policies and strategies with the possibilities of the planet."

With unprecedented temperatures hitting Europe this summer, ecologists are concerned that by using up resources so early into the year, we could be causing irreversible impacts on the world's ecology.

In a statement, the World Wildlife Fund says "Our current food system is unsustainable. We need to feed the world's growing population but our current practices are already harming nature and fueling climate change."