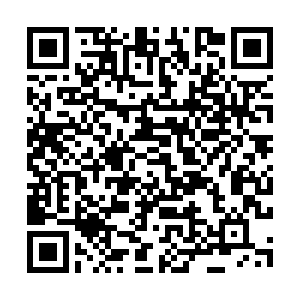 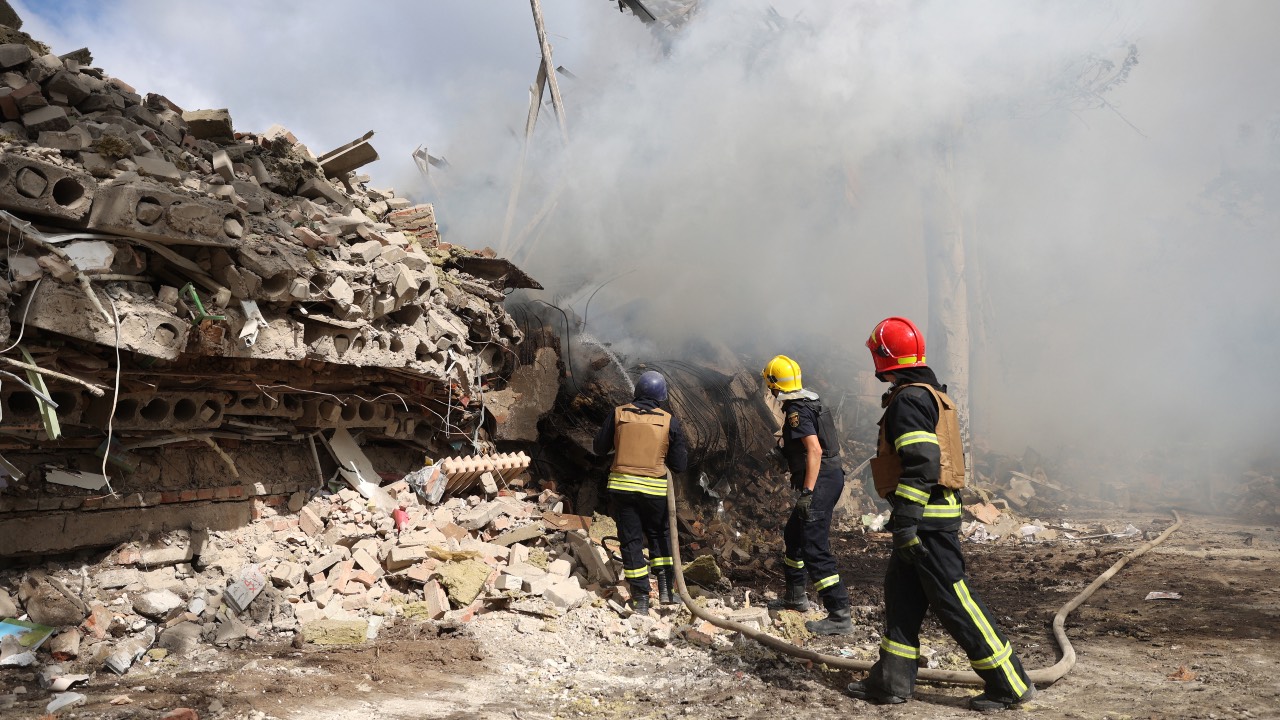 • Belarus President Alexander Lukashenko said Russia, Ukraine and the West must agree to halt the Ukraine conflict to avoid the "abyss of nuclear war" and insisted Kyiv should accept Moscow's demands. He also said the West wanted to start a conflict with Russia and "fomented this war" in Ukraine.

• President Volodymyr Zelenskyy posted a video on Instagram from his office to reassure Ukrainians that he is well after what he said was a fake news report about his health by Russian hackers. Zelenskyy, 44, made his remarks on the same day as the Kremlin dismissed what it said were false reports that Russian President Vladimir Putin was unwell.

• Russia's military is likely to start an operational pause of some kind in Ukraine in the coming weeks, giving Kyiv a key opportunity to strike back, Britain's spy chief said, addressing the Aspen Security Forum in Colorado.

• Grain shipments disrupted by Moscow's offensive could resume from three Ukrainian ports on the Black Sea under the terms of a deal being discussed, a member of Kyiv's delegation for negotiations with Moscow said.

• The U.S. promised to send four more HIMARS advanced rocket systems to Ukraine to help its forces fight Russia's advance in the eastern Donbas region. "Ukraine needs the firepower and the ammunition to withstand this barrage and to strike back," Defense Secretary Lloyd Austin told reporters.

• Kremlin spokesman Dmitry Peskov said that all difficulties with supply of Russian natural gas to Europe are caused by Western restrictions. Russia restored critical gas supplies to Europe through Germany via the Nord Stream pipeline after 10 days of maintenance, but uncertainty lingered whether the Kremlin would still trigger an energy crisis on the continent this winter. "It's working," a Nord Stream spokesman said, without specifying the amount of gas being delivered.

• Turkey said a new "permanent committee" would meet Finnish and Swedish officials in August to assess if the two nations are complying with Ankara's conditions to ratify their NATO membership bids. NATO member Turkey has demanded the extradition of dozens of suspected "terrorists" from both countries under an accession deal the three signed last month.

• The European Union imposed asset freezes and visa bans on ten Syrians, accusing them of recruiting mercenaries to fight for Russia in its offensive in Ukraine. The names of the Syrians, along with two private security firms, were added to the existing EU sanctions list and published in the 27-member bloc's official journal. 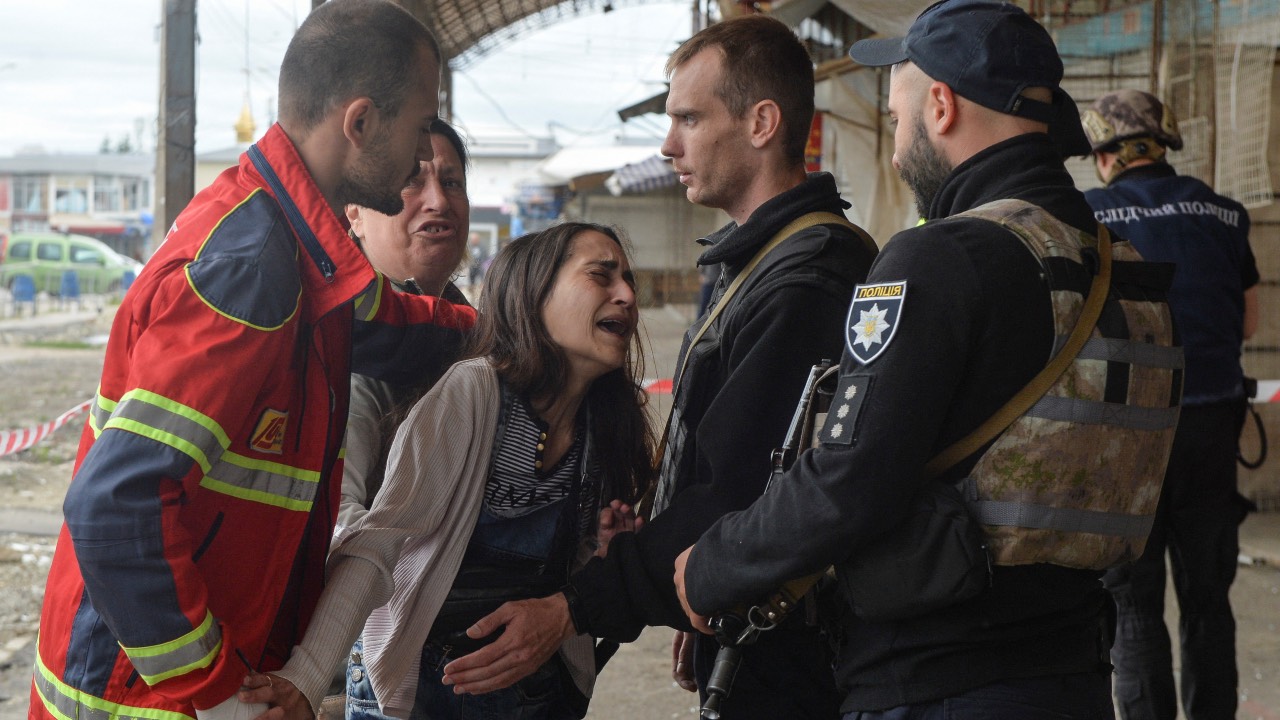 A woman reacts next to the body of her husband, killed by a Russian military strike in Kharkiv, Ukraine. /Sofiia Gatilova/Reuters

A woman reacts next to the body of her husband, killed by a Russian military strike in Kharkiv, Ukraine. /Sofiia Gatilova/Reuters

Olena Zelenska: 'Help us to stop this terror against Ukrainians'

Ukraine's first lady made an emotional pitch to U.S. lawmakers for more weapons to help her country fight Russia, saying she spoke for millions of parents fearing for their children.

Taking a cue from her husband President Volodymyr Zelenskyy, who showed graphic images during his virtual appearance before the U.S. Congress, Olena Zelenska - who appeared in person - displayed images of joyful children who were killed or maimed by Russia.

"We want every father and every mother to be able to tell their child, 'Go to sleep peacefully, there will be no more air strikes, no more missile strikes.' Is this too much to wish for?" Zelenska asked.

Zelenska, stepping into a more public role after staying sheltered immediately following Russia's February 24 offensive, acknowledged it was unusual for a first lady to seek weapons but said it was vital.

Ukraine needs air-defense systems "in order for rockets not to kill children in their strollers," she said.

"Help us to stop this terror against Ukrainians," she said.

U.S. lawmakers will go on recess next week and "this is normal," she said.

"It is precisely this normalcy that we are deprived of now. Will my son be able to return to school in the fall? I don't know, like millions of mothers in Ukraine."

Both President Joe Biden and the U.S. Congress have been keen on supplying weapons to Ukraine, approving a $40 billion package in May.

But with Russian forces advancing in the east, Ukraine has been seeking to secure a more steady flow of weapons including longer-range precision rockets.

U.S. lawmakers applauded Zelenska as she thanked them for assistance and said, "While Russia kills, America saves." 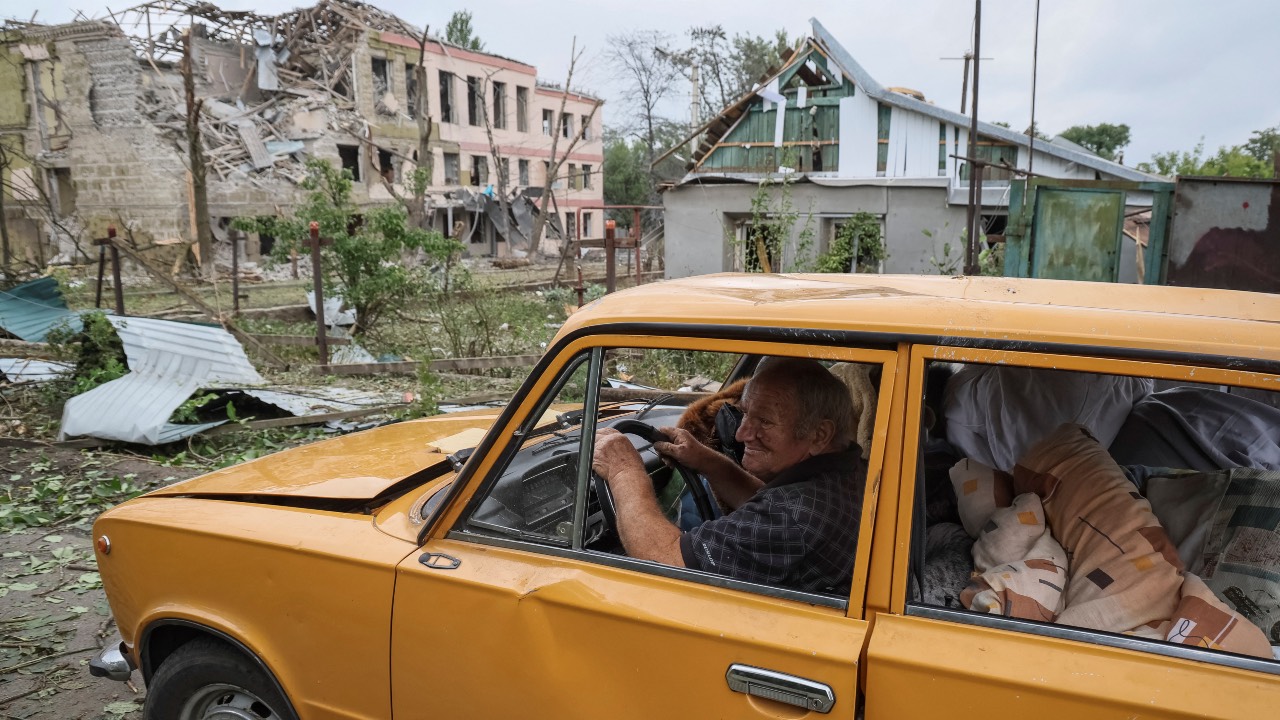 A local resident Yevhen Habach, 71, reacts as he leaves his house, damaged by a Russian military strike in Kramatorsk, in Donetsk region. /Gleb Garanich/Reuters

A local resident Yevhen Habach, 71, reacts as he leaves his house, damaged by a Russian military strike in Kramatorsk, in Donetsk region. /Gleb Garanich/Reuters

Putin's designs on Ukraine beyond the eastern Donbas region

Russian Foreign Minister Sergei Lavrov said President Vladimir Putin's designs on Ukraine go beyond the eastern Donbas region, which Moscow made its focus after failing to take the capital Kyiv and second city of Kharkiv.

In an interview with Russian state media he said, "it is not only about the DNR and LNR", referring to the two territories that make up the Donbas, but also about the Russian-occupied southern Kherson region, the partly-occupied southeastern Zaporizhzhia region "and a number of other territories".

He said Western arms shipments to Kyiv, including the supply of medium-range U.S. multiple rocket launchers, had made Moscow review its aims.

"By confessing dreams to grab more Ukrainian land, (the) Russian Foreign Minister proves that Russia rejects diplomacy and focuses on war and terror," Ukraine's Foreign Minister Dmytro Kuleba said on social media, calling "on all partners to step up sanctions pressure on Russia and speed up arms deliveries to Ukraine."