Fighting has been raging in the eastern city of Severodontesk for weeks. Aris Messinis / AFP

Fighting has been raging in the eastern city of Severodontesk for weeks. Aris Messinis / AFP

• Ukraine said that its forces have been pushed back from the center of the eastern city of Severodonetsk, where fighting with Russia has raged for weeks. "The enemy, with support of artillery, carried out assault operations in the city of Severodonetsk, had partial success, pushed our units away from the city center," the Ukrainian military said on Facebook. READ MORE BELOW

• Russia's RIA news agency quoted a pro-Moscow separatist spokesperson, Eduard Basurin, as saying the last bridge over the river linking the two cities had been destroyed on Sunday. Ukrainian troops were effectively blockaded in Sievierodonetsk and should surrender or die, Basurin said.

• Ukraine has issued increasingly urgent calls for more Western weapons to help defend Severodonetsk, which Kyiv says could hold the key to the outcome of the battle for control of the eastern Donbas region and the future course of the war.

• The Wikimedia Foundation, which owns Wikipedia, has filed an appeal against a Moscow court decision demanding that it remove information related to the Russian invasion of Ukraine, arguing that people have a right to know the facts. The Wikimedia Foundation had been fined 5 million rubles ($88,000) for refusing to remove what the court termed disinformation from Russian-language Wikipedia articles.

• Russia earned $98 billion from fossil fuel exports during the first 100 days of its war in Ukraine, with most of it sent to the European Union, according to research from the independent, Finland-based Centre for Research on Energy and Clean Air.

• India and other Asian nations are becoming an increasingly important source of oil revenues for Moscow. India has consumed nearly 60 million barrels of Russian oil in 2022 so far, compared with 12 million barrels in all of 2021, according to commodity data firm Kpler. Shipments to other Asian countries have also increased in recent months but to a lesser extent.

• Ukraine's President Volodymyr Zelenskyy said in a video address that Russia was trying to pour military reserves into the Donbas. "Severe fighting is ongoing there - literally for every meter," he said.

• Zelenskyy said attacks that resulted in child casualties had created a lasting image of Russia for the rest of the world rather than the images Moscow was trying to project. "Not Peter the Great, not Lev Tolstoy, but children injured and killed in Russian attacks," he said. He was responding to Vladimir Putin's claim his attack was similar to Peter the Great's war with the Kingdom of Sweden in the 18th century.

• The number of nuclear weapons in the world is set to rise in the coming decade after 35 years of decline as global tensions flare amid Russia's war in Ukraine, according to estimates by the Stockholm International Peace Research Institute. The nine nuclear powers - Britain, China, France, India, Israel, North Korea, Pakistan, the U.S. and Russia - had 12,705 nuclear warheads in early 2022, or 375 fewer than in early 2021.

• Finland and Sweden's bid to join NATO is being blocked by Turkey and NATO chief Jens Stoltenberg said it was important to note that no other NATO ally had suffered more terrorist attacks than Turkey, and that therefore its concerns needed to be taken seriously.

• The head of the Russian Committee for the Prevention of Torture said Sunday he had disbanded the organization after it was branded a "foreign agent" by authorities, a label he called an "insult." "We don't want to continue working by being labeled 'foreign agents.' We consider this term an insult and slander," Sergei Babinets said on Telegram. 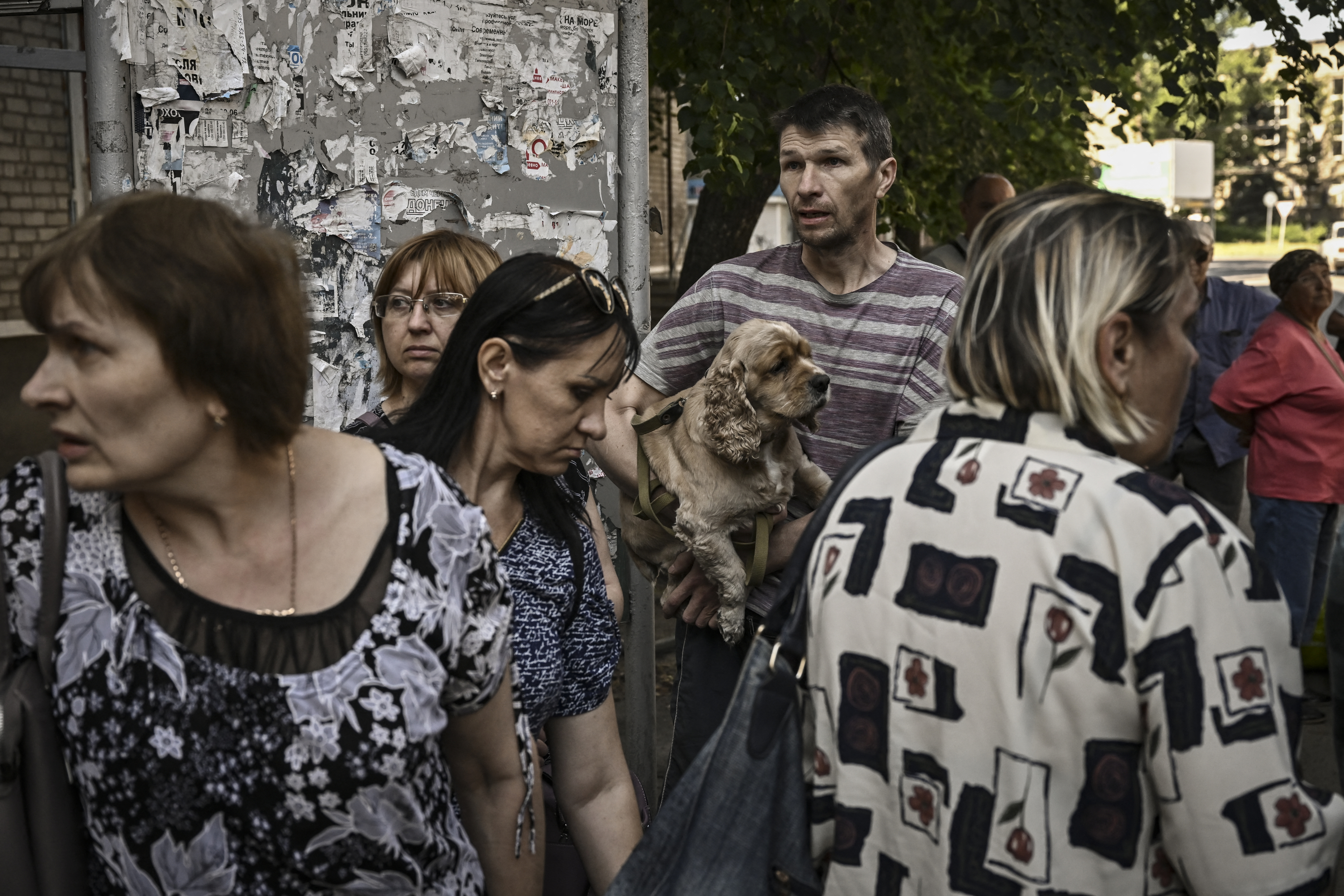 People have been evacuated from the Donbas region with Volodymyr Zelenskyy saying Russia was pouting military reserves in. Aris Messinis / AFP

People have been evacuated from the Donbas region with Volodymyr Zelenskyy saying Russia was pouting military reserves in. Aris Messinis / AFP

Ukraine said on Monday that its forces have been pushed back from the centre of the eastern city of Sievierodonetsk, where fighting with Russia has raged for weeks. "The enemy, with support of artillery, carried out assault operations in the city of Sievierodonetsk, had partial success, pushed our units away from the city centre," the Ukrainian military said on Facebook.

The local governor, Sergiy Gaiday, said "the Russians were partially successful at night" in the city. They "pushed our troops from the centre and continue to destroy our city," he said on Facebook.

According to Gaiday, the Russians control "more than 70 percent" of the city. Gaiday said the Azot chemical plant - where 500 civilians, including 40 children are taking shelter - is being "heavily shelled" by Russian forces.

"We are trying to negotiate a humanitarian corridor" for the civilians, Gaiday said in a separate video on Telegram. He added that the efforts had "for now no success."

Gaiday earlier said Moscow's forces were "gathering more and more equipment" to "encircle" Sievierodonetsk and nearby Lysychansk. He said that three civilians were killed by shelling in Lysychansk, across a river from Sievierodonetsk, in the last 24 hours, including a six-year-old boy.

The governor said Ukrainian security services had exposed 50 "traitors" in Lysychansk, who he said were sending information to Russian forces. President Volodymyr Zelenskyy said late on Sunday that Ukrainian and Russian forces were fighting for "literally every meter" in Sievierodonetsk.