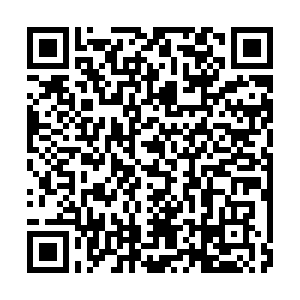 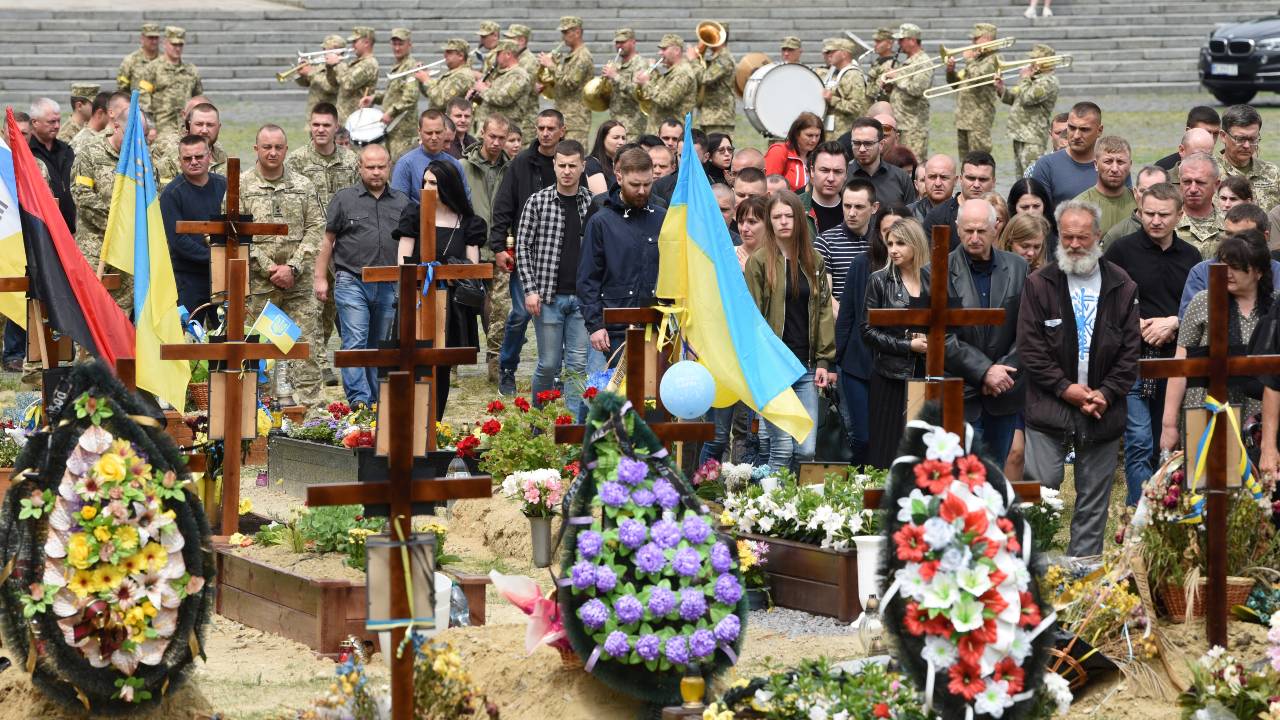 • European Commission President Ursula von der Leyen has told Ukraine that the EU executive will give its opinion next week on whether Ukraine should join the European Union. READ MORE BELOW.

• Ukraine's state nuclear firm Energoatom said it had helped restore an internet connection between the International Atomic Energy Agency and the servers of Ukraine's Zaporizhzhia nuclear power plant, which is occupied by Russian forces.

• Up to 300,000 tonnes of grain may have been stored in warehouses that Kyiv says were destroyed by Russian shelling last weekend, Ukraine's deputy agriculture minister Taras Vysotskyi said.

• A captured fighter from South Korea will go on trial in the self-proclaimed Donetsk People's Republic (DPR), which is controlled by pro-Russian separatists, Interfax news agency reported.

• Ukraine is doing everything possible to save three foreign nationals - two Britons and a Moroccan - who were sentenced to death by proxy authorities in Donbas for fighting for Ukraine, a lawmaker in Ukraine's parliamentary security and defence committee said.

• Authorities in the Moscow-occupied city of Kherson in southern Ukraine handed out 23 Russian passports to local residents for the first time on Saturday, news agencies reported. The procedure was facilitated by a decree signed by Russian President Vladimir Putin in May.

• The Russian Defense Ministry said on Saturday that its air defence forces had shot down three Ukrainian war planes - two MIG-29 planes in the Mikolayiv region and one Su-25 fighter jet in the Kharkiv region, the ministry said in a statement. There was no immediate comment from Ukraine.

• Speaking remotely, Zelenskyy has told 575 delegates from 40 countries in Singapore that the conflict's outcome will affect the future of the entire international order. READ MORE BELOW

• The office of Ukraine's prosecutor general said on Saturday that it has learned about the deaths of 24 more children in Mariupol. In total, the office said that at least 287 children have died since the start of the Russian invasion of Ukraine on Feb. 24th. More than 492 have been wounded.

• Russian forces around Ukraine's Sievierodonetsk had not made advances into the south of the city as of Friday, Britain's Defence Ministry said.

• The world's chemical weapons watchdog - the Organisation for the Prohibition of Chemical Weapons - said it is keeping a close eye on Ukraine since Russia's invasion to monitor "threats of use of toxic chemicals as weapons." 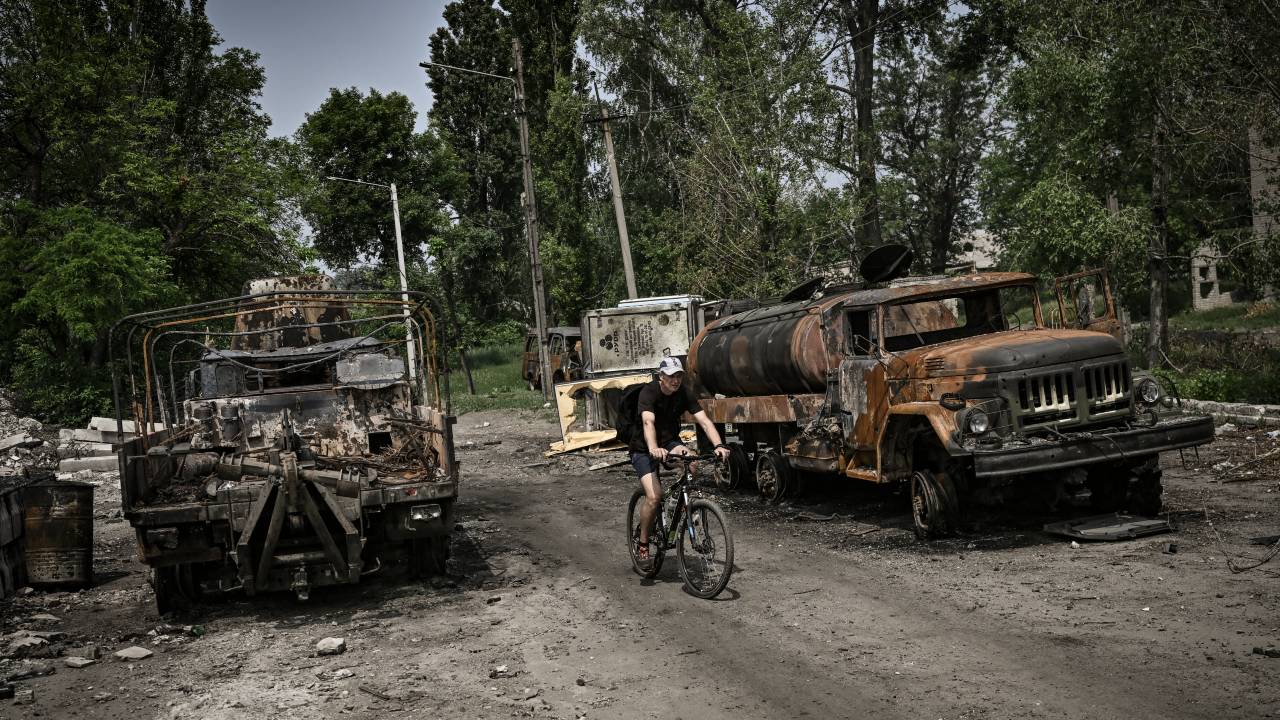 A man rides his bicycle between two destroyed military trucks in the city of Lysychansk, eastern Ukrainian region of Donbas. /AFP/Aris Messinis

A man rides his bicycle between two destroyed military trucks in the city of Lysychansk, eastern Ukrainian region of Donbas. /AFP/Aris Messinis

European Commission President Ursula von der Leyen told President Volodymyr Zelenskyy during a visit to Kyiv that the EU executive's opinion on Ukraine's request to join the European Union would be ready by the end of next week.

In a joint news conference in Kyiv, von der Leyen said Saturday's discussions with Zelenskyy "will enable us to finalise our assessment by the end of next week," about whether to recommend Ukraine as a candidate for membership.

The move, whose timing was widely expected, would only be a preliminary step in a long process.

All 27 EU governments would have to agree to grant Ukraine candidate status, after which there would be extensive talks on the reforms required before Kyiv could be considered for membership.

Von der Leyen, in her second trip to Kyiv since the start of the war in February, reminded Zelenskyy that, despite progress on administrative reforms and elsewhere, much still needed to be done.

"You have done a lot in strengthening the rule of law but there is still a need for reforms to be implemented, to fight corruption for example," she told the joint news conference.

Ukrainian President Volodymyr Zelenskyy, speaking remotely at the Shangri-La Dialogue in Singapore, said the outcome of the war in his country affected not just Ukraine, but the future of international order.

His country is seeking to push the Russians out of areas it has controlled since early in the war, and is defending against ferocious Russian attacks in the country's east, particularly around the city of Sievierodonetsk.

Noting the support so far from the West and its Asian allies, Zelenskyy - addressing the event via video link from an undisclosed location in Ukraine's capital, Kyiv - said it was crucial that the nations sending aid do not let up.

"I am grateful for your support... but this support is not only for Ukraine, but for you as well," he said. "It is on the battlefields of Ukraine that the future rules of this world are being decided along with the boundaries of the possible."

He noted that Russia is blocking ports in the Black Sea and Azov Sea, keeping Ukrainian food exports from the world market. That hurts not just Ukrainians, but the entire world, he said.

"If ... due to Russian blockades we are unable to export our foodstuffs, the world will face an acute and severe food crisis and famine in many countries in Asia and Africa," he said.