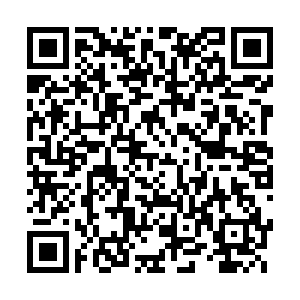 • Ukrainian forces have pulled back to the outskirts of the industrial city of Sievierodonetsk amid a fierce Russian assault, the regional governor said, another key moment in one of the most intense battles of the conflict. READ MORE BELOW

• More than 1,000 Ukrainian soldiers who surrendered in the city of Mariupol have been transferred to Russia for investigation, a Russian law enforcement source told the state-owned Tass news agency.

• Ukraine and Russia have each handed over the bodies of 50 of their deceased soldiers in an exchange that included 37 Ukrainian soldiers killed at Mariupol's Azovstal steelworks, according to the Ukrainian Ministry for Reintegration.

• Ukraine says around 600 people are being held prisoner for resisting Russian occupation in the Kherson region, claiming that they were being tortured. Kherson was the first major Ukrainian city to fall in early March, with videos emerging of residents staging defiant protests against Russian forces.

• Russian and Turkish defense ministers are discussing a potential grain export corridor from Ukraine and northern Syria, according to Turkey's defense ministry, while Russian Foreign Minister Sergei Lavrov is in Ankara for two days to discuss unblocking grain exports and the wider Ukraine conflict. READ MORE BELOW

• However, Turkish efforts to ease a global food crisis by negotiating safe passage for grain stuck in Black Sea ports has met resistance as Ukraine said Russia was imposing unreasonable conditions while Lavrov said no action was required from Moscow because it had already made the necessary commitments.

• The deputy head of Ukraine's agriculture producers union has accused Russia of stealing about 600,000 tonnes of grain from occupied Ukrainian territory and exporting some of it.

• Russian-backed separatists proxies in occupied parts of Ukraine's Zaporizhzhia province have announced plans to stage a referendum on joining Russia at an unspecified date later this year.

• Microsoft is making substantial cuts to its business in Russia, joining a string of companies that are reducing their activity or pulling out of the country following its actions in Ukraine.

• Russian lawmakers have finalized Moscow's exit from the jurisdiction of the European Court of Human Rights after the body that founded the court expelled Russia in March over its actions in Ukraine.

• The global economy risks falling into a harmful period of 1970s-style "stagflation" sparked by the Ukraine conflict, according to the World Bank, which has signed off on $1.49 billion of additional financing for Ukraine to help pay government and social workers' wages.

• Brad Pitt has accused his ex-wife Angelina Jolie of seeking to "inflict harm" on him by selling her 50 percent stake in their French vineyard to a Russian oligarch with "poisonous associations and intentions." 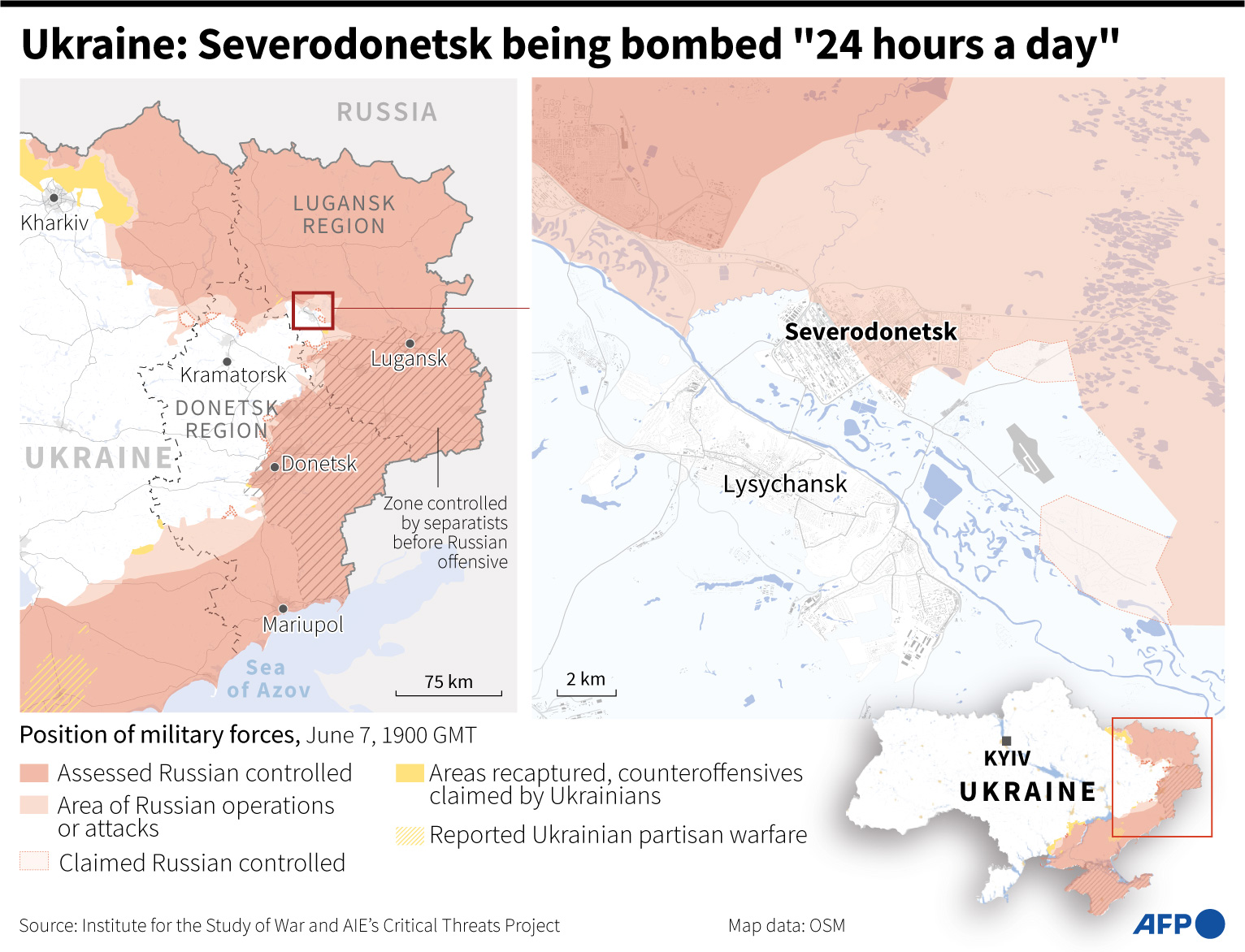 The fight for Sievierodonetsk

Ukrainian forces have pulled back to the outskirts of the industrial city of Sievierodonetsk amid a fierce Russian assault, the regional governor said, a decisive moment in one of the key battles of the conflict.

Russian forces have been focused for weeks now on seizing the industrial city of Sievierodonetsk, home to some 106,000 people before the conflict erupted, but the governor said Ukrainian forces would not surrender.

After claiming to have pushed Russian forces back and secured half of the city last week, the governor of the surrounding Luhansk region said on Wednesday afternoon that most of the city was again under Russian control.

"Our (forces) now again control only the outskirts of the city. But the fighting is still going on... it is impossible to say the Russians completely control the city," Serhiy Gaidai told the RBC-Ukraine media outlet.

He had said earlier in the day that Russian forces would increase their shelling and bombardment of both Sievierodonetsk and its smaller twin city of Lysychansk on the west bank of the Siverskyi Donets River.

Luhansk and the adjacent province of Donetsk form the Donbas, much of which has been claimed by Moscow for Russian-speaking separatists who have held eastern parts of the region since 2014.

"The absolutely heroic defense of Donbas is ongoing," Ukrainian President Volodymyr Zelenskyy said in a video statement on Tuesday.

"It is absolutely felt that the occupiers didn't believe the resistance of our military would be so strong and now they are trying to bring in new resources towards the Donbas," he said. 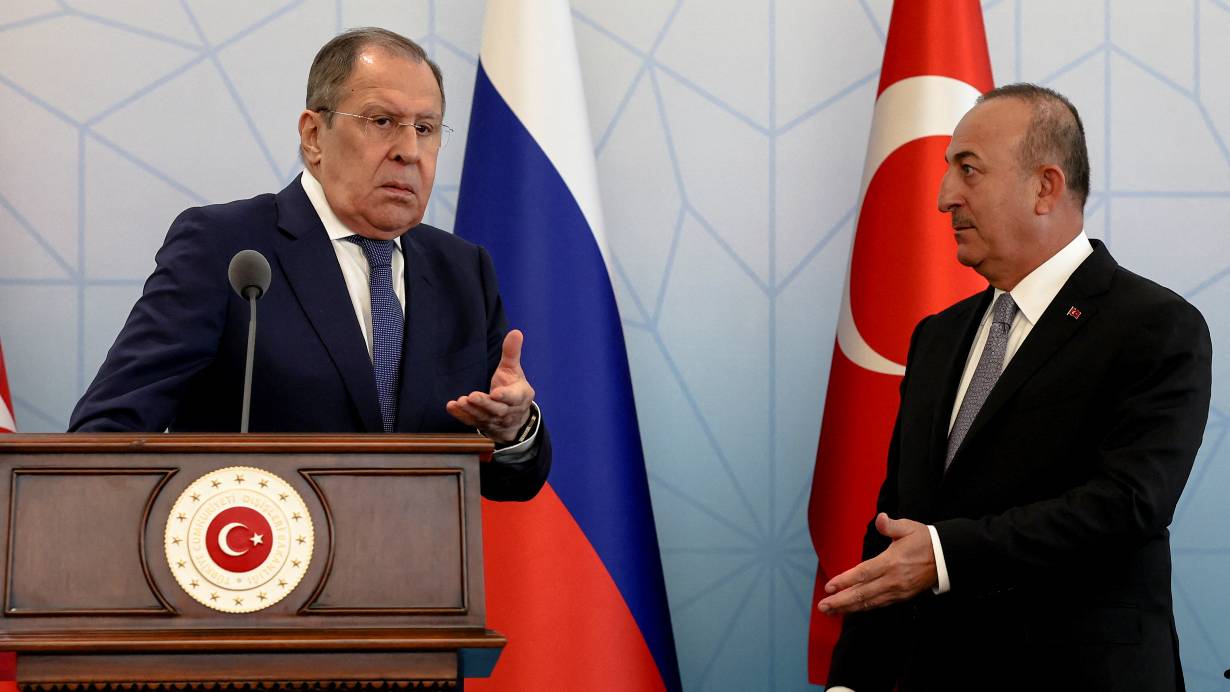 Turkey's foreign minister has said a UN plan to restart Ukrainian grain exports along a sea corridor was "reasonable" but required more talks with Moscow and Kyiv to ensure ships would be safe.

Speaking alongside Russian Foreign Minister Sergei Lavrov, who is on a two-day trip to Ankara, Turkey's Mevlut Cavusoglu said their meeting in Ankara was fruitful, with a suggestion of returning to peace talks for a possible ceasefire deal.

Russia's assault on Ukraine – one of the world's biggest grain exporters – has halted Kyiv's Black Sea grain shipments, threatening a global food crisis. The UN has appealed to both sides, as well as maritime neighbor and NATO member Turkey, to agree a corridor. 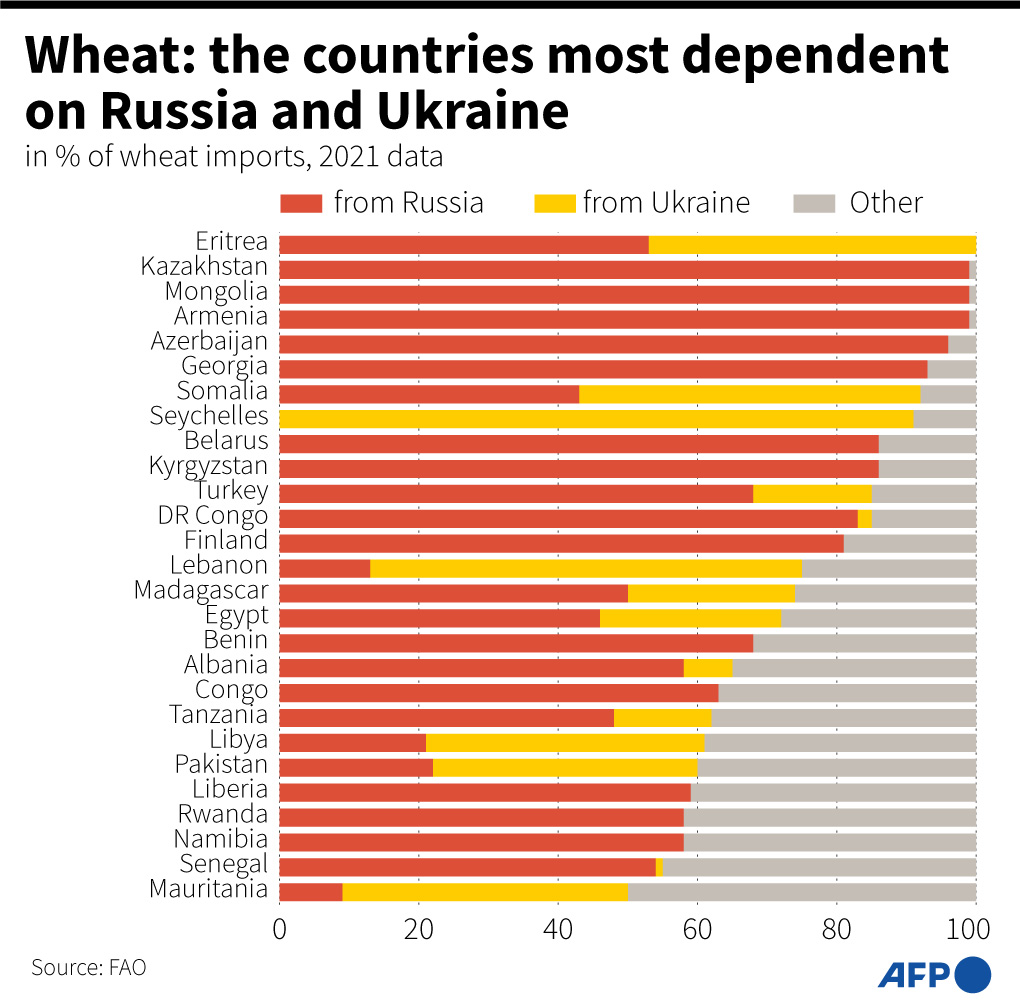 A deal might involve a Turkish naval escort for tankers leaving Ukrainian ports including Odesa, currently blockaded by Russia's navy – and onward to Turkish waters.

"Various ideas have been put out for the export of Ukrainian grains to the market and most recently is the UN plan (including) a mechanism that can be created between the U.N., Ukraine, Russia and Turkey," Cavusoglu said.

"We see it as reasonable," he added. "Of course both Ukraine and Russia must accept it."

Lavrov said Ukraine needed to allow merchant vessels to leave its ports safely for the deal to work, adding that the onus was on Ukraine to solve the problem of resuming grain shipments by de-mining its ports.

Lavrov said no action was required on the Russian side because it had already made the necessary commitments.

"We state daily that we're ready to guarantee the safety of vessels leaving Ukrainian ports and heading for the (Bosphorus) gulf, we're ready to do that in cooperation with our Turkish colleagues," he said after talks with his Turkish counterpart.

"To solve the problem, the only thing needed is for the Ukrainians to let vessels out of their ports, either by de-mining them or by marking out safe corridors, nothing more is required."

Grain silos in Ukraine's government-controlled territory are about half full in the run-up to this year's harvest, meaning crops could be left in the ground if Russia continues its port blockade, the head of the Ukraine Grain Association said on Wednesday.