It's been 100 days since Russia's President Vladimir Putin launched what he calls a "special military operation" on Ukraine.

In those weeks and months, several military objectives for Russia have fallen by the wayside in face of fierce Ukrainian resistance – which some reports indicate Russia was not expecting.

Perhaps most notably, apparent early Russian attempts to attack the capital Kyiv have notably lessened and Russian troops fell back to the Donbas region – where the majority of fighting is now taking place.

In all, 13 million people have been forced to leave their homes. Many thousands have been killed.

• Russian forces advanced deep into the ruined eastern factory city of Sievierodonetsk, but Ukrainian troops were still holding out there on Friday according to local reports.

• Senegal President Macky Sall, who is chairman of the African Union, said that Russian President Vladimir Putin had expressed a willingness to ease exports of Ukrainian cereals during a meeting in Sochi on Friday. READ MORE BELOW

• Ukraine's President Volodymyr Zelenskyy said Ukrainian forces had "some success" in Sievierodonetsk, but he added the general situation in Donestsk was unchanged.

• "Certain results have been achieved," Kremlin spokesman Dmitry Peskov told reporters when asked about the first 100 days of what Russia calls its "special military operation" in Ukraine.

• A French national was killed after volunteering as a combatant in eastern Ukraine alongside the country's army in the fight against Russia, a spokeswoman of the French foreign ministry confirmed on Friday.

• War crime prosecutors investigating cases in Ukraine are examining allegations of the forcible deportation of children to Russia during the conflict as they seek to build a genocide indictment, the country's top prosecutor said.

• Ukraine does not plan to use multiple-launch rocket systems it receives from the U.S. to attack facilities in Russia, a Ukrainian presidential adviser said.

• NATO should consider granting Ukraine "de facto" rather than "de jure" membership of the alliance when it discusses its strategy for the next 10 years at a summit in June, Ukrainian Defense Minister Oleksii Reznikov said.

• "The entire temporarily occupied territory of our state is now a complete disaster zone, for which Russia bears full responsibility," Zelenskyy said in an overnight address.

• Meanwhile, the UN is in talks with Russia about restoring its export market. A representative said more work was needed. 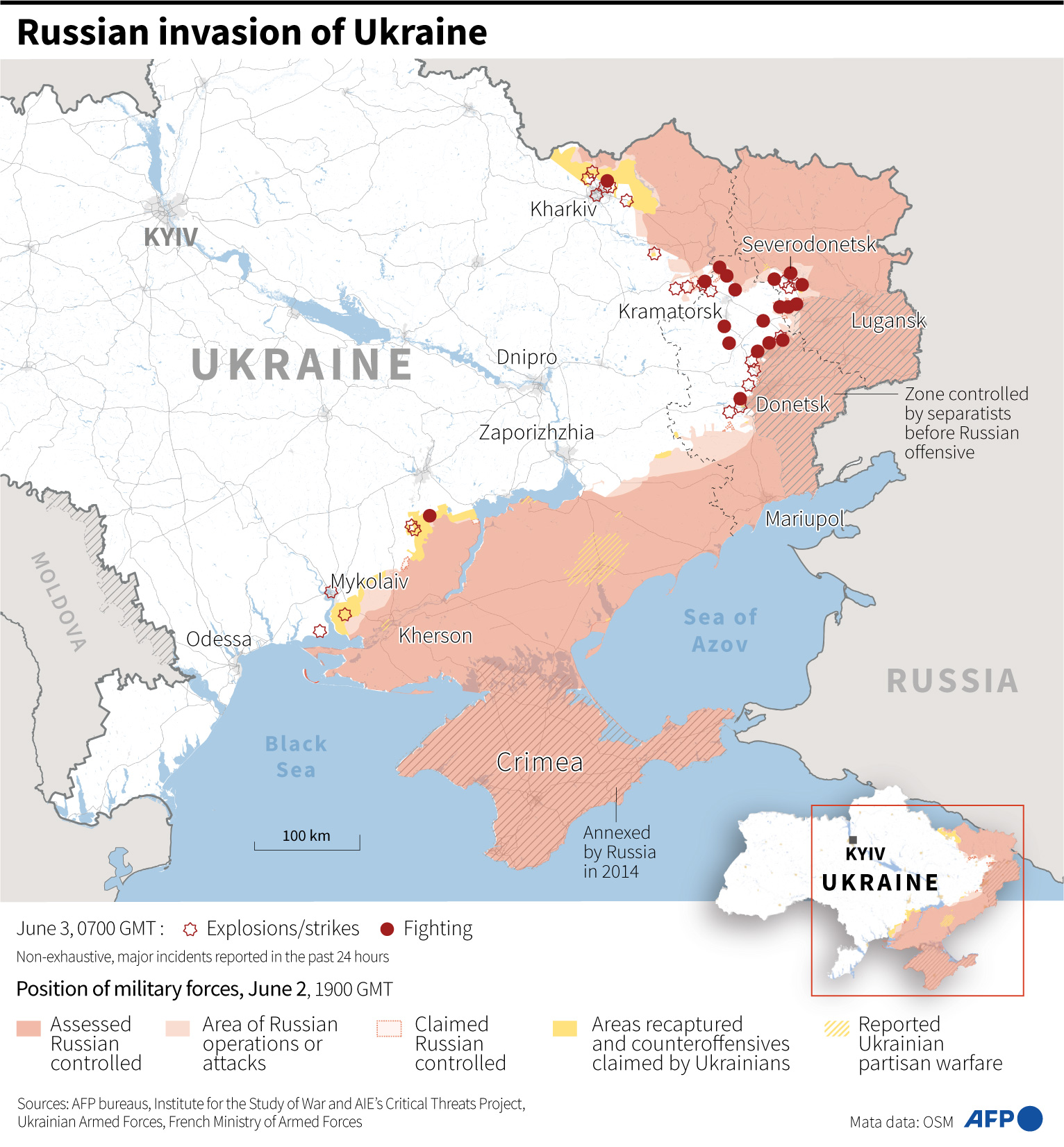 The latest available information on the Russian advance, according to AFP and the ISW.

The latest available information on the Russian advance, according to AFP and the ISW.

You may have heard a phrase similar to "Europe's breadbasket" used to describe Ukraine. It's a common way of describing the Ukrainian economy, which is agricultural in large parts.

It's also said with a sense of dread and foreboding – because the conflict with Russia has endangered much of the farming land in Eastern Ukraine used to grow crops. The effect of that has already been seen around the world, with price hikes at supermarkets and shortages of some grain-based produce.

So far the most common shortages are in vegetable oils, many of which use sunflower seed oil. In many countries shelves have been left empty, or price hikes have been passed on to consumers from businesses which have seen their cooking costs balloon.

So what's being done? Turkey is an important player, as it controls the Bosphorus strait, through which ships must pass to access the Black Sea – where Ukraine's major ports are located.

Today Russia's Foreign Minister Sergey Lavrov visits Turkey for talks, and it is hoped an agreement can be broached on lifting the Russian navy's blockade of these Ukrainian ports, to allow grain exports.

Another possible route for grain exports is north – via Belarus's railways to the Baltic sea ports in Latvia and Lithuania.

While Belarus's President Alexander Lukashenko raised this possibility, he demanded a lifting of sanctions on his country's exports in return. This is unlikely, but with concerns of food and resource shortages growing, it's possible such a plan might be accepted by the UN and international community. 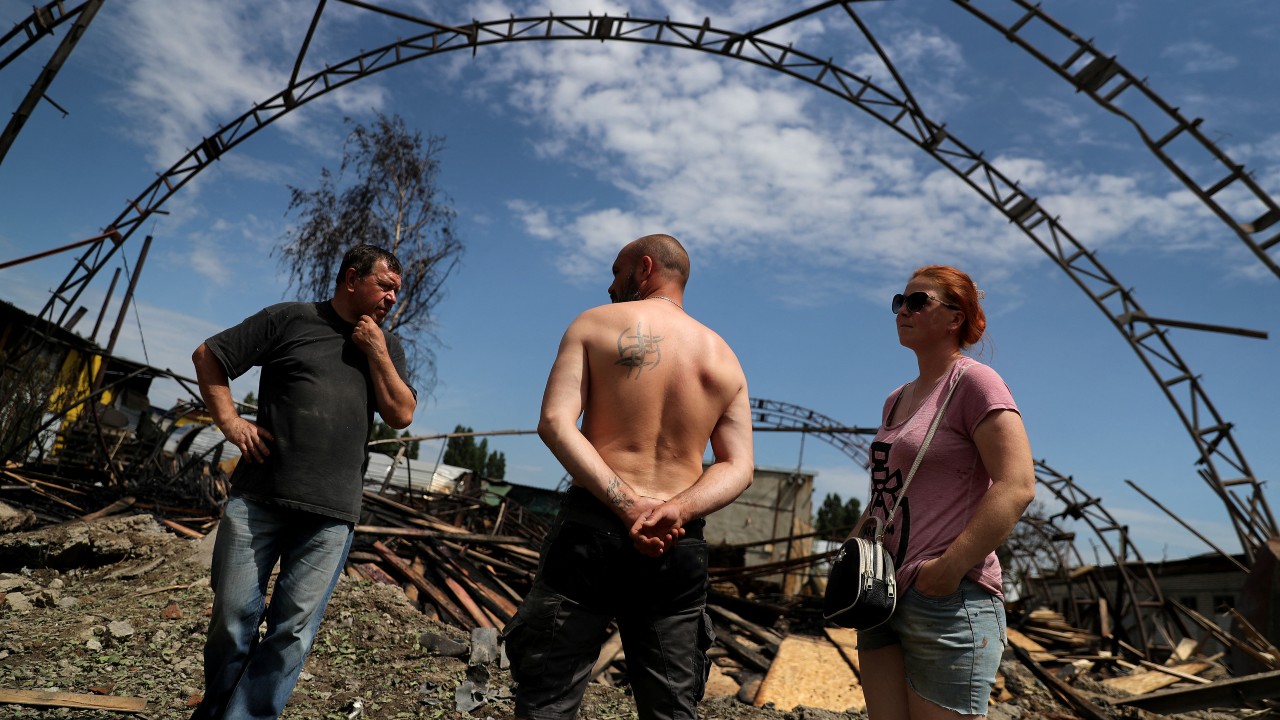 Workers inspect a damaged wood warehouse on the outskirts of Kharkiv on Friday. /Ivan Alvarado/Reaters

Workers inspect a damaged wood warehouse on the outskirts of Kharkiv on Friday. /Ivan Alvarado/Reaters

Senegal's President Macky Sall said Russia's Vladimir Putin had told him on Friday he was ready to enable the export of Ukrainian grain to ease a global food crisis that is hitting Africa especially hard.

"President Putin has expressed to us his willingness to facilitate the export of Ukrainian cereals," Sall wrote on Twitter after meeting Putin in his role as chairman of the African Union.

Russia was also ready to ensure the export of its own wheat and fertiliser, Sall said after the talks in the Russian Black Sea resort of Sochi on day 100 of Putin's 'military operation' in Ukraine.

Sall did not say if Putin had attached any conditions to his offer. Russia has previously said it is ready to allow vessels carrying food to leave Ukraine in return for the lifting of some Western sanctions against it, a proposal that Ukraine has described as "blackmail".

Africa is heavily dependent on grain supplies from Russia and Ukraine that have been badly disrupted by the war.

"I have come to see you, to ask you to be aware that our countries, even far from the theater (of war), are the victims of this economic crisis," Sall told Putin earlier.

In remarks that were carried on Russian state television, he said most African countries had avoided condemning Russia's actions in Ukraine at votes in the United Nations.