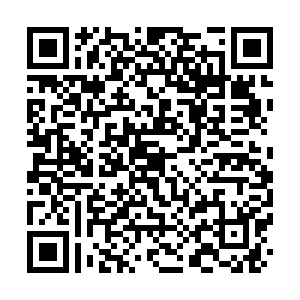 A view of a plant of Azovstal iron and steel works damaged during showers of brightly-burning munitions in Mariupol, in this undated still image obtained from a handout video released. /Reuters

A view of a plant of Azovstal iron and steel works damaged during showers of brightly-burning munitions in Mariupol, in this undated still image obtained from a handout video released. /Reuters

• Sweden's ruling Social Democrats said on Sunday they backed the country joining NATO, abandoning decades of opposition in the wake of Russia's offensive in Ukraine and creating a large parliament majority in favor of membership.

• Finland will apply for NATO membership, the Nordic country's president and prime minister announced earlier on Sunday, a direct result of Russia's offensive in Ukraine. "This is a historic day. A new era is opening", President Sauli Niinisto and premier Sanna Marin said.

• NATO countries are ready to provide military assistance to Ukraine to help it repel Russia's offensive for as long as it is needed, German Foreign Minister Annalena Baerbock said on Sunday.

• Russia's offensive in Ukraine is failing and its operation in the Donbas region has stalled, NATO's secretary general said on Sunday. "Russia's war in Ukraine is not going as Moscow had planned. They failed to take Kyiv," Jens Stoltenberg told reporters by video link. "They are pulling back from Kharkiv and their major offensive in Donbas has stalled."

• A Ukrainian counteroffensive was underway near the Russian-held town of Izium, but its military said Russian forces were advancing elsewhere in the key Donbas region, Ukraine said.

• White brightly-burning munitions were shown cascading down on the Azovstal steel works in Mariupol in a video posted by a pro-Russian separatist commander on Sunday. The Ukrainian military said there was no let-up in Russia's bombardment of the steel works in the southern port, where a few hundred Ukrainian fighters are holding out weeks after the city fell into Russian hands. 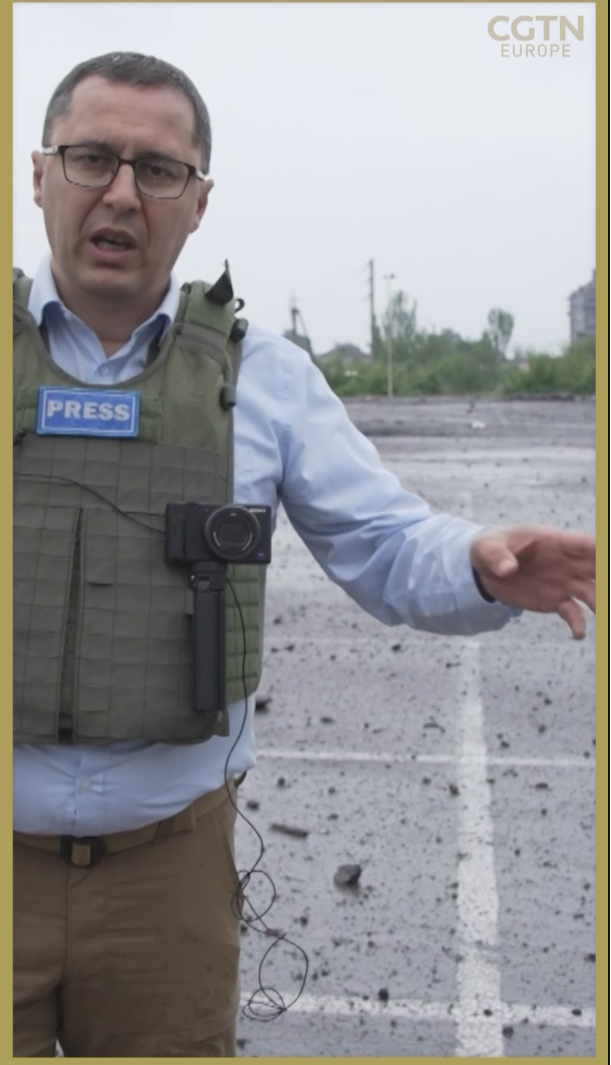 • Ukrainian Foreign Minister Dmytro Kuleba said he met U.S. Secretary of State Antony Blinken in Berlin on Sunday and that "more weapons and other aid is on the way to Ukraine."

• Russia's behavior amounts to the unilateral repudiation of a 1997 cooperation agreement with NATO, Germany's Foreign Minister Annalena Baerbock said on Sunday. "The Russian government has made it clear that the NATO-Russia Founding Act is no longer worth anything to it. So we now have to acknowledge that this basic act was also unilaterally terminated by Russia, not by NATO," Baerbock told reporters at the end of a NATO foreign ministers meeting.

• Ukraine has deployed many of its new U.S. M-777 howitzers at the front lines and Washington has delivered all but one of the 90 artillery pieces they were due to send, the U.S. embassy in Kyiv said.

• Russia said it had pounded Ukrainian positions in the east with missiles, targeting command centres and arsenals as its forces seek to encircle Ukrainian army units in the battle for Donbas.

• Proud Ukrainians celebrated their Eurovision song contest victory on Sunday, renaming a train route in its honor as they hoped for victory in their grinding conflict with Russia. Ukraine's Kalush Orchestra triumphed in Italy on Saturday with their entry 'Stefania,' a song fusing rap with traditional folk music that was a tribute to band frontman Oleh Psiuk's mother.

• Ukraine's win at the Eurovision Song Contest showed the immense public support for the country in its battle against Russia, NATO's deputy secretary-general Mircea Geoana said on Sunday. 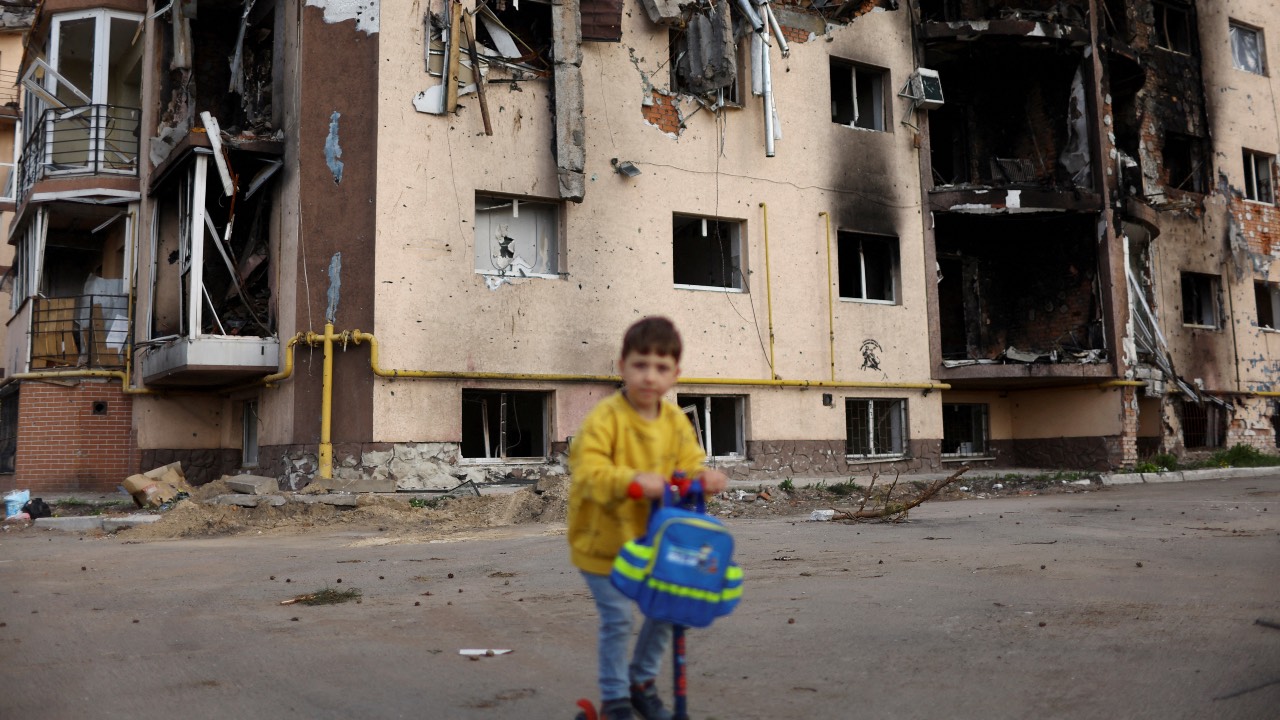 A Ukrainian boy rides on a scooter, in a residential neighbourhood damaged by Russian shelling in Irpin. /Ahmed Jadallah/Reuters

A Ukrainian boy rides on a scooter, in a residential neighbourhood damaged by Russian shelling in Irpin. /Ahmed Jadallah/Reuters

White brightly burning munitions were shown cascading down on the Azovstal steel works in Mariupol in what a British military expert said looked like either an attack with phosphorus or incendiary weapons.

Reuters news agency was not able to immediately identify the type of munitions being used or when the video was taken. It was posted on Sunday on the Telegram messaging application by Alexander Khodakovsky, a commander of the pro-Russian self-proclaimed republic of Donetsk.

"If you didn't know what it is and for what purpose - you could say that it's even beautiful," Khodakovsky said in a message with the video. Khodakovsky could not be immediately reached for comment.

It was not immediately clear which forces had fired the munitions, or from where.

Russian forces have been attacking Mariupol for nearly two months, but some Ukrainian fighters remain holed up in the vast Soviet-era plant founded under Josef Stalin and designed with a labyrinth of bunkers and tunnels to withstand attack.

Russia has not commented on what specific weapons it has used to attack the plant. The Russian defense ministry did not reply to a written request for comment about the video.

White phosphorus munitions can be used on battlefields to make smoke screens, generate illumination, mark targets or burn bunkers and buildings. White phosphorus is not banned as a chemical weapon under international conventions.

Petro Andryushchenko, an aide to Mariupol's mayor, said that Russia had used incendiary or phosphorous bombs on Azovstal. Andryushchenko was speaking from Ukrainian-controlled territory. Reuters was unable to immediately verify his comments.

Hamish Stephen de Bretton-Gordon, a former commanding officer of Britain's Joint Chemical, Biological, Radiological and Nuclear Regiment, said it looked very much like phosphorus in the video, but only a sample could give absolute confirmation.

"It does look very much like white phosphorus rockets or artillery shells which are exploding just above the ground or upon the ground," he told Reuters.

"It could possibly be Russian incendiary rockets as well but I have certainly seen a lot of white phosphorus in particularly Syria and it looks very much like that to me," he said.

While some Ukrainian fighters are still in bunkers at the steel plant, civilians have been evacuated. 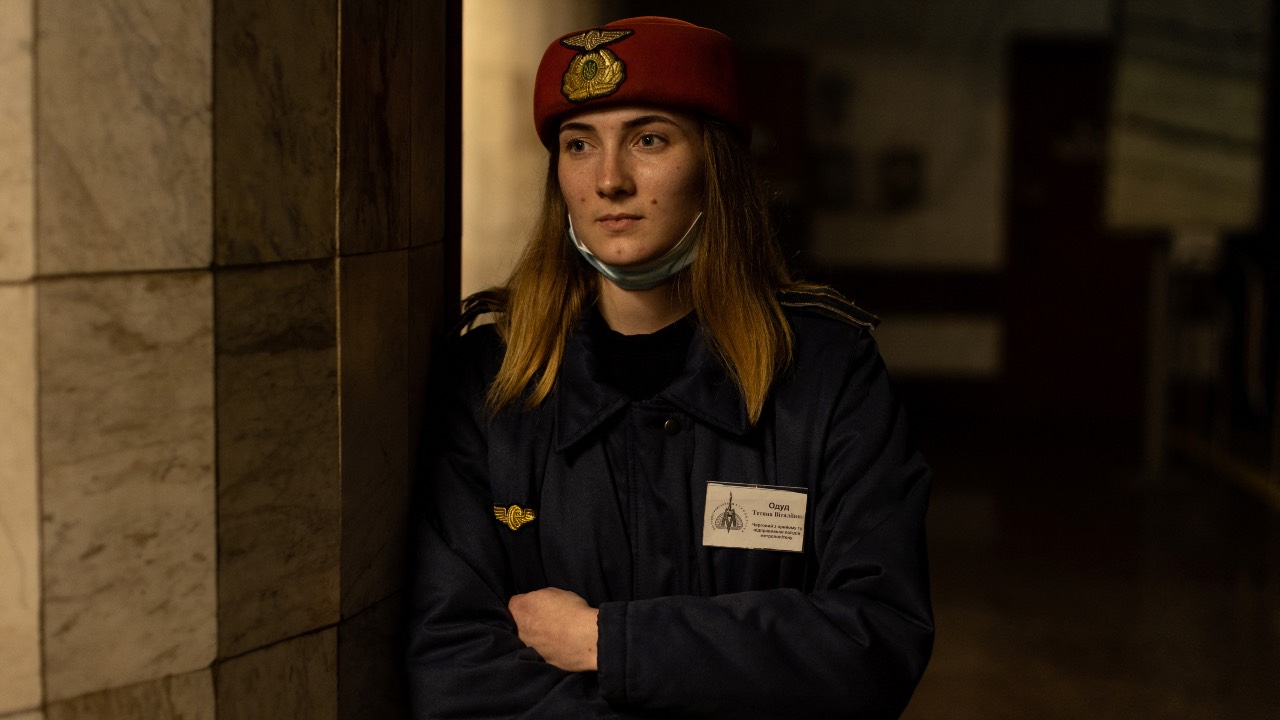 A metro officer stands during a cultural event in support of Ukraine organized inside a metro station in Dnipro. /Jorge Silva/Reuters

A metro officer stands during a cultural event in support of Ukraine organized inside a metro station in Dnipro. /Jorge Silva/Reuters

Russia unlikely to dramatically accelerate its rate of advance in Donbas

Russia has probably lost around a third of the ground forces it deployed to Ukraine and its offensive in the Donbas region "has lost momentum and fallen significantly behind schedule," British military intelligence said on Sunday.

"Despite small-scale initial advances, Russia has failed to achieve substantial territorial gains over the past month whilst sustaining consistently high levels of attrition," the British defense ministry said on Twitter.

"Russia has now likely suffered losses of one third of the ground combat force it committed in February."

It said Russia was unlikely to dramatically accelerate its rate of advance over the next 30 days.

Since Russia began its military offensive on February 24, Ukraine's military has forced Russia's commanders to abandon an advance on the capital Kyiv, before making rapid gains in the northeast and driving them away from the second largest city of Kharkiv.

A Ukrainian counteroffensive has been under way near the Russian-held town of Izium, though Ukraine's military reported on Sunday that Russian forces were advancing elsewhere in the Donbas region, the main theatre of war over the past month.