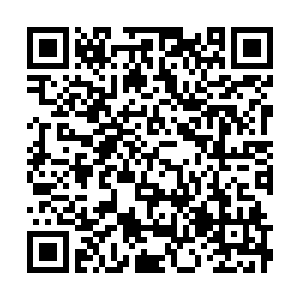 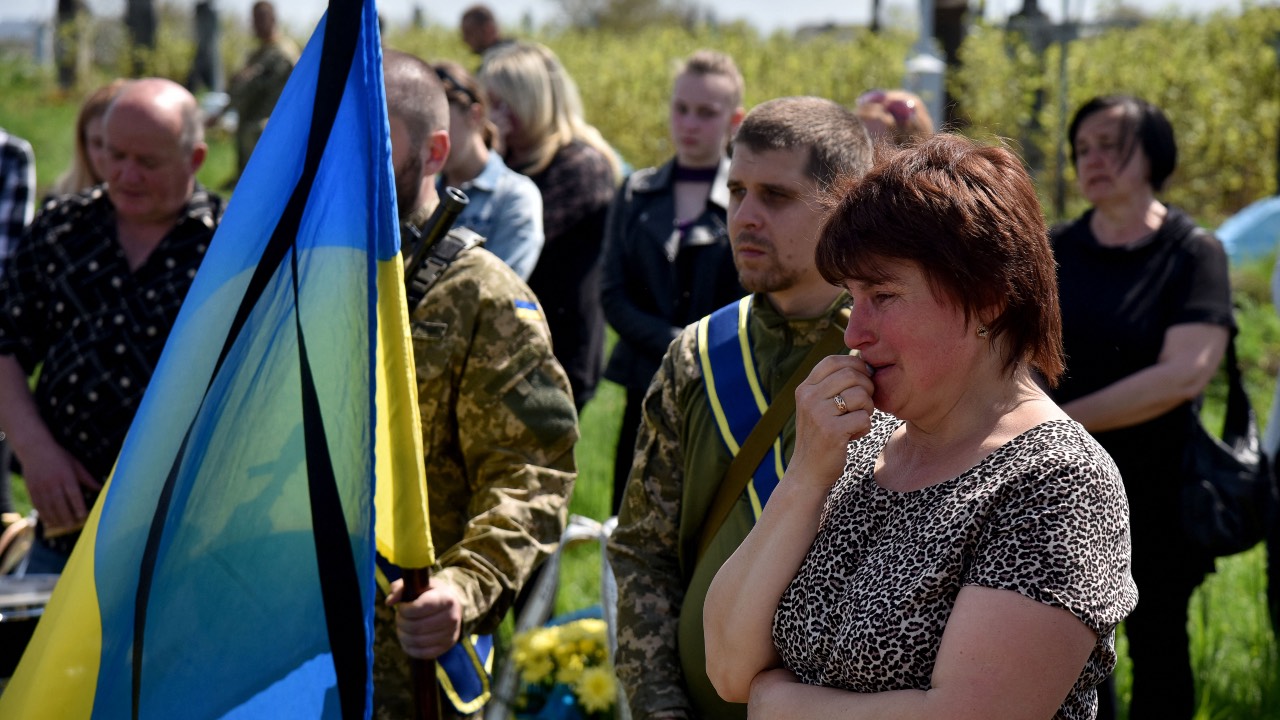 A woman reacts during the funeral of a senior soldier who was killed in Donetsk region in the village of Kulchytsi, Lviv region. /Pavlo Palamarchuk/Reuters

A woman reacts during the funeral of a senior soldier who was killed in Donetsk region in the village of Kulchytsi, Lviv region. /Pavlo Palamarchuk/Reuters

• Ukraine can expect to feel the aftermath of Russia's offensive "for 100 years" because of unexploded ordnance littering cities, German Chancellor Olaf Scholz said Wednesday, adding that allies would help the country rebuild.

• Both Russia and Ukraine have reported renewed fighting around Snake Island. Some defense officials believe it may become a battle for control of the western Black Sea coast.

• Ukrainian officials issued dire warnings about the fate of civilians and the last fighters in Mariupol after weeks of Russian bombardment which the city's mayor said had turned it into a "medieval ghetto".

• U.N. Secretary-General Antonio Guterres said he was deeply concerned about hunger becoming widespread as the conflict in Ukraine threatened food security in different parts of the world.

• Russian Foreign Minister Sergei Lavrov said on Wednesday that Moscow did not want war in Europe, but that Western countries were keen to see Russia defeated in its military campaign in Ukraine.

• The Russian-occupied region of Kherson in Ukraine plans to ask President Vladimir Putin to incorporate it into Russia, TASS news agency reported on Wednesday, citing an official from the Russian-controlled administration there.

• A top European official has backed a multi-trillion-euro 'Marshall'-style plan to rebuild Ukraine, pledging the firepower of the EU's lending arm for what he said must be a global rescue effort.

• Thousands more civilians have been killed in Ukraine than the official toll of 3,381 and more than 8 million internally displaced, the head of the United Nations' Human Rights Monitoring Mission said.

• Thirty percent of jobs in Ukraine, 4.8 million in total, have been lost since the conflict started, the United Nations says.

• Remittances to Ukraine are expected to jump more than 20 percent in 2022, according to a World Bank  report.

• Hungary upped the stakes in talks about EU oil sanctions, saying a deal was out of reach until Brussels offers a "solution" measured in hundreds of millions of dollars to replace Russian oil in the Hungarian economy. 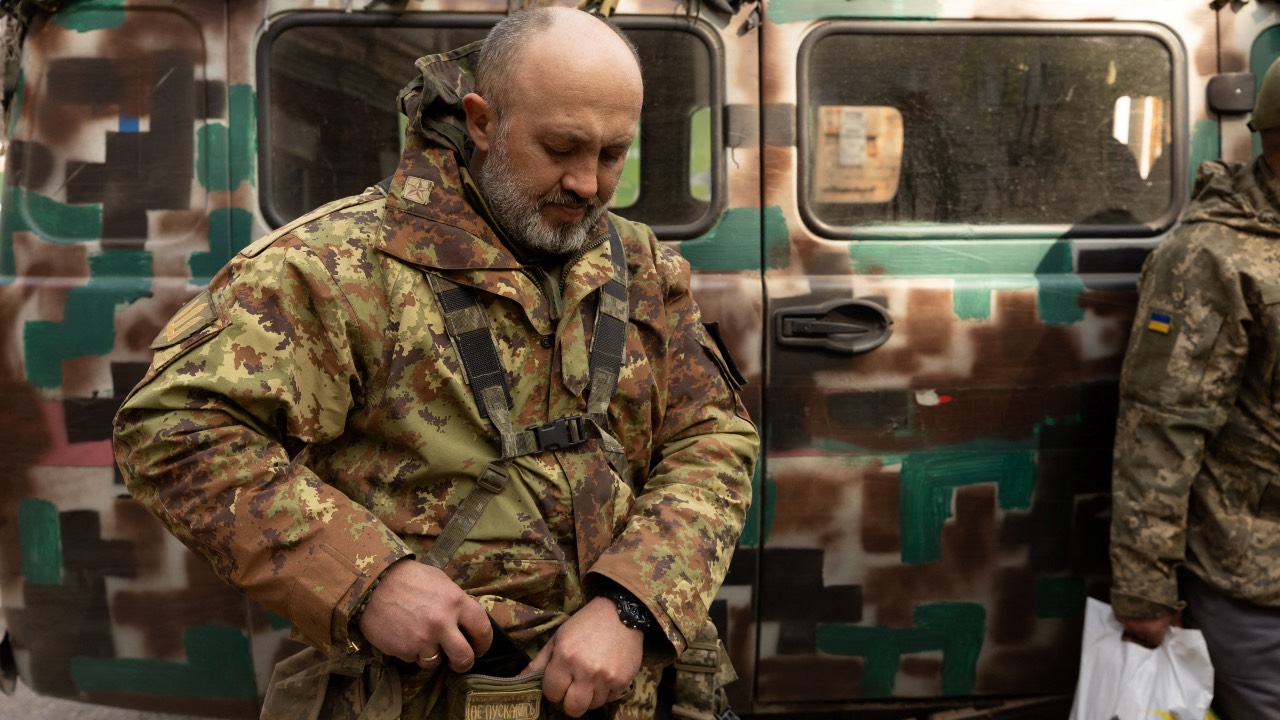 Ukraine's forces are struggling to hold on in the Donbas region, but have been boosted by what Kyiv says is the recapture of four villages around Kharkiv further north. /Jorge Silva/Reuters

Ukraine's forces are struggling to hold on in the Donbas region, but have been boosted by what Kyiv says is the recapture of four villages around Kharkiv further north. /Jorge Silva/Reuters

• The head of Ukraine's state gas company said he could not confirm an assertion by Russia's Gazprom that it is not technically possible to switch gas transfers to Ukraine to a new entry point.

• Romanian senators passed a bill the government hopes will encourage gas extraction in the Black Sea as the European Union looks to reduce its dependency on Russian gas.

• The price of the benchmark U.S. oil contract WTI surged past $105 per barrel on Wednesday on concerns over Russia's offensive in Ukraine, China's COVID-19 lockdown and slowing U.S. inflation.

• The Czech president approved a request to allow 103 citizens to fight in Ukraine alongside the army, after the leader reversed his pro-Russia stance on Moscow's offensive.

• Car cable production at Leoni's factories in Ukraine is almost back to normal, the German supplier said on Wednesday, after production stoppages caused by the conflict rattled the auto industry.

• The deployment of unprecedented sanctions against Russia has left companies with a complex legal minefield to navigate, prompting them to hire more lawyers to avoid costly missteps.

• British Prime Minister Boris Johnson and his Swedish counterpart Magdalena Andersson announced a mutual defense agreement in case of an attack, as Sweden considers whether to join NATO.  A similar agreement was announced with Finland after Johnson met Finnish president Sauli Niinisto.

• A group of Ukrainian soldiers' wives met Pope Francis at the Vatican, asking him to intervene to "save the lives" of their loved ones battling Russian forces at the besieged Azovstal steel plant in Mariupol.

• Russia has demanded a formal apology from Poland and threatened possible future reprisals for a protest in which Moscow's ambassador to Warsaw was doused with red paint.

• Russia's Deputy Foreign Minister Sergei Ryabkov and Washington's ambassador, John Sullivan, met in Moscow on Wednesday. The U.S. embassy said that "the United States remains committed to open channels of communication with the Russian government, both to advance U.S. interests and to reduce the risk of miscalculation between our countries".

• New car sales in Russia sank by over 78 percent in April, industry data showed on Wednesday, after the country was hit by a barrage of sanctions over Moscow's military campaign in Ukraine.

• A Russian spy chief compared the U.S. State Department to the World War II Nazi propaganda machine constructed by Joseph Goebbels, saying Washington had launched an anti-Russia messaging campaign across social media, but he failed to give any evidence to support his claim. 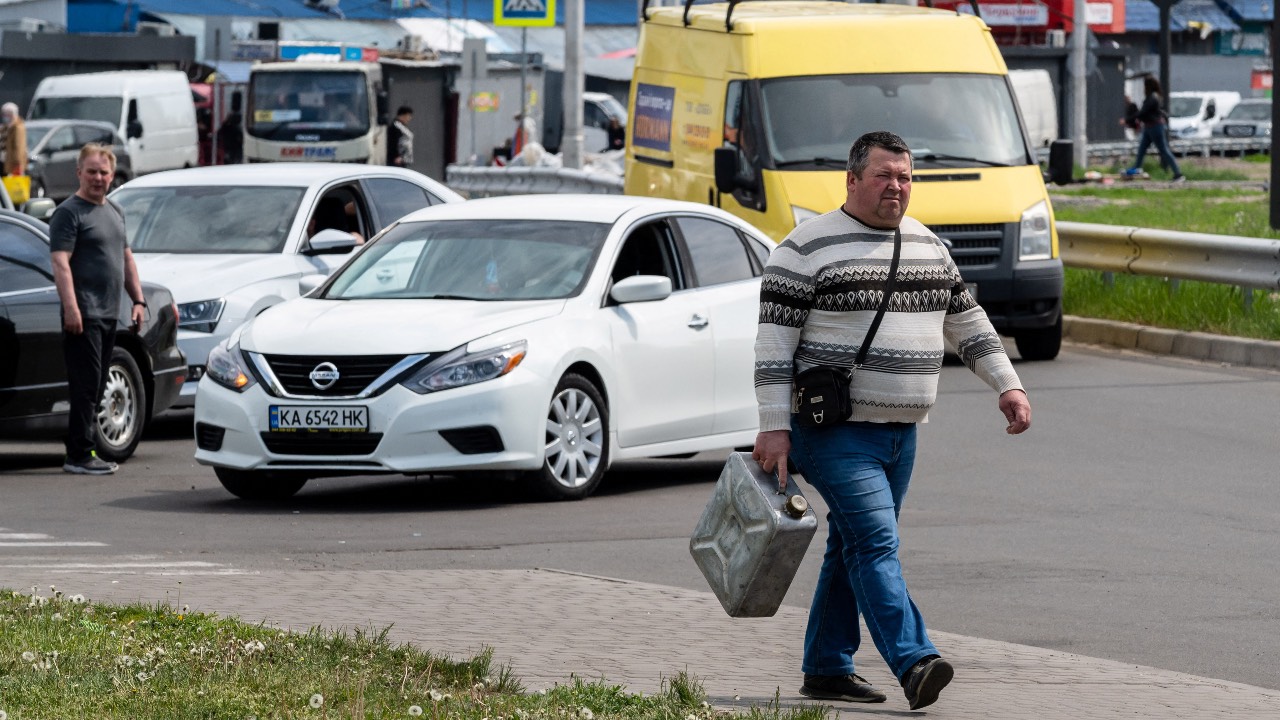 A man with a jerry can walks next to a petrol station in Kyiv as drivers stay in line trying to buy fuel, amid Russia's offensive in Ukraine. /Viacheslav Ratynskyi/Reuters

A man with a jerry can walks next to a petrol station in Kyiv as drivers stay in line trying to buy fuel, amid Russia's offensive in Ukraine. /Viacheslav Ratynskyi/Reuters

Thirty percent of jobs in Ukraine, 4.8 million in total, have been lost since the start of the conflict, the United Nations said on Wednesday, with the outlook even worse if it drags on.

In its first report on the consequences of Russia's offensive in Ukraine, not only for the two countries but for central Asia and the rest of the world, the ILO laid out several scenarios, depending on how the conflict develops.

"If hostilities ceased immediately, a rapid recovery could ensue, with the return of 3.4 million jobs, thus reducing employment losses to 8.9 percent," the agency said.

"In a scenario of further military escalation, employment losses would increase further to reach seven million, or 43.5 percent," it added.

"The Ukrainian government is fully operational as well as the employers and the workers' organizations," Heinz Koller, the ILO's Europe and Central Asia regional director, told a press conference.

"We continue to support them in order to be ready to assist them in the current situation, but hopefully also in the reconstruction phase after this conflict is over." 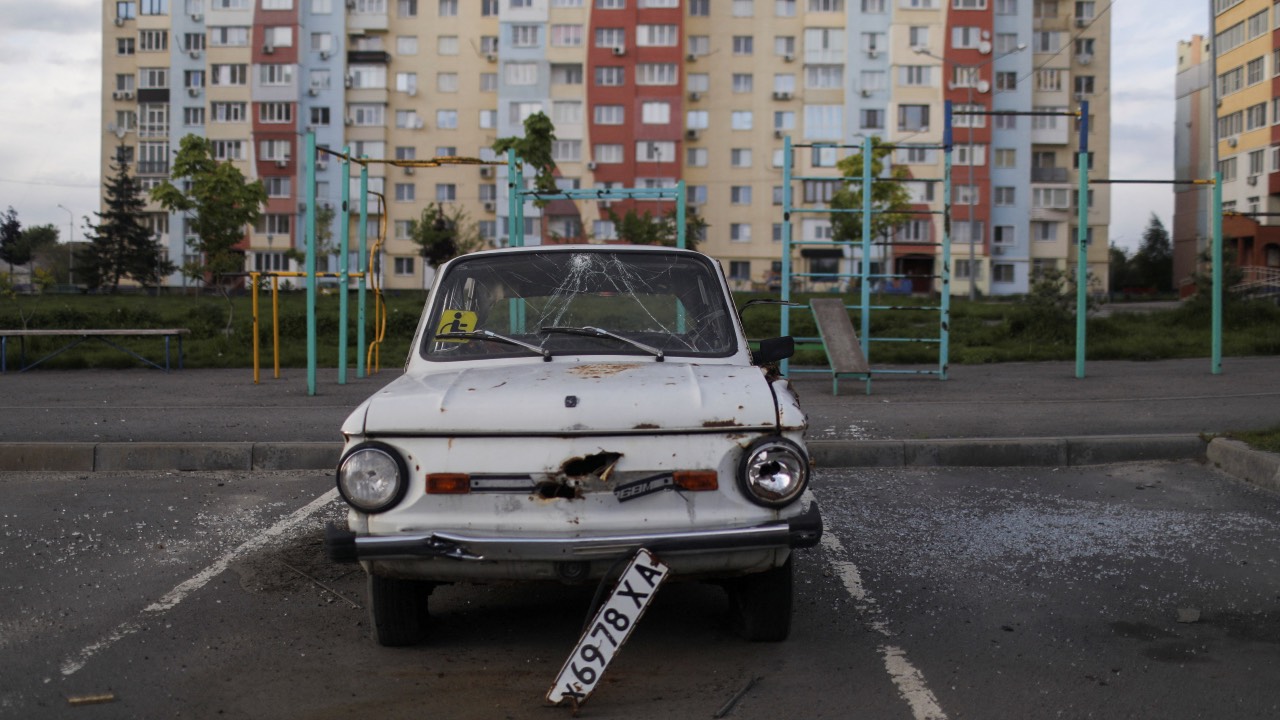 A damaged car is pictured in Saltivka neighborhood in Kharkiv, Ukraine. /Ricardo Moraes/Reuters

A damaged car is pictured in Saltivka neighborhood in Kharkiv, Ukraine. /Ricardo Moraes/Reuters

Ukraine said Wednesday it was pushing Russian troops away from the country's second biggest city Kharkiv but facing stiff resistance, as Washington predicted that Vladimir Putin was ready for a long war.

With President Joe Biden warning that Ukraine would within days likely run out of funds to keep fighting, the U.S. House of Representatives voted late on Tuesday to send a $40 billion aid package to the country.

Russia has focused on eastern Ukraine after failing to take Kyiv. Ukraine's forces are struggling to hold on in the Donbas region, but have been boosted by what Kyiv says is the recapture of four villages around Kharkiv further north.

President Volodymyr Zelenskyy said in his nightly address on Tuesday that he had "good news" from Kharkiv.

"The occupiers are gradually being pushed away," he said. "I am grateful to all our defenders who are holding the line and demonstrating truly superhuman strength to drive out the army of invaders."

Ukraine's general staff of the armed forces said on Facebook on Wednesday that "occupiers continue to focus their efforts on preventing the further advance of our troops towards the state border of Ukraine" from Kharkiv.

The head of the Kharkiv regional state administration Oleg Synegubov said four villages -- Cherkasy Tyshky, Rusky Tyshky, Rubizhne and Bayrak -- around the city had been liberated, but that "fierce battles" were still raging.

Despite the apparent gains, Zelenskyy urged Ukrainians against "moral pressure, when certain victories are expected weekly and even daily", a reflection of the grinding war that is now deep into its third month.

A stark example of that could be seen in the Kharkiv region itself, where Synegubov announced that 44 civilian bodies had been found under the rubble of a destroyed building in the eastern town of Izyum, now under Russian control.