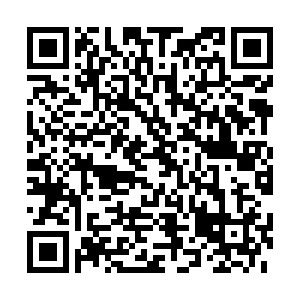 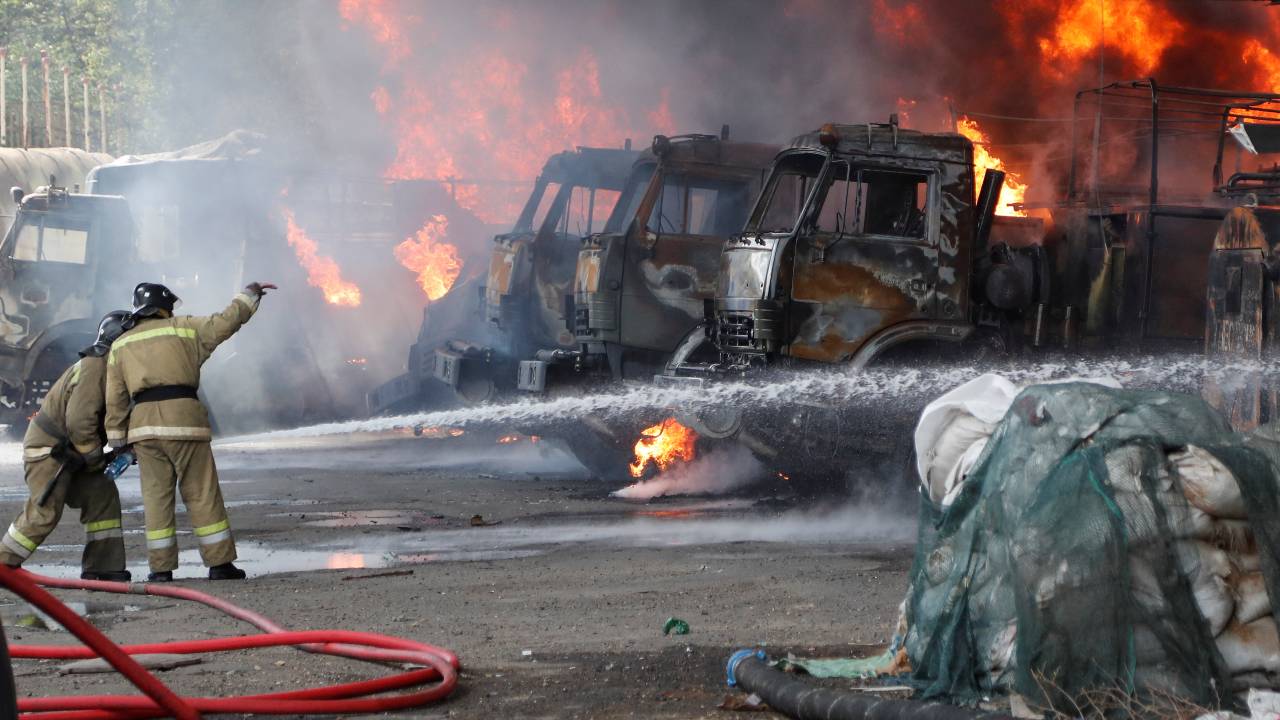 Emergency services try to extinguish a fire at an oil storage on the outskirts of Donetsk. /Alexander Ermochenko/Reuters

Emergency services try to extinguish a fire at an oil storage on the outskirts of Donetsk. /Alexander Ermochenko/Reuters

• European Union chief Ursula von der Leyen has proposed plans for a phased embargo on Russian oil, as well as sanctions on its top bank and banning Russian broadcasters from European airwaves. The package, which needs unanimous approval from European Union (EU) countries, would slowly bring in a ban on imports over a six-to-eight-month period. However, many member states remain sceptical, while Hungary and Slovakia - both highly reliant on Moscow's supplies - would be allowed to take a few months longer.

• Russia has deployed more than 20 battalion tactical groups near Ukraine's eastern city of Izium, in what Britain has claimed to be an effort to capture the cities of Kramatorsk and Severodonetsk in the Donbas region. Ukraine's defence ministry said on Wednesday that Russia was attempting to increase the tempo of its offensive in Ukraine's east.

• The EU has reportedly proposed freezing the assets of Patriarch Kirill, head of the Russian Orthodox Church, adding him to a draft list of hundreds of Russian accused of supporting Moscow's actions in Ukraine.

• More than 150 people have been evacuated from Mariupol, Ukrainian President Volodymyr Zelenkskyy said in a daily address, and arrived in the Ukrainian-held city of Zaporizhzhia. Zelenkskyy said that many of them had been living in air-raid shelters for more than two months.

• U.S. President Joe Biden says he will speak with other G7 leaders this week about potential additional sanctions against Russia. "We're always open to additional sanctions," Biden told reporters, when asked about U.S. plans after the EU announced its own. 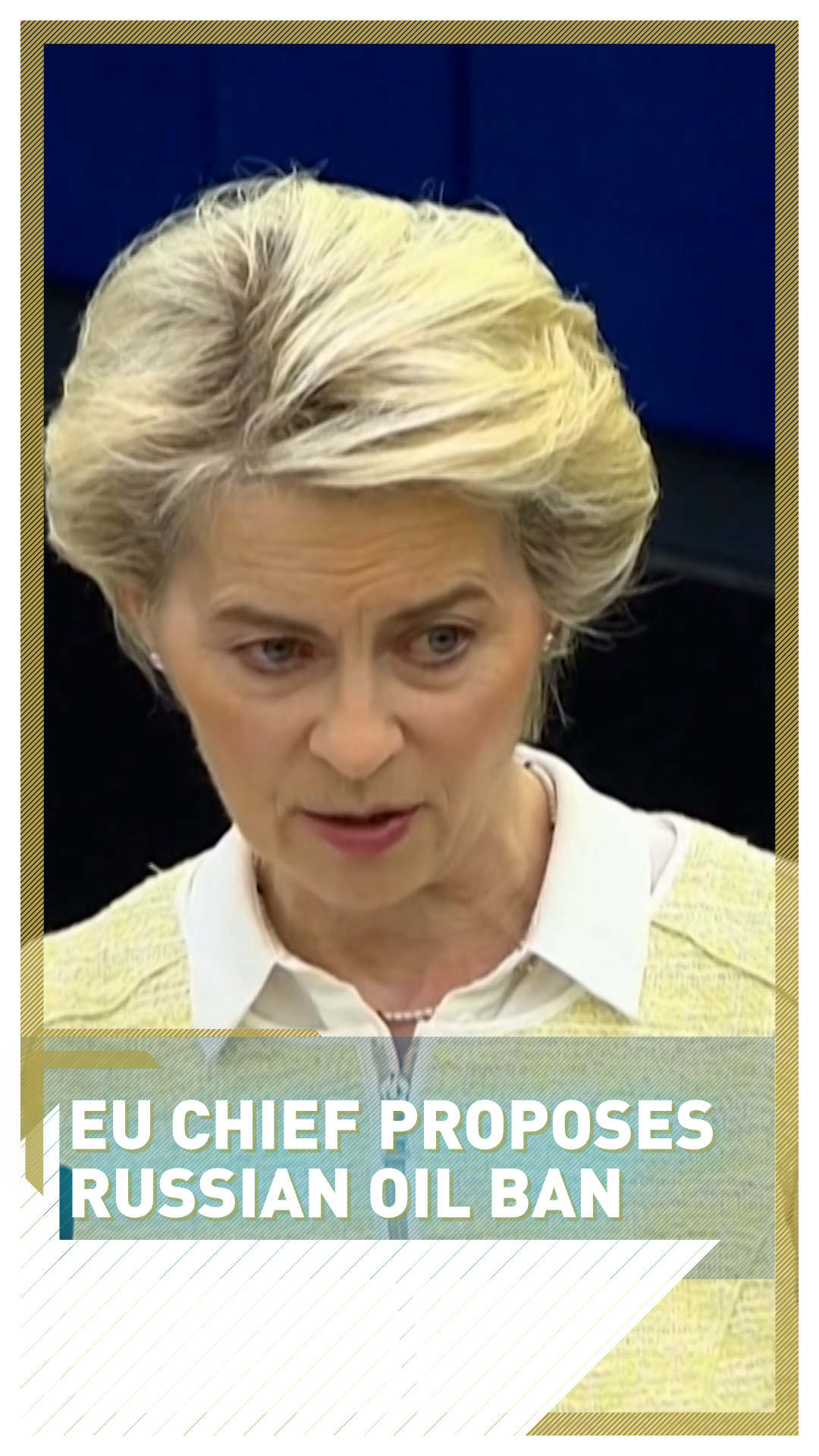 • Russian President Vladimir Putin has told his French counterpart Emmanuel Macron that the West must stop supplying weapons to Ukraine. Accusing Ukrainian forces of committing war crimes, Putin told Macron "the West could help stop these atrocities by putting relevant pressure on the Kyiv authorities, as well as halting the supply of weapons to Ukraine."

• British Prime Minister Boris Johnson has announced another $376 million in UK military aid for Ukraine, saying its resistance to Russia had shown Ukraine in its "finest hour." In a video address to Ukraine's parliament, the first by a foreign leader since the conflict's start on February 24, Johnson said the Ukrainians were fighting "with the energy and courage of lions."

• Chancellor Olaf Scholz urged Ukraine to help ease an embarrassing diplomatic blockage, after the German president was stopped from visiting Kyiv due to his past support of rapprochement with Russia. Ukraine's ambassador to Germany called Scholz an "offended liver sausage" for refusing to visit the country before President Frank-Walter Steinmeier is welcomed. "It is a problem for the German government and for the German people that the president was asked not to come," Scholz said. However, he added that "Ukraine must also play its part."

• Russia's foreign ministry has announced sanctions against 63 Japanese officials, journalists and professors for engaging in what it called "unacceptable rhetoric" against Moscow.

• Russia's top general, Valery Gerasimov, visited the frontline of combat in Donbas last week, a Pentagon official says, but reports that he was injured in a Ukrainian attack could not be confirmed.

• Russian clubs have been banned from participating in the Champions League and all other European competitions next season by Europe's football's governing body UEFA. 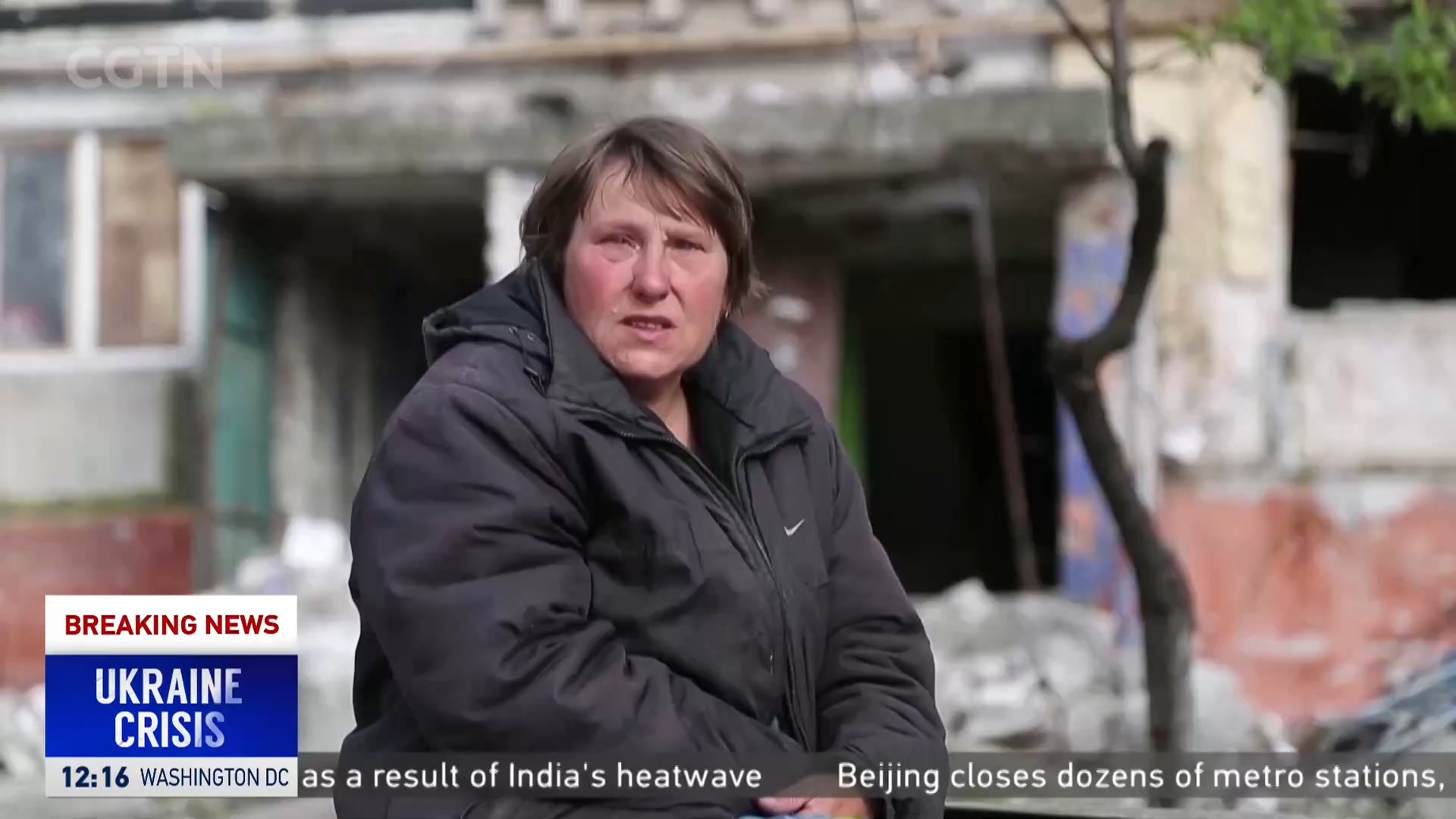 Russian oil embargo: the EU 'simply has to do it'

The EU's executive has proposed a progressive oil embargo on Russia, as well as new financial and media sanctions, in its toughest measures yet to punish Moscow for its actions in Ukraine.

The plan, if agreed by EU governments, would be a pivotal moment for the trading bloc, with many member states still reliant on Russian energy. However, EU chief Ursula von der Leyen said Moscow must face the consequences of their actions.

"Putin must pay a price, a high price, for his brutal aggression," the European Commission president told the European Parliament in Strasbourg.

"Today, we will propose to ban all Russian oil from Europe," she said to applause in the chamber.

The Commission's measures include phasing out supplies of Russian crude oil within six months and refined products by the end of 2022. Von der Leyen stressed that she would try to minimise the impact on European economies.

The price of Brent crude LCOc1 rose around 3 percent to more than $108 a barrel in early trade.

If agreed, the embargo would follow the U.S. and Britain, who are less reliant on Russian fuel and have already imposed bans.

"We are addressing our dependency on Russian oil. And let's be clear, it will not be easy because some member states are strongly dependent on Russian oil, but we simply have to do it," she said. 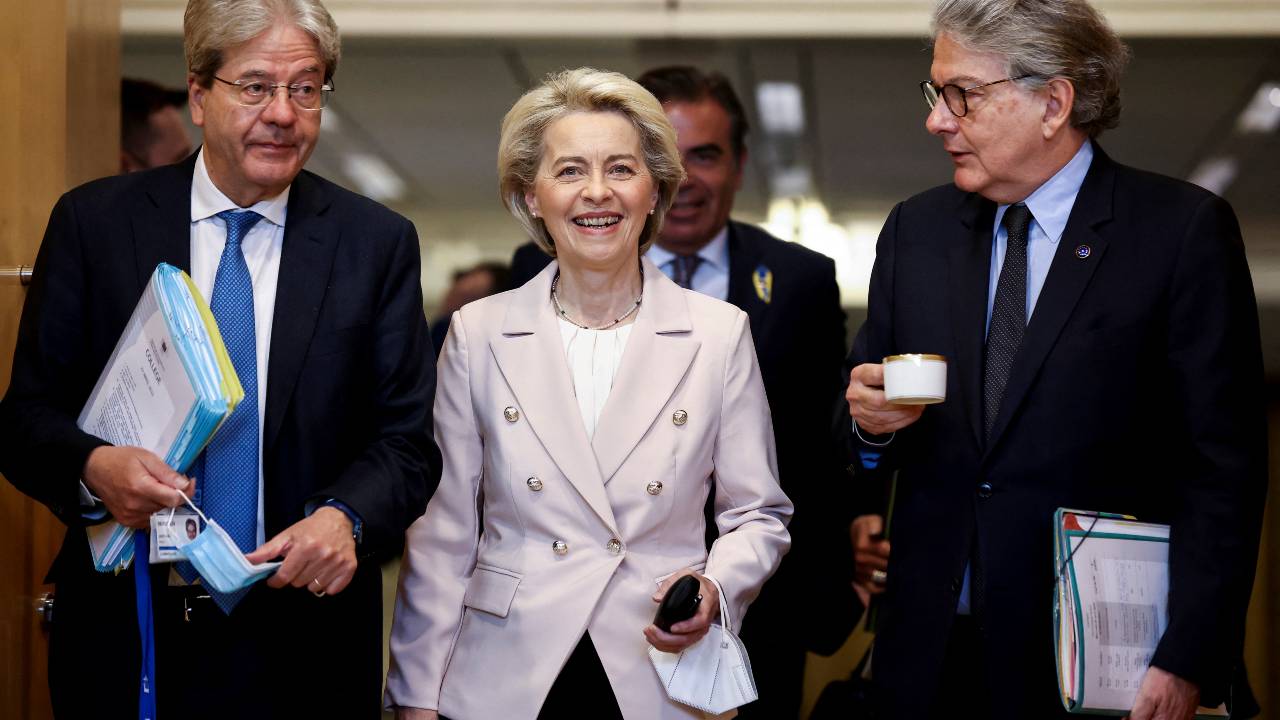 Ambassadors from the EU's 27 governments are expected to adopt the Commission proposals as early as this week, allowing them to become law soon after.

Hungary and Slovakia could be exempt from the embargo until the end of 2023, due to their high dependency on Russian energy. However, many other EU governments are yet to be convinced by the measures and the proposed timeline.

A Czech minister said the planned Russian oil ban did not include mechanisms for sharing the burden, describing this as a problem, while Hungary said it saw no plans or guarantees in the proposals on how a transition period could be managed.

Apart from oil, the latest round of sanctions would also hit Sberbank SBER.MM, Russia's top lender, adding it to several banks already excluded from the SWIFT messaging system.

"We de-SWIFT Sberbank – by far Russia's largest bank, and two other major banks. By that, we hit banks that are systemically critical to the Russian financial system and Putin's ability to wage destruction," von der Leyen said.

"This will solidify the complete isolation of the Russian financial sector from the global system," she said.

The lender, which left almost all its European markets in early March, has previously said that further sanctions would not have a significant impact on its operations.

The Commission also wants to take state-owned Russian broadcasters RTR-Planeta and R24 off the European airwaves, diplomats said, although von der Leyen did not give details in her address to parliament.

The EU's chief executive also announced a suggested recovery plan for Ukraine once the conflict ends, saying there was a need for hundreds of billions of euros in funding to rebuild the country.

"Eventually, it will pave the way for Ukraine's future inside the European Union," von der Leyen said.

Cover image: According to an EU diplomat, Patriarch Kirill of Moscow and All Russia is set to be sanctioned by the EU over his support for Russia's actions in Ukraine. /Sergey Pivovarov/Reuters