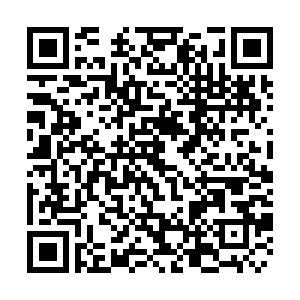 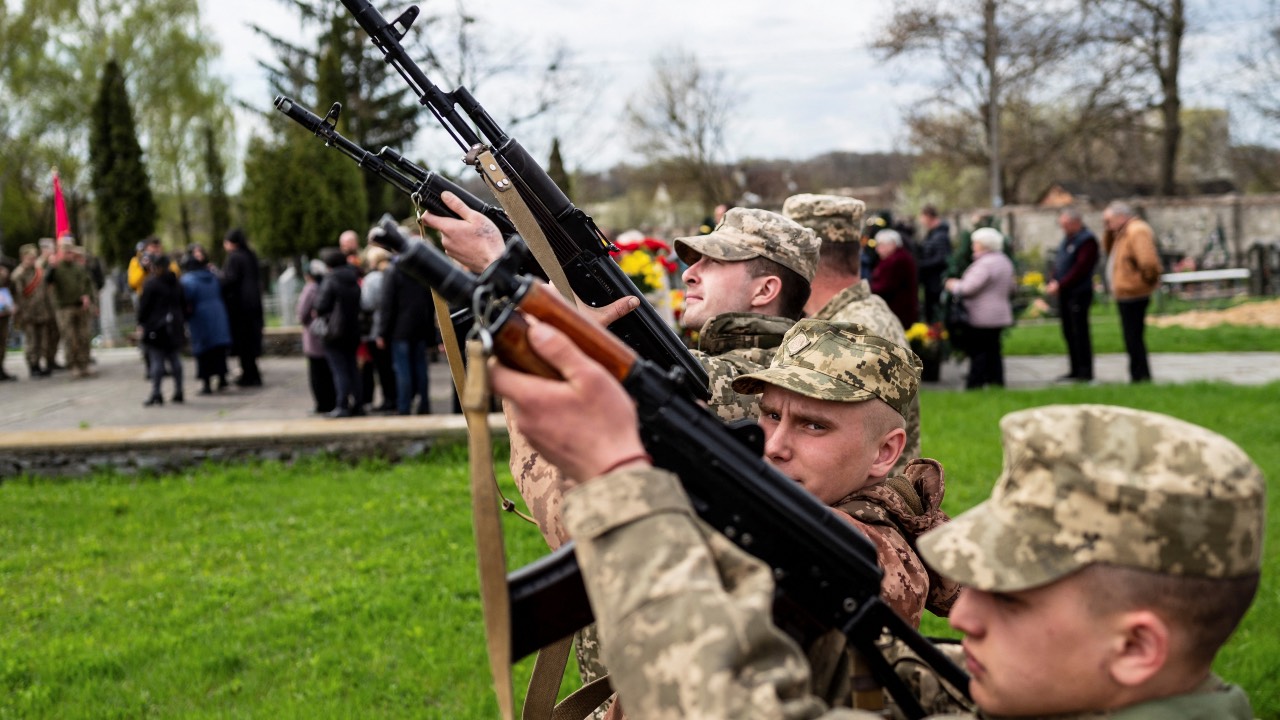 • Germany is considering sending long-ranged howitzers to Ukraine, a security source said on Friday, only days after Berlin first decided to supply heavy weapons to Kyiv.

• The United States does not believe that there is a threat of Russia using nuclear weapons despite a recent escalation in Moscow's rhetoric, a senior U.S. defense official said on Friday.

• A Ukrainian fighter holed up in Mariupol's steel works said on Friday he hoped the United Nations would come to the besieged and devastated area to evacuate civilians, and that for the first time he had real hope his troops might make it out alive.

• Ukraine, backed by dozens of other countries, has written to the World Health Organization's regional chief calling for an urgent meeting on the impact of Russia's offensive on health and healthcare, a letter obtained by Reuters on Friday showed.

• President Volodymyr Zelenskyy praised Biden's offer of help, which amounts to nearly 10 times the aid Washington has sent so far since the conflict began. "Thank you @POTUS and the American people for their leadership in supporting Ukraine in our fight against Russian aggression. We defend common values - democracy and freedom. We appreciate the help. Today it is needed more than ever!" Zelenskyy tweeted.

• Companies and countries were at odds over Moscow's ruble-for-gas payment system on Friday, while European officials promised more guidance on whether buying Russian gas can comply with sanctions. Russia said it saw no problem with its plan.

• A ship loaded with Ukrainian corn left a Romanian Black Sea port on Friday, allowing Kyiv to dodge a Russian blockade of its key grain exports. Romania made the port of Constanta available to Ukraine after its ports were effectively cut off from the world since the conflict began on February 24.

• Ukrainian rescue workers on Friday recovered the body of a Radio Liberty producer from under the rubble of a building in Kyiv that was hit by a missile, the U.S. broadcaster said. The death was the first reported in Thursday's missile strike as the UN chief visited Kyiv.

• Russia's central bank says it is cutting its key interest rate for a second straight time because "price and financial stability risks (are) no longer on the rise".

• Two British men working as aid volunteers in Ukraine have been taken captive by Russian forces on suspicion they are "spies", according to Presidium Network, a humanitarian organization. 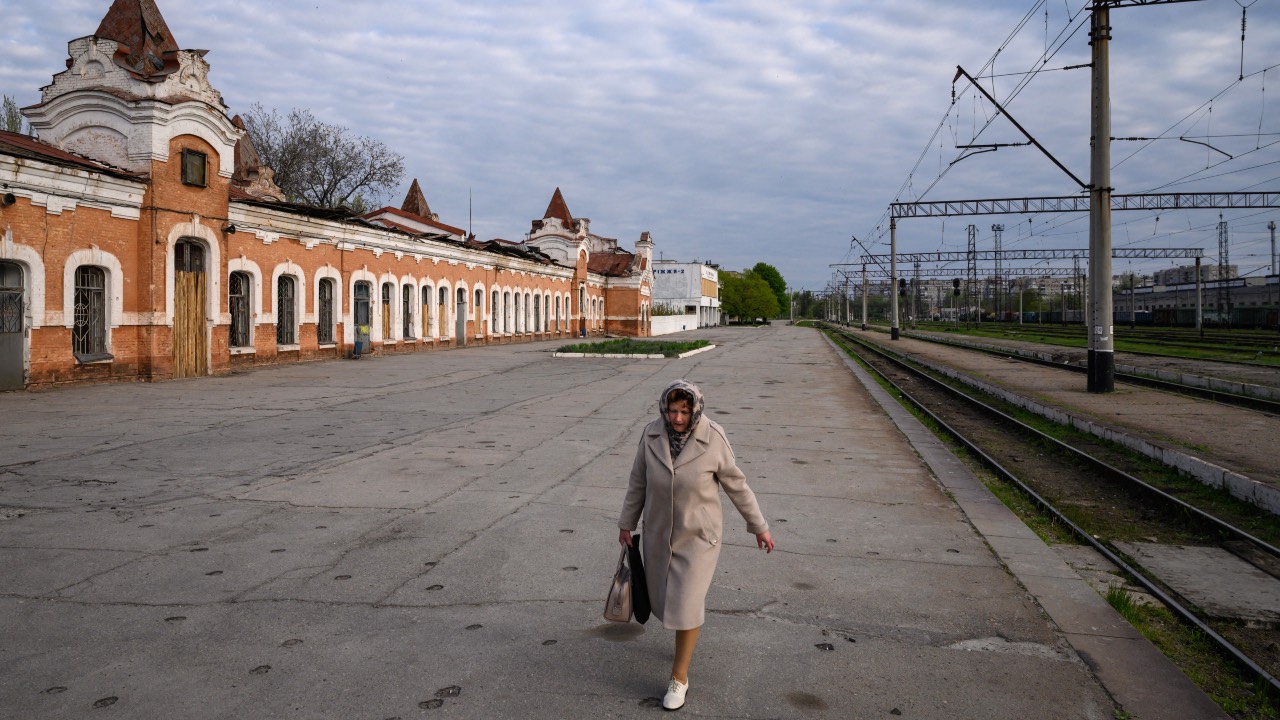 A woman walks through a railway station in Zaporizhzhia. /Ed Jones/AFP

A woman walks through a railway station in Zaporizhzhia. /Ed Jones/AFP

• Kharkiv local Governor Oleg Sinegubov said five civilians were killed on Thursday in what he described as near-continuous shelling.

• The US Defense Department warned Americans against going to Ukraine to join the fight against Russia after a former marine was killed.

• Guterres said during his visit to Kyiv that the UN Security Council failed to go far enough in its efforts to "prevent and end" to Russia's offensive in Ukraine. "Let me be very clear: the Security Council failed to do everything in its power to prevent and end to this war," he told a news conference with Zelenskyy. "And this is the source of great disappointment, frustration and anger."

• Russian President Vladimir Putin will attend the G20 summit in November and Ukrainian leader Volodymyr Zelenskyy has also been invited, the leader of host nation Indonesia said on Friday.

• Georgia's Borjomi mineral water, partly owned by a Russian billionaire, said it was suspending production because of "financial problems" linked to the conflict in.

• Russia's finance ministry said it had completed payments on two dollar-denominated bonds amid mounting fears that the sanctions-hit country may be forced to default on its foreign debt.

• Ukraine acknowledged it was taking heavy losses in Russia's assault in the east, but said Russia's losses were even worse. "We have serious losses but the Russians' losses are much much bigger.... They have colossal losses," presidential advisor Oleksiy Arestovych said.

• Norway will close its borders and ports to Russian trucks and ships, joining sanctions imposed by the European Union, the Norwegian foreign ministry said on Friday. Russian fishing vessels, which often land their catch at ports in northern Norway, will receive exemptions from sanctions.

• The UK government said it was deploying about 8,000 troops for exercises across eastern Europe in a show of strength following Russia's military campaign in Ukraine.

• The world's largest security body, the Organization for Security and Cooperation in Europe (OSCE), said it was officially winding up its observer mission in Ukraine after eight years, after Russia vetoed its extension.

• Britain said it was sending experts to help Ukraine with gathering evidence and prosecuting war crimes, with a team due to arrive in Poland in early May.

Local residents take household items out of an apartment building damaged during the conflict in the southern port city of Mariupol. /Alexander Ermochenko/Reuters

Local residents take household items out of an apartment building damaged during the conflict in the southern port city of Mariupol. /Alexander Ermochenko/Reuters

Kyiv urges WHO to assess impact of healthcare disruptions

Ukraine, backed by dozens of other countries, has written to the World Health Organization's (WHO) regional chief calling for an urgent meeting on the impact of Russia's offensive on health and healthcare, a letter obtained by Reuters news agency on Friday showed.

The letter, sent this week by Ukraine's diplomatic mission in Geneva, Switzerland, where the WHO is headquartered, is signed by some 38 other members of the agency's European region, including France, Germany and Britain.

Addressed to Europe regional director Hans Kluge, it urged him to convene a meeting "no later than 9 May" and referred to attacks on health facilities, disrupted vaccination campaigns and concerns about the risk of radiological and chemical events.

The letter also suggested that Director-General Tedros Adhanom Ghebreyesus address the matter at a meeting of the World Health Assembly in May, when the body's 194 member states are set to decide on key reforms to prepare for future pandemics.

The WHO did not immediately respond to a request for comment.

The WHO has recorded some 177 attacks on healthcare facilities and infrastructure in Ukraine resulting in 73 deaths since the start of the conflict, without assigning responsibility.

"These attacks deprive people of urgently needed care, endanger healthcare providers, and undermine health systems," the WHO said in a report on Ukraine on Thursday.

In the same report it said the health system in hard-hit eastern Ukraine had collapsed, adding that nearly all clinics and hospitals in the Luhansk region were damaged or destroyed. 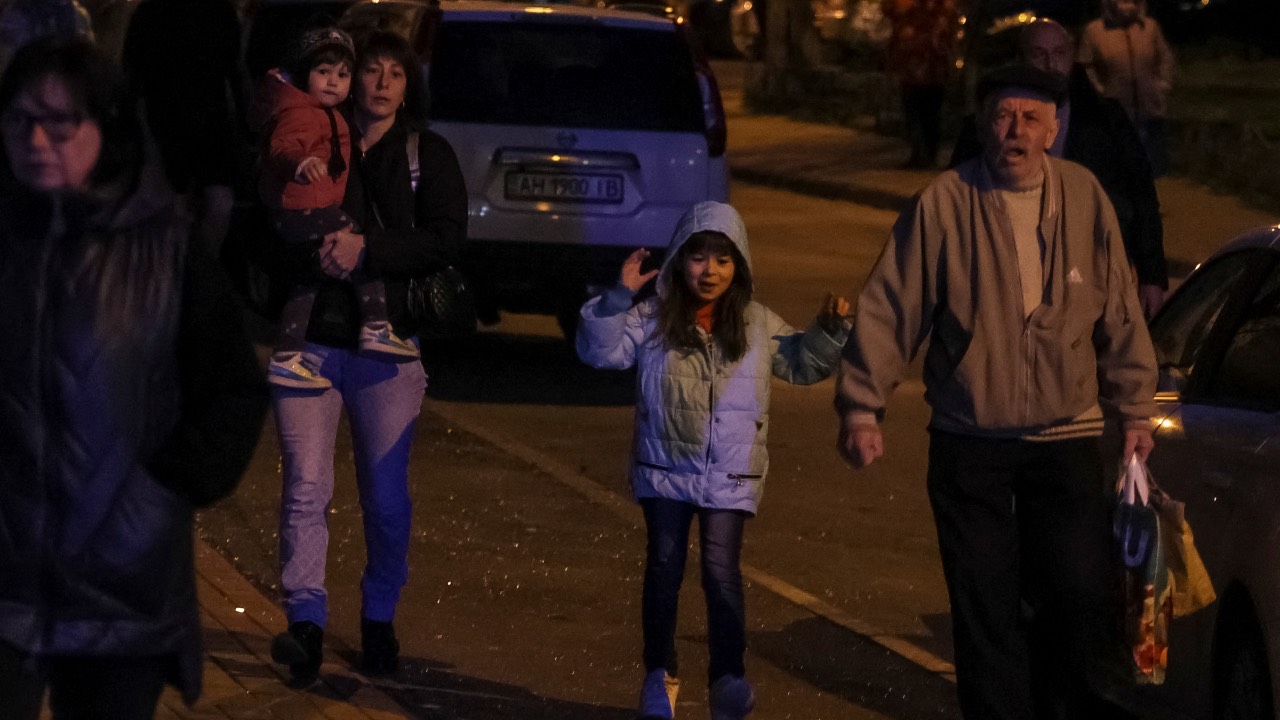 Kyiv residents escape from their building after it was shelled. /Gleb Garanich/Reuters

Kyiv residents escape from their building after it was shelled. /Gleb Garanich/Reuters

Russia's defense ministry on Friday confirmed it had carried out an air strike on Kyiv during a visit by UN Secretary-General Antonio Guterres.

"High-precision, long-range air-based weapons of the Russian Aerospace Forces have destroyed the production buildings of the Artyom missile and space enterprise in Kyiv," the ministry said in its daily briefing on the conflict in Ukraine.

Ukraine said that one person had been killed in the strike on Thursday, the first in the capital in nearly two weeks and which Guterres's spokesman described as "shocking".

Guterres on Thursday toured Bucha and other Kyiv suburbs where Moscow is alleged to have committed war crimes.

The defense ministry said its forces had carried out a range of air strikes on Thursday, destroying three power substations at Ukrainian railway hubs and a Tochka-U missile launcher that it said had carried out an attack on the Russian-held city of Kherson.