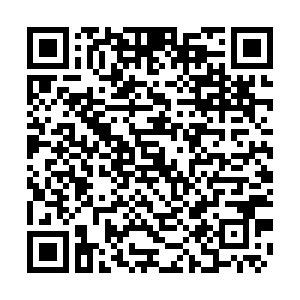 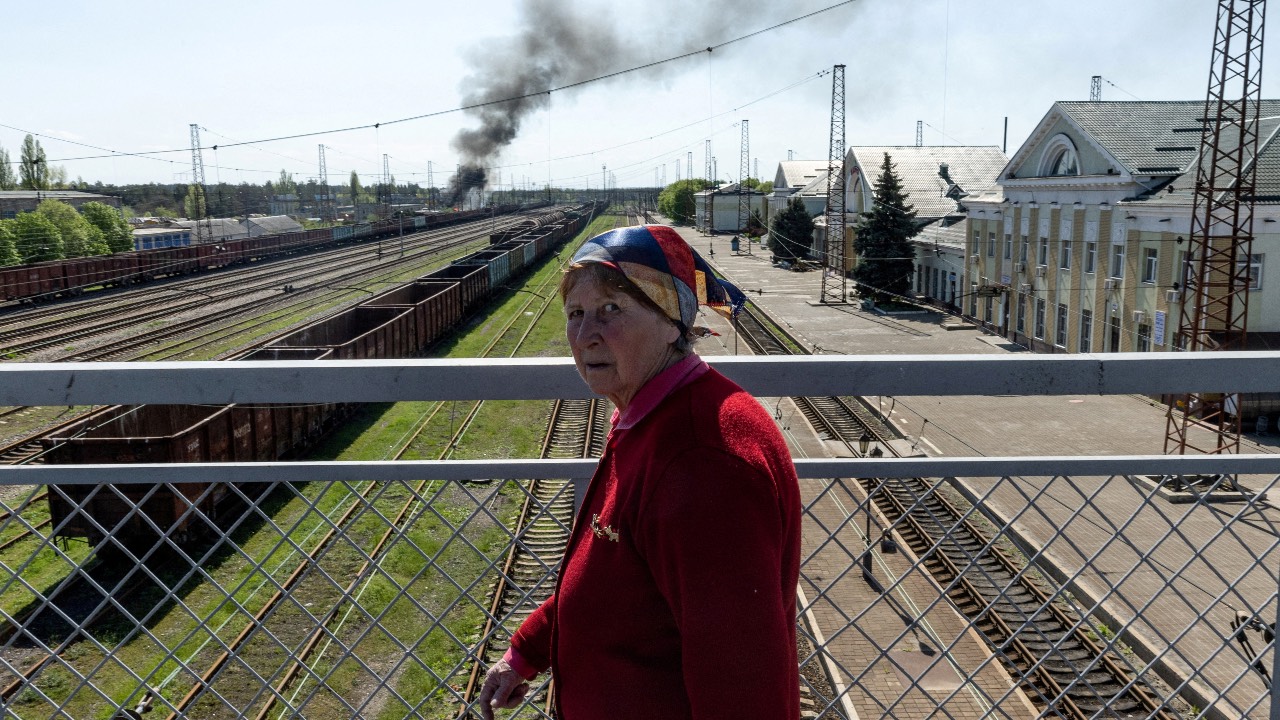 A woman walks along a bridge as smoke rises in the background following a military strike on a facility near the railway station, in the frontline city of Lyman, Donetsk region. /Jorge Silva/Reuters

A woman walks along a bridge as smoke rises in the background following a military strike on a facility near the railway station, in the frontline city of Lyman, Donetsk region. /Jorge Silva/Reuters

• NATO is ready to maintain support for Ukraine for years in the conflict with Russia, including help for Kyiv to shift from Soviet-era weapons to modern Western arms and systems, Secretary-General Jens Stoltenberg said.

• Ukrainian President Volodomyr Zelenskyy says he believes after talks with U.N. chief that "successful result" is possible "in terms of deblocking Azovstal" plant in Mariupol.

• Russia's defense ministry said that the military had fired missiles at six arms and fuel depots in Ukraine and destroyed them.

• Ukrainian prosecutors said they were investigating 10 Russian soldiers on suspicion of war crimes in Bucha, where dozens of bodies in civilian clothes were found after Russian troops retreated.

• Ukraine fired three rockets at the center of the southern city of Kherson but Russian occupying forces shot down two of them, RIA news agency cited a security source as saying.

• Russia has handed over 33 Ukrainian soldiers, including 13 officers, in an exchange of prisoners of war with Ukraine, Ukrainian Deputy Prime Minister Iryna Vereshchuk said on Thursday.

• A British man has been killed in Ukraine and a second British man is missing, according to the UK Foreign Office.

• The German parliament voted in favour of providing Ukraine with heavy weapons, backing a shift in policy that came with the decision to send tanks to Kyiv earlier this week.

• The Dutch government is likely to send a forensic team from the national military police to Ukraine to help investigate possible war crimes, Dutch press agency ANP reported on Thursday.

• Turkish President Recep Tayyip Erdogan told Russia's Vladimir Putin on Thursday that Ankara was ready to do more to end the conflict in Ukraine after helping arrange a Russian-US prisoner swap.

• During his first visit to Ukraine, UN Secretary-General Antonio Guterres toured several towns and villages outside Kyiv where Russian forces are accused of killing civilians. • The White House proposed to use assets seized from Russian oligarchs to compensate Ukraine for damage caused by Moscow's offensive in the country.

• Bulgaria's Prime Minister Kiril Petkov urged Europe to be "stronger" and find alternatives to Russian gas, during a visit to Ukraine.

• Ukraine and Bulgaria have reached an agreement on transporting Ukrainian grain via the Bulgarian port of Varna, Zelenskyy said after talks with Petkov on Thursday.

• Chancellor Olaf Scholz says Germany must prepare for possible Russian gas export to stop. "We can only prepare ourselves, and it's what we had already started to do before the war," he said, adding that it "makes no sense" to speculate on possible Russian actions.

• Russia stepped up its assaults on eastern and southern Ukraine, Kyiv said. "The enemy is increasing the pace of the offensive operation. The Russian occupiers are exerting intense fire in almost all directions," Ukraine's military command said of the situation on the main front in the east.

• The bodies of 1,150 civilians have been recovered in Ukraine's Kyiv region since Russia started its offensive and 50 to 70 percent of them have bullet wounds from small arms, Kyiv police said on Thursday.

• The Kremlin said on Thursday that Western arms deliveries to Ukraine are dangerous for European security. "The tendency to pump weapons, including heavy weapons, into Ukraine – these are the actions that threaten the security of the continent, provoke instability," Kremlin spokesman Dmitry Peskov told reporters.

• More than 5.3 million Ukrainians have fled their country since the start of the conflict, the United Nations said on Wednesday, with more than 52,000 joining them in the past 24 hours.

• Ukraine's southern Kherson region will start using the Russian ruble from May 1, an official from a pro-Russian committee which identifies itself as the region's "military-civil administration" told Russian news agency RIA. 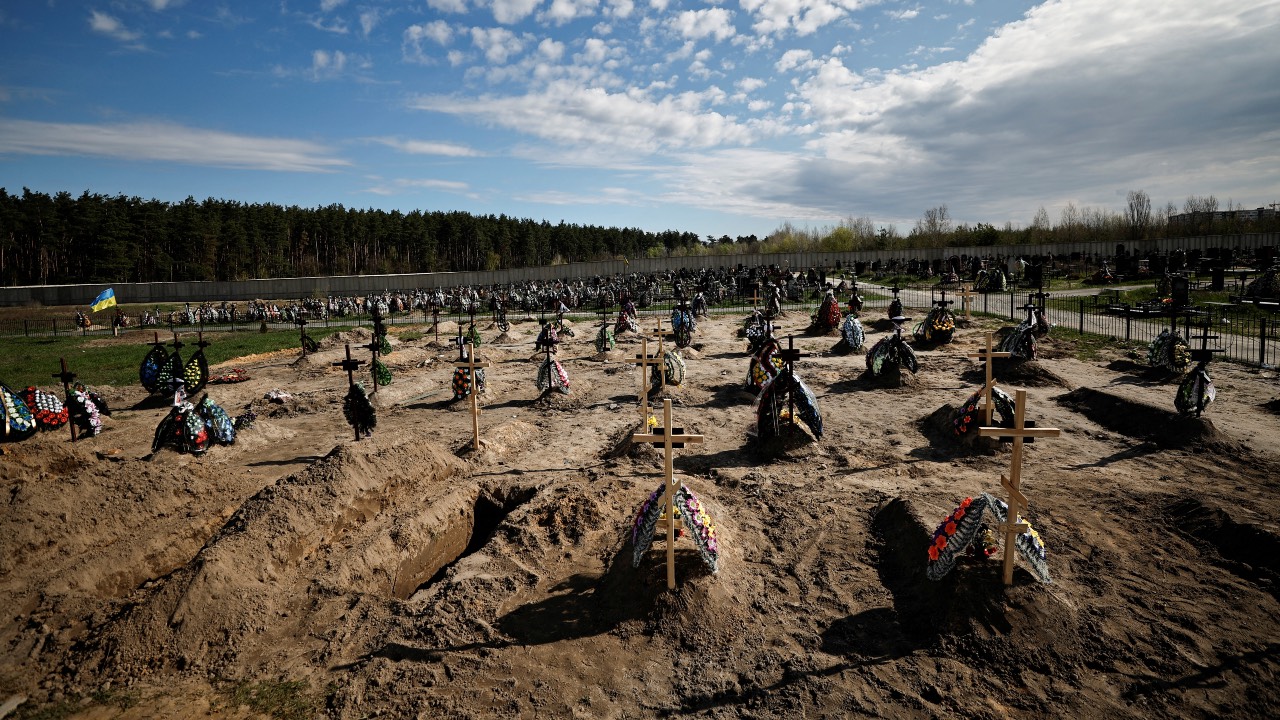 Prosecutors said the suspects had allegedly harmed civilians during their occupation of Bucha just outside Kyiv in March. /Zohra Bensemra/Reuters

Prosecutors said the suspects had allegedly harmed civilians during their occupation of Bucha just outside Kyiv in March. /Zohra Bensemra/Reuters

Bucha war crimes: 'The suspects will be declared wanted'

Ukrainian prosecutors said they were investigating 10 Russian soldiers on suspicion of war crimes in Bucha where dozens of bodies in civilian clothes were found after Russian troops retreated.

"Ten servicemen of the 64th motorized infantry brigade of the Russian armed forces, part of the 35th army, are suspected of cruel treatment of civilians and other violations of laws and customs of war," the prosecutor general's office said in a statement.

"The suspects will be declared wanted in order to detain them and bring them to justice."

"It's actually 8,600 cases only about war crimes, and more than 4,000 cases that are connected with war crimes," Venediktova said.

Prosecutors said the suspects had allegedly harmed civilians during their occupation of Bucha just outside Kyiv in March, and were also being investigated for "premeditated murder".

Horrific images of dozens of bodies in civilian clothes lying in the streets, some with their hands tied behind their backs, in Bucha and other towns around Kyiv, shocked the world when they emerged earlier this month.

Prosecutors alleged the suspects "held hostage civilians who did not take part in hostilities and did not have weapons". According to their investigation, the Russian servicemen put people "on their knees, blindfolded them" and "tied their hands with plastic ties".

They allege the suspects tried to extract information on the whereabouts of Ukrainian troops and "inflicted body injuries" on them to that end.

People had been thoroughly beaten up and were also "hit with gun butts", it said.  The soldiers also "looted the local population, removing personal belongings and household appliances", it said.

There have been widespread reports of theft by Russian soldiers in Ukraine.

Earlier this month, Russian President Vladimir Putin bestowed honours on the 36th brigade, which Ukrainian officials had previously said was behind the alleged war crimes in Bucha. 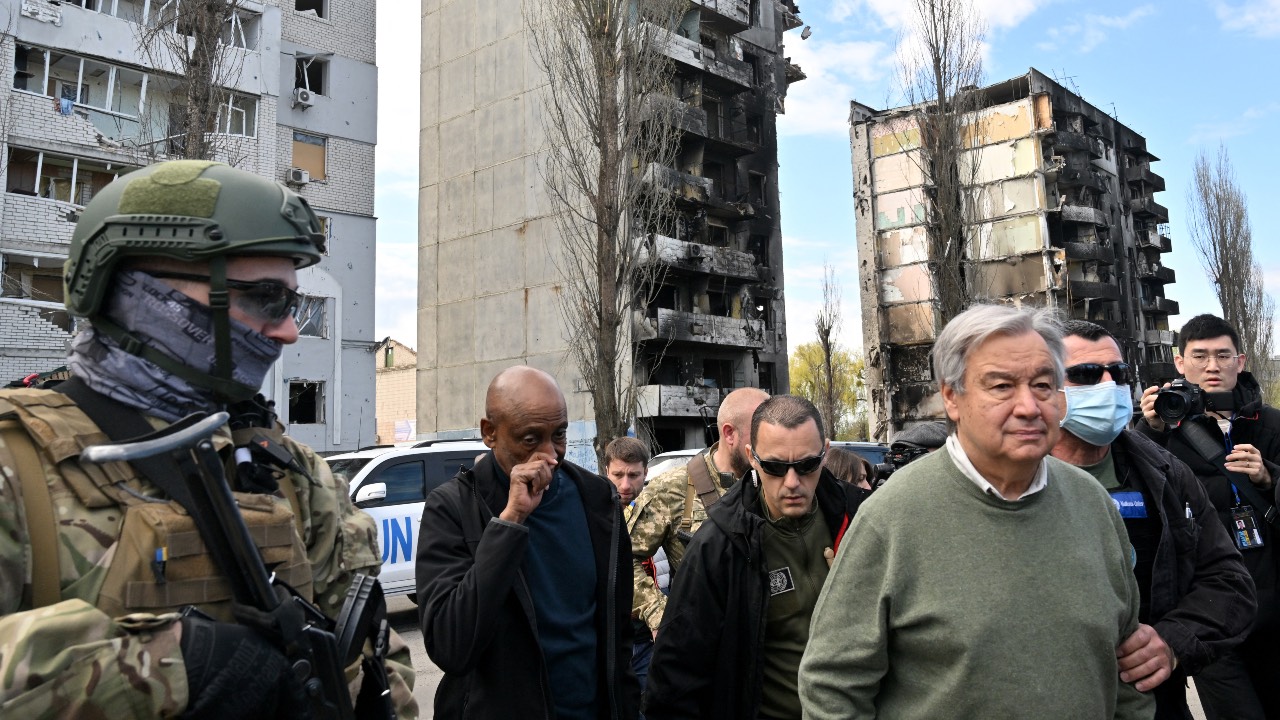 UN Secretary-General Antonio Guterres in the town of Borodianka outside Kyiv where Russian forces were accused of having killed civilians. /Sergei Supinsky/AFP

UN Secretary-General Antonio Guterres in the town of Borodianka outside Kyiv where Russian forces were accused of having killed civilians. /Sergei Supinsky/AFP

'The war is an absurdity in the 21st century'

UN Secretary-General Antonio Guterres described war as "evil" and absurd during a visit to Borodianka outside Kyiv, where Russian troops are accused of killing civilians during their occupation.

The United Nations chief during his first visit to the war-scarred country since Russia started its military action on February 24, was also expected to visit the town of Bucha ahead of talks with Ukrainian President Volodymyr Zelenskyy.

In Borodianka, Gutteres was accompanied by local military and civilian governors who showed the UN's head residential buildings that had been destroyed in Russian attacks.

His visit to Ukraine comes on the back of talks in Moscow with Russian President Vladimir Putin whose troops over recent days have pushed deeper into the eastern Donbas region.