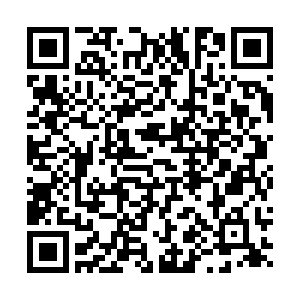 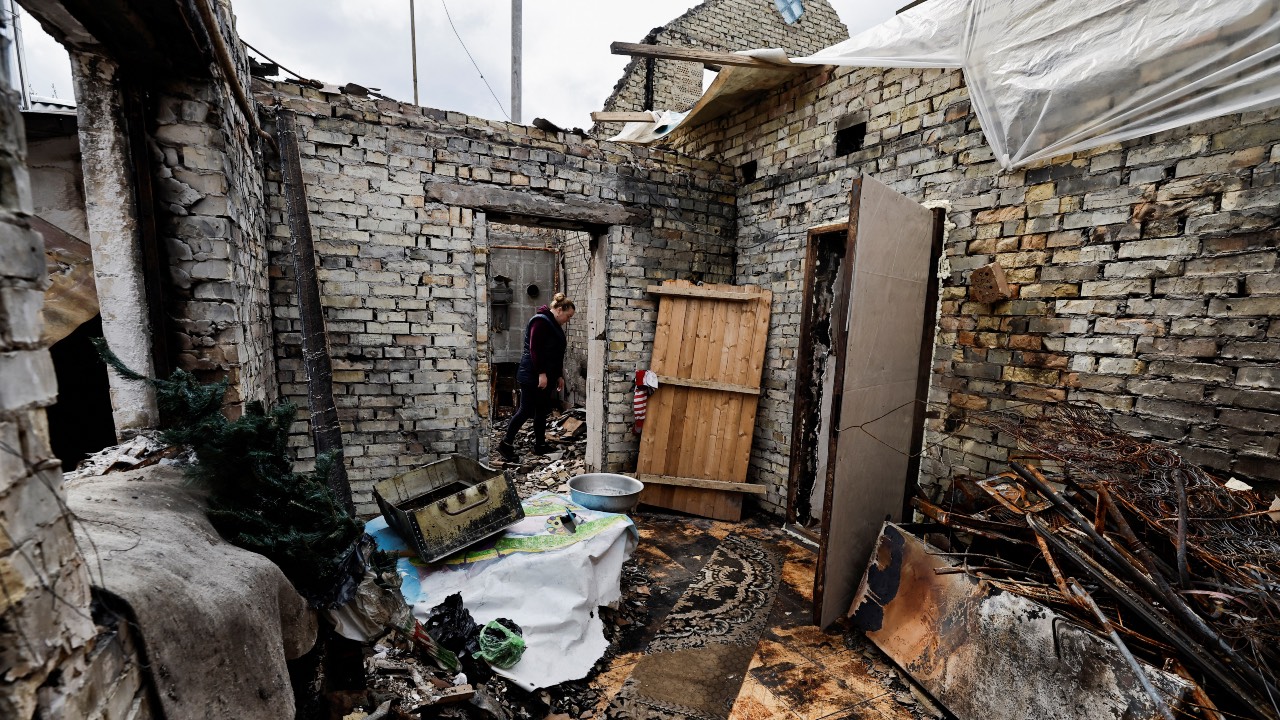 A 32-year-old woman is pictured inside her house, which according to her was destroyed by shelling in Blystavytsia, Kyiv region. /Zohra Bensemra/Reuters

A 32-year-old woman is pictured inside her house, which according to her was destroyed by shelling in Blystavytsia, Kyiv region. /Zohra Bensemra/Reuters

• Russian Foreign Minister Sergei Lavrov told visiting UN Secretary-General Antonio Guterres that Moscow is "ready to cooperate" with the UN to "alleviate the plight of the civilian population" in Ukraine.

• Ukrainian Deputy Prime Minister Iryna Vereshchuk said no humanitarian corridors were operating on Tuesday as there had been no break in the fighting in Ukraine.

• Sergei Lavrov dismissed a proposal from Ukraine to hold peace talks in Mariupol. He added it was too early to talk about who would mediate in any new negotiations.

• Russia's temporary takeover of the Chernobyl site was "very, very dangerous" and raised radiation levels but they have now returned to normal, the head of the UN atomic watchdog said on Tuesday.

• The European Union warned that Russia's offensive in Ukraine risks setting off a fresh nuclear disaster in Europe, 36 years after the accident at the Chernobyl plant.

• Nikolai Patrushev, the powerful secretary of Russia's Security Council, said Ukraine is spiraling towards a collapse into several states because of what he cast as a U.S. attempt to use Kyiv to undermine Russia.

• The U.S. and its allies pledged new packages of ever heavier weapons for Ukraine during a meeting on Tuesday at a German air base.

• The U.S. and its allies will meet once a month to discuss Ukraine's defense needs to fight Russian troops, US Defense Secretary Lloyd Austin said on Tuesday.

• The U.S. and Ukraine are "largely aligned" on what military equipment Ukraine needs to continue its fight against Russia and what Washington can provide, U.S. Secretary of State Antony Blinken said on Tuesday.

• Moldova's president said a series of attacks in the Russia-backed breakaway region of Transnistria were an attempt by factions within the territory to increase tensions. 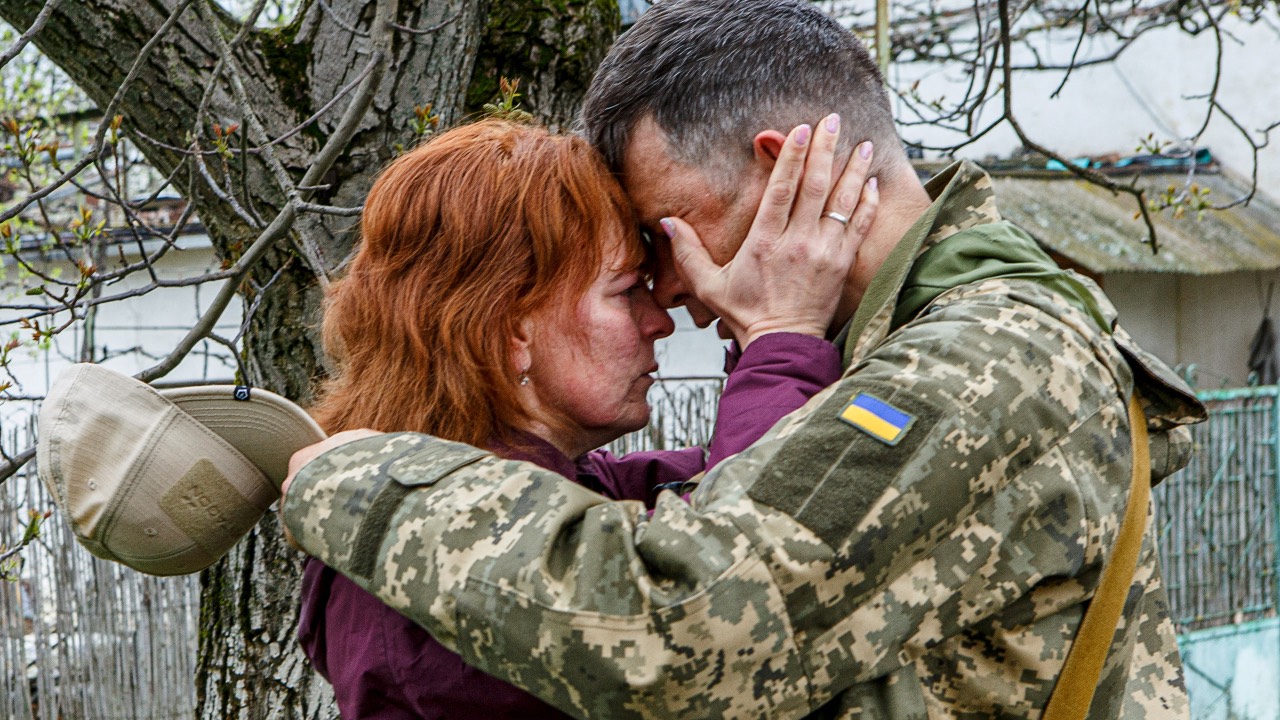 A woman says goodbye to her serviceman husband as he leaves for the frontline in Uzhhorod, Ukraine. /Reuters

A woman says goodbye to her serviceman husband as he leaves for the frontline in Uzhhorod, Ukraine. /Reuters

• Energy prices have surged since the start of the conflict in Ukraine and, along with other commodities, are likely to remain at "historically high" levels through 2024, endangering economic growth, the World Bank warned on Tuesday.

• Russian Foreign Minister Sergei Lavrov warned there is a "real" danger of World War III breaking out as a result of the Ukraine conflict. "The danger is serious, it is real, you can't underestimate it," he told the Interfax news agency.

• U.N. Secretary-General Antonio Guterres said in Moscow that conditions for a ceasefire in Ukraine should be created as soon as possible.

• The United Nations said that the worsening situation in Ukraine forced it to more than double its aid appeal to over $2.25 billion for the conflict-ravaged country.

• Germany will authorize the deliveries of tanks to Ukraine, Defense Minister Christine Lambrechty said, in what would be a clear switch in Berlin's cautious policy on military backing for Kyiv.

• Wimbledon was left with "no viable alternative" to banning Russian and Belarusian players from this year's tennis Championships, tournament chiefs at the All England Club said on Tuesday.

• Moscow said it was expelling three Swedish diplomats after Stockholm expelled three Russian diplomats over the conflict in Ukraine, despite Sweden saying four were dismissed.

• A Russian court hit Facebook's and Instagram's parent company Meta and video platform TikTok with fines for refusing to take down LGBT content.

• The International Skating Union said that Russia and Belarus would not be allowed to host international skating events and stripped Russia of figure skating's Rostelecom Cup. 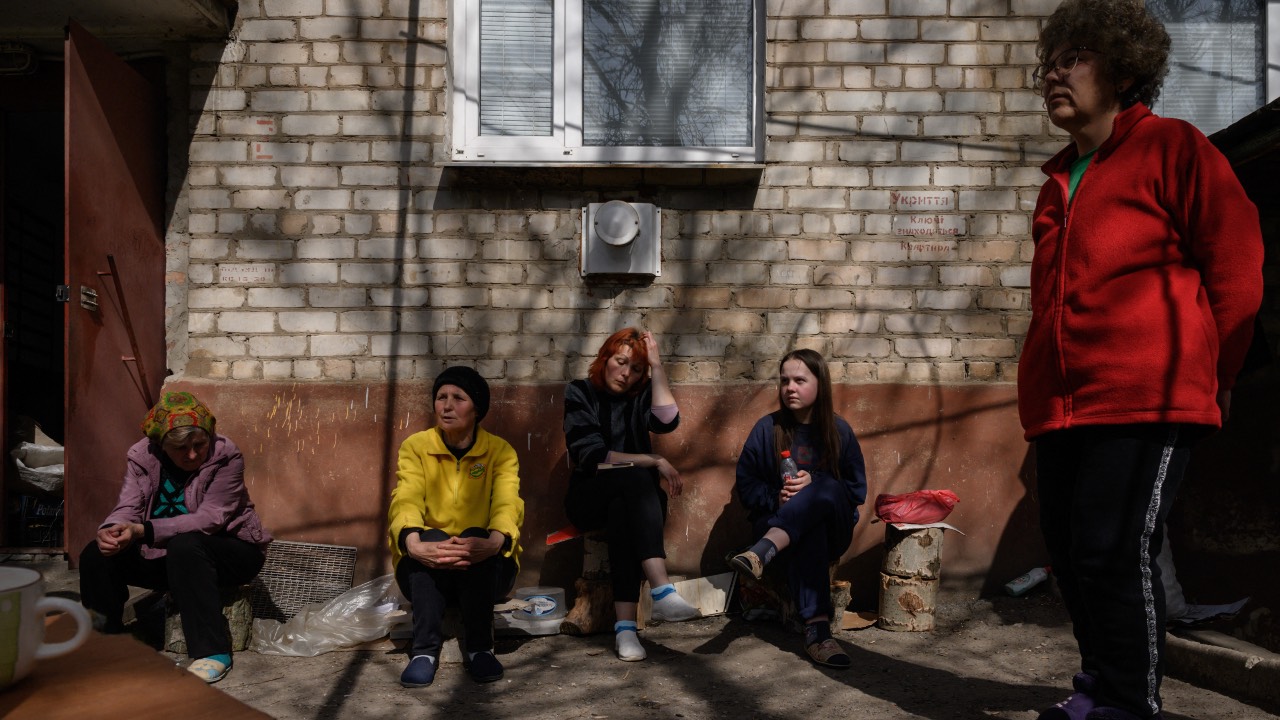 Residents sit outside the basement shelter they use to protect themselves at night and during shelling attacks, in the frontline town of Hulyaipole, southeast of Zaporizhzhia. /Ed Jones/AFP

Residents sit outside the basement shelter they use to protect themselves at night and during shelling attacks, in the frontline town of Hulyaipole, southeast of Zaporizhzhia. /Ed Jones/AFP

UN Secretary-General Antonio Guterres called for Moscow and Kyiv to work together to set up aid and evacuation corridors in war-torn Ukraine, during a visit to Russia.

"We urgently need humanitarian corridors that are truly safe and effective," he told a press conference after talks with Russian Foreign Minister Sergei Lavrov.

"To that end I have proposed the establishment of a humanitarian contact group bringing together the Russian Federation, Ukraine and the United Nations to look for opportunities for the opening of safe corridors," he said.

Guterres also called for an independent investigation into "possible war crimes" in Ukraine.

"I am concerned about the repeated reports of violations of international humanitarian and human rights law and possible war crimes. And they require independent investigation for effective accountability," Guterres said.

Lavrov said Moscow was ready to cooperate with the United Nations to help civilians in Ukraine.

He said Russia was in favor of resolving the conflict in Ukraine with peace talks, but said it was "depressing" the way the Kyiv delegation and Ukraine's President Volodymyr Zelenskyy behaved. 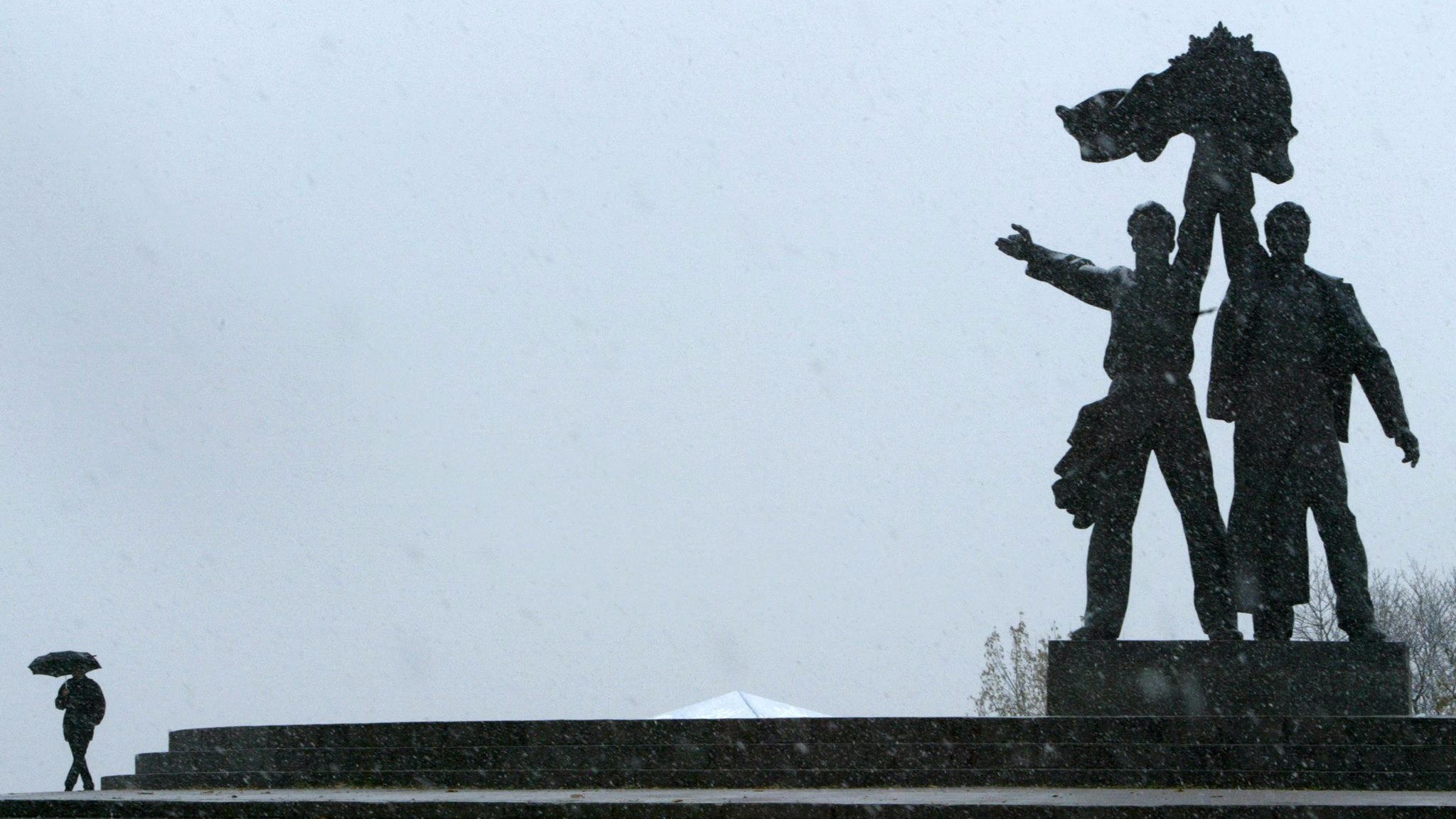 "We are removing the bronze sculpture of two workers installed in the center of the capital in 1982 'to commemorate the reunification of Ukraine with Russia'," Kyiv mayor Vitali Klitschko said in a statement on social media.

"The dismantling has started today and we plan to finish it this evening," he added. "And what is symbolic is that when they tried to lift the sculpture with a crane, the head of a Russian worker fell off."

He explained the decision citing what he called Moscow's "barbaric desire to destroy our state and peaceful Ukrainians," with the full-scale offensive launched on February 24.

Klitschko said a second component of the sculpture would be removed later and the giant arch above the workers would be renamed and illuminated with the colors of the Ukrainian flag.

He said city authorities were working on plans to demolish around 60 monuments in the capital related to Russia and the Soviet Union.

Meanwhile, Klitschko added, some 460 streets and other objects in the city are slated for renaming.

Since Russia annexed the Crimean peninsula from Ukraine in 2014 and Moscow threw its political clout behind separatists in the east of the country, Kyiv has worked to remove Soviet symbols from the country in a program of "de-communization". 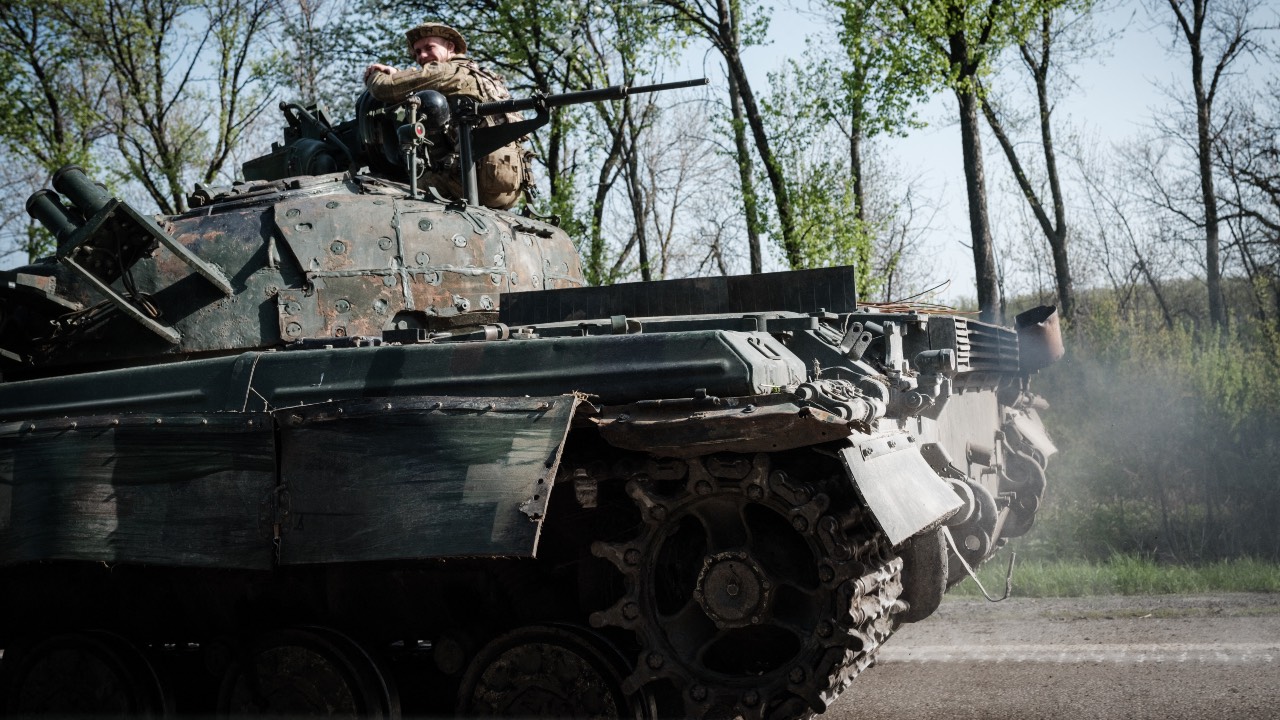 A Ukrainian soldier sits on a tank near Sloviansk, eastern Ukraine. /Yasuyoshi Chiba/AFP

A Ukrainian soldier sits on a tank near Sloviansk, eastern Ukraine. /Yasuyoshi Chiba/AFP

Sergei Lavrov: 'The danger is serious, it is real'

Russian Foreign Minister Sergei Lavrov said on Monday that peace talks with Ukraine would continue, while warning there was a "real" danger of World War III.

Speaking to Russian news agencies, he criticized Kyiv's approach to the talks, adding, "Good will has its limits. But if it isn't reciprocal, that doesn't help the negotiation process. But we are continuing to engage in negotiations with the team delegated by [Ukrainian President Volodymyr] Zelenskyy, and these contacts will go on."

But Lavrov accused former actor Zelenskyy of "pretending" to negotiate.

"He's a good actor," he said. "If you watch attentively and read attentively what he says, you'll find a thousand contradictions."

Given the current tensions, Lavrov said the danger of a World War III was "real". Russia, Lavrov said, was doing a lot to uphold the principle of striving to prevent nuclear war at all costs.

"This is our key position on which we base everything. The risks now are considerable," Lavrov said. "I would not want to elevate those risks artificially. Many would like that. The danger is serious, real. And we must not underestimate it."

Of the ongoing conflict in Ukraine, he said he was confident that "everything will of course finish with the signing of an accord.

"But the parameters of this accord will be defined by the state of the fighting that will have taken place at the moment the accord becomes reality," he added.