• Ukraine's President Volodymyr Zelenskyy urged the UN to "act immediately" on President Vladimir Putin's invasion of his country, calling for Russia to be expelled from the United Nations (UN) Security Council.

• Zelenskyy compared Russia's devastating military action in Ukraine to the Nazis' 1937 bombing of the Spanish town of Guernica in an address to Spain's parliament. "It's April 2022 but it seems like April 1937 when the whole world heard about one of your cities, Guernica," he said.

• Vassily Nebenzia, Russia's ambassador to the UN said its troops were not shooting at civilian targets in order to save as many as civilians possible, which was why they were not advancing as fast as many expected.

• Nebenzia told the UNSC 600,000 people had been brought voluntarily into the country during the conflict in Ukraine, denying Kyiv's claim of mass deportations.

• Russia is not giving up on its offensive in Ukraine, but will try to refocus on completely taking the Donbas region in the coming weeks, NATO Secretary-General Jens Stoltenberg said on Tuesday.

• The European Commission proposed new sanctions against Russia over its invasion of Ukraine, including a ban on buying Russian coal and on Russian ships entering EU ports, and said it was working on banning oil imports too.

• Britain has frozen some $350 billion (321 billion euros) in assets from the "war chest" of Russian President Vladimir Putin, British Foreign Secretary Liz Truss said during a visit to Warsaw on Tuesday.

• The U.S. Internal Revenue Service has suspended information exchanges with Russia's tax authorities in a bid to hamper Moscow's ability to collect taxes and fund its military action in Ukraine, the U.S. Treasury Department said.

• A donor conference on Tuesday pledged a total of 659.5 million euros ($720.7 million) in direct financial support to Moldova, one of Europe's poorest nations, as it copes with a massive influx of Ukrainian refugees.

• Britain urged G7 and NATO nations to ban Russian ships from their ports and agree a timetable to phase out oil and gas imports from Russia.

• The U.S. has barred Russia from making debt payments using funds held at American banks, the US Treasury said.

• Russia is turning to microchip manufactures in China to circumvent Western sanctions which have boosted demand for bank cards linked to the Mir payment system, an executive with the domestic payment system said.

• The EU has ordered 19 Russians to leave host nation Belgium, the bloc said. Italy, Spain and Slovenia also expelled a raft of Russian diplomats amid increasing outrage over the Ukraine conflict, bringing the number of envoys ordered home by EU allies in 48 hours to almost 200.

• Twitter said it will not recommend Russian government accounts to users as part of a rule change affecting accounts run by states which limit access to the open internet and are engaged in armed interstate conflict.

• The Russian football federation has dropped an appeal against FIFA's World Cup ban, imposed after the conflict in Ukraine started, the Court of Arbitration for Sport said on Tuesday.

• EU stocks went down on Tuesday after Brussels proposed further sanctions against Russia.

• Satellite images taken in mid-March and released by the firm Maxar Technologies show human-sized objects lying in the streets of Bucha in the same places that video recorded on the ground shows dead bodies, undermining claims by Russia that the deaths occurred after its withdrawal from the town. Maxar Technologies is a U.S.-based space technology company with U.S. government agencies such as U.S. Intelligence and U.S. Civil Government as its primary customers. It is the U.S. Department of Defense's top geospatial intelligence contractor. The company was founded in Westminster, Colorado in 2017.

• China and Ukraine's foreign ministers have spoken for the first time in over a month, with Beijing maintaining its push for peace talks as allegations of Russian atrocities in towns around Kyiv grow.

• Video game maker Epic Games said on Monday that $144 million made from its popular "Fortnite" battle game will go to help the people of Ukraine.

• The next phase of the war in Ukraine could last for months after Russian forces pulled away from Kyiv in a shift toward the eastern regions, U.S. National Security Advisor Jake Sullivan said.

• Russian communications regulator Roskomnadzor said on Tuesday it wanted Wikipedia to remove "material with inaccurate information of public interest" about the situation in Ukraine. 'No different from other terrorists'

Ukrainian President Volodymyr Zelenskyy challenged the United Nations to "act immediately" or "dissolve yourself altogether" during a blistering address in which he showed a harrowing video of dead bodies, including children, he said were victims of Russian atrocities.

He demanded "accountability" at the UN Security Council on Tuesday for Russian "crimes" carried out during Moscow's military action in his country.

People "were killed in their apartments, houses... civilians were crushed by tanks while sitting in their cars in the middle of the road, just for their pleasure," Zelenskyy told the Council, including Moscow's envoy, describing alleged atrocities in Ukraine's Bucha.

"Women were raped and killed in front of their children, their tongues were pulled out only because the aggressors did not hear what they wanted to hear from them.

"So this is no different from other terrorists such as Daesh who occupied some territory, and here it is done by a member of the United Nations Security Council," he said, referring to the so-called Islamic State group.

The Ukrainian leader called on the 15-member council, which aims to ensure international peace and security, to "remove Russia as an aggressor and a source of war, so it cannot block decisions about its own aggression, its own war."

"The United Nations can be simply closed. Ladies and gentlemen, are you ready to close the UN? And the time of international law is gone? If your answer is no, then you need to act immediately," he added in his video address. 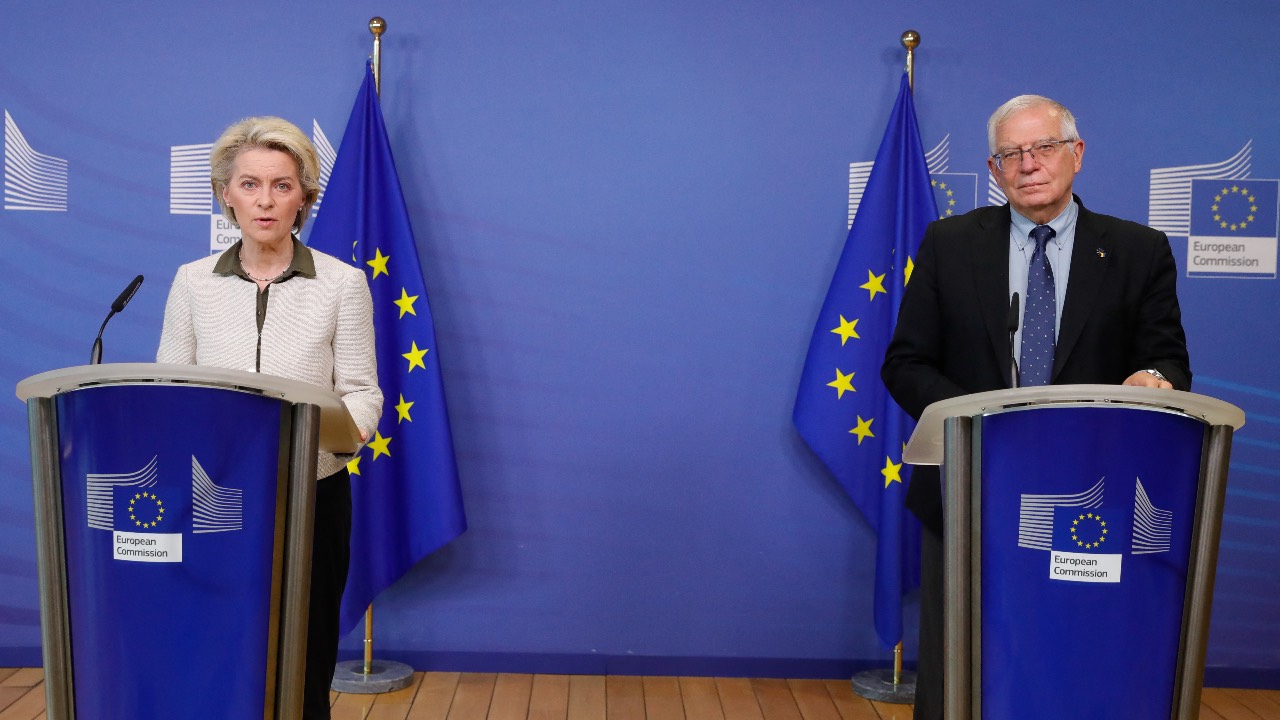 The Europeans are under pressure to hit Moscow in the crucial energy sector. Stephanie Lecocq/AFP

The Europeans are under pressure to hit Moscow in the crucial energy sector. Stephanie Lecocq/AFP

The European Commission proposed new sanctions against Russia over its military action in Ukraine, including a ban on buying Russian coal and on Russian ships entering EU ports, and said it was working on banning oil imports too.

"We all saw the gruesome pictures from Bucha and other areas from which Russian troops have recently left. These atrocities cannot and will not be left unanswered," the head of the European Union's executive, Ursula von der Leyen, said.

She said further pressure was needed and proposals entailed an EU ban on imports of coal from Russia worth 4 billion euros per year, and a full transaction ban on four key Russian banks, including the country's second-largest, VTB.

The EU will also ban Russian vessels and Russian-operated vessels from accessing EU ports, though there would be exemptions for agricultural and food products, humanitarian aid and energy.

Von der Leyen said the 27-nation bloc will also stop imports of Russian wood and cement as well as seafood and liquor worth in total some 5.5 billion euros annually.

It will exclude Russian companies from public procurement tenders in EU countries and add further individuals to a list of people whose assets in the EU will be frozen and who will not be allowed to enter the EU.

"We are proposing to take our sanctions a step further. We will make them broader and sharper so that they cut even deeper into the Russian economy," Von der Leyen added.