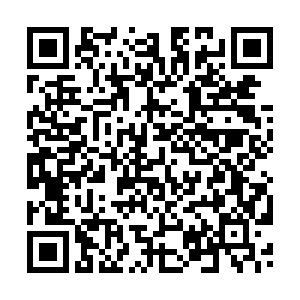 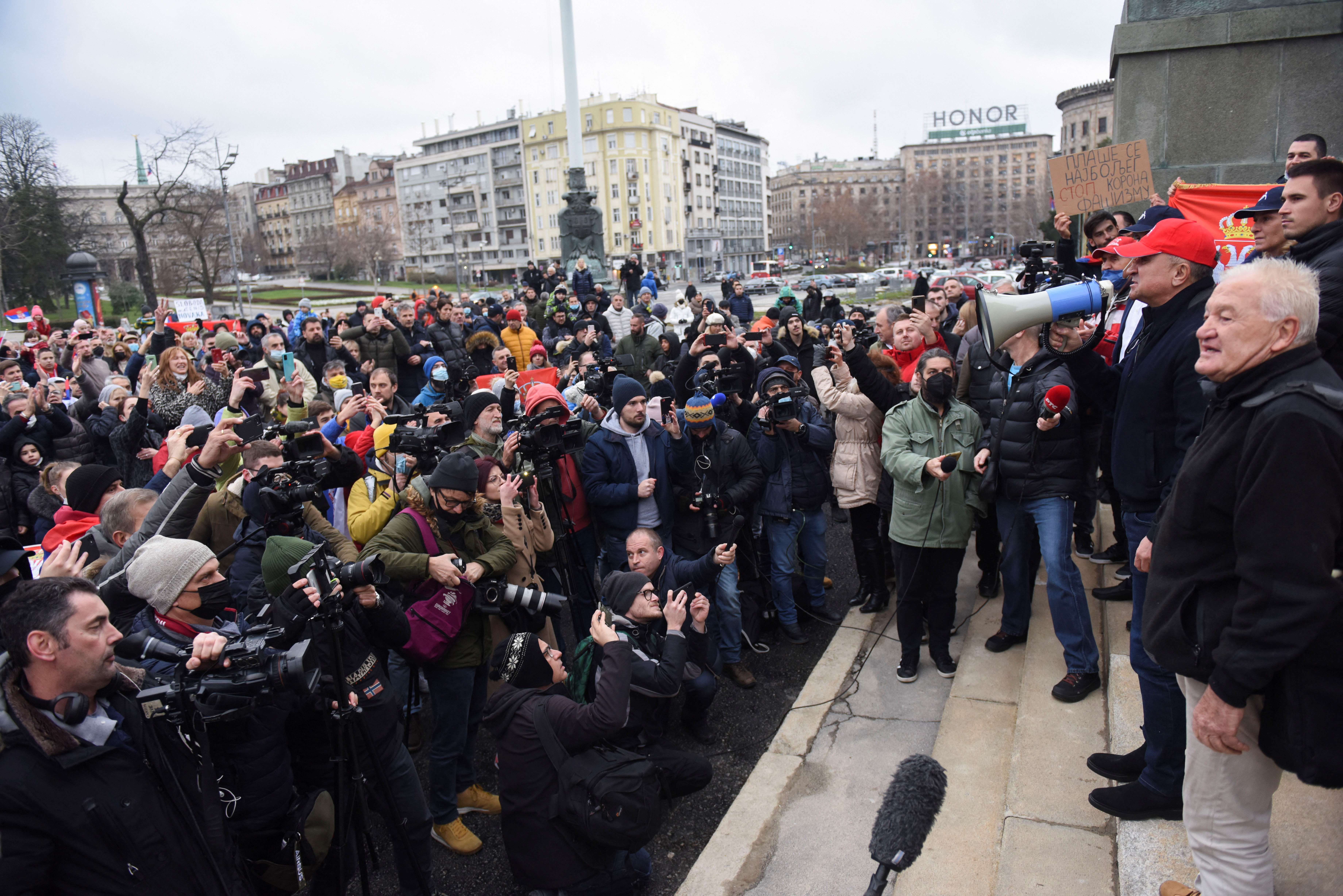 Novak Djokovic's father Srdjan speaks during a protest in front of the National Assembly in Belgrade, Serbia on Thursday. Reuters/Zorana Jevtic

Novak Djokovic's father Srdjan speaks during a protest in front of the National Assembly in Belgrade, Serbia on Thursday. Reuters/Zorana Jevtic

World number one Novak Djokovic on Friday thanked people around the world for their support amid a visa row over COVID-19 vaccines that has seen him being detained at a Melbourne hotel ahead of this month's Australian Open.

"Thank you to people around the world for your continuous support. I can feel it and it is greatly appreciated," he wrote on Instagram.

Djokovic spent Orthodox Christmas in Australian immigration detention on Friday as his lawyers fought a government decision to remove him from the country, which could scupper his shot at a record-breaking 21st Grand Slam.

In a separate development, Czechia's foreign ministry confirmed that Czech women's tennis player Renata Voracova was detained in the same immigration hotel as Djokovic ahead of the Australian Open, which begins on January 17. The ministry told Reuters it had sought an explanation but that Voracova had decided to leave the country.

Border officials detained Djokovic at Melbourne's airport when he arrived on Wednesday and revoked a visa granted on the basis of a medical exemption from Australia's strict COVID-19 vaccination requirements. 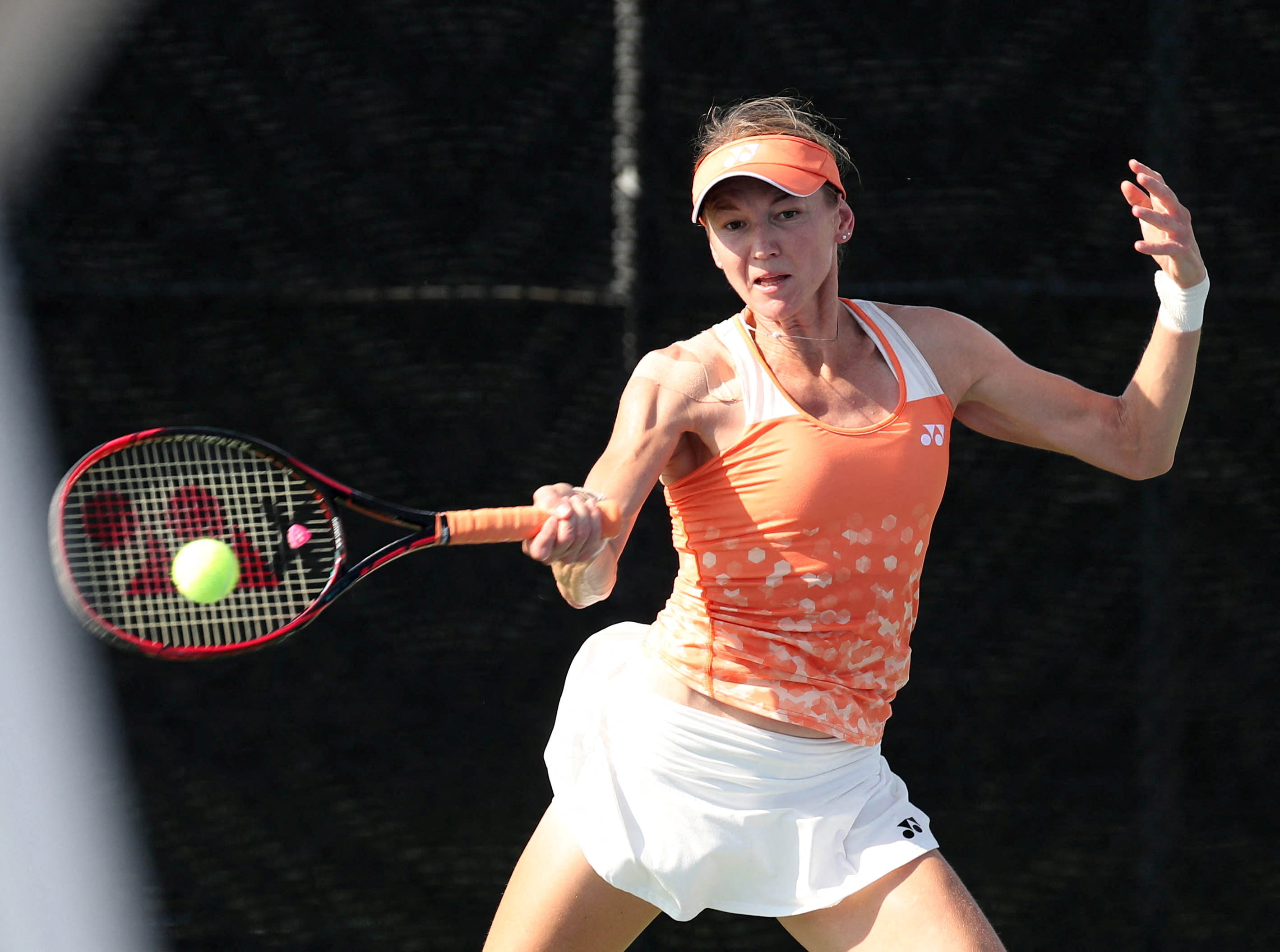 Djokovic's wife, Jelena, posted a photo on Instagram of the couple embracing on a beach to mark Orthodox Christmas, saying: "The only law that we should all respect across every single border is love and respect for another human being."

His family held an emotional news conference at his restaurant in Belgrade on Thursday before protesting in front of parliament, with his father Srdjan saying: "They are stomping all over Novak to stomp all over Serbia."

But the Australian government rejected claims by family and supporters that he was effectively a prisoner.

"He is free to leave at any time that he chooses to do so and Border Force will actually facilitate that," Home Affairs Minister Karen Andrews told reporters.

Djokovic also faced criticism from other tennis stars. Former World Number one and two-time Australian Open champion Boris Becker said Djokovic, who he has coached, was making a big mistake with his anti-vaccination stance.

"It is one that threatens what remains of his career and his chance to cement himself as the greatest player of all time," Becker wrote in the Daily Mail newspaper.

Spanish champion Rafael Nadal told reporters in Melbourne he felt sorry for his rival "but at the same time, he knew the conditions since a lot of months ago."

Australia's Nick Kyrgios said he believed in vaccination "but how we are handling Novak's situation is bad, really bad." 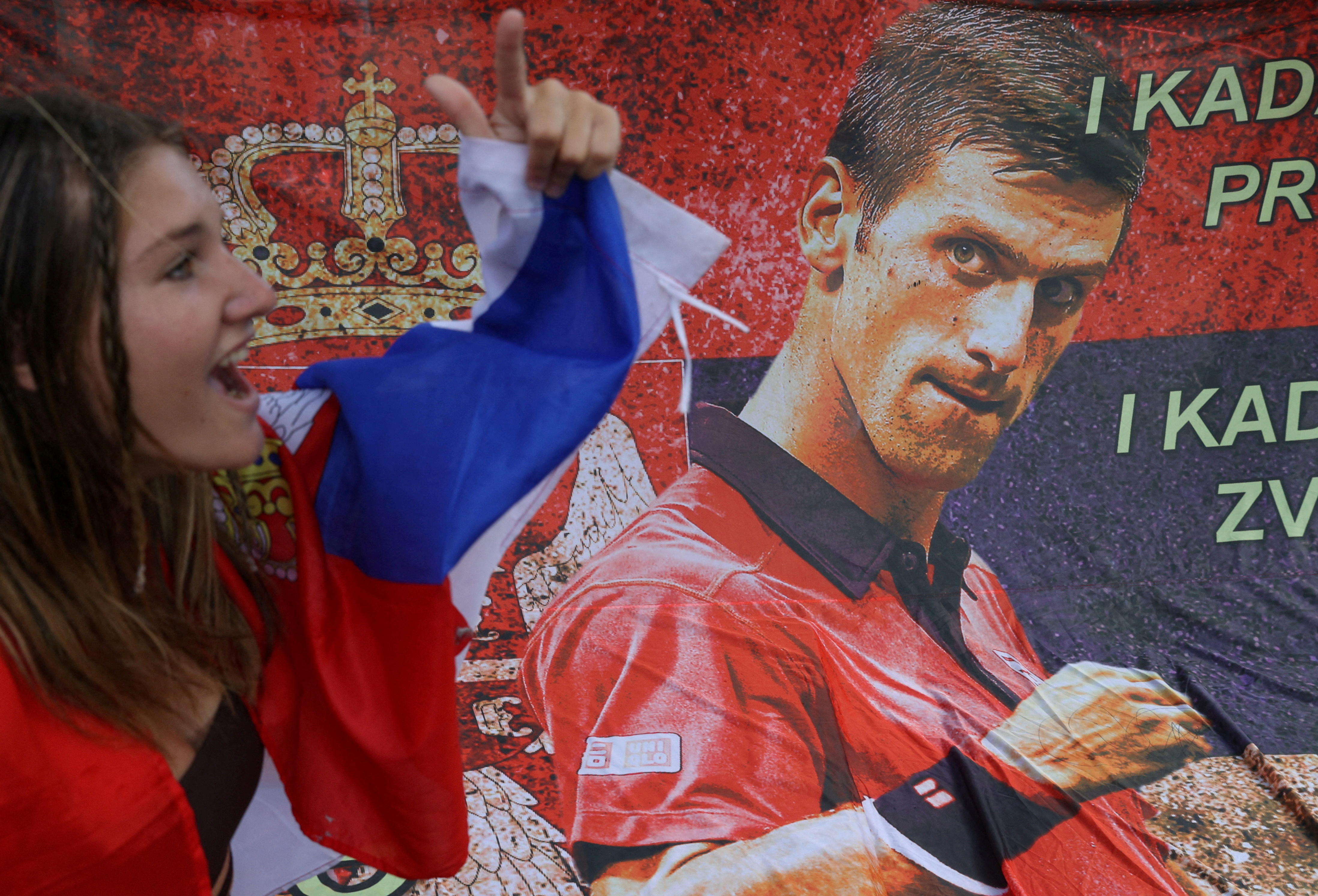 A supporter of Serbian tennis player Novak Djokovic rallies outside the Park Hotel, where he is believed to be held in Melbourne. /Reuters/Loren Elliott

A supporter of Serbian tennis player Novak Djokovic rallies outside the Park Hotel, where he is believed to be held in Melbourne. /Reuters/Loren Elliott

Djokovic's lawyers successfully scrambled for legal approval for him to remain until a full court hearing against the federal government on Monday.

The hearing should reveal more details about the exemption granted to Djokovic and the documentation he provided at the border to support it.

Djokovic had received permission from the state government to enter Victoria without a vaccination, which does not have authority to issue visas to international visitors. While the reason for his medical exemption was not officially released, The Age newspaper reported it was because he had contracted COVID-19 in the past six months.

Tennis Australia and Victoria government officials said Djokovic had received no preferential treatment, adding that he was among a handful of approvals for exemptions in an anonymous and independent assessment of 26 applications.

Tennis Australia has not commented on the matter since Djokovic was detained.

Meanwhile, France's sports minister has said Djokovic will be allowed to play in the French Open later this year even if he is not vaccinated against COVID-19.

France does not bar unvaccinated people from entering its territory but imposes tougher restrictions than on those who have had the shot.

Sports minister Roxana Maracineanu said International Tennis Federation protocols at major events meant an unvaccinated player would be entitled to enter France and participate in the Grand Slam event, which begins in May. 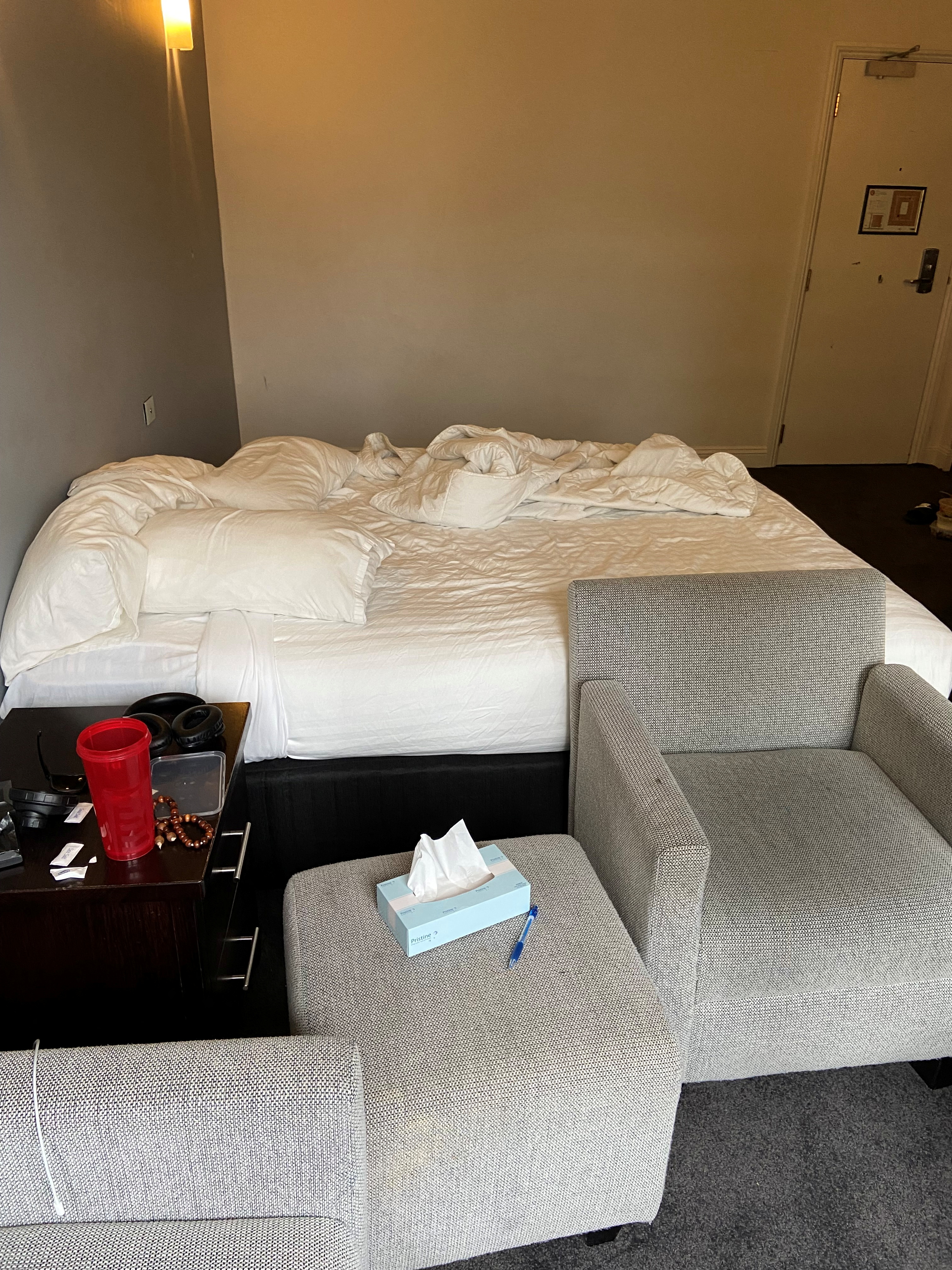 The inside of the bedroom of Hossein Latifi, an asylum-seeker who is detained at the Park Hotel, the same one where Novak Djokovic is believed to be held. /Hossein Latifi/via Reuters

The inside of the bedroom of Hossein Latifi, an asylum-seeker who is detained at the Park Hotel, the same one where Novak Djokovic is believed to be held. /Hossein Latifi/via Reuters

The detention of Djokovic has also drawn attention to the plight of scores of asylum-seekers who are housed in the same Australian hotel being used as a makeshift immigration detention facility.

Some of the group of asylum-seekers have been held at the hotel for almost two years, with several complaining about conditions, including poor catering.

"It's such low quality and we've also been served with maggots and mould in our bread," said Adnan Choopani, an Iranian who was first detained nine years ago when he was 15.

The hotel is also being used to quarantine travellers who have tested positive for COVID-19.

Australia's Border Force did not immediately respond to questions about conditions at the hotel.