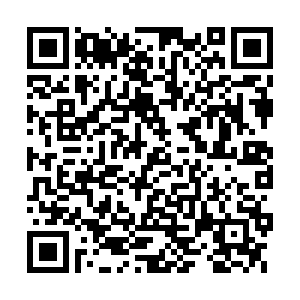 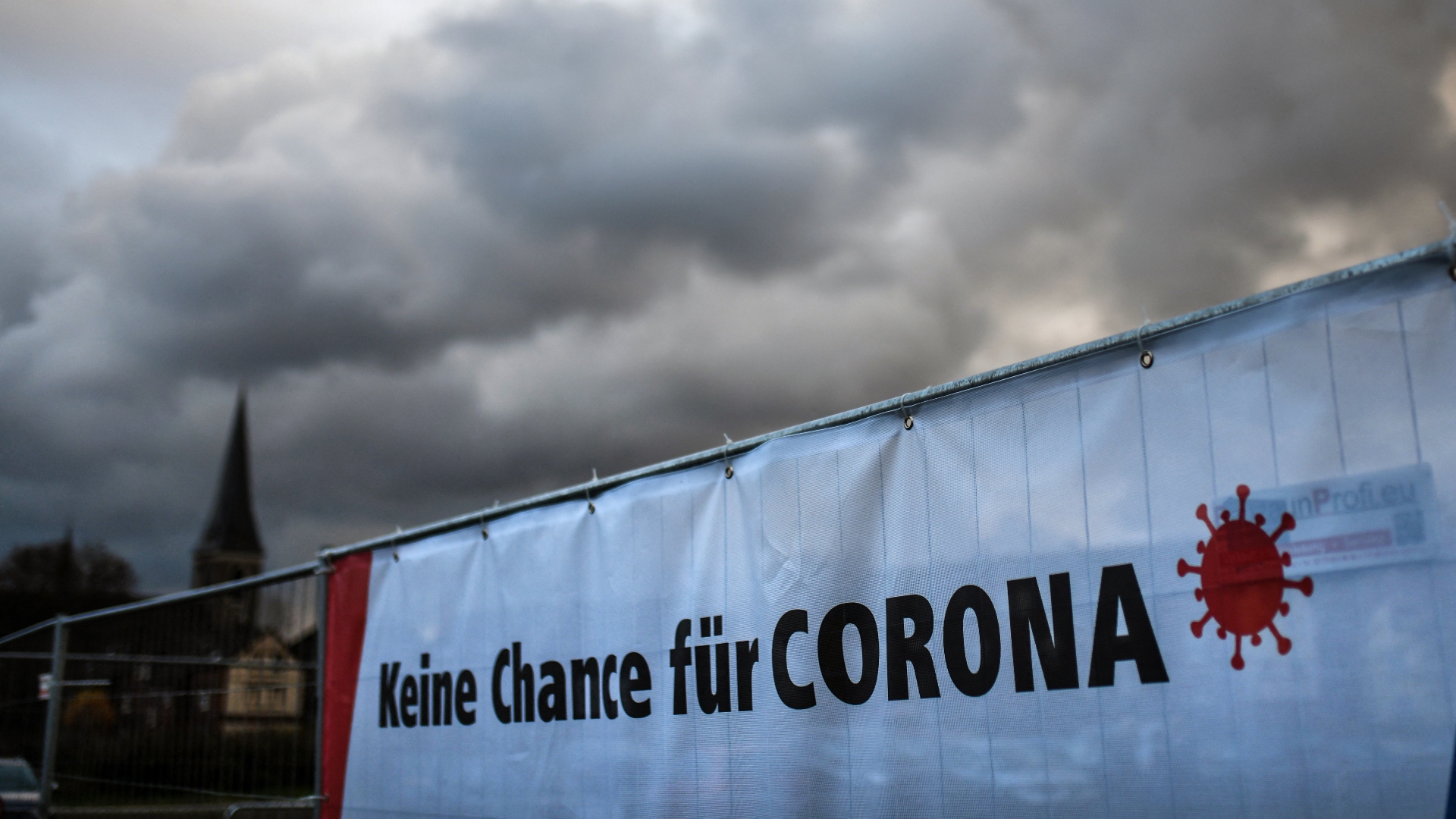 A poster outside a German vaccine center reads 'No chance for Corona' as the country begins a booster campaign. /Ina Fassbender/AFP

A poster outside a German vaccine center reads 'No chance for Corona' as the country begins a booster campaign. /Ina Fassbender/AFP

· Germany's constitutional court has ruled that social-distancing restrictions such as curfews, school closures and contact restrictions are lawful, in a decision that could pave the way for stricter measures. Several of the complaints were made by lawmakers from the business-friendly Free Democrats but the court found the federal government's responses to the virus to be proportionate to the situation.

· Greece's Prime Minister Kyriakos Mitsotakis has made the surprise move of making vaccines compulsory for over-60s, as he faces mounting calls for more restrictions to stem the spread of COVID-19. More than 500,000 Greeks aged over 60 were still refusing to be vaccinated, Mitsotakis said on Tuesday. Those who have not been vaccinated have until January 16 to make an appointment for their first jab and will face a monthly fine of 100 euros ($113.64) if they fail to do so.

· Spain has detected its first case of the Omicron variant in a passenger who had recently arrived from South Africa. The 51-year-old, having flown via Amsterdam, was tested on arrival at Madrid airport on Sunday and was positive, the regional government of Madrid said in a statement. "The patient has light symptoms and is undergoing quarantine," the statement added.

· A Portuguese man and Spanish woman arrested by Dutch border authorities for ignoring quarantine rules say they have been "treated like dogs." Carolina Pimenta and Andres Sanz told Dutch broadcaster RTL they had both tested negative before leaving South Africa, but Pimenta had tested positive on arrival in Amsterdam on the way home to Spain. They have slammed claims they absconded as "ridiculous" and told reporters they had been given permission to leave by a Dutch health authority official and a security guard at the Ramada quarantine hotel.

· As of Tuesday, passengers on public transport and shoppers face a fine in the UK if they are caught without a mask. Assistant Chief Constable Owen Weatherill, of the National Police Chiefs' Council, said officers would engage with people not wearing face coverings and encourage them to do so first. As a last resort people can be fined 200 pounds ($266), reduced to 100 pounds ($133) if paid within 14 days.

· Existing inoculations will struggle against the fast-spreading Omicron variant, the head of vaccine manufacturer Moderna has warned. CEO Stephane Bancel, told the Financial Times that data would be available in two weeks' time, but that he was expecting a "material drop" in the effectiveness of current vaccines.

"All the scientists I've talked to ... are like 'this is not going to be good'," Bancel said.

· In Cricket, the fifth test between Australia and England as part of the Ashes series is in doubt after Western Australia's premier said players and broadcasters must quarantine for 14 days on entering Perth. Melbourne and Sydney have offered to act as replacement venues for the match that is due to begin on January 14. 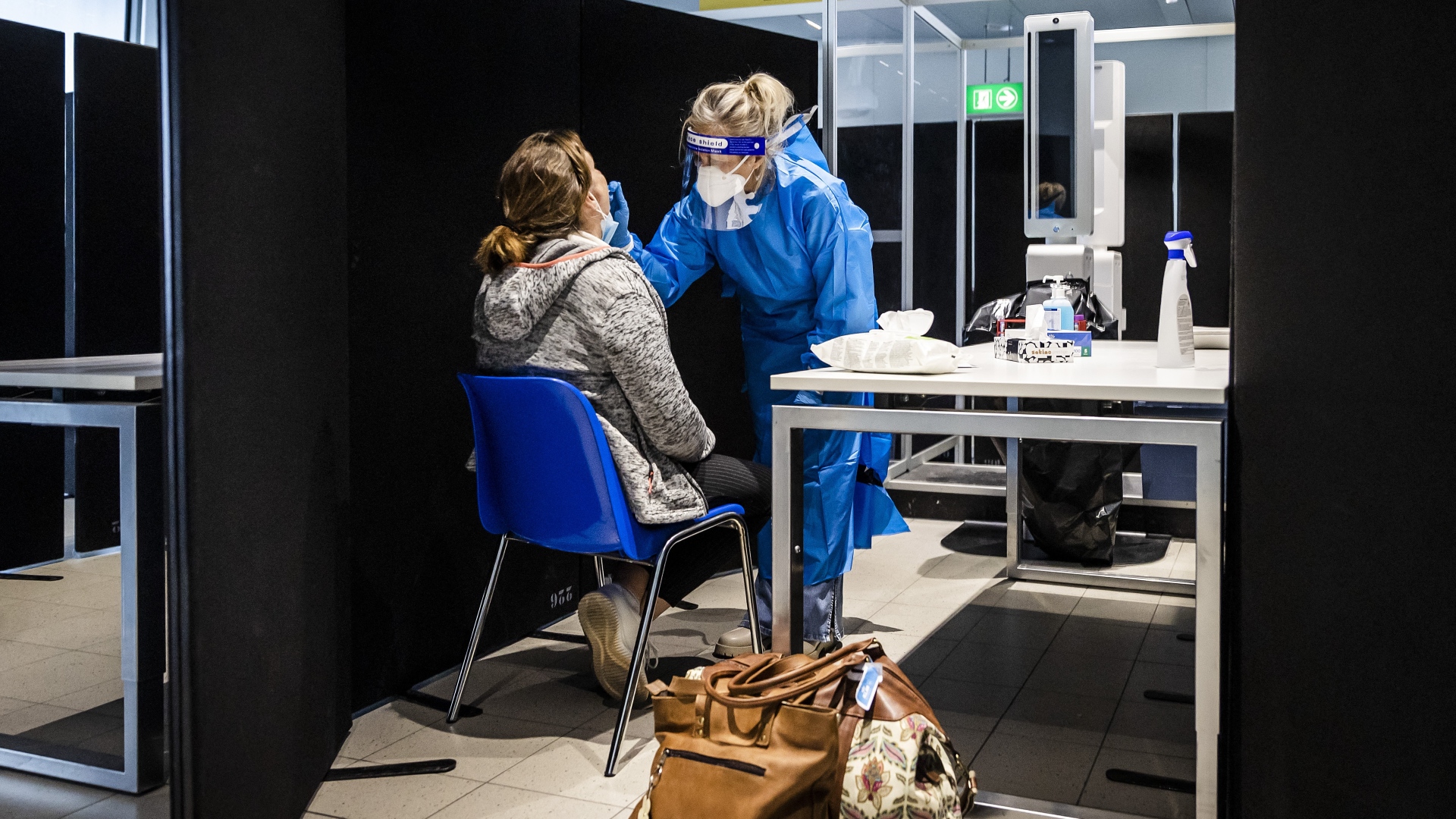 Travelers from South Africa are tested on arrival in a test center at Schiphol airport, in the Netherlands. /Remko de Waal/AFP

Travelers from South Africa are tested on arrival in a test center at Schiphol airport, in the Netherlands. /Remko de Waal/AFP