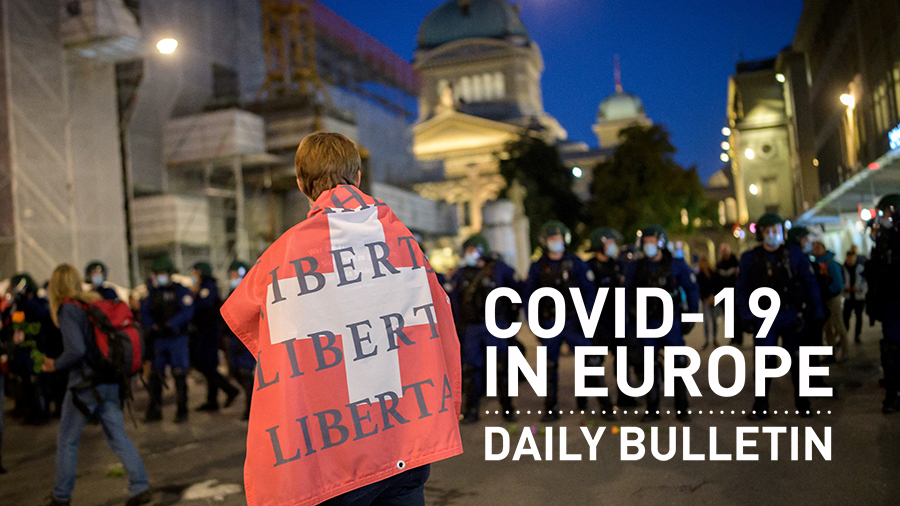 A man holding a Swiss flag reading "Freedom"on his shoulders walks past riot police next to the Swiss House of Parliament during unauthorized protests on Thursday in Bern. /Fabrice Coffrini/AFP

A man holding a Swiss flag reading "Freedom"on his shoulders walks past riot police next to the Swiss House of Parliament during unauthorized protests on Thursday in Bern. /Fabrice Coffrini/AFP

• The World Health Organization (WHO) has recommended the use of Regeneron and Roche's antibody treatment, called Ronapreve or REGEN-COV in the U.S., for patients at high risk of hospitalization and severe illness. The antibody cocktail gained attention when used to treat former U.S. President Donald Trump's last year. It's currently under review by European authorities, while the UK gave it the green light last month and the U.S. has approved it for emergency use. The WHO also called for the company to lower the price of its antibody cocktail and make it available for everyone around the world equitably.

• The pandemic has caused male life expectancy in the UK to drop for the first time in 40 years. According to the Office for National Statistics, a boy born between 2018 and 2020 is expected to live until 79 years old, a drop from the previously estimated 79.2.

• Hundreds took part in unauthorized protests against restrictions, vaccinations and COVID-19 certificates in Bern, Switzerland, on Thursday evening. Similar protests last week led to violent clashes with the police. After a rise in cases in the summer, Switzerland has imposed the mandatory use of COVID-19 certificates, which have been required from September 13 for Swiss residents to access indoor spaces like restaurants, bars and museums.

• Novavax has applied to the WHO to have its vaccine approved for emergency use. The approval could clear the way for the shipping of millions of doses to many poorer countries.

• Portugal will lift all remaining restrictions on October 1, as announced by Prime Minister Antonio Costa on Thursday. That means restaurants and cultural venues will be allowed to welcome guests at full capacity.

• The EU's drug watchdog said it will decide in early October whether to approve boosters of the Pfizer vaccine for those aged over 16. The European Medicines Agency said they will take a decision about administering booster jabs of Pfizer and Moderna for at-risk people and the elderly in the same period.

• A 12-year-old boy in the Netherlands was granted the right to receive the vaccine, which he needed to visit his dying grandmother, despite his father's objections. Children aged 12 to 17 in the Netherlands can choose to be vaccinated but need permission from both parents. In case the parents don't agree, Dutch law says judges can make decisions in the best interests of the children.

• Nobel Prize winners in science and literature will receive their awards in their home countries rather than Sweden because of the uncertainty still posed by the pandemic, organizers announced on Thursday.

• The U.S. Centers for Disease Control has overruled its own health experts' advice, recommending the use of booster jabs not only for Americans aged 65 and older and some adults with underlying medical conditions, but also for workers in high-risk settings.

• Fewer than 4 percent of people in Africa have been fully vaccinated, with most of the doses available in the world having gone to only 10 rich countries. "It is an indictment on humanity that more than 82 percent of the world's vaccine doses have been acquired by wealthy countries, while less than 1 percent has gone to low-income countries," said South Africa's president Cyril Ramaphosa. 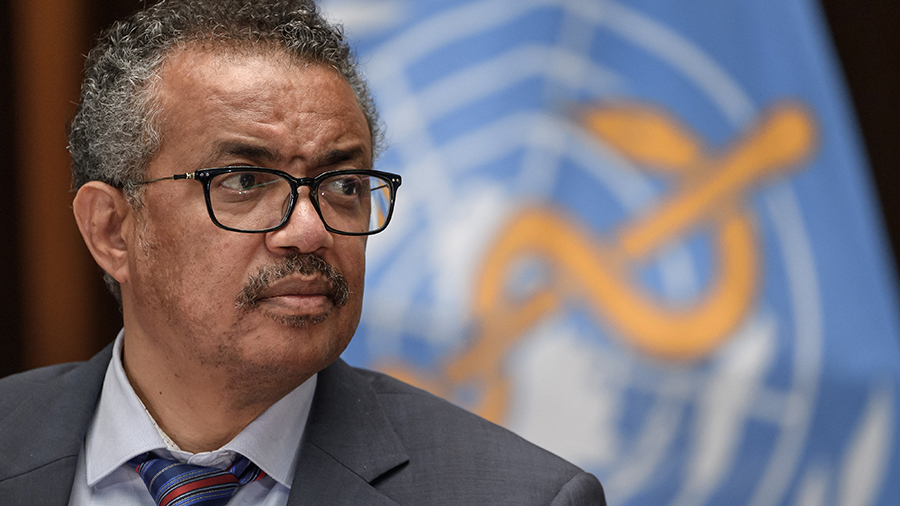 Nearly 20 EU countries nominated Tedros Adhanom Ghebreyesus for a second term as head of the WHO, shortly before the deadline passed on Thursday. /Fabrice Coffrini/POOL/AFP

Nearly 20 EU countries nominated Tedros Adhanom Ghebreyesus for a second term as head of the WHO, shortly before the deadline passed on Thursday. /Fabrice Coffrini/POOL/AFP

CGTN Europe: Will the legacy of COVID-19 be to close the poverty gap?