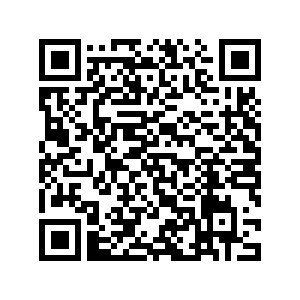 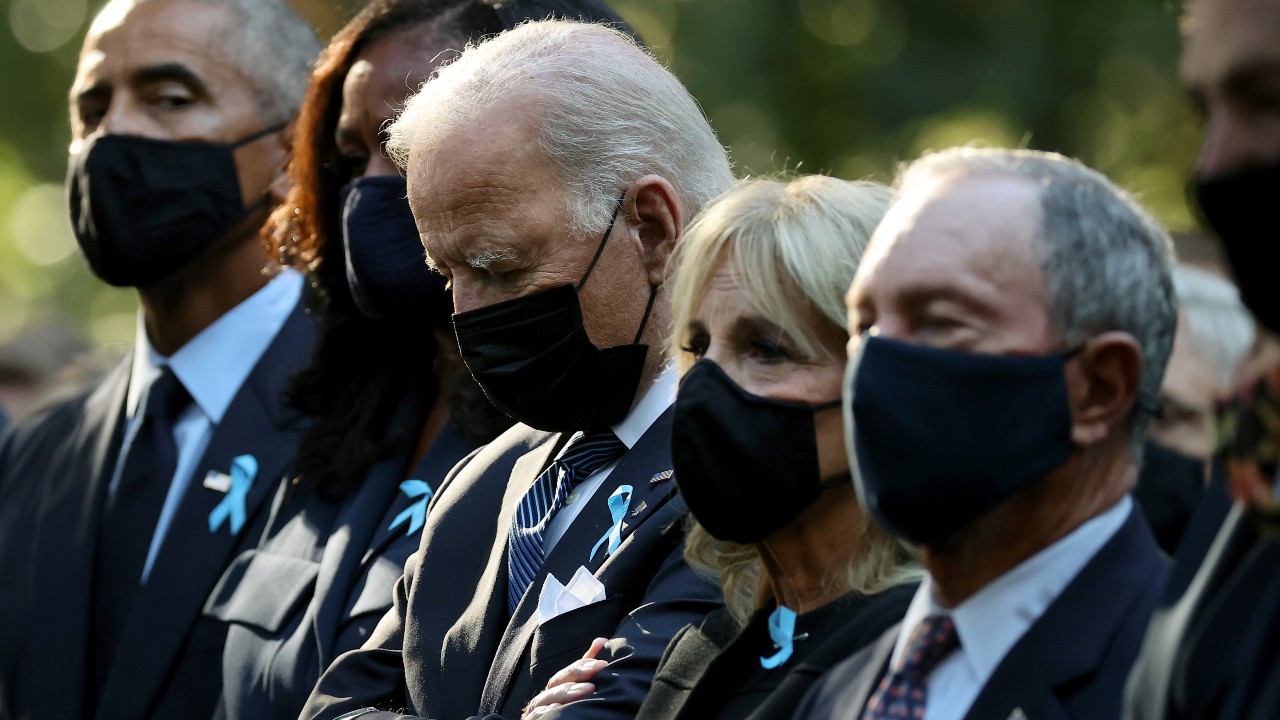 Leaders across Europe and around the world have sent messages commemorating the 20th anniversary of 2001's September 11 terrorist attacks, in which four planes were hijacked and deliberately flown into U.S. buildings, causing thousands of deaths.

European Commission president Ursula von der Leyen tweeted "On 9/11 we remember those who lost their lives and honour those who risked everything to help them. Even in the darkest, most trying of times, the very best of human nature can shine through. The EU stands with the USA in defending freedom and compassion over hate."

"The horrific attacks of #September11 20 years ago changed the course of history. We remember the victims and noble sacrifice of so many first responders and aid workers," added European Council president Charles Michel. "The EU stands by the U.S. and [its president Joe Biden] in the continued fight against terrorism and extremism in all its forms."

National leaders also added their commemorations. Tweeting bilingually in French and English, French president Emmanuel Macron insisted "We will #NeverForget. We will always fight for freedom," with a U.S. flag emoji. The tweet was accompanied by a short film of the U.S. flag flying in France. 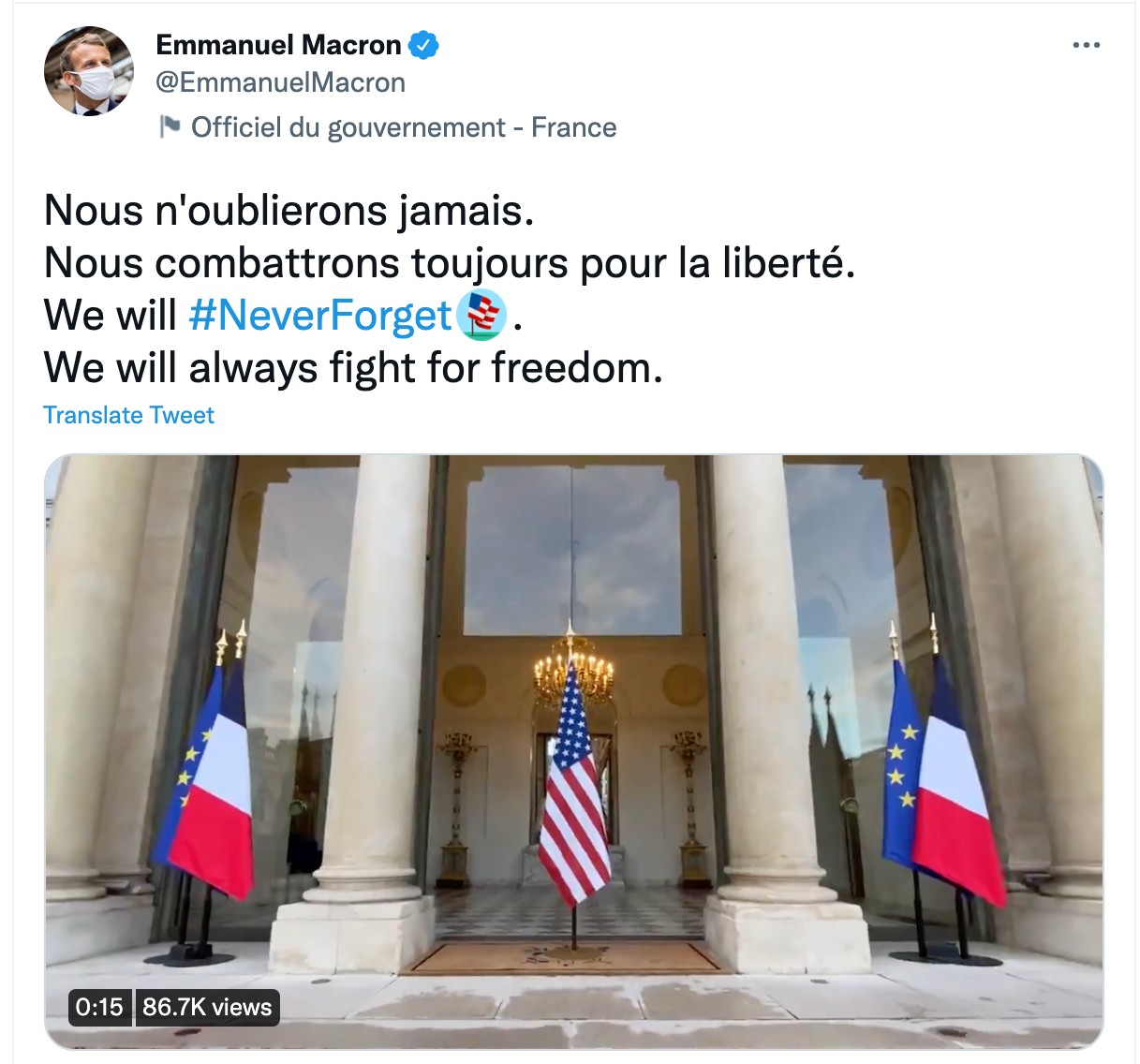 German Chancellor Angela Merkel sounded a warning note that the struggle is far from over, referencing the Western forces' recent withdrawal from a Taliban-controlled Afghanistan.

"We have now had to recognize that although we have been able to defeat terrorism, which is endangering our security, at the present time we have not achieved all our goals," Merkel said in a speech.

"That is why it is important for us on the German side to safeguard what we have been able to achieve, education for girls and the like, although we know that this will not be easy with the Taliban. Above all, bringing citizens in need of protection to Germany and giving them protection is something we feel we have a moral obligation to do."

UK Prime Minister Boris Johnson recorded a three-minute speech for his tweet, in which he insisted that "While the terrorists imposed their burden of grief and suffering, and while the threat persists today, we can now say with the perspective of 20 years that they failed to shake our belief in freedom and democracy. They failed to drive our nations apart, or cause us to abandon our values, or to live in permanent fear." 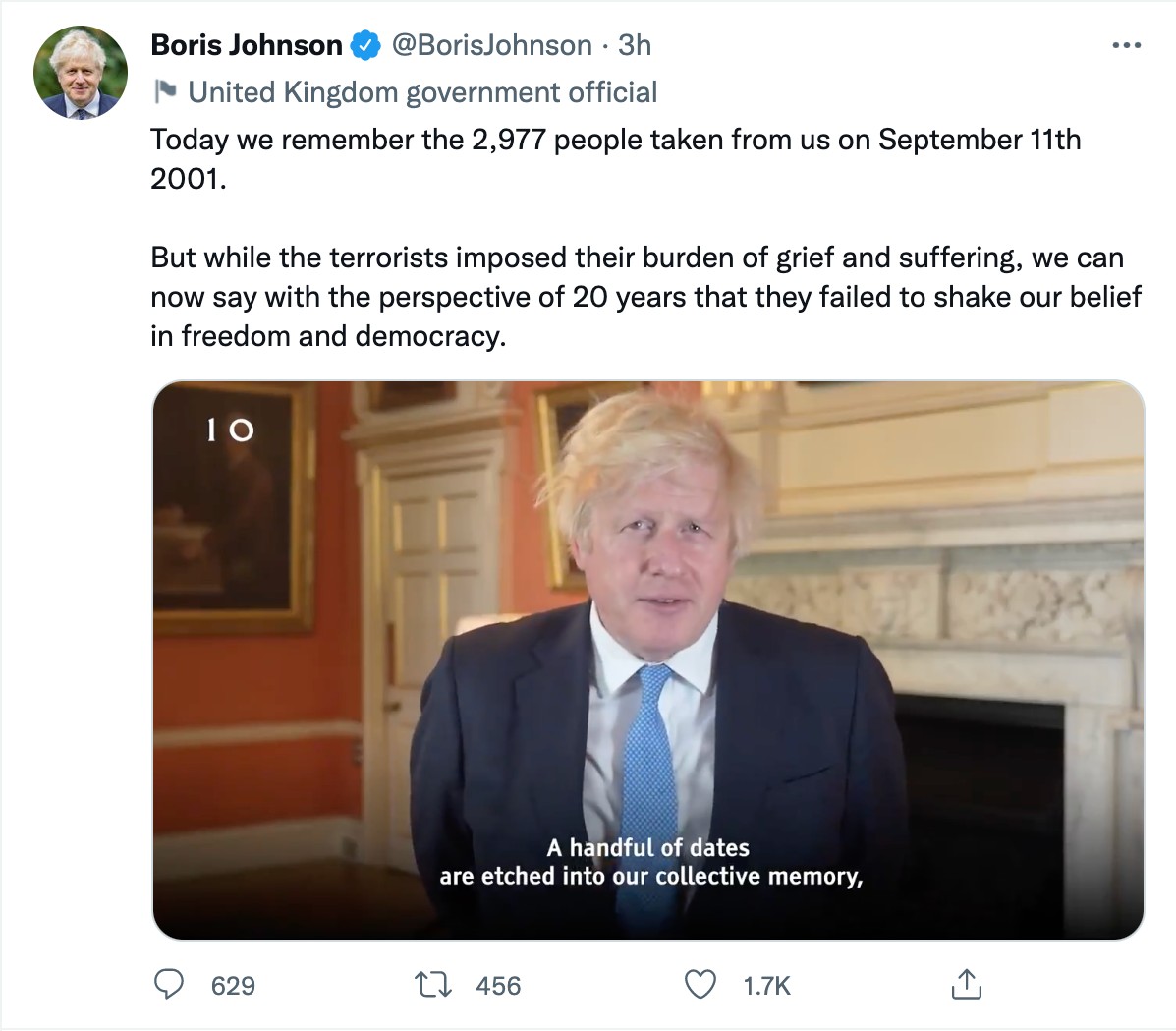 Elsewhere in the UK, the U.S. national anthem was played as a tribute during the changing of the guard at Windsor Castle, while Queen Elizabeth II sent a personal message saying that "My thoughts and prayers — and those of my family and the entire nation — remain with the victims, survivors and families affected, as well as the first responders and rescue workers called to duty.

"My visit to the site of the World Trade Center in 2010 is held fast in my memory. It reminds me that as we honor those from many nations, faiths and backgrounds who lost their lives, we also pay tribute to the resilience and determination of the communities who joined together to rebuild."

Other countries asserted their solidarity with the ongoing fight against terrorism. "Affirming the unconditional rejection of terrorism everywhere and always," said a Swiss government tweet, noting that the country’s president Guy Parmelin "expresses his solidarity with all of its victims."

Similarly, Italian president Sergio Mattarella said "Italy stands in solidarity with the United States and its other allies to counter any terrorist threat."

Writing in an opinion piece, Australian Prime Minister Scott Morrison warned "September 11 reminded us that freedom is always fragile. As Ronald Reagan said, it 'must be fought for and defended constantly by each generation'.

In the U.S. itself, Biden spent the anniversary traveling to ceremonies at each of the three crash sites. Although he did not speak publicly on the day, he released a video on the eve of the anniversary honoring the memories of the victims and those who risked or gave their lives during rescue missions. 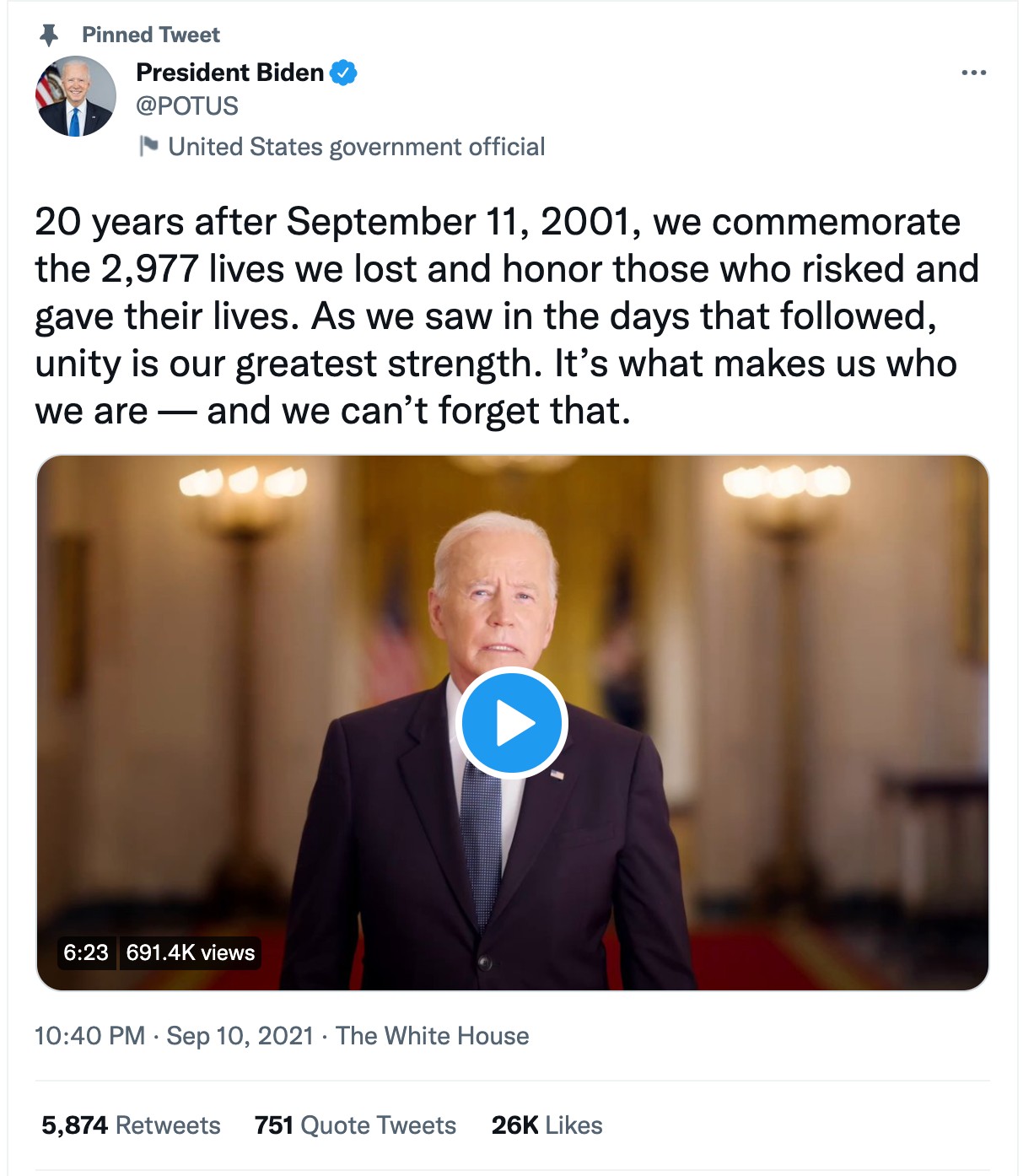 Biden also acknowledged the "darker forces of human nature – fear and anger, resentment and violence against Muslim Americans, true and faithful followers of a peaceful religion" that he said had bent, but not broken, American unity.

"To me, that's the central lesson of September 11, is that at our most vulnerable, in the push and pull of all that makes us human, and the battle for the soul of America, unity is our greatest strength," he said.

"Unity doesn't mean we have to believe the same thing. We must have a fundamental respect and faith in each other, and in this nation."

Former president Barack Obama, for whom Biden served as vice-president, tweeted "Today we honor the nearly 3,000 men, women, and children who died on September 11, 2001, and the heroes who have always run towards danger to do what's right. Let's never forget that day, and let's never take them for granted." 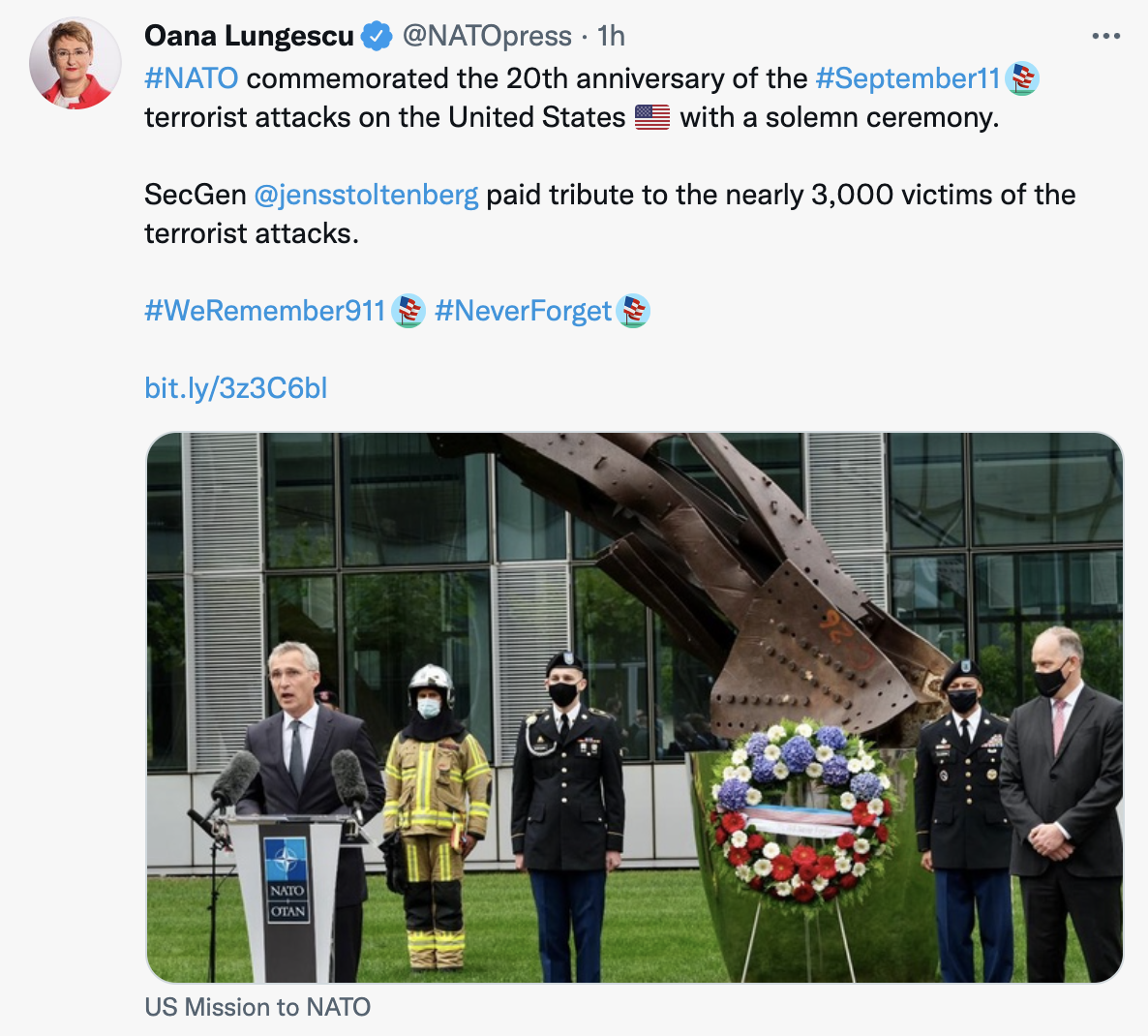 Europe reminded of its own wave of attacks (by Giles Gibson)

In the wake of the 9/11 attacks, European nations have gone through their own horrifying terror attacks and marked their own somber anniversaries.

In July 2005, a series of attacks on London's public transport left 56 people dead. In November 2015, 130 people died in Paris when gunmen and bombings hit a sports stadium, a music venue and several restaurants and bars.

Like the U.S., countries in Europe are also still grappling with the aftermath of these acts of terror. A trial that's expected to last nine months has just kicked off in France, with 20 defendants suspected of involvement in the 2015 Paris attacks.

A court artist's impression of a terror suspect in the 2015 Paris attacks. /Reuters

A court artist's impression of a terror suspect in the 2015 Paris attacks. /Reuters

The events of 9/11 also led to tension between European nations and the United States. While German, French and other European troops were involved in the invasion of Afghanistan in 2001, Germany and France publicly opposed the Iraq War two years later.

More recently, the U.S. withdrawal from Afghanistan has forced the European Union to take a close look at its own military capabilities.

The European Union's High Representative for Foreign Affairs, Josep Borrell, described the chaotic withdrawal as a "wake-up call" for the bloc.

"As a global economic and democratic power, can Europe be content with a situation where we are unable to ensure, unassisted, the evacuation of our citizens and those under threat because they have helped us?" asked Charles Michel, the President of the European Council.

Senior E.U. leaders are now calling for the bloc to set up a rapid-reaction military force, a debate that could rumble on for months.