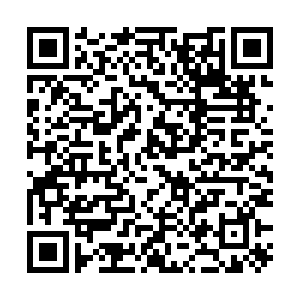 The Taliban is back. Sooner, and more overwhelmingly, than most international observers imagined, and sooner than even U.S. President Joe Biden – who ultimately signed off the hasty withdrawal of American troops from the country – was expecting.

The words allegedly spoken by a Taliban commander during the War in Afghanistan, reported by Canada's former Chief of the Defense Staff Rick Hillier, "You have the watches, we have the time," sounded to many hauntingly prophetic in the wake of the Taliban's inexorable conquest of the country.

The Taliban is back in power, as it was 20 years ago, but what has changed since then? For European governments and many others a key question is whether Islamist terrorists will again use Afghanistan as a base in the way al-Qaeda did in preparation for the 9/11 attacks in the U.S.. 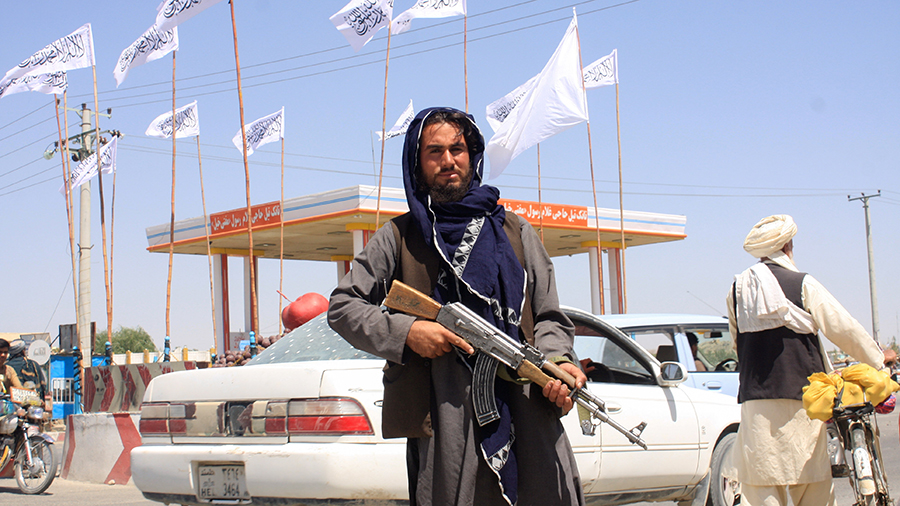 A Taliban fighter looks on as he stands at the city of Ghazni, Afghanistan on August 14. /Reuters/Stringer

A Taliban fighter looks on as he stands at the city of Ghazni, Afghanistan on August 14. /Reuters/Stringer

When the Taliban took power in the country for the first time in 1996 following a brutal civil war, Afghanistan became a safe haven for the terrorist group led by Osama bin Laden, which was able to host its training camps there.

The Taliban's oppressive rule over the Afghan people lasted for five years, until U.S. and UK troops removed the group from power in 2001, following the attack on the World Trade Center by al-Qaeda terrorists.

The Taliban leaders and militants were forced to scramble and seek shelter in Pakistan's mountains, where they had remained until a few weeks ago.

Since the fall of Kabul on Monday, the Taliban spokesmen and front men have been trying to tell the world how the insurgent group is not quite the same today as it was 20 years ago.

But it's hard to shake off the concern that the Taliban might install in Afghanistan just as brutal and repressive a government as ruled in the years from 1996 to 2001 – and host a resurgence of terrorism in the region.

Jens Stoltenberg, secretary general of NATO, made clear that was a key concern on Monday, when he said the alliance will remain on alert for signs that terrorist groups are regrouping in Afghanistan and could strike them from a distance if they try to re-establish themselves there.

"Those now taking power have the responsibility to ensure that international terrorists do not regain a foothold," he told reporters in Brussels. 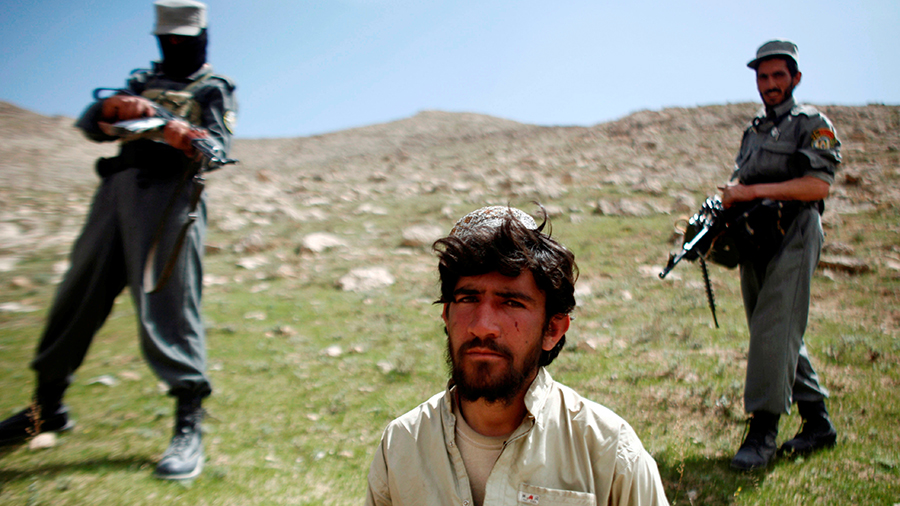 Afghan policemen stand next to a captured Taliban fighter after a gun battle near the village of Shahjoy in Zabul province, Afghanistan March 22, 2008. /Reuters/Goran Tomasevic/File Photo

Afghan policemen stand next to a captured Taliban fighter after a gun battle near the village of Shahjoy in Zabul province, Afghanistan March 22, 2008. /Reuters/Goran Tomasevic/File Photo

The United Nations Security Council, during an emergency meeting called on Monday, also expressed concern that Afghanistan might become once again a breeding ground for global terrorism under the Taliban.

UN Secretary-General Antonio Guterres then called on the international community to "use all tools at its disposal to suppress the global terrorist threat in Afghanistan."

Islamist terrorism today is not  the same as when it was started in the 1990s – and whether the Taliban will support or restrain al-Qaeda is still unclear. 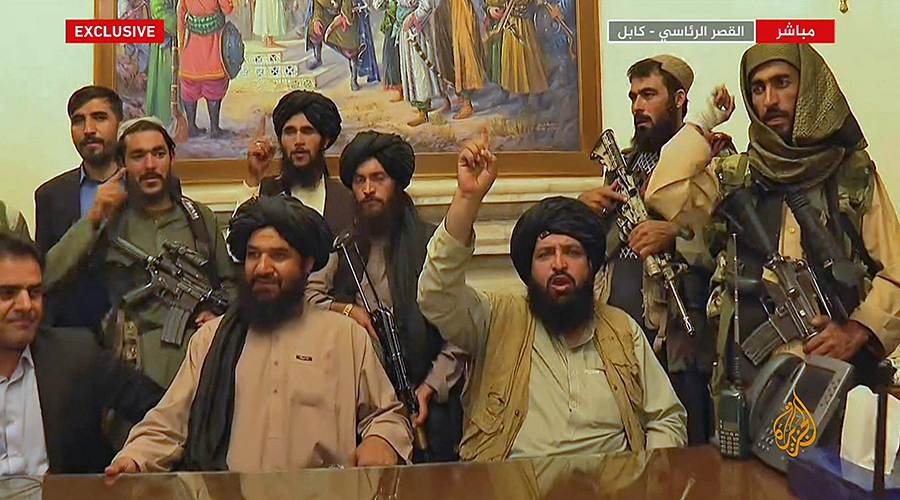 A screen-grab taken from Qatar-based Al-Jazeera television on August 16, shows Taliban members taking control of the presidential palace in Kabul after Afghanistan's president flew out of the country. /Al Jazeera/AFP

A screen-grab taken from Qatar-based Al-Jazeera television on August 16, shows Taliban members taking control of the presidential palace in Kabul after Afghanistan's president flew out of the country. /Al Jazeera/AFP

Will the Taliban host terrorists again?

As part of the 2020 peace agreement with the U.S., the Taliban agreed to prevent terrorist groups from using Afghanistan as an operating ground and sever ties with al-Qaeda.

But Sajjan Gohel from the Asia Pacific Foundation says the Taliban is just as close to the terrorist group as it was 20 years ago.

"Whatever they say publicly through their media-savvy propaganda, they retain very strong ties with al-Qaeda," Gohel says.

They have not relinquished or ended those ties with al-Qaeda
-  Sajjan Gohel, the Asia Pacific Foundation

A report published in June by the United Nations monitoring the situation in Afghanistan stated that, at the time, "a significant part of the leadership of al-Qaeda" was living in the Afghanistan and Pakistan border region, while "large numbers of al-Qaeda fighters and other foreign extremist elements aligned with the Taliban" were located across the country.

It also established that "ties between the two groups" remained "close, based on ideological alignment, relationships forged through common struggle and intermarriage," and that, despite the Taliban tightening its control over Al-Qaeda, it certainly could "easily and quickly reverse" that course of action. 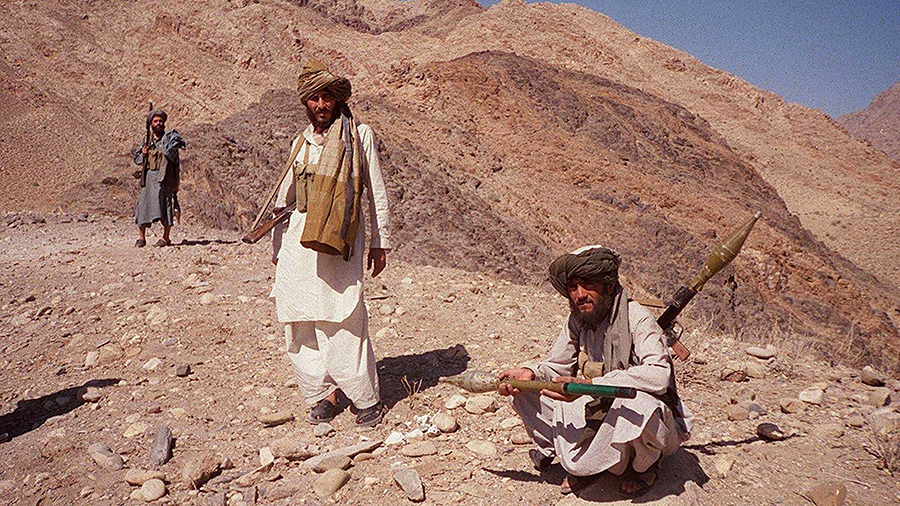 Taliban fighters posing on a hilltop near Jalalabad in October 2001, a week after U.S. President George W. Bush launched his 'War on Terror' in response to the 9/11 attacks. /Tariq Mahmood/AFP

Taliban fighters posing on a hilltop near Jalalabad in October 2001, a week after U.S. President George W. Bush launched his 'War on Terror' in response to the 9/11 attacks. /Tariq Mahmood/AFP

According to Gohel, a potential return of al-Qaeda is "not going to happen overnight."

As  happened in the cases of Afghanistan in the 1990s, Syria after the Arab Spring or Iraq following the decision of President Barack Obama to withdraw U.S. troops, Gohel explains, extremist forces will emerge with time, gaining power, influence and control and increasing in their numbers.

"For al-Qaeda, this is the perfect opportunity now to regain a strategic foothold in Afghanistan, but there are also the unknowns," he adds, warning of the possibility that new terrorist groups could emerge – as so-called Islamic State (ISIL) emerged from the wars in Iraq and Syria.

But the Taliban appears to be seeking legitimacy for its regime and some experts suggest it won't make the same mistake of harboring terrorist groups again, after that same decision led it to lose hold of the country before.

"It really depends on the pragmatism within the movement of the Taliban, because they openly declare that they are trying to keep away the world's jihadists from the Afghani territory," says Josef Kraus, associate professor at Masaryk University in Czechia.

Problems could potentially rise if fighters and extremists within the Taliban exercise pressure on the leadership for more radical actions.

"It is somehow possible that this pragmatic ... leadership might be replaced by extremists from the bottom, because if you really try to find extremists within the Taliban, these are the field fighters at the bottom. And if they put enough pressure to change the leadership they can make it less pragmatic, more ideological or religious," adds Kraus.

Are Western democracies ready to fight a new terrorism threat?

Biden said on Monday that the U.S. will maintain an "over-the-horizon" counterterrorism capability in the future that will allow the country's intelligence to keep an eye on possible direct terrorist threats in Afghanistan.

But many have raised doubts over whether the U.S. will be able to actually assess potential threats without intelligence-gathering operations on the ground.

"There are not so many cards in the hands of the West now to prevent such a [terrorist] threat," says Kraus.

"[Its] mainly now the intelligence operations and definitely the cooperation with local actors, like Pakistan or maybe Iran – which is somehow possible for European states, but definitely not for the United States."

Meanwhile, other politicians have made the same pledge. UK Prime Minister Boris Johnson also said on Monday that his country will work with the UN Security Council and other NATO countries to prevent Afghanistan from "lapsing back into terror." 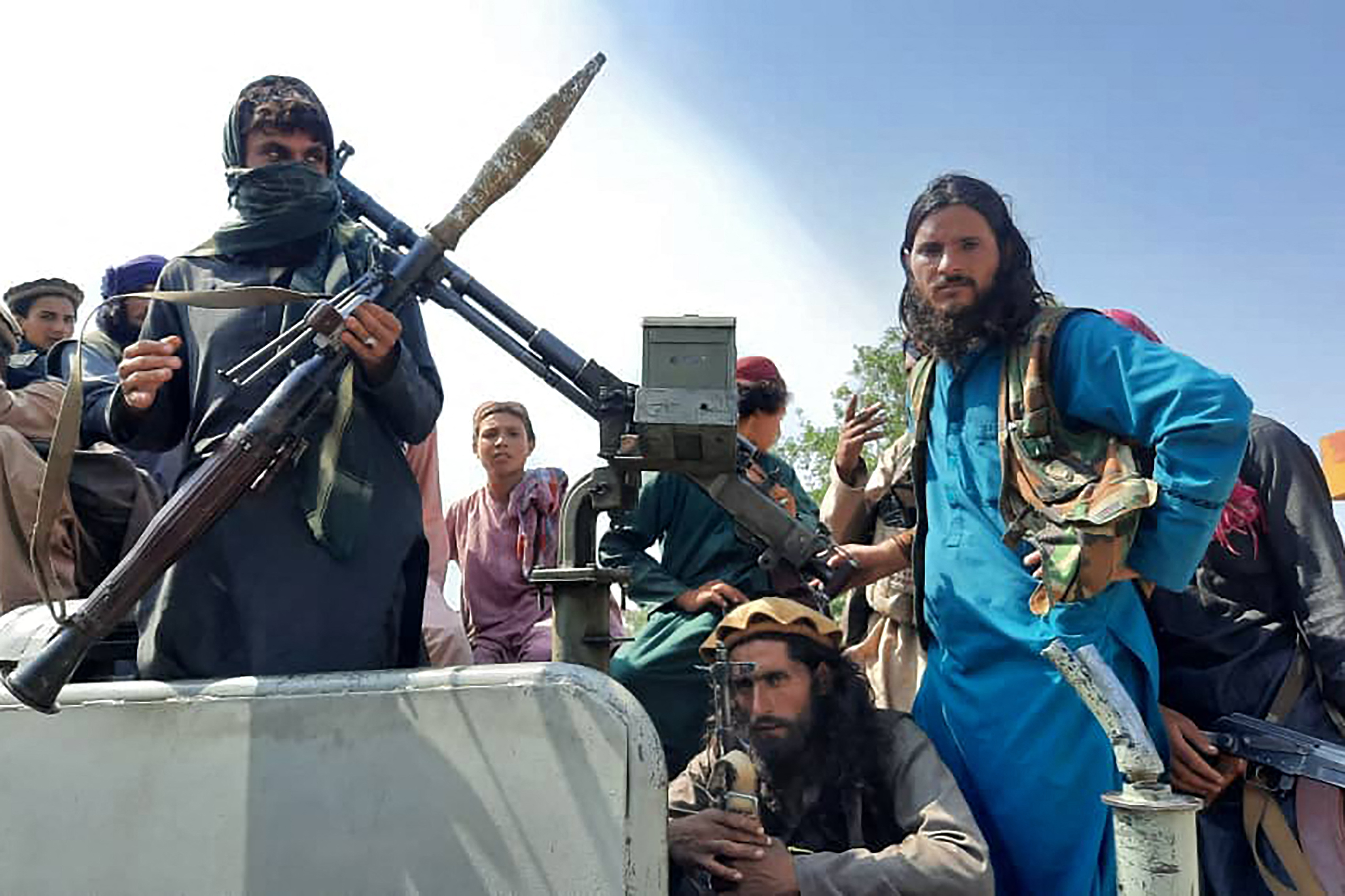 Taliban fighters on a street in Laghman province on August 15. /AFP

Taliban fighters on a street in Laghman province on August 15. /AFP

But the threats stemming from the region are potentially more complex than monitoring the Taliban's actions alone.

"I think the the West is going to have to prepare for the potential of transnational terrorism to re-emerge from Afghanistan and, in context to Afghanistan, Pakistan, too," says Gohel.

"But as I said earlier, it's not just the West that has to be worried about this. Other countries, globally, should be – and that includes China."

China – which shares a 75km-long border with Afghanistan – wants good relations with the new government but wants to ensure the Taliban does not offer support to terrorists targeting its Xinjiang Uygur Autonomous Region.

Several attacks in China between the 2000s and 2010s were attributed by the Chinese government to the East Turkestan Islamic Movement or ETIM, which allegedly has ties with Al-Qaida.

There's a possibility China may handle the situation in a more diplomatic way than other nations potentially threatened by the rise of the Taliban in the region.

But at the same time as Zhao Lijian proclaimed the Chinese friendship to all Afghan people, he said China hopes the Taliban will "will resolutely crack down on all kinds of terrorist forces, including the ETIM."

Currently there are several active jihadist groups worldwide, in sub-Saharan Africa, Mozambique, Somalia and the Democratic Republic of Congo. But an area of major concern, according to Gohel, remains Pakistan.

Recently, many militants who have conducted attacks in Europe had traveled to Pakistan, where they had received training and were also allegedly radicalized.

The violent Pakistani Taliban, or TTP, known for the massacre of 150 people in an attack at a school in Peshawar in 2014, could have only been galvanized by the victory of the Taliban in Afghanistan – and that could mean a resurgence of attacks on Pakistani military and civilian targets.

"This is a problem that is like a virus," explains Gohel.