· The president of Tunisia froze the country's parliament and ousted the government days after protests over a rise in cases and anger about political dysfunction. The move seems to be backed by the army, but critics have called it a coup.

· Low-cost airline Ryanair has reported a $321 million loss in the first quarter. CEO Michael O'Leary blamed it on Easter flight cancellations and the "slower-than-expected easing of EU government travel restrictions into May and June." He added that there could be an increase in demand by September, as large parts of Europe will be fully vaccinated.

· London's Heathrow Airport has called on the government to ease travel restrictions for vaccinated passengers to catch up with the rest of Europe. "The UK ... is falling behind its EU rivals in international trade by being slow to remove restrictions," said Heathrow CEO John Holland-Kaye. The airport used to be the busiest in Europe and it has suffered a $4 billion loss because of the pandemic.

· The U.S. government's infectious diseases expert Anthony Fauci said on Sunday that some Americans may need vaccine booster shots as cases rise and the Delta variant spreads. He added that health officials are also considering whether to revise mask guidance for vaccinated Americans, saying it was "under active consideration."

· The Netherlands' rowing team is self-isolating in Tokyo and two Dutch tennis players have pulled out of the Olympics because of new cases. Despite restrictions, the pandemic has greatly impacted the Games. So far, 16 athletes have tested positive and, overall, there have been 148 Olympics-related cases in the country.

· Vaccine passports may soon become a constant presence in French life, as the country's parliament voted to extend the president's decree to make health passes mandatory in some places. The new legislation would make the pass compulsory to visit restaurants or cafes and even to travel on inter-city trains. But it still needs to be approved by the country's Constitutional Council before it becomes law and sparked protests at the weekend.

· People in Ireland are now allowed to eat indoors at hospitality venues if they have been vaccinated, or have recently recovered from the virus. An estimated 68 percent of adults in the country have been fully vaccinated, but hospitalizations are also steadily increasing.

· China reported 76 new cases, prompting authorities to test millions of people. The country has a zero-risk approach to the pandemic and it has shut down enter cities because of the emergence of small clusters. The new cases reported on Monday accounted for the highest daily tally since January and 40 were domestic transmissions, causing more concern.

· Cases in Germany could soar to around 100,000 a day in the next couple of months if more people do not get vaccinated, according to Chancellor Angela Merkel's chief of staff. He also suggested imposing restrictions on people who refuse the jab. 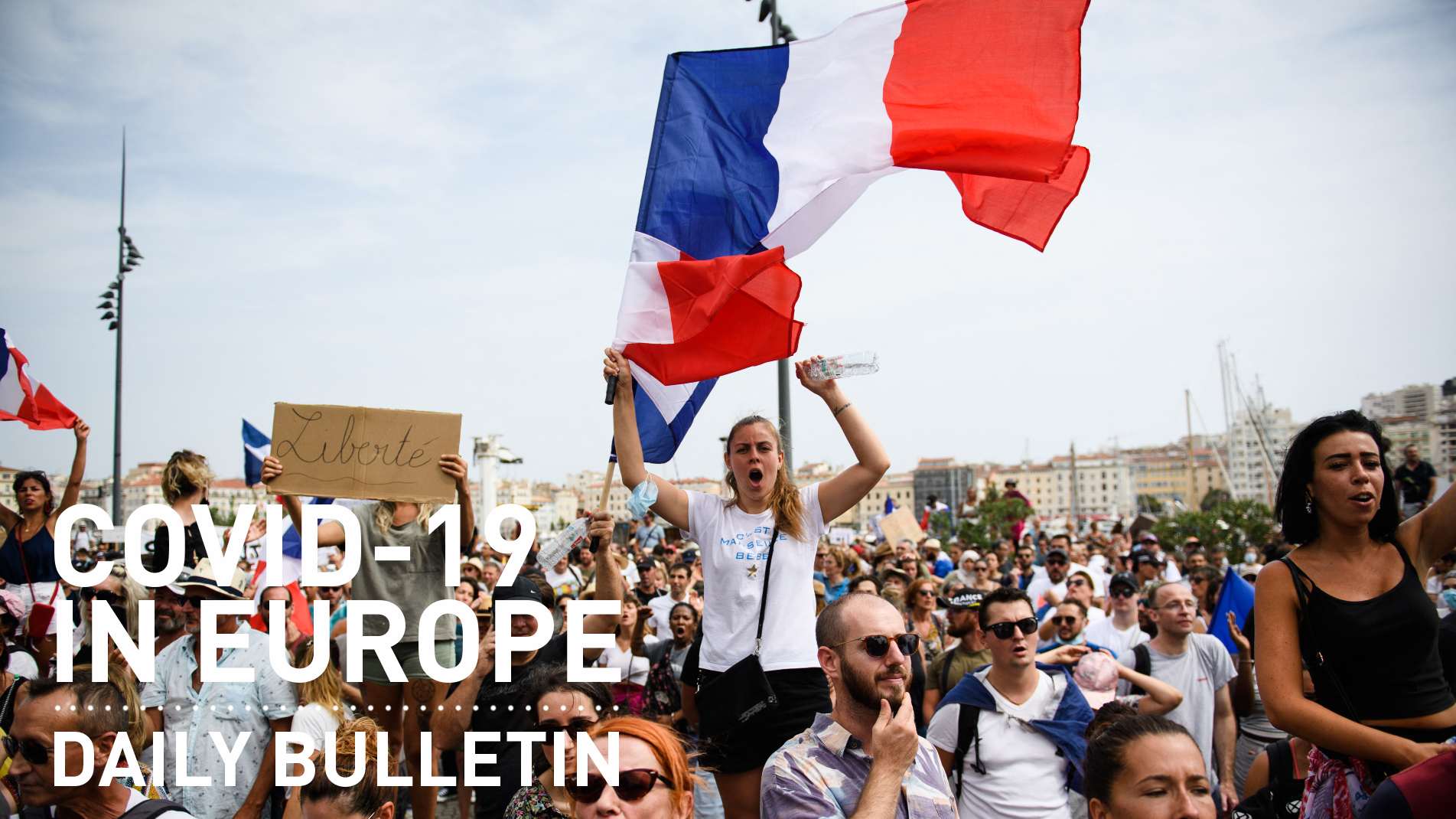 A protest in Paris against mandatory a health pass and compulsory vaccination for some workers. /AFP/ Clement Mahoudeau

A protest in Paris against mandatory a health pass and compulsory vaccination for some workers. /AFP/ Clement Mahoudeau

A policy spokesman for Germany's Social Democratic Party (SPD) has spoken out against stricter restrictions for non-vaccinated people, saying the unequal treatment would be "questionable under constitutional law."

Other politicians are also voicing opposition to compulsory vaccination, such as the country's justice minister, who also questioned the legality behind mandatory jabs.

These comments follow those from Germany's chancellery minister, who hinted at possible restrictions for people who do not get vaccinated.

Meanwhile, a further 958 new infections were reported to the Robert Koch Institute since yesterday. Three more people have also lost their lives in Germany because of the virus, bringing the total number of deaths in the country since the pandemic started to 91,527.

Hungarian data show no new deaths were reported over the weekend, but cases are slowly rising, with 161 cases recorded from Friday to Monday.

Poland's ministry of health has provided data on the number of healthcare workers infected and killed since the pandemic began. Overall, 231 doctors and 188 nurses have lost their lives, along with 50 dentists, 22 midwives, 19 pharmacists, six physiotherapists, six paramedics and five laboratory diagnosticians.

A mask mandate has been reintroduced in some busy shopping streets in the Brussels municipality of Etterbeek.

The local mayor said it is necessary because of a spike in new infections, which is "greater than what we experienced in January after the Christmas holidays." The average number of new daily infections has surged to more than 1,300 a day in the past week, nearly quadruple the number of cases a month ago.

Deaths remain low for the time being, with an average of 1.4 people dying a day. But hospital admissions are climbing, up 14 percent in the past week. More than 51 percent of the Belgian population is now fully vaccinated, while nearly 83 percent of the adult population has received at least 1 dose of a vaccine.

The number of new infections being officially recorded in the UK is continuing to fall. On Sunday, 29,173 tested positive for the virus, down from more than 48,000 a week earlier.

It was the fifth day in a row cases have fallen, despite the government expecting a sharp rise in the coming weeks as England lifted almost all its restrictions on July 19.

The exact reasons for the drop remain unclear, but scientists have called for caution given that data usually have a two to three-week lag.

Senators approved the government's legislation to bring in obligatory vaccination for healthcare workers and the health pass, which will be checked on entrance to bars and restaurants, theaters and cinemas, sports centers and museums to make sure all visitors are either vaccinated or have recently tested negative.

The text of the bill was heavily amended from the original version of the proposed legislation.

Health-pass checks begin in cafes and bars from the start of August.

The health pass will not be needed in essential stores (supermarkets and pharmacies). Restaurant owners who do not carry out health-pass checks will not be fined but will instead face administrative sanctions.

Other sections of the law concern children aged over 16 who will now be able to get vaccinated without their parents' consent. Also, people who were infected and have to self-isolate at home for 10 days will not be checked by the police but instead by social security workers.

CGTN Europe: Is the world ready to leave COVID-19 lockdown behind?