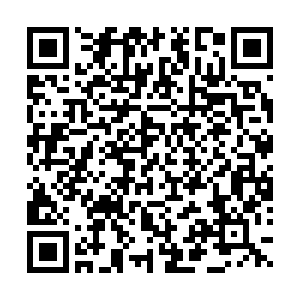 If the European Union is to achieve its ambitious goal of becoming a carbon-neutral economy by 2050, as the bloc announced on July 14, one of the main challenges it will have to face is how to decarbonize transport.

The sector currently accounts for 22 percent of the bloc's total emissions, with aviation being solely responsible for 13.9 percent of these CO2 emissions.

Within this context, the European Commission's claim to be able to save up to 10 percent of aviation's emissions by simply improving air traffic management seems quite an easy win. 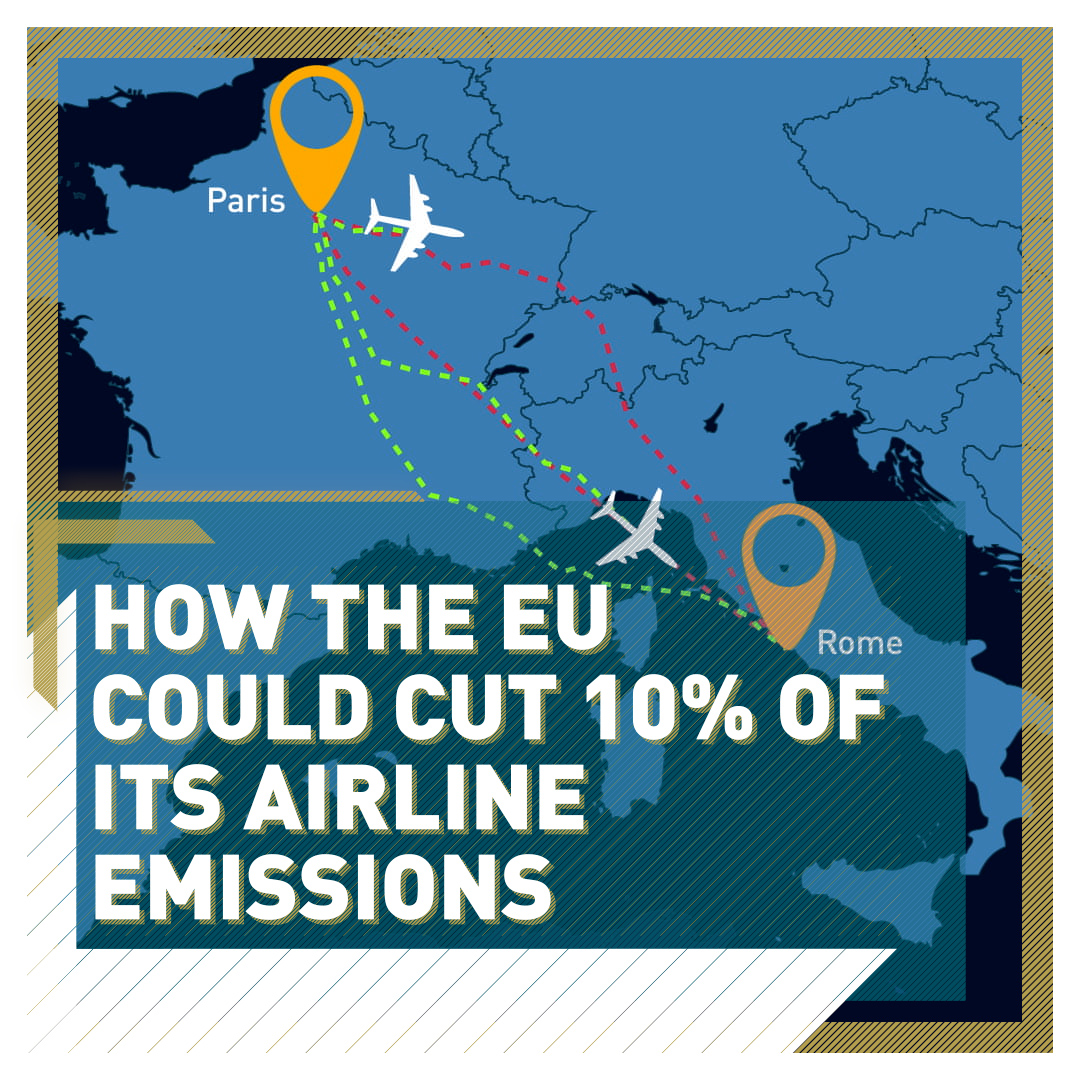 Willie Walsh, director general of the International Air Transport Association (IATA), thinks it's about time authorities intervene to improve the sustainability of the sector.

"This is a scandal. The situation in Europe is incredibly frustrating. It's estimated that airlines are emitting 10 percent more CO2 than they would need to, simply because we don't have an integrated ATC system in Europe, but it has been talked about for years and years," he says.

"And the reason we don't have it is because there's a political hesitancy and the lack of political will to address this." 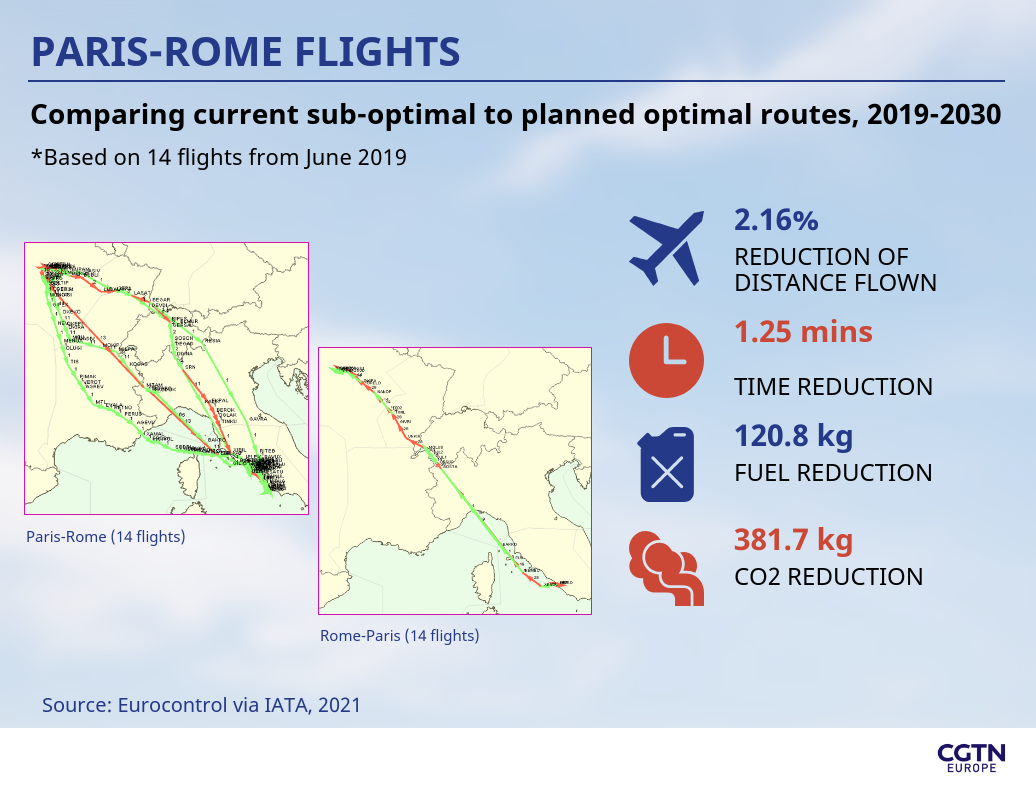 In the EU in 2017, according to the latest data available, direct emissions from the air industry accounted for 3.8 percent of total CO2 emissions.

According to the European Commission, 6 percent of these emissions (equal to 11.6 metric tons of CO2) are due to sub-optimal-trajectory flights, instead of more efficient, sustainable and cost-effective routes.

Asked how many flight trajectories fall under the "sub-optimal" category, Andrew Charlton, managing director of Aviation Advocacy, an independent air transport consultancy, says: "The hardest thing to find is an example of an aircraft trajectory that isn't." 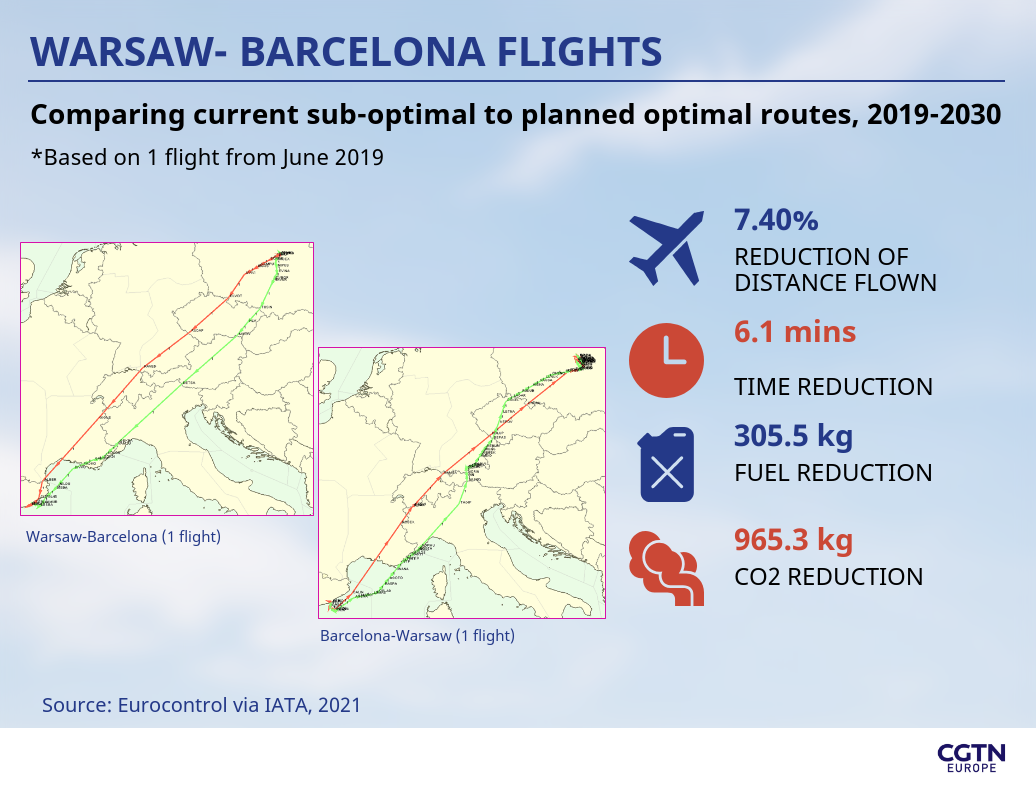 The EU has tried to achieve better air traffic control since at least 2013, when the first proposal was made, but it blamed its initial stalling on disagreements between the UK and Spain over the status of Gibraltar's airport – the European Commission says this is no longer an issue because of Brexit.

According to Charlton, the situation could improve if airlines had an incentive to change and improve their services compared with the competition.

But making the system competitive and more efficient, as well as more sustainable, is complex. According to Charlton, this will involve a change in the technology used by the sector and a revolution within the navigation service providers.

The EU has around 40 navigation service providers in an area approximately as big as Australia, whereas Australia has only one. The issue of sub-optimal airplane trajectories in not unique to Europe, but the problem of dealing with so many countries so close together, and how their national sovereignty interlaces, is what makes the matter so relevant there.

"For nearly 20 years, the political will has been lacking to truly realize and unlock the benefits that the Single European Sky (SES) should deliver," said IATA's Rory Sergison.

"When it comes to ATC, let's be clear, airlines have done their part of the job," he added.

"They have upgraded their onboard equipment systems and are awaiting ANSP [Air Navigation Service Providers] to do the same and for States to connect the dots through the adoption of the SES2+. Without the alignment of the investment plans of airlines, airports and ANSPs, operational benefits will remain elusive and any new ATM [Air Traffic Management] program will not deliver its promised objectives," he said.

Improving air traffic could be as easy as enabling direct trajectories through European skies, avoiding delays and the current zig-zagging through different blocks of airspaces along a route, and preventing aircraft from having to fly at lower altitudes and burning more fuel.

This apparently easy solution to the growing concern of aviation emissions doesn't have an implementation date yet. The proposed update to the Single European Sky regulatory framework made by the Commission will be first submitted to the European Council and the Parliament for deliberations.