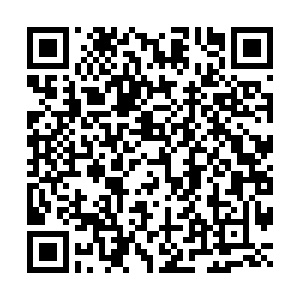 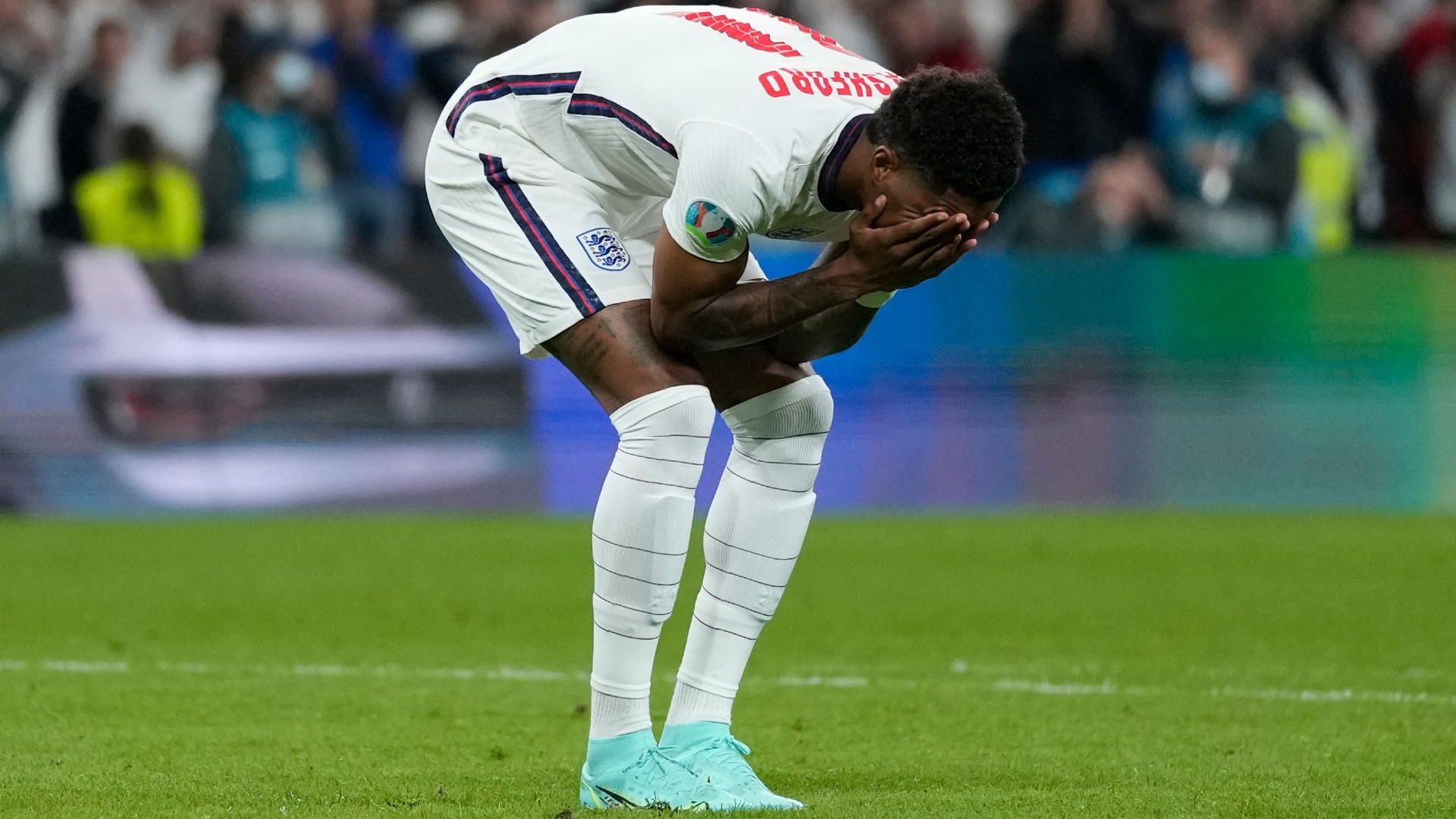 Marcus Rashford was one of the victims of online racist abuse after missing a penalty in the final at Wembley. /Frank Augstein/Reuters

Marcus Rashford was one of the victims of online racist abuse after missing a penalty in the final at Wembley. /Frank Augstein/Reuters

· Three England players were victims of racist online abuse following the defeat to Italy. The social media accounts of Marcus Rashford, Jadon Sancho and Bukayo Saka were flooded with racist comments after they failed to score their spot-kicks in the penalty shootout.

· London's Metropolitan Police has confirmed it will investigate and, in a tweet of its own, said: "This abuse is totally unacceptable, it will not be tolerated."

· UK Prime Minister Boris Johnson and the Duke of Cambridge, Prince William, have joined the Football Association in condemning the racist abuse. Johnson said the abusers 'should crawl back under the rock' from which they had emerged.

· There were 49 arrests made in London for a variety of offenses and the Metropolitan Police confirmed 19 of its officers were injured when confronting "volatile crowds."

· Italy's manager Roberto Mancini commemorated the 3-2 penalty shootout win to the country's supporters. "We are delighted for the Italian public because they really deserve this after what has been a trying period."

· England manager Gareth Southgate shouldered the responsibility for the defeat on penalties, saying: "I said we could have no recriminations. We win and lose together. They've got to walk away from here with their heads held high."

· England's hopes of hosting the 2030 World Cup were put in doubt by video footage of more than 100 supporters who broke into the stadium without tickets or the necessary COVID-19 checks. 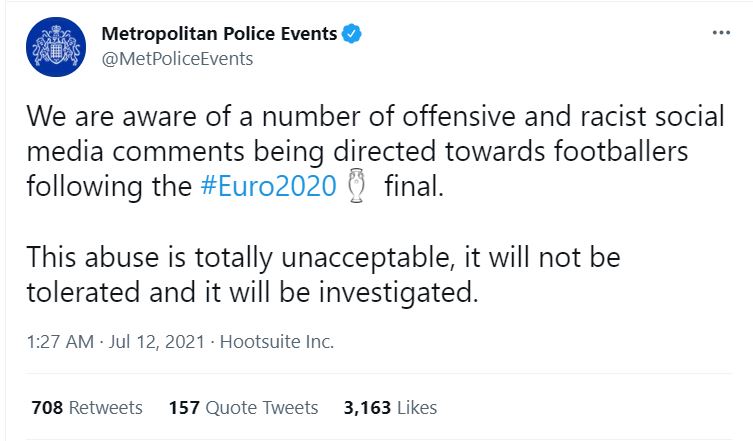 Italy's players are champions of Europe once again in what has been a remarkable turnaround by manager Roberto Mancini. He wasn't even first choice for the job in 2018 when Italy needed a new leader following a disastrous World Cup qualifying campaign that ended with the sacking of Gian Piero Ventura.

Captain Giorgio Chiellini told reporters that when Mancini took over the players thought he was "crazy" to suggest Italy could win Euro 2020, but 39 games later, of which only two have been defeats, Chiellini and his teammates are firm believers in their manager.

Italy named an unchanged team for the final, but it was England under Gareth Southgate who dominated the opening exchanges. Kieran Trippier had been brought into a four-man midfield and it was his cross for Luke Shaw that led to the first goal. Shaw, who had been left out of the first game of the tournament but has been ever-present since, hit a first-time shot that skimmed off the inside of the post to spark wild celebrations from the partizan Wembley crowd.

Italy's run to the final has been impressive and Federico Chiesa has been instrumental in that, so it was no surprise to see him create the first chance for his team by shrugging off the attentions of Declan Rice to flash a shot just wide of the post. 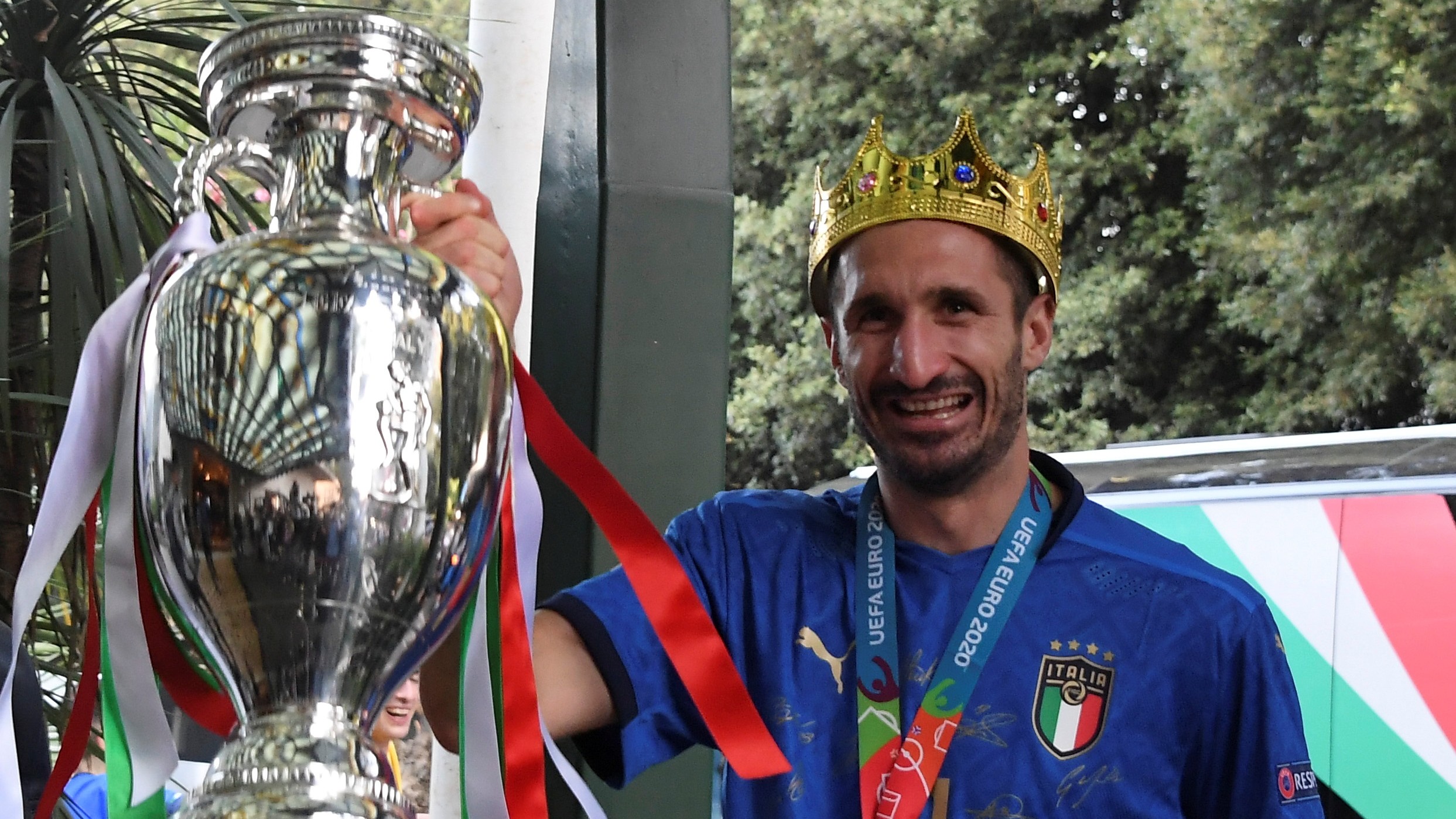 England ended the first half with more clear-cut chances but midway through the second half Italy increased the pressure. Leonardo Bonucci became the oldest player to score in a final when he reacted quickest to Marco Veratti's header that came back off the post.

Italy were lucky not to be down to 10 men when Chiellini hauled Bukayo Saka to the ground just before full-time. The Arsenal midfielder had beaten the veteran defender and had a clear run to the goal, but Chiellini grabbed his collar to prevent the breakaway, an offense that referee Bjorn Kuipers decided only merited a yellow card.

John Stones was millimeters from heading England back in front in extra time and Jordan Pickford managed to get a hand to an Italian cross before Federico Bernardeschi could steer the ball goalward. So the match would have to be decided on penalties.

At 19 years old, playing in his first tournament, Saka has impressed many this summer but Donnarumma saved his penalty to make Italy champions for the first time since 1968.